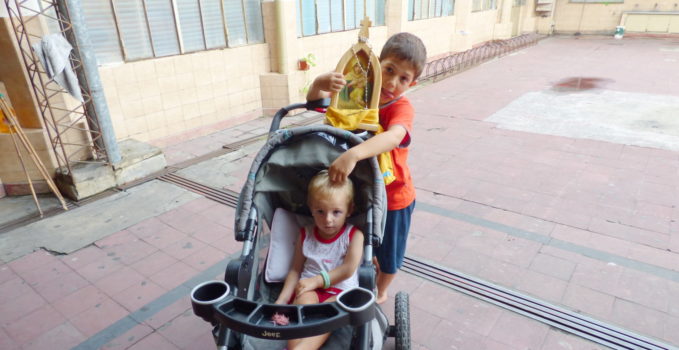 To be a missionary without going on the Family Missions

What are the Family Missions?

A group of couples with their children and other young people go to evangelize as a family and for the families. They give up part of their vacation for this noble apostolic task. Their mission is to take Christ and the Blessed Mother’s word to the families they visit.

Can we be missionaries without going on the Missions?

Yes! Those who do not go to the Missions have accompanied the groups with their prayer, the Rosary and daily Mass for 19 years. With this intention we unite in a Prayer Chain for the success and fruitfulness of this Mission, and for all the Family Missions that will be carried out in different places of Argentina.

We are asked to pray for the Missions during some time of the day, for example, the Holy Rosary, attend Mass, or make some offering for the missionaries. At the end of the mission day, during the night prayer, everyone who has prayed for the missions is mentioned within a profound framework of gratitude and spiritual unity.

If you want to unite spiritually with the Schoenstatt Mission, we ask you let us know at: [email protected]. At the same time we ask you make the Mission known and to include the missionaries in the daily petitions at the Masses during the week of the Mission.

In union with the Mission and united in prayer for the Family Missions we affectionately greet you and wish you a Merry Christmas and Peace for this world.