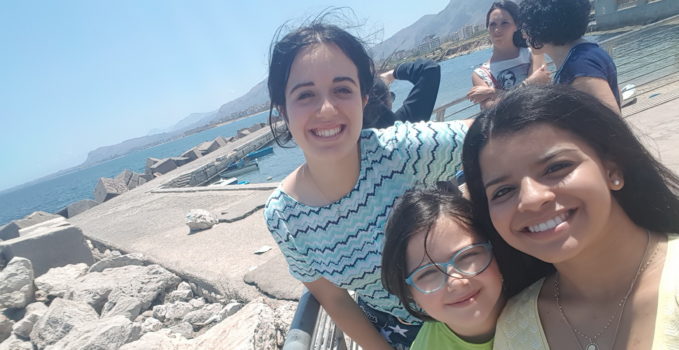 Last Friday, 9 June, the super-energetic Sister Julia and I, a member of the Girls’ Youth in Rome, together with all the girls’ support and of course our loving Mother, left for Palermo. The flight was very short, and we were unaware when we had landed. The first test of our mission was to get a bus that would take us from the airport to the city. Just as we were buying the ticket, the clerk told us the bus was about to leave, and that there were only two seats left! We could not afford to let them leave without us … our afternoon meetings were waiting for us!!! So what to do? Well just the time to put the MTA shrines safely in the bag and set off running for the bus. Our athletic sprint with many suitcases and backpacks was not in vain: we got on the bus that took off seconds after we boarded.

The trip from the airport to the city was short and pleasant; Sicily welcomed us with a shining sun and spectacular sea. When we arrived in Palermo, while we waited for Salvatore, the sweet dad from the family who hosted us for the weekend, to fetch us, we received sustenance in the form of a “small” sandwich of fried squid. There was just enough time to finish this very good sandwich, which small in name only, before we went up by car to Salvo, on our way to Marineo, the little village just a few kilometers from Palermo, where the mission took place. During the journey, we admired the beautiful Sicilian landscape that is dimmed with gold in summer, thanks to the sun’s rays, and our energy recovered a bit. When we came to Salvatore’s home, we were welcomed with great joy and enthusiasm! Sister Julia already knew the family, while I was amazed by their infinite kindness: welcoming us there were: Maria Antonina, supermom of the family, and their daughters, Maria Lucrezia and Maria Cristina, respectively the first Sicilian Girl’s Youth and the first Apostle of Mary. 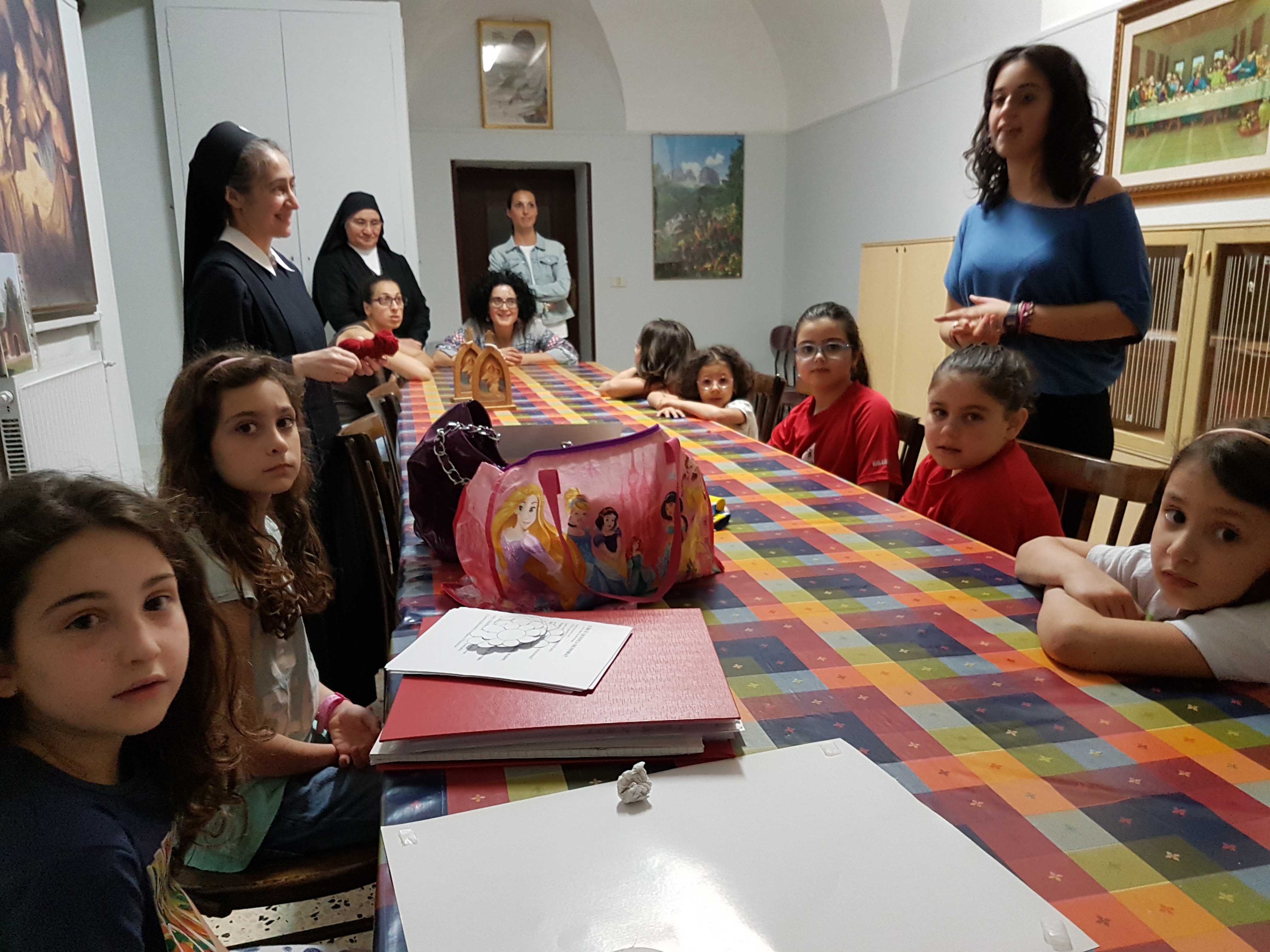 After arranging our stuff and organizing the material for the meetings, we did not waste another minute more either. Armed with our MTA shrines, guitar, smiles, and a great desire to convey Schoenstatt’s message to new generations, beginning with the youngest. In fact, the first encounter we have had with the Apostles of Mary: nine young eight-year-old girls gathered to create a reality that does not yet exist in Italy.

The path of the Apostles of Mary aims to form youths of tomorrow, but most of all teaches to love the Blessed Mother from a tender age. During the meetings they will make during the year, followed by the brilliant Maria Lucrezia and the kind Jenny, the Apostles will discover the importance of having the Blessed Mother’s Love in their lives, will do activities with the purpose of discovering the figure of Mary, and the value in being linked to her both as a single persons or as a group. Goal of their path? Conquer the Apostle Handkerchief that for them represents a piece of the Blessed Mother’s mantle and the desire to continue growing together to become Schoenstatt’s future in Sicily.

The meeting was very beautiful and filled us with satisfaction and hope; the little ones, after a short icebreaker consisting of passing a ball of woolen yarn without following any precise logic so that we could all come back from the same thread, that we held on to and held us together as a true family, they told us their names, ages, and a personal “passion.” The moment was great fun, and it served to make the Apostles feel at their best.  By the time we started talking about Mary, they were completely comfortable. We had made simple questions for them about the Blessed Mother such as:  what is she for them, what are the qualities that she has, and what are the characteristics that they, like her Apostles, would like to have?  The answers were beautiful: Mary is the mother of Jesus; Mary is beautiful, sweet, obedient, strong, good, and sincere. There was also a little Apostle who would like her clothes! In short the little ones really left us astonished. The time together then continued, between songs and recreational activities, between colored cards and many smiles.

Sister Julia and I then headed for the second meeting of the day – the one with the older girls. We found five girls in the company of Cece’, an older girl who will guide them in choosing the path they want to take in the parish as catechists or as members of other youth groups, waiting for us. We wanted to explain to them what Schoenstatt’s Girls’ Youth is and above all what it means to be part of it. Although we did not have much time available, it was very nice for us to share with them the time and to convey to them the wealth that Rome’s Girls’ Youth experienced in the meetings. The girls listened to us fascinated and very interested; they already knew the Blessed Mother, thanks to the Schoenstatt Pilgrim’s Campaign, and so we invited them to create a new bond with her.

We do not know how well and when the Sicilian Girls’ Youth will start; one thing is certain, the Blessed Mother has made sure that the seed for this feminine reality has been planted, and just as one of the girls said, if we could meet, it was not just a destiny but something bigger and more special! We have been in touch with them and as soon as this year’s activities end, new energies can be made available to our project … Who knows what the Blessed Mother will reserve for the future? We have been entrusted to her. A family mission! Friday continued to be a time of sharing and happiness, greetings and new acquaintances, interspersed with delicious desserts and dinners! Saturday morning the family who welcomed us took us to visit Palermo, while in the afternoon, we ventured to discover the natural beauty that the areas near Marineo offer. In the evening, we had a beautiful and constructive encounter with missionary families of the Pilgrim Mother Campaign, Father Marcelo, Rector of Belmonte, and Don Leo, Marineo parish priest. After a rich Sicilian dinner, it was very nice to talk about the various present and future projects. The Blessed Mother is greatly loved in Sicily, the Movement is well rooted, and it was really amazing to see how many people have placed themselves at her full disposal, loving her and following her designs. Older ones and children forming a real family: how much love and enthusiasm for our MTA! 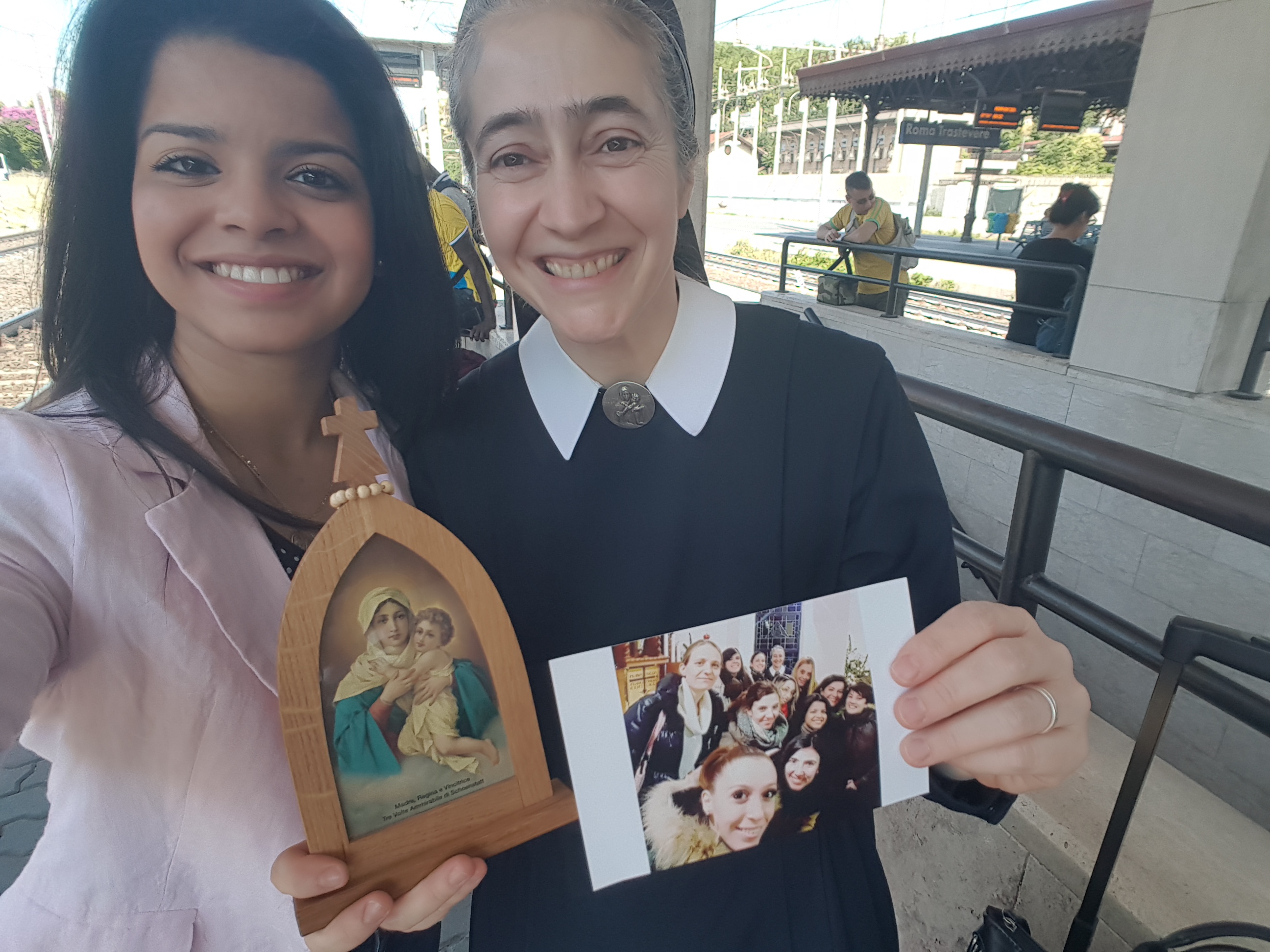 A Sunday of Schoenstatt training

The last day of mission was very full but at the same time gave us many positive emotions and filled our soul with joy. While Father Marcelo held the family training meeting, Sister Julia and I dedicated ourselves to the young. We did not know how to handle a mixed group with boys and girls of different ages, but we entrusted it all to Mother, and the encounter was wonderful. With them, in order to break the ice, we played the game of the thread and after we introduced ourselves we tried to think together some simple questions which, however, gave birth to an unexpectedly deep reflection, especially for the younger ones who were only 10 years old! The questions we put to them were written on the signs pointing to different directions: How? When? Who? How much? What?

These are simple questions, yes, but answering them is not that easy. The boys, however,  said very beautiful things; Their spontaneous responses made both of us think. “How do I behave in the family?”, “How often do I go to church?”, “Who am I? Who will I be? “,” How many times a day do I pray? “,” What does God want from me? “,” Where am I going? “. These are just a few examples but they all gave their thoughts freely, and we were able to capture all their creativity and inner richness. Afterwards, we asked them to tell us what they would choose between a pair of mountain boots, a symbol of adventure, action and movement, and a chair symbolizing a couch and therefore immobility, laziness, and ample comfort. What prompted us to ask such a question to young people was the talk that Pope Francis did to the WYD in Krakow: “Careful to the Sofa-Happiness, that is a paralysis that ruins youth.” Following in the footsteps of Pope Francis we have tried to make young people understand how dangerous they can become that couch they all love and desire. The alternative to the comfortable sofa? Well simple, the boots! We wanted to send them the message of the Pontiff to help them deal with life with all the energy they have in their bodies, with their joy, with their hopes and their desires. One thing in particular we said to him: Jesus and Mother have called them to leave their mark in life and history! I did not have to repeat it, in fact, the activity we did at the end of our meeting was that to leave the imprints of their hands smeared with colour on the cards we brought to the Shrine, along with their Offers to the Capital of Gratitude. Between practicing for singing and some group play, the boys also prepared the prayers of the faithful and a brief summary of the meeting that could be told at the end of the Mass to their parents. The day has continued in the joy of family lunch, sun-kissed and protected by the maternal look of the Mother who has watched over all of us.

Our Mission’s Mariathon was really intense and full of satisfaction. I could write for hours and still I could not convey the happiness we experienced in talking to so many people and even sharing a few minutes with young people willing to embark on the journey of Christ and Mary, and adults who are making so much effort to attract more and more people to work together for the Movement’s growth.

We returned to Rome very happy and full of hope; we sowed seed on a fertile land; the Roman Girls’ Youth will continue to pray for a young, strong and vigorous reality in the service of the Blessed Mother– You are the Great Missionary, you will do miracles! 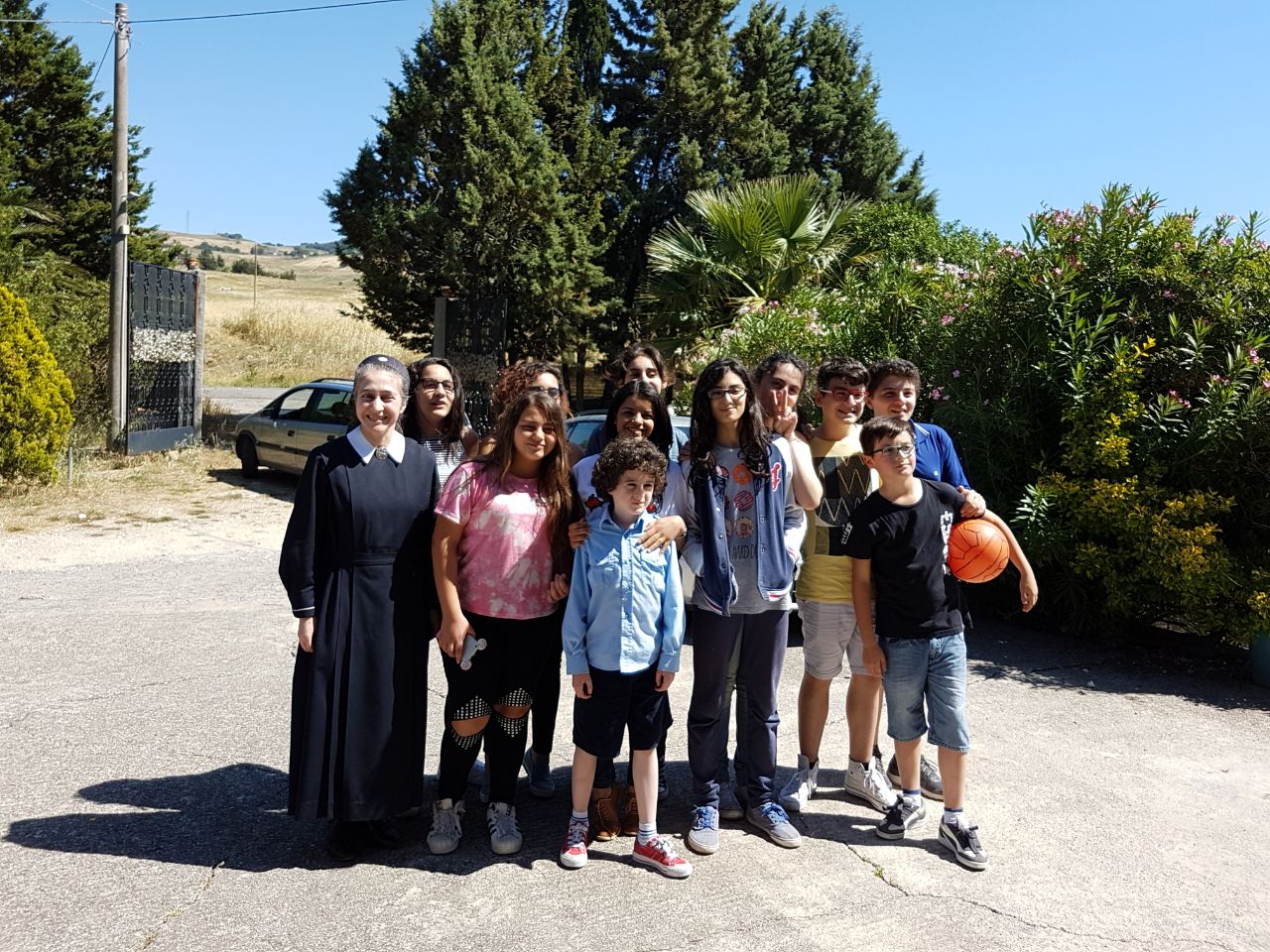