“Missionary Generation with Mary: Christ or nothing!”

“Missionary Generation With Mary: Christ or nothing!” was the motto enkindling close to 100 young people from Paraná’s different cities to go out on mission and to leave a little of Christ’s love in homes and communities. They gathered at Cornélio Procópio on the afternoon of Friday 13th, for the second pre-mission, organized by the priests. It was full of advice designed to help everything go well on one more mission. Shortly afterwards, at 5:00 p.m. Mass was celebrated as was the moment of sending forth, where each mission meet his peer. This year Abatiá, approximately 60 km from Cornelio Procópio, was the city chosen. From the moment they arrived, they showed great joy when the Boys’ Youth was welcomed there. Several members of the community waited for the missionaries in front of the parish to welcome them and to offer them an appetizer. Every community went to the school, where they would spend eight days of great unity and giving of self.

On Saturday, they had a retreat with the advisers to reflect on the week to come and to enter into the spirit of the mission. With hearts motivated to act, they went out during the afternoon for the first home visit. Over two days as the missionaries obtained more experience, the homes also became more receptive.

Mary was the center of the 2017 Christ Tabor Mission

The chapel, the community’s most important place, began to shelter very strong spiritual moments. Lucas Braga, one of the spiritual leaders, commented a little about the preparation for those moments, “As we began to prepare the 2017 Christ Tabor Mission’s spirituality, we faced the difficulty of not doing more of the same, we tried to change many of the dynamics and experiences. This was not only the Paraná region’s desire but also the spirit of Jumas Brazil.  The main idea was always to try to surprise the missionaries, to do something they did not expect.” As the motto states, Mary was the center of 2017 CTM  (2017Christ Tabor Mission). Lucas reinforced the reason: “The decision for Mary to be the central element of the missions was an easy decision, because it is the Jubilee year dedicated to her established by the CNBB (National Conference of Brazilian Bishops). However, now we had to speak about Mary in a different way, whether we liked it or not, the spirituality of the missions has always been Marian. Departing from this, the Paraná region decided to look for points of view beyond Schoenstatt to prepare for the experiences, in order not to repeat what had been already said several times,” he added. Unfortunately, we could not change much of the spiritual structure of the missions, but I hope that the results were good. Of course, this depended a lot on the experience of every missionary. For me, it was a very remarkable mission, because I could go even deeper in the missionary spirit. Of course, we cannot forget that the final spiritual result was only possible thanks to the Paraná region’s entire Secretariat Team, the advisers and above all, to the care of the Mother of God, who is always guiding so that everything goes according to her Son’s will.”

As it is already tradition, during the week there were two special nights: Missionary Night and Youth Night. During the first one, there was a dinner followed by another hour that was more relaxed, when the community presented a gift to another, and it ended with a strong spiritual moment. The second one was a large celebration of the missionaries for the community.  It began with several lively songs, and it also ended with Adoration, recalling the two great characteristics of the CTM: joy and love of Christ.

The Mission is renewed

Just as it has happened for some years, the Mission was greatly renewed in the relationship of the missionaries.  This year, almost half of them participated for the first time. Paulo Henrique Rigon’s testimony gives a good picture of how the boys felt about the first experience: “At first, I was eager to go, but feeling like I would not get used to to my community of peers to say nothing about the homes. However on the first day, I was well received in the community as well as in the city. It was fun to wake up every day alongside great people and to know that I could make a difference for someone who only needed someone to listen to him/her. Another good thing about the missions was the proximity that one has with the people who stay in their community to the point that, when I go home, I will miss waking at 7 AM. What can I say about the experiences, one was always better than the other! They were always very touching and it made think about how small we are.”

Thiago José, Luis Fernando Funari and Renan Aprígio were the three leaders for the missions carried out in Abatiá. They were the ones with the help of the Central Committee, who made everything turn out in the best possible way. Of course, it took great effort, besides the dedication and strength of the community that helped the missionaries. Thiago, general coordinator, explained how the city for the mission was chosen: “It could not have been better. They were days of tension until we defined the city that we would work in, and as coordinator of these missions, I suffered even more with all that uncertainty. But then, the Mother of God was there and as always, she showed us that we should not worry, that everything is in God’s plan and from nothing she makes everything adequate so that the missions were carried out in the city of Abatiá.” He concluded: “I could sincerely say that we have never seen such a large and loving welcome by the people who helped us directly, as well as, the people’s reception into their homes, they always welcomed us with doors open to truth, with a smile on their face and the joy of being there. Thus the word now, after the mission, is gratitude, there is no better word. Gratitude to God and the Mother once again for showing trust that everything would go well – gratitude to all the missionaries, especially those from the central committee, who were so committed to the success of these missions, and gratitude to the entire Abatiá community that gave a real spectacle, thanks again.”

After all those days, the missionaries returned home with the feeling of having left everything they could in Abatiá, but now the mission continues daily, in the small and larger attitudes of each one’s personal life. 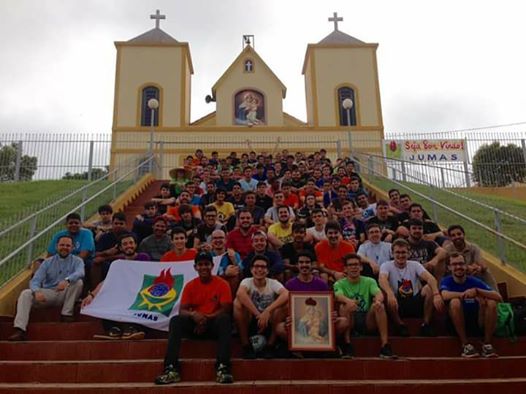