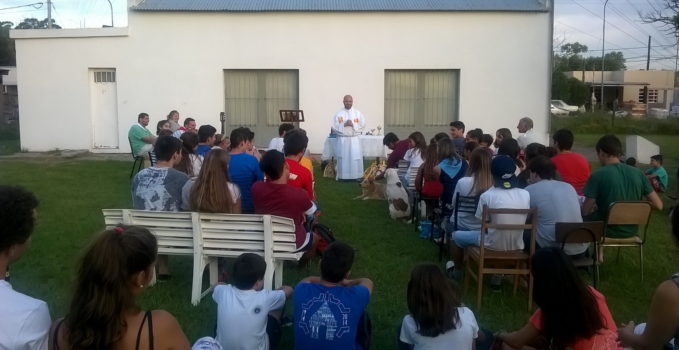 Come be part of Family Missions 2017!

It is only three weeks until the start of La Plata’s Family Missions of the Schoenstatt Movement. This time, they will travel 80 km from La Plata to Ranchos, an area of only 8,000 residents in the Buenos Aires’ Province that will welcome these missionary families for the first time, from 22 to 29 January 2017. Fr. Alejandro Zelaya, a Schoenstatt Diocesan Priest and two couples will also go as observers to learn about the Family Missions, to encourage more Fr. Alejandro’s parish families in Lanús (Province of Buenos Aires).

Every year a couples’ group along with their children and other young people from La Plata and surrounding areas go on mission as a Family for Families, giving part of their vacation time for this noble apostolic task. Their mission is to take Christ’s and the Blessed Mother’s word to the families they visit.

Praying for, sharing about, or making offerings also is a way to mission

Moreover for eighteen years, those who have not physically gone on a mission have accompanied them from their homes, wayside shrines or shrines with the prayer of the Rosary or daily Mass.  Many people in La Plata, in all of Argentina, and thanks to an invitation from schoentatt.org from the five continents, unite in a prayer chain for the success and fruitfulness of this Mission and for all the Family Missions carried out during these dates in different places of Argentina.

Sometime during the day, we ask that you pray for the Missions: for example, a Holy Rosary, attend Mass or any offering that one wants to make for the missionaries. At the end of the mission day, during Night Prayer, everyone who has prayed for the missions is mentioned, in a profound framework of gratitude and spiritual unity.

Another way to be part of the mission is to share this initiative within the Schoenstatt Movement’s groups and branches, and if possible, in the daily intentions of the Masses during the week of mission.

Whoever wants to unite spiritually with Schoenstatt Missions 2017, can notify Lilita and Carlos Ricciardi: [email protected]