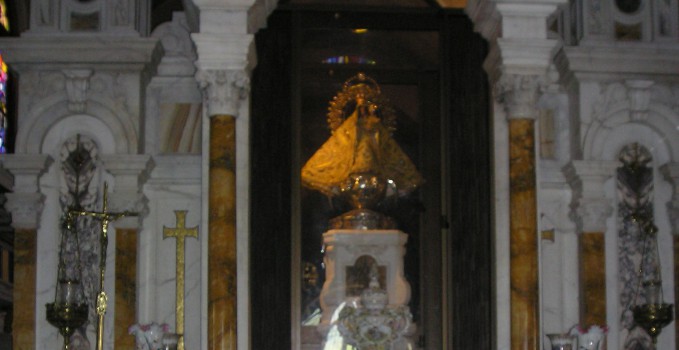 CUBA, by Juan Vicente and Juan Manuel, missionaries at Cuba •

Schoenstatt began at Cuba with the first generation of Misión Cuba [Mission Cuba] approximately 10 – 15 years ago. 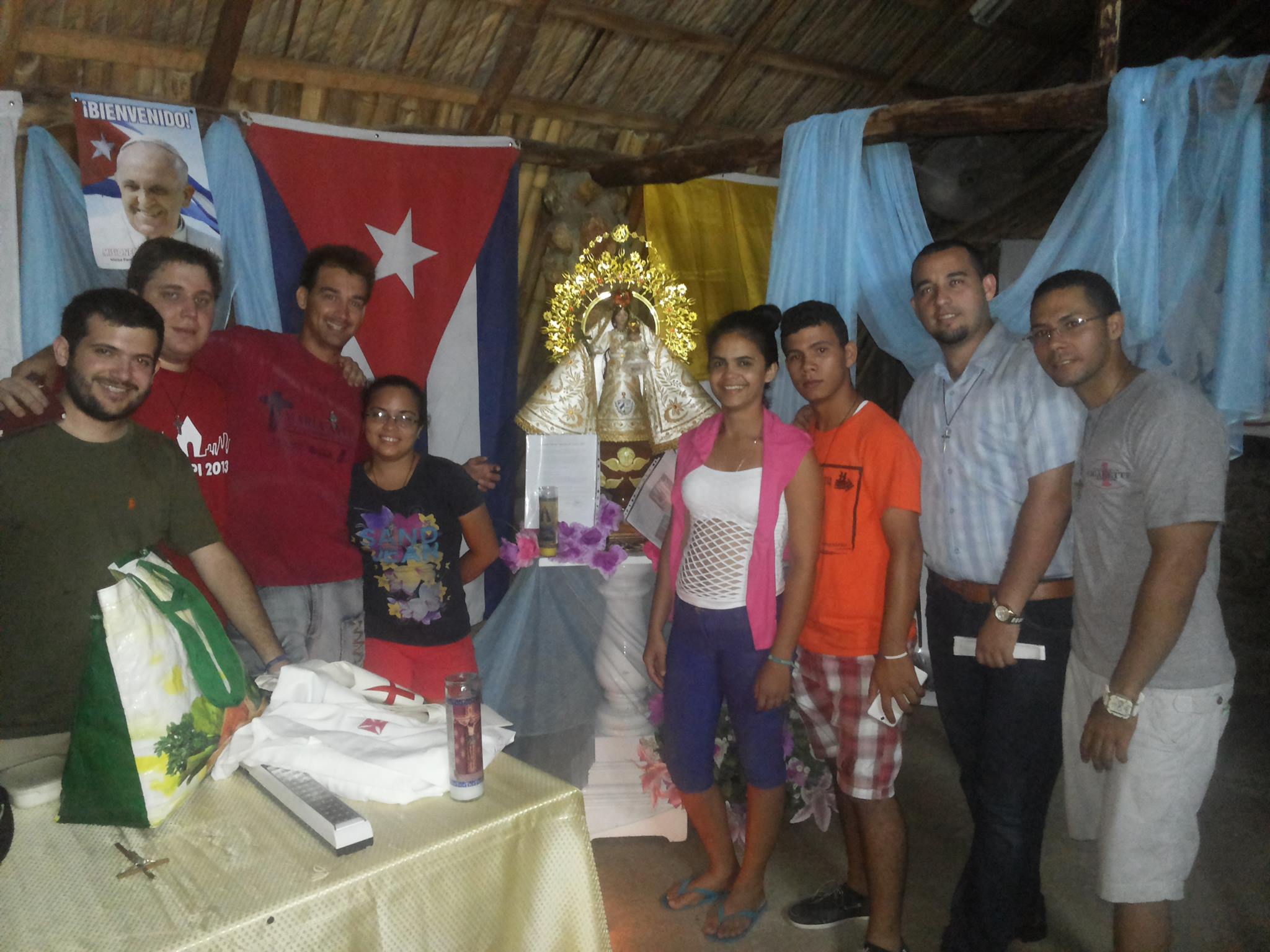 We certainly have traveled. In the last report, we mentioned we would depart for an adventure to learn about Maisí, the eastern part and poorest area of the island of Cuba. The fame of the island’s eastern province is important: from Santiago, the first capital, passing through Bayamo, where the struggle for independence began, to Maisí, a wonderful area of mountains, red soil, vibrant green vegetation, and a bright blue sky.

But first things first, prior to going to Oriente, we traveled by bus to Havana to obtain our residence, we bid farewell to Fr. Bladimir, who was departing for a month to Chile for the international Federation Priests’ gathering. Then we were on the way to visit the Cuban capital, which we had not had the good fortune of knowing. The stay was fantastic; we stayed at a very nice home for priests, and during the day, our base of operations was a house that was steps away from Havana’s baroque Cathedral. We traveled through the city for three days, and we saw beautiful and ugly things. Its façade is very beautiful, joyful and lively, but it masks or hides a sadder and darker reality. 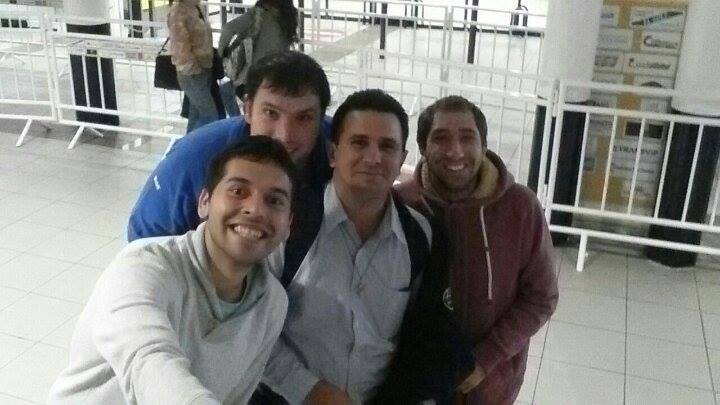 With Fr. Rolando to Oriente

Now returning to the story of our trip to Maisí from Havana, we traveled to Camagüey, and there we met Fr. Rolando, a Schoenstatt diocesan priest, who took us in his truck (which only worked when it was pushed) and we departed for Oriente. We passed through Guantánamo, and we arrived at a place called Rio Seco, where we shared and spent the night with a very affectionate family. It was very close to the beach. The following day, along with Yoni, Fr.’s chauffer (we stayed at his house), we finally arrived at Sabana, the city where the Maisí parish is located.

How can we explain Maisí… it is what one would call a mission, an intense mission. We visited (at least) one or two communities everyday, and beginning on Wednesdays, we began to review the Gospel and the Sunday Masses, OOF! We traveled through rivers, gorges, pools, sea caves, red soil, but most of all we received the kindness of the people, who, although they were very poor, were extremely generous. We also visited Baracoa, Cuba’s first settlement.

After the stay at Maisí, we went to the training gathering of the priests at El Cobre, where we joined with and shared with many priests and especially with the Virgen de la Caridad [Virgin of Charity], whose image presided throughout our visit through the mountainous shrine.   Fr. Rolando and Juan Miguel made a leaflet about the patronage of the Virgen de la Caridad at Cuba, and a poster about the Marian Jubilee during the Year of Mercy, which was a beautiful contribution of Mission Cuba to the Cuban Church. 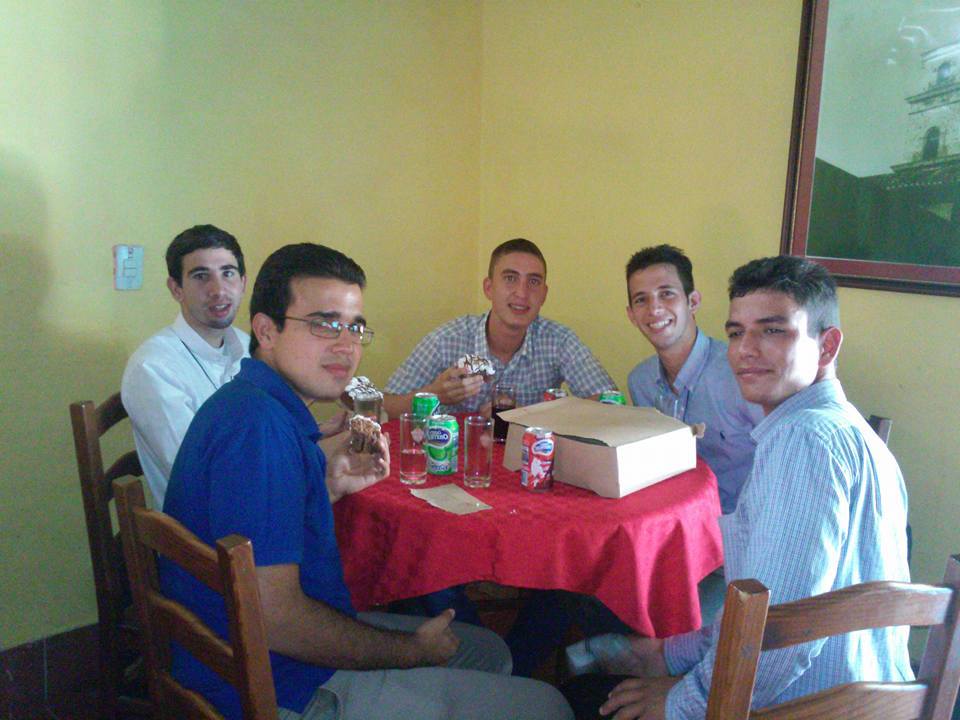 In the seminary in La Habana, with Fr. José Gabriel

After this adventure that lasted almost three weeks, we traveled with two priests to Camagüey, passing through Bayamo, where we met the bishop, who had been ill recently. When we finally arrived at Santa Cruz, a parish waited for us, whose priest had not returned, so we worked arm in arm with the Laurita Sisters. We helped them with their apostolate, with the celebrations and gatherings. It was two weeks of painstaking mission, and finally Fr. Bladimir returned from Chile after a month and a half.

However before his return, we celebrated Juan Miguel’s birthday, and once again we were surprised by the Cubans’ generosity and joy. When we awoke, they were roasting a pork leg on a spit for lunch, and they organized a celebration that kept us dancing all morning. It is important to mention the gift that Roberto, an elderly and poor man, gave Juan Miguel, which was a beer that cost at least 1/20 of his monthly income… what generosity! Also Lilita, a young apostle (a Schoenstatt girl), organized a small surprise. She asked her mother to bake a cake and to make bread and pasta. She gathered the youths from the parish to celebrate the birthday, which was impressive. 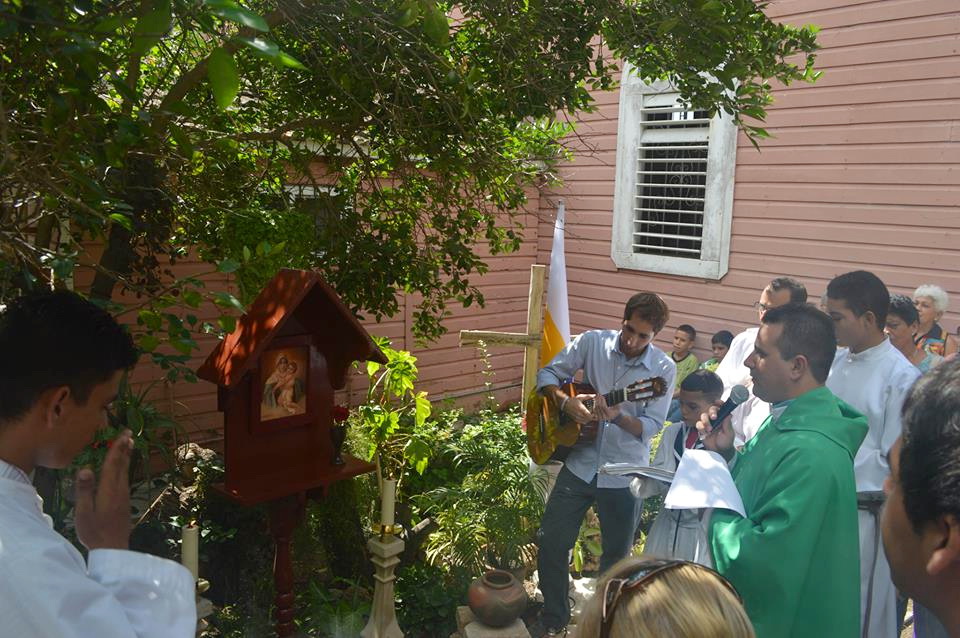 We will return soon…

The last days were during a carnival, during which Juan Vicente demonstrated his talent as a dancer, learning the Cuban dance steps of ‘casino’ and other dances. The town was paralyzed for three days, and we saw the Krewes and the floats with the parish. We celebrated with a singer named JG, who is very popular here in Santa Cruz. We danced, and we even got on a mechanical game called “El Bamboleo” [swaying machine]. Charlie was very dizzy.

Now, only a little over a month of mission remains, which we hope to close on a high note. Christmas is near, with its gigantic Bethlehems and Posadas [the reenacting of Joseph and Mary seeking shelter], New Year’s, and another trip to El Cobre to visit the Virgen de la Caridad. We can “smell the plane” as they say here: soon we will return to Chile. 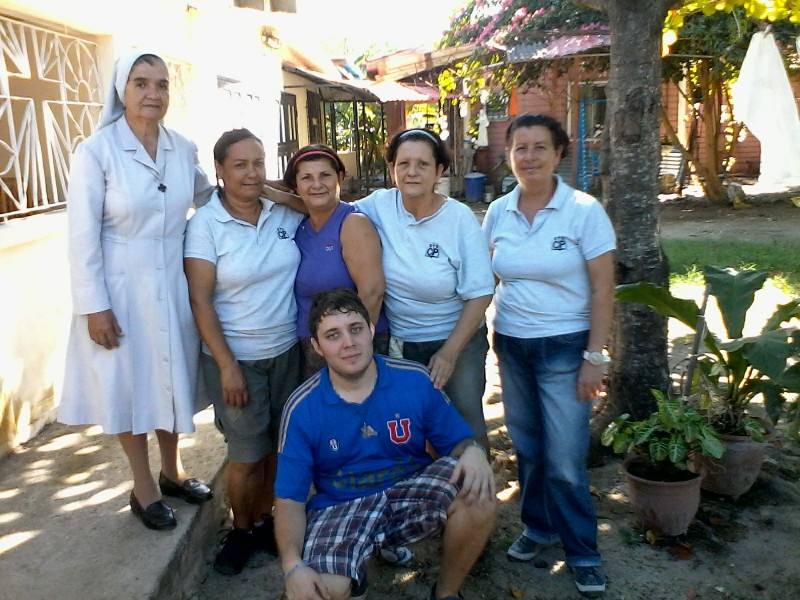