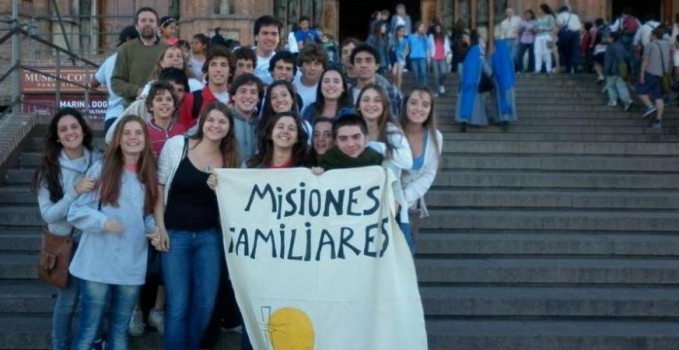 Family missions at the “City of Mercy”

ARGENTINA, by Carlos and Lilita Ricciardi •

The Argentinean Marian Family Missions of the Schoenstatt Apostolic Movement will be carried out during the Year of Mercy from 24-31 January 2016, in Magdalena, Province of Buenos Aires, which is called the City of Mercy.

The first “Divine Mercy City” is located in the Magdalena area. St. John Paul II (The mercy and family Pope) declared the world’s first one, thanks to the efforts of Bishop Ángel Diamante DÂuro, the pastor, at that time, of St. Mary Magdalene Parish. A replica of the original picture of the Merciful Jesus, painted in 1934, by Eugenio Kazimrowski, at Vilna, according to St. Faustina Kowalska’s descriptions, is venerated there.

On mission as a family for families

A group of couples with their children, along with youths from La Plata and surrounding areas, some uncles and a “young” 76-year-old grandfather, will go on mission, as a family for families. They will spend part of their vacation time for this noble apostolic task. Its mission is to take Christ’s Word and the Blessed Mother to Magdalena’s families.

A network of prayer

Those who do not go on mission physically accompany them with prayer, the rosary, and daily Mass. For the success and fruitfulness of this mission and all missions that are carried out during this time at different places of the country, a prayer network is organized in Argentina as well as other countries. We ask that you pray for the Missions at some time during the day, for example, when praying the Rosary, participating in Holy Mass, or whatever you want to offer for the missionaries.

Everyone who has offered to pray for these missions will be mentioned during night prayer after the mission day, within the context of profound gratitude and spiritual unity.

At the same, we ask that this petition be included as part of the daily intentions at Masses during Mission week.