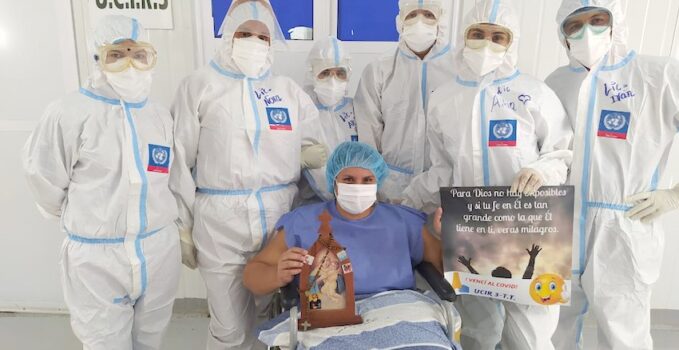 Diego is support staff and was captured while carrying the Blessed Mother in his arms. “The image belonged to my grandmother,” he told the newspaper Crónica. —

The newspaper “Crónica” has just published the following testimony of Diego Riquelme, a missionary of the Pilgrim Mother among COVID-19 patients.

His face expresses tiredness while his eyes move away in the horizon after witnessing so much pain.

But in his hands he carries the strength, not only his own, but also that of all those who undertake the battle against the corona virus. Diego Riquelme, support staff in the respiratory block of the National Hospital of Itauguá, went viral for a photo where he is seen carrying some things in one hand while in the other he raises the hope of those who are in the war against the disease that has already caused thousands of deaths in the world.

“She is the Schoenstatt Pilgrim Mother. The image of the Pilgrim Mother belonged to my grandmother, she gave it to my mother and my mother gave it to me. She is a pilgrim MTA and I always take her to the hospital. I had her in the room because my relative was there, but my family member had to go into intensive care and you cannot bring many things in there, that is why I took her in my arms”, Diego told to the Newspaper Crónica.

Beyond that moment that was captured by a camera, Diego assured that the Blessed Mother is quite mighty, since in addition to taking care of his relative, she also takes care of his companions and all the people who come to the hospital due to complications from the covid-19.

“Through prayer, many were able to get better, like my relative. I was able to see how several people were able to overcome the worst stages of the disease by putting their faith in her. Some came out of the ICU after praying to her,” mentioned the worker in white. Diego explained that the battle is increasingly complicated, but with faith in her many manage to overcome it.

He welcomes patients and their families with faith 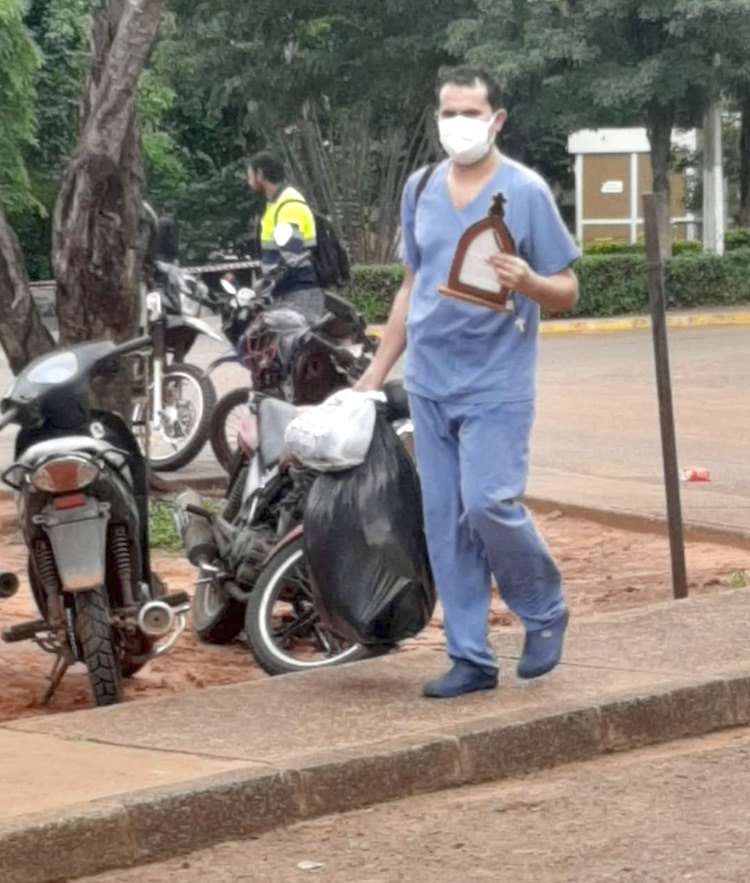 Diego has been working as a stretcher-bearer at the National Hospital for at least a year and a half and he said that in his job he has seen the worst faces of the darn virus. “Every day we receive people with covid in very serious conditions. Then we also assist family members who are desperate because they know what this disease can cause”, said the staff member.

He explained that from that first moment he closes his eyes and raises some prayers for the sick people who are arriving so that they can leave the hospital safe and sound. “It’s amazing how people who really believe make real progress. This is what keeps us fighting,” said the young professional.

His relative showed great improvement after bringing the Pilgrim Mother

In spite of the anguish that runs through the corridors of the hospital, Diego assures that he takes advantage of every breath to dedicate his words to the Virgin, who watches over the health of his relative.

“I can say that my relative was in a very bad condition, but in the last few days the patient began to show improvement. Experiencing all that is very special to me, considering everything that is happening right now,” he detailed.

Diego assured that he would keep his Pilgrim Mother in the hospital until the Covid 19 agony comes to an end.

“Faith is very important when we live through these situations. It helps to strengthen the soul and that is what we are trying to achieve with the patients, that they feel protected, both by the Virgin and by us,” he also said.

Source: http://www.cronica.com.py/. Published with the authorization of the director of the newspaper Crónica.