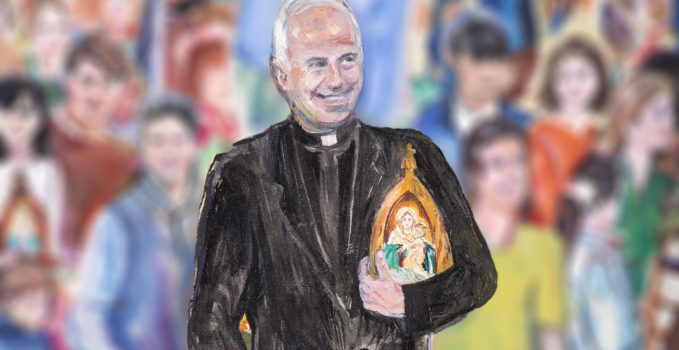 On Friday, October 12th, Feast of Our Lady of Pilar, we remembered the twenty years since Fr. Esteban J. Uriburu’s departure to the house of the Father. Besides the members of his family, many of Fr. Esteban’s spiritual children came to remember him in the Eucharist Fr. Guillermo Carmona celebrated in the Basilica Nuestra Senora del Socorro. Fr. Esteban Uriburu was baptized and began his first steps in the faith in this parish located in the center of Buenos Aires.—

It is difficult to express in simple words the experience that was experienced during Mass. People that worked closely with him in every project he initiated, couples that accompanied him in his “madness” (as many described Fr. Esteban’s brilliant ideas), or simply people that did not know him but today participate in one of the works he founded. Everyone smiled or nodded their heads when Fr. Esteban was described. At the end of the Mass, one of his sisters commented, “You made me discover an Esteban that I did not know through the many things my brother did.” 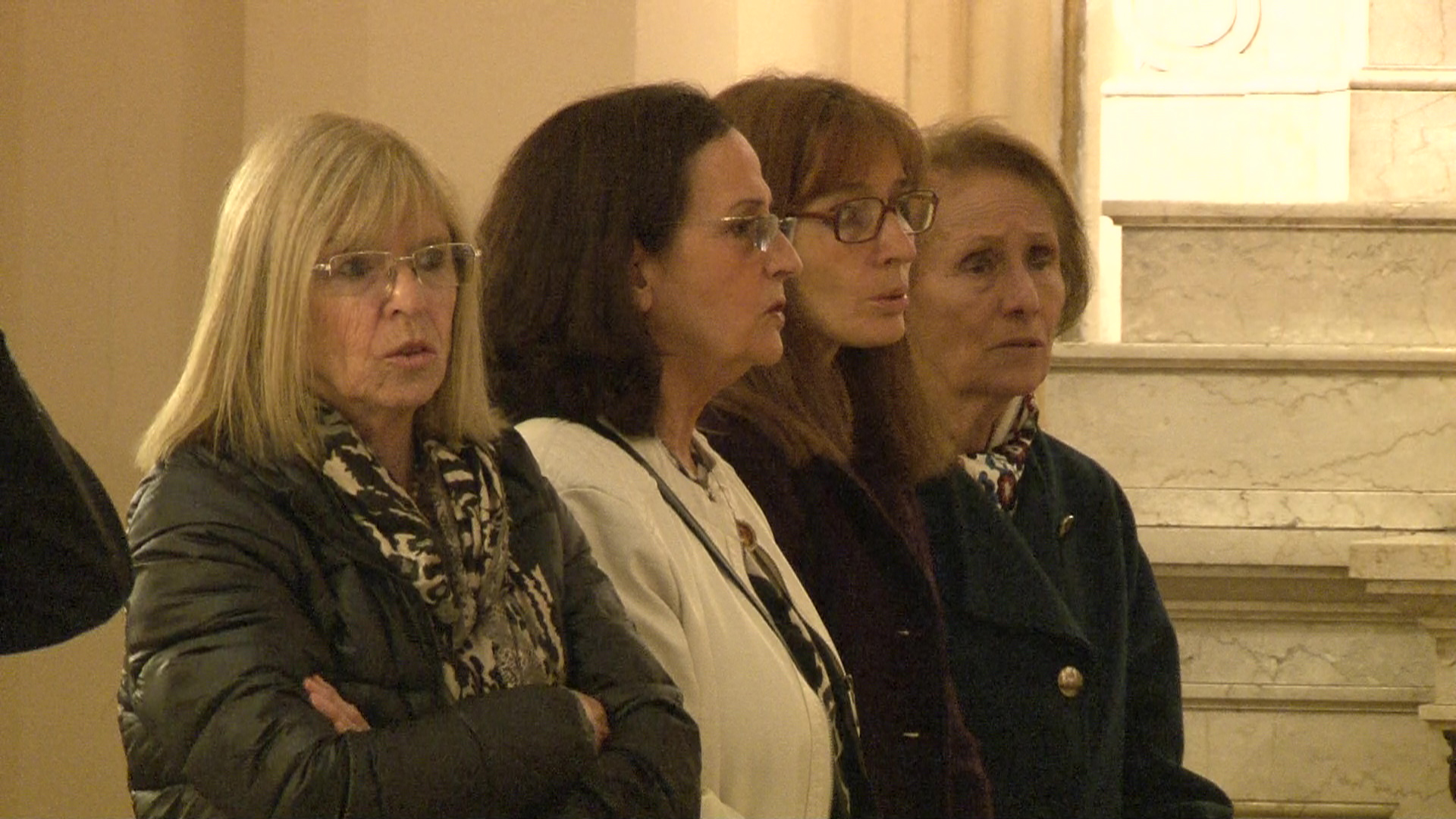 During the homily, the celebrant, Fr. Guillermo Carmona, invited us to give thanks for Fr. Esteban’s life and legacy. He expressed how in his life he gave himself to a great Visitation of the Blessed Mother and the gift of the joy of her Magnificat. As his course brother, he shared many experiences from the seminary years and then about his priestly life in the Schoenstatt Fathers’ community. His words described the image that all of us who knew Esteban Uriburu have engraved in our hearts from our personal experience with him.

Fr. Carmona mentioned some of his personality traits: his adventurous enthusiasm for the big things that empowered him to get out of himself with magnanimity to the world, without fear of the challenges of the history, and the reason Fr. Kentenich called him the “new Christopher Columbus.” In addition, his openness to the world of grace and his giving of self with total confidence to Mary’s heart, to her loyalty to the Covenant of Love.

He was a person capable of enkindling the light in the night of history. He always brought joy and not sadness to this world, being loyal to his personal ideal, to be “Marian Light of the mercy and victory of the Father.”  He stressed his social awareness, his commitment to the needy that are reflected in the concrete apostolic works that he left such as “Joseph Kentenich’s Children’s Home” and “St. Joseph’s Workshop,” in Florencio Varela. 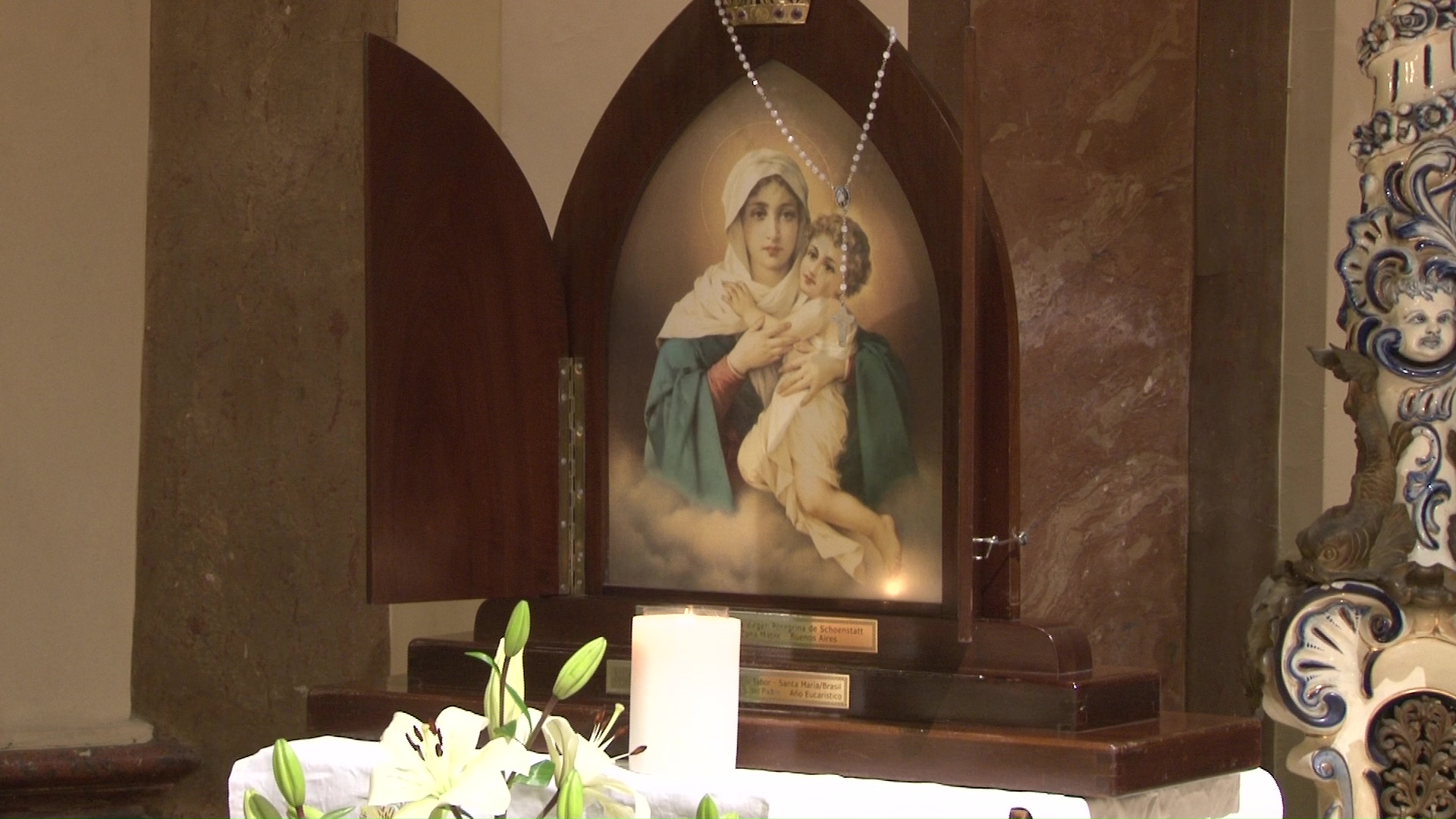 He found the mission of his life in João Pozzobon

An event marked his life and led him to find the mission of his life: the encounter with the person and the work of João Luiz Pozzobon. Departing from there, he affirmed that he had found his mission to the end of his days and that was how it was. In the Schoenstatt Rosary Campaign, Fr. Esteban saw the way to “leave the confines and go out to the periphery.”

Many apostolic Works flourished from Fr. Esteban’s attentive listening. He sought to perceive God’s voice in the deepest desires of the hearts, and he encouraged them and helped them to develop. At the offertory, representatives from these apostolic works that were inspired and encouraged by Fr. Esteban, took offerings that alluded to them:

His total giving of self in a candle

The last offering was very touching: one of his sisters took a lighted candle representing Fr. Esteban’s total giving of self to God, which began in this parish where he was remembered upon receiving Christ’s light on the day of his baptismal covenant, and which grew through his Covenant of Love throughout his entire life even embracing his illness and death uniting it to Jesus’ redemptive sacrifice.

After the final blessing, the representatives from the apostolic works exited in procession with their respective banners, singing the Schoenstatt Family Hymn played by a musical band, like the ones that Fr. Esteban liked so much. 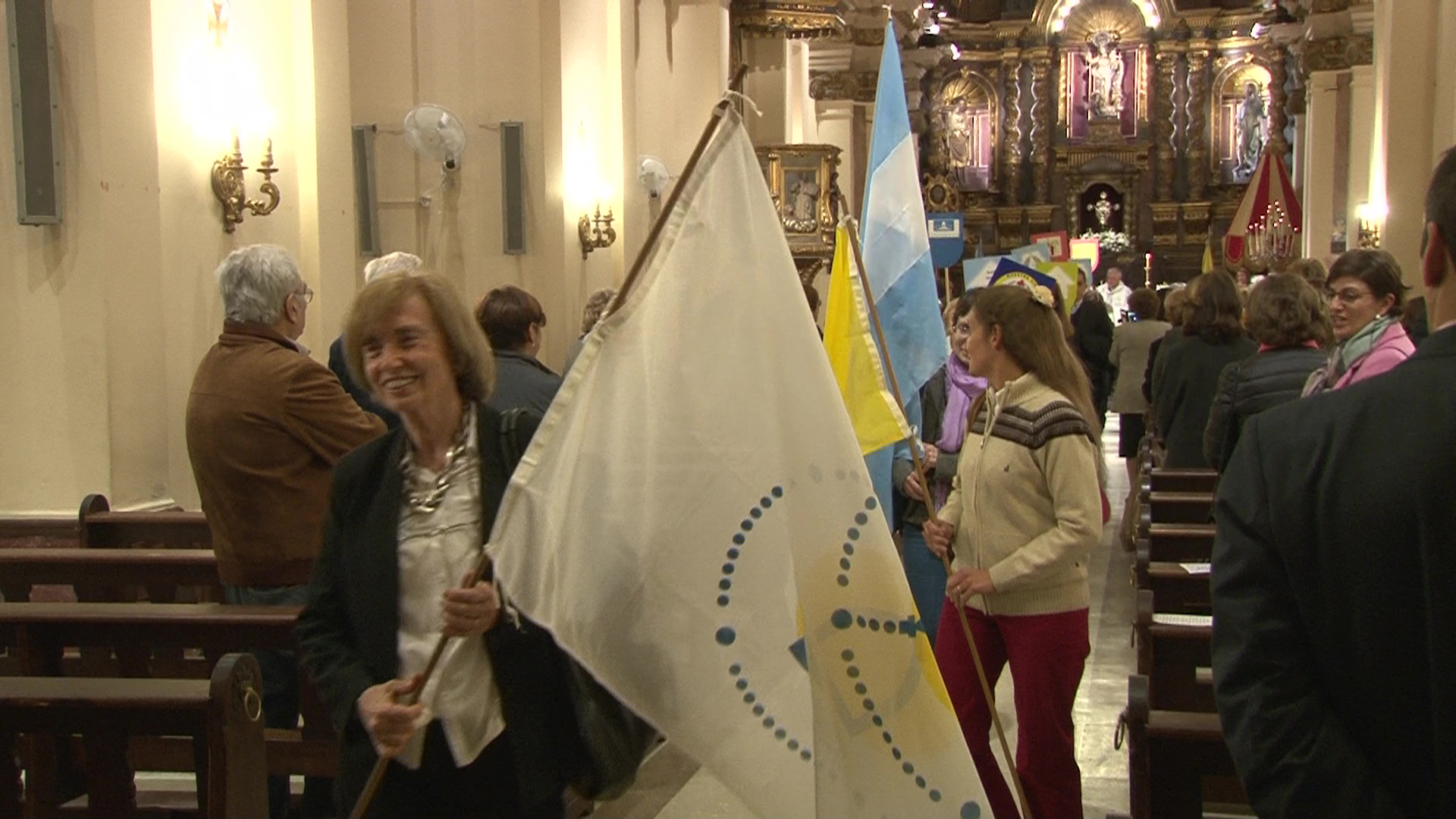 Mary made him her prophet and she gave him a mission

Fr. Esteban was an example of a priestly figure in all its dimensions: in the measure that time passes, his paternity, his giving of self, and the passion for the mission takes a renewed impulse for those who had the gift of being close to him.

Personally I had the good fortune of sharing twelve intense years at the service of the Campaign with him. I received so much that I cannot stop giving it with joy. From heaven he continues to enkindle the heart and missionary fire. In these times in which life, the family, and values seem to go toward the precipice, in the mystery of the communion of the saints, he intercedes so that we have the courage to give our all for Christ, for God’s Kingdom, from our heroic and confident experience of the Covenant of Love.

The Blessed Mother’s haste, the objective of the Campaign

If he left something engraved by fire in me, it was the taking of hundreds, thousands to consecrate themselves to Mary’s heart, to bless their Home Shrines, to develop a popular sustainability to this Schoenstatt mystery. The Blessed Mother’s haste, and the objective of the Campaign like João Pozzobn affirmed: “To save the family through the great Schoenstatt work.”

What is our innovation, our originality, our charism? The Covenant of Love. That is why he saw the need to work and to take this to the open field to the entire Church, without placing structural obstacles that only delay the work of grace and of bringing Christ to hearts through his Mother’s heart.

Today I want to request something of Fr. Esteban, so that he will intercede before God the Father: that many allies like him will emerge in the Campaign, missionaries, and those missioned, who like him will make the light and fire of Christ received in Baptism grow through the Covenant of Love, and in this way transform and enkindle the world with God’s love. 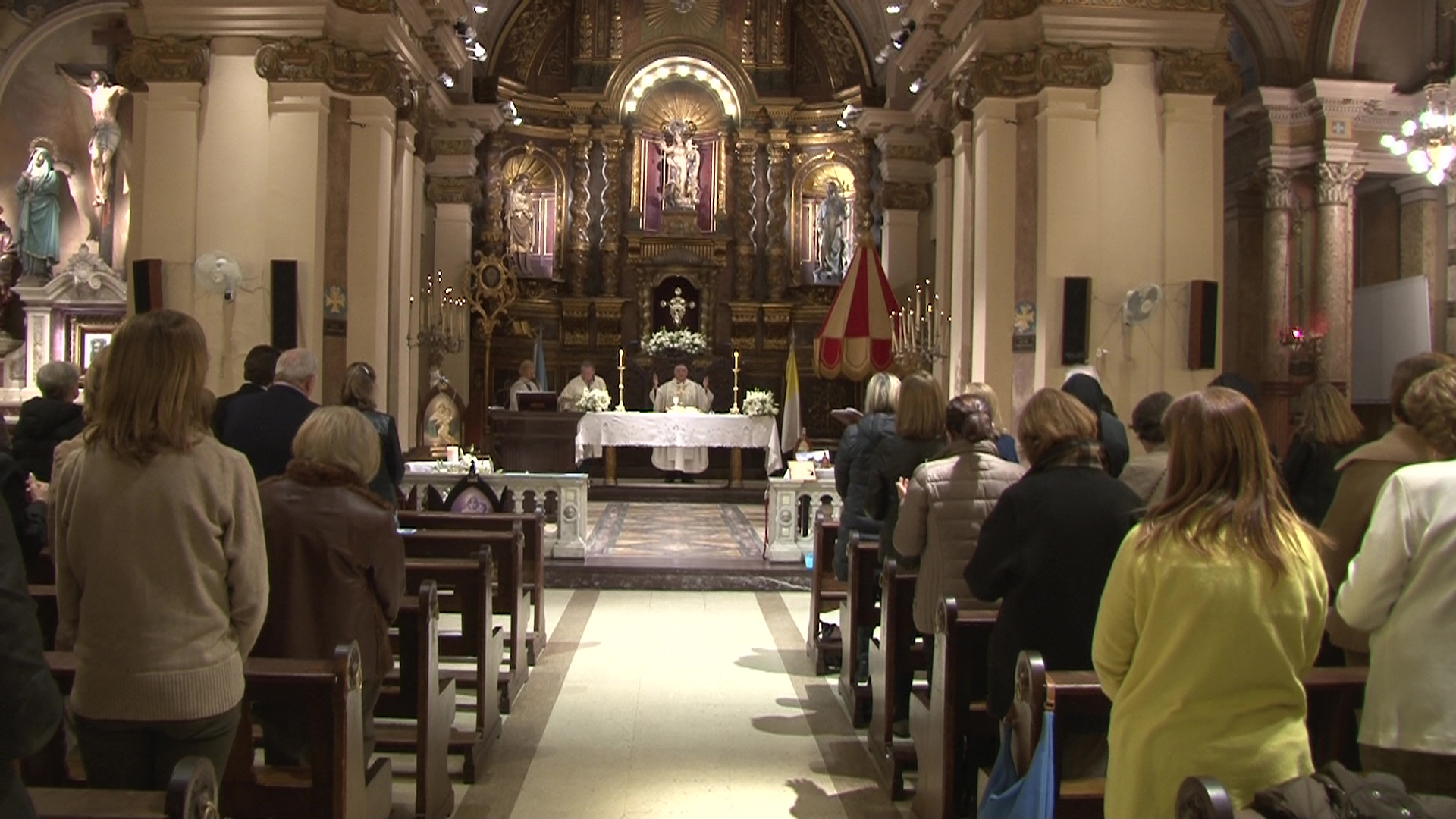