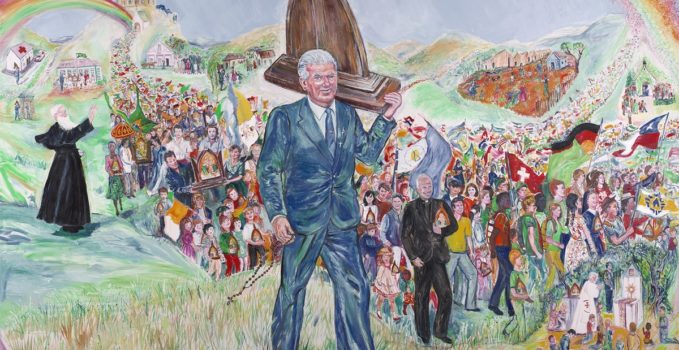 If it is of God, one man alone can move the world

Outside of Rome, in the Casolotti area, we find the Matri Ecclesiae Shrine, with the Schoenstatt mission of helping fulfill Fr. Kentenich’s dream of contributing to forging a Church that is near, and will be the culture and the world’s soul, reaching out to people. Therefore it was not by chance that one of the Schoenstatt International Center’s three meeting halls in Belmonte was dedicated to Joao Luiz Pozzobon. A large painting, in the universal language of art telling the story of his life and the Campaign, will hang in the hall. Thus no matter the language, every pilgrim visiting this Shrine will learn about the person, life, and mission of Joao Pozzobon. — 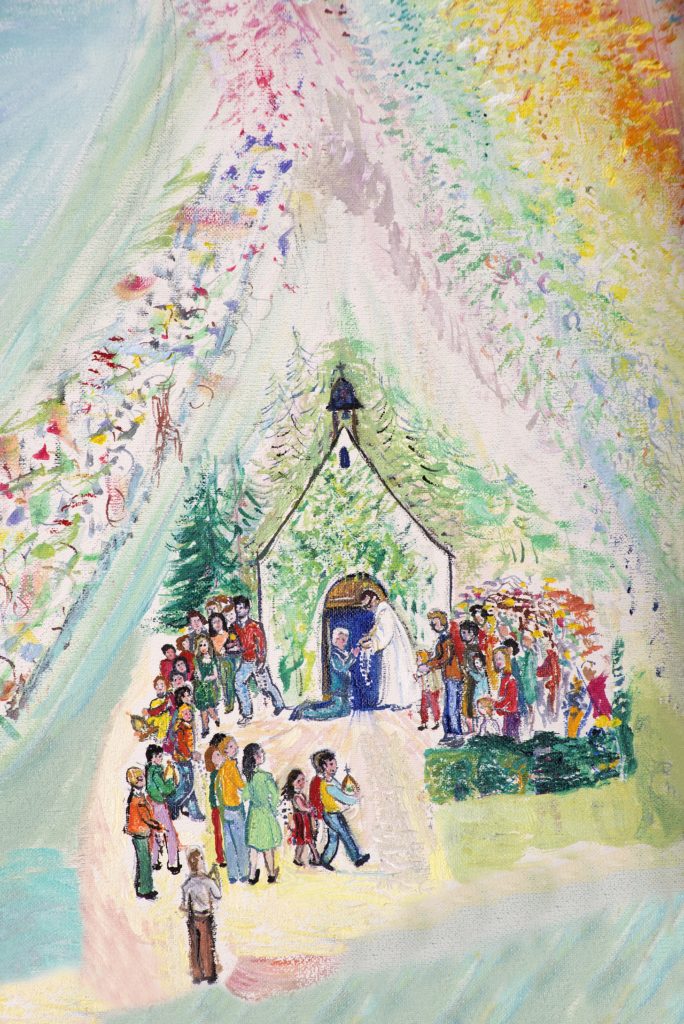 Joao Pozzobon’s Consecration to the Rosary

Based on historic photos, artist, Ana Adrogué de Cambaceres has taken photographs of the many witnesses and heroes’ faces of the Campaign that took on the missionary task in different countries and continents. And in the small scenes, she has also captured the story of the Campaign from its beginning and something of the spirit that inspired Joao and today’s missionaries.

In this painting, everything springs from the small Tabor Shrine. It was in the shadow of this Shrine that Joao received the mission on 10 September 1950, when a Sister of Mary, Sr. Teresinha Gobbo, entrusted the Pilgrim Mother of our Lady of Schoenstatt to him to carry out a Rosary Campaign to the families during that Holy Year. Joao’s house, which also functioned as a store, is close to the Shrine. He can be seen working unloading merchandise for his business to support his family. “Moving the world is unimportant if it was at the expense of my family…” Joao said. He is seen in the garden behind his house with a hoe… and with his wife and his seven children. There are also scenes representing that show Joao visiting families; leaving a hospital; with children in a school; and with inmates in prison. We see him in Vila Nobre, taking care of the neediest; in the Shrine of Londrina; consecrating himself to pray the Rosary, given to him by Fr. Gilbert Cavani; also, with Ubaldo Pimentel in a wayside shrine, during a gathering for Adoration that he organized.

These scenes are cut out over the landscape of the hills that frame Santa María and in the background, St. Peter’s cupola is drawn, peeping behind the Shrine surrounded by haze.  It reminds us that Joao loved the Church profoundly, and he always walked in Fr. Kentenich’s footsteps, ‘united to the Holy Church, the Pope and the bishops’ (JLP).

A torrent of new Joaos

From Tabor Shrine’s source of grace, a rainbow shoots up with enormous vigor, and generates a spiral that colors the entire picture, and it can be seen in its corners. It is a spiral of the Covenant, destined to wrap all the world in a Marian atmosphere and transform it, from the Shrine, through the Campaign. There is an immense torrent of ‘new Joaos’. Enkindled hearts, “ardent flames” (JLP), that take the ‘Great Missionary’ that they have received in the Shrine. They depart allied with Mary. And to nourish their Covenant, they go praying and trying to live what they contemplate in the Rosary. They go offering their efforts for holiness to the source of grace in the Shrine. There are youths, children, men and women, religious and priests, from Africa, Asia, Europe, America and Oceania. There is a multitude of missionaries from different nations, races and continents, following Joao’s footsteps, consecrating themselves in the Shrine as instruments as they go out in different directions. They are seen on different paths marching joyfully towards all the people of the world “as living images of Christ and Mary, as sources of blessing.” (FJK) 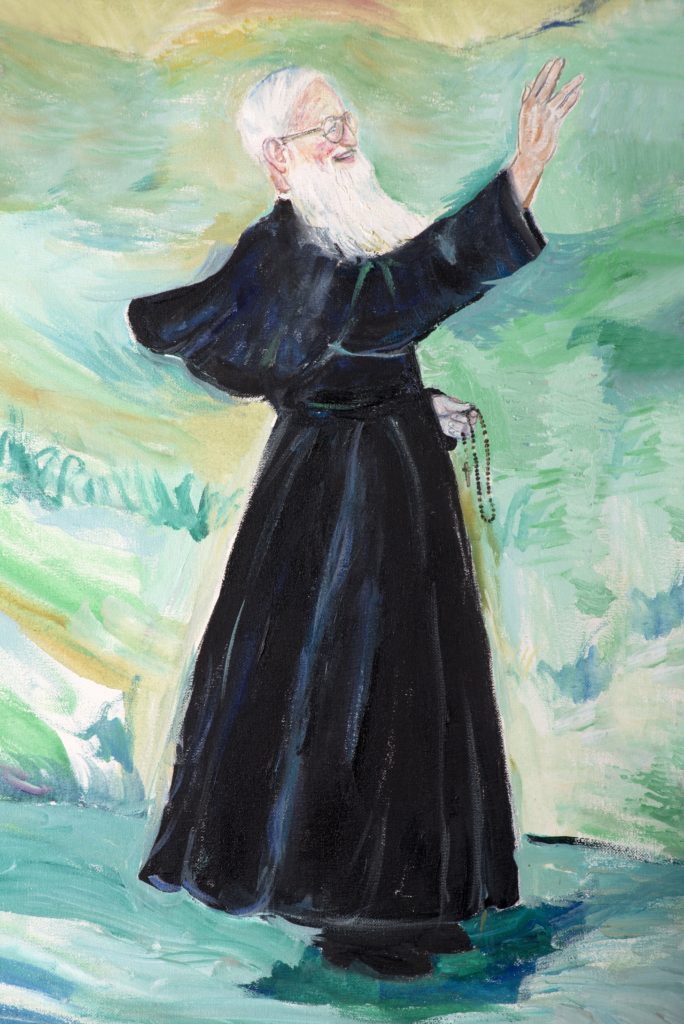 On a hill, the Father and Founder happily contemplates this explosion of life generated by the Campaign on its way. A great Visitation that Mary wants to undertake from the Shrine taking her graces and the message of the Covenant of Love; manifesting herself in families as the great Mother and Educator of the people, the bearer of Christ her Son; on her way she teaches – her allies – how to live the mysteries of the Gospel. With a paternal gesture, Father blesses this ‘modern ministry’, in which ‘all the fundamental power of Schoenstatt becomes efficient’ (FJK). It reminds us of Joao’s words: ‘wonderful blessing of the Father and Founder was the strength of this Campaign.’ Father is praying the Rosary, a Marian prayer that – as he conceives it – will lead to thinking, living, and loving like Christ and Mary, to be new men, a living reflection of being, and of Jesus and his Mother’s walking in the world of today. His attitude encourages the missionaries to follow his steps, like Joao did, and to make the lived Rosary a Covenant road and evangelization popular.

Determined to give all for the mission

Fr. Esteban Uriburu walks close to Joao Pozzobon, surrounded by young people and families attracted by his missionary fire. He carries the Pilgrim Mother in his arms, holding it over his heart. In the Tabor Shrine, he consecrated himself to the Campaign, and he offered his life for it. Through his example and words, he invites everyone to follow Joao’s footsteps.

In the center of the picture, Joao is marching briskly ‘with the Pilgrim Mother on his shoulder and a rosary in his hand’ (JLP) ‘always in prayer’ (JLP) ‘with his spirit always turned toward the Shrine’ (JLP) ‘united to the origin, the sodalists, to the Father and Founder’ (JLP), ‘For love of the Campaign, be a hero today’ (JLP). As he is walking, he seems to say: ‘If it is of God, one man alone can move the world.’ (JLP) 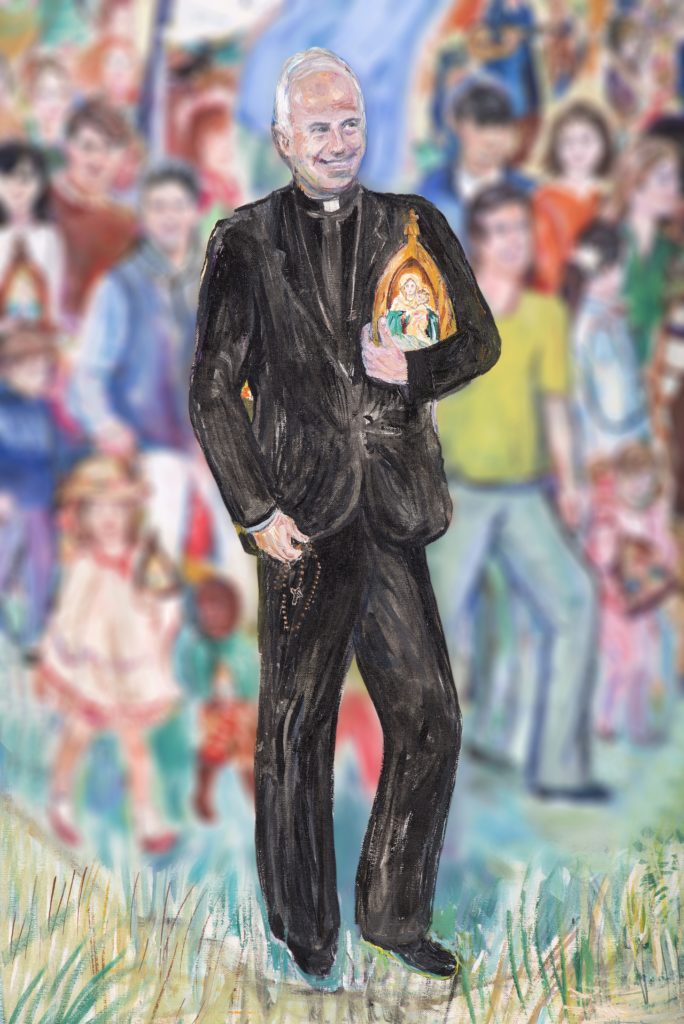