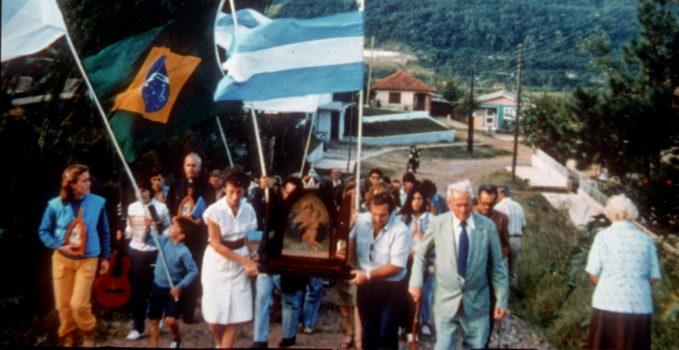 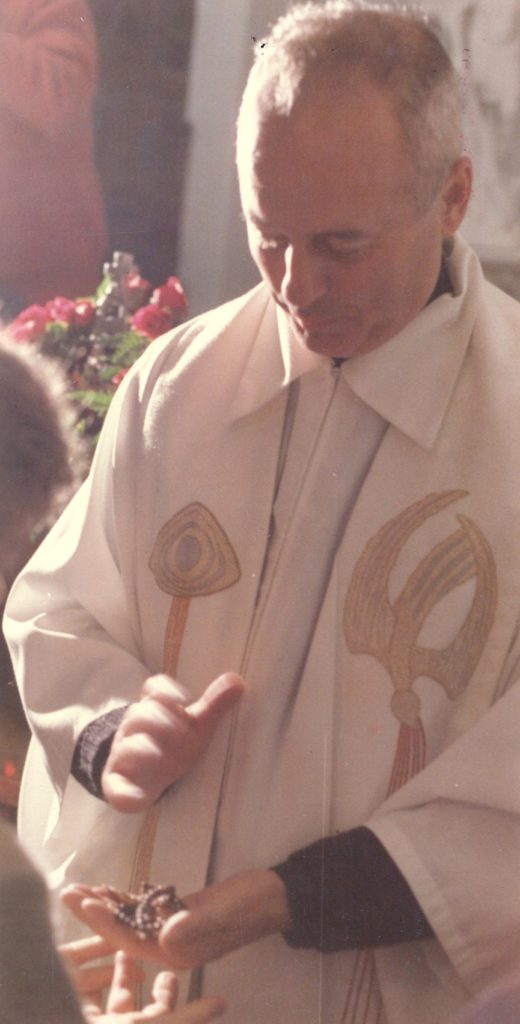 It happens in all families. When we are children many times we do not value what the presence, action and love of our parents means in our lives; it is something that is so natural to us. As time passes, we discover how many of our parents small and large actions marked and forged what we are today.

This year of the Father and Founder (Year of Father Kentenich), which we as a Family have proposed to celebrate, is a special time to pause and gratefully contemplate so many things that he sowed with his life, his letters and writings, also with his words that were and continue to be a treasure for each generation to value and rediscover for new life to emerge.

This happened in1983 when some of Fr. Kentenich’s life-giving words that he left sown in Brazil and in Argentina led us to the consecration of 7 November 1983, in Argentina’s Belgrano Shrine. Moreover they were the seed that began the expansion of Joao Pozzobon’s Rosary Campaign to the world:

There are two movements that should become increasingly vital: the Eucharistic movement through Adoration and the movement of the Rosary.” (Fr. Joseph Kentenich, Santa Maria, Brazil)

We want to pray, live, and offer the Rosary as a contribution to the capital of grace… If you do this, she will descend…and will renew all things…an earthquake of divine grace.” (Fr. Joseph Kentenich, Villa Ballester, Argentina, 1949)

Why not crown her as Queen of the Rosary?

It was at the beginning of 1983 that Father’s words awakened a restlessness among us. Fr. Esteban Uriburu who detected the young people’s interest in the Rosary, invited Guillermo, my husband, and I, to help him to encourage a Rosary movement that was prayed, lived, and offered for the capital of grace of the Shrine, just as Fr. Kentenich proposed. And he gave us a picture of Our Lady of Schoenstatt for us to pray to her in our Home Shrine asking her to guide us. This is what we did, and the Blessed Mother did not make us wait for her response. Soon the idea emerged – ‘If, we want to set up a Rosary movement, if, we want many youths to pray and live the Rosary in Covenant with Mary, why not ask the Blessed Mother herself to help just like Fr. Kentenich did in Dachau? Why not crown her Queen of the Rosary, like Father crowned her Queen of Bread, so that she will give many people the grace to pray and live it as her instruments to help her in her mission?

In our Home Shrine, we very simply crowned the picture that Fr. Esteban had given us. Soon the Blessed Mother responded to the crowning: through three gatherings, that year, more than 200 young people joined this current. Fr. Esteban told them: “We have proposed a goal: to take the Rosary to the battle- field of our heart and of our life, and then take it to others. Set up a large Rosary movement with the conviction that the Rosary leads to the transformation of life.”

We wanted to help the Blessed Mother to transform the world through the praying of the Rosary that was said, lived, and offered in covenant. Our hearts burned for this new mission. We wanted the Blessed Mother herself to ‘dub us knights,’ that she give us the Rosary as a weapon of prayer and holiness– as a sword to struggle for evangelization. We asked Fr. Esteban to give us the Rosary in the Blessed Mother’s name; he immediately accepted. We met in the Shrine. There were four of us who were going to consecrate ourselves.  But to our surprise another twenty-five who had heard about it arrived to join us.

To the ends of the world 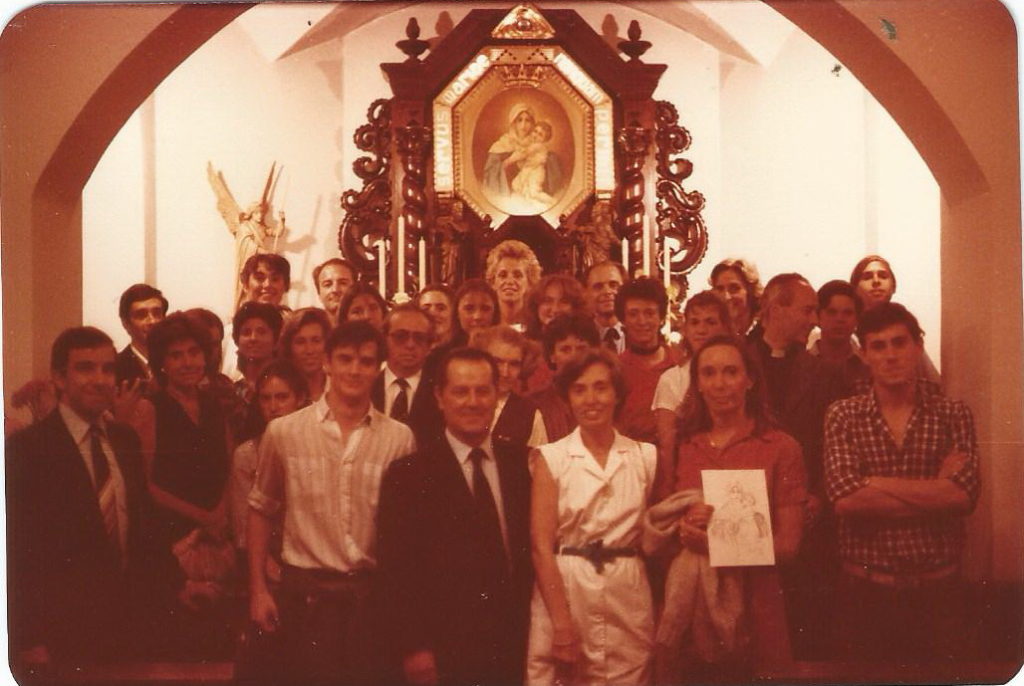 And that night of 7 November 1983, in the Belgrano Shrine in Buenos Aires, we once again crowned the picture that Fr. Esteban had given us as Queen of the Rosary, and we gave ourselves “as instruments to pray, live, and to take the Rosary to everyone” …We felt that this was something very big. We were willing to give everything and to consecrate ourselves to this mission. In our prayer, we told the Blessed Mother:

“You can send those who have consecrated themselves to you today to the ends of the world.” (Heavenwards)

Then one by one, we all approached. Fr. Esteban told us:

– “I give you this Rosary in the name of the Mother Thrice Admirable of Schoenstatt, as a weapon and shield of defense for the battle.”

“At that moment, we had no idea that we were entering into the channel of a divine initiative or that thousands of pictures like this one that we had just crowned would go on pilgrimage in a short time to five continents, teaching how to pray, and live the Rosary in covenant with Mary. We also did not know that the Blessed Mother was going to take our simple consecration into account and that she was going to use us as instruments to collaborate in this grandiose increase.

After Mass, we departed from the Shrine meditating on what we had experienced around that picture that Fr. Esteban had brought from Brazil. How many graces she has given! How many she had enkindled to follow that call of Fr. Kentenich to pray and to live the Rosary!

That Brazilian who prayed the Rosary

We recall that Fr. Esteban had told us that a man named João Pozzobon had given him the picture on his way through Brazil. The only thing he told us about him was that he was a Brazilian shopkeeper who prayed and spread the Rosary; until that moment, we had not given this any importance. But now the idea emerged: “(What) If we ask this Mr. Pozzobon for another twenty-five pictures to be crowned with the Rosary, so they take this current that was emerging over here, to all of America, as a gift for Fr. Kentenich during his centennial?

Fr. Esteban loved the idea. He took the letter to Brazil and brought Joao Pozzobon’s response: “I immediately felt that this is something divine, inspired by the Holy Spirit and the Our Lady of Schoenstatt. It is one of the major events of the Holy Rosary Campaign. It will be a great triumphant impulse for Fr. Joseph Kentenich’s centennial. The Mother’s hand can be seen, who is preparing from Buenos Aires…a strong current…to spread the Campaign to the entire world.” (Joao Luiz Pozzobon)

Shortly afterwards, we departed for Santa Maria with Fr. Esteban and a group of twenty-nine people to get the pictures. In Tabor Shrine, we met Joao Pozzobon, we listened in fascination to the story of his life that he told us, and we departed from the Shrine with the twenty-five Pilgrim Mothers, determined to give ourselves entirely to her mission. When we bid farewell during the Mass, Joao offered his life “so that this Campaign would become gradually grow, and take its message to everyone.” (Joao Pozzobon)

A year and a half later, the Campaign had reached twenty countries on five continents.

It is touching to recall this history one of the many covenant stories of love that Mary has been quietly weaving in her Shrines. And now, thirty-four years after 7 November 1983, we joyfully and gratefully celebrate the inheritance that our Father and Founder left us in those words of his that were fruitful seed, which in time gave fruit and originated the “explosive emergence” of Joao Pozzobon’s campaign to the world. 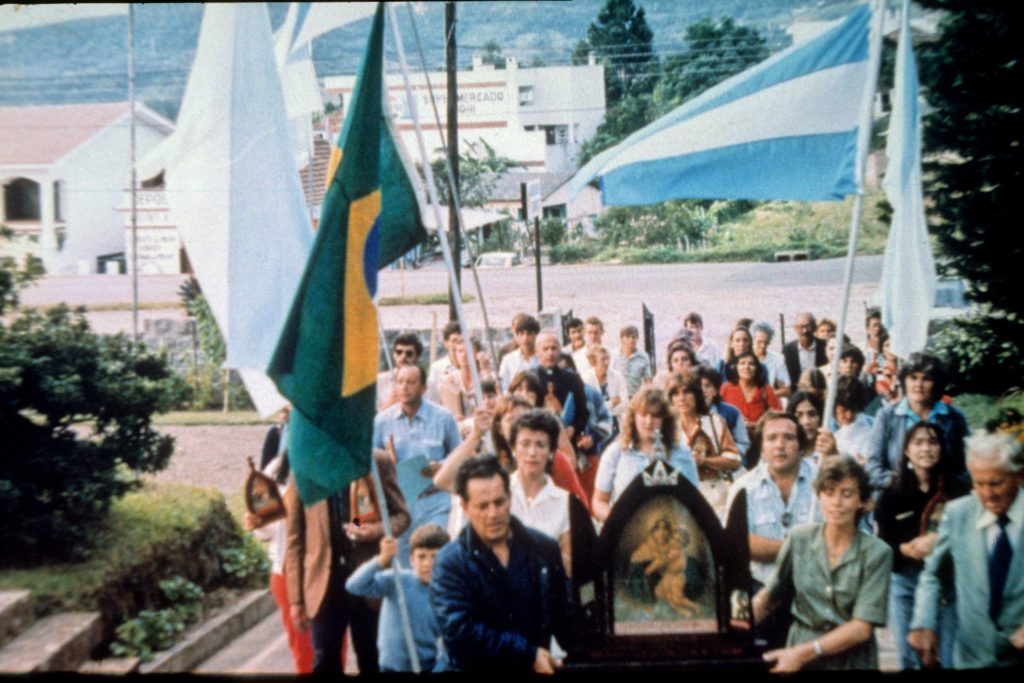