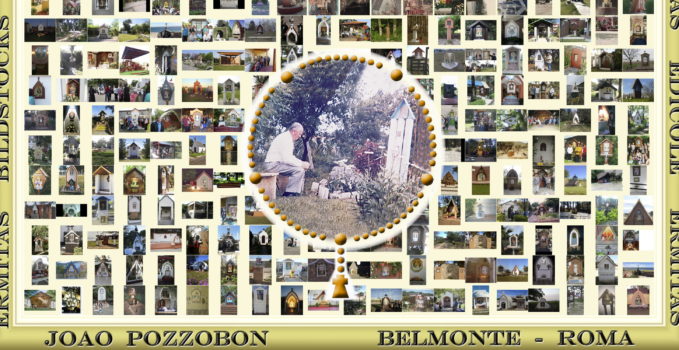 In early November, the first 250 wayside shrines photos arrived from the different places around the world and left for Belmonte in order to be present for the opening of the Retreat House on November 16, 2017; more continue to arrive. But these 250 are the ones that opened the way. They showed that the Blessed Mother is happy with this project of uniting all her wayside shrines in a picture of the large Original Pilgrim Mother that will preside in the João Luis Pozzobon room in Belmonte.

They are not just photos. They are 250 stories of life of Covenant and of love for the Mother Thrice Admirable of Schoenstatt and her mission, who made the Blessed Mother establish herself in new wayside shrines.

Thus these 250 wayside shrine photos invite us to press on. For Campaign missionaries and all who want to join to work tirelessly to give the Blessed Mother the joy of having all her wayside shrine included in this digital mosaic, which will form her picture as an expression of the living presence of our Mother in so many corners of five of the world’s continents.

The call to send photos was launched as a tribute to João Pozzobon, who sowed so many wayside shrines on his way through the Campaign

This is why near the picture sent to Belmonte, the first 250 pictures that have arrived surround the historic precious photo that transports us to Santa Maria, Brazil, to surprise João recollected in prayer, praying the Rosary in the simple wayside shrine that he built in his garden, behind his house.

This is a very special wayside shrine: the three pillars that hold the picture are of different colors: blue, pink, white and they evoke the three chapels that João built in Santa María while at the same time they served as his school.

At its base, fifteen bricks are attached to the ground – and they are placed in a circle – representing the fifteen mysteries of the Rosary, and the fifteen Rosaries that he prayed every day in their honor. Within this circle there are four sections that recall the liturgical seasons: Advent, Christmas, Lent, Easter. João also explained that the round shape of the construction symbolizes the world. This world that he dreamed of transforming into a Covenant with Mary, through the Campaign.