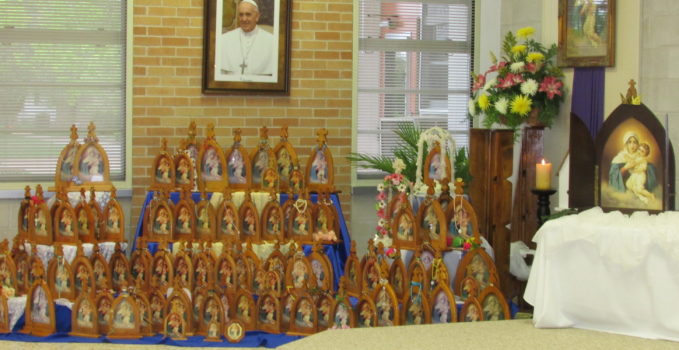 The Schoenstatt Rosary Campaign sponsors two special days each year at Confidentia Shrine in Rockport, Texas for Missionaries and those that receive the Pilgrim MTA in their homes.  These two days take place in November and March.  The most recent one took place on 12 March 2017.  On these days, new missionaries are commissioned, re-commissioning takes place for those renewing their commitment for another year, and it is also a day for those who have been prepared to seal their Covenant of Love.

Although the day was cool and rainy, it did not deter the participation of approximately 200 pilgrims.  The day began by serenading the Blessed Mother at the Shrine and receiving a heartfelt welcome as well.  Afterwards everyone gathered in the auditorium for a talk; Fr. Johnson Nelissery, a Schoenstatt Father, gave both the talk and presided at the Holy Mass.  Father’s talk was focused on the Texas motto, MISSIONARIES OF MARY, BUILDING COVENANT CULTURE.  Father also emphasized the meaning of commissioning and re-commissioning.

156 Pilgrim MTA’s graced a side altar.  122 were being re-commissioned to continue on their journey in the great visitation for another year, and for the first time, 34 were initiated for their journey. 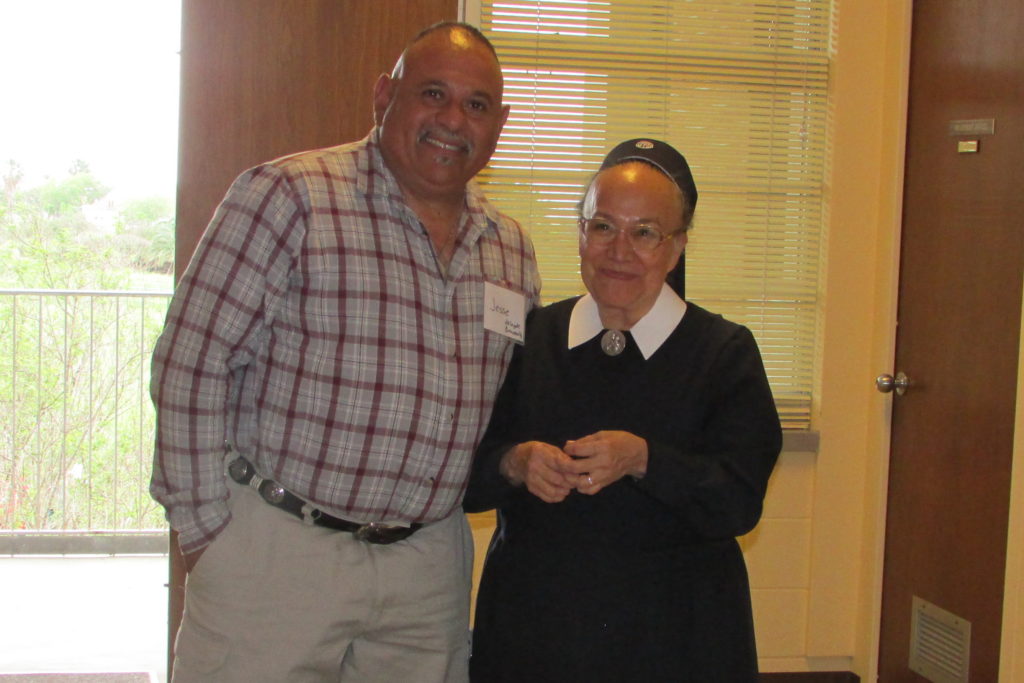 She really does take perfect care!

After lunch, everyone gathered again in the auditorium for the recitation of the Rosary.  After the Rosary, a missionary gave a moving testimony on how Our Mother Thrice Admirable, Queen and Victress of Schoenstatt had come to the aid of her family.  In summary, her testimony went something like this:  her husband was in the process of securing his legal and permanent residency in the United States.  As part of the lengthy process, he would have to travel to the Consulate in Ciudad Juárez, Mexico.  Before beginning the journey, their parish priest, who is devoted to our MTA, prayed with them and entrusted the whole matter to Our Blessed Mother.  They had to travel to Monterrey, Mexico and there board a plane for Ciudad Juárez.  Everything was proceeding normally, and they were praying fervently to Our Blessed Mother.  They followed all the steps in the process: go here, go there, sign here, now do this, come back in an hour, etc.  Time was running out, and they had to board their plane at 8:00 PM.  It was almost 6:00 PM, and the husband tells his wife that she should go on, so they would not lose both plane fares, but she would not do so.  She reminded him that they had entrusted the matter to Blessed Mother and she would take care, so she went to a corner and continued to pray fervently.  There was a long line ahead of her husband, there was only one clerk, and only fifty resident documents would be issued that day.  It looked hopeless, when suddenly another clerk appeared, he took the stack of applications and flipped them over, and he called the first name, which originally had been at the bottom of the pile, and it was her husband’s.  Blessed Mother had taken perfect care, she had answered their prayers, and the gentleman had received the longed for documentation that now made him a legal and permanent resident of the United States.  With grateful hearts, they were able to board their plane with plenty of time.  A round of applause and cheering confirmed what our Father and Founder always said, “She will work miracles!”  It is important to note that on March 12, 2017, this missionary who gave this testimony was re-commissioned for another year, received her second Pilgrim MTA that would visit another ten families, and she sealed her Covenant of Love.

Holy Mass then began with many grateful and joyful hearts.  Immediately after the homily, a beautiful floral crown was brought up in solemn procession.  As Blessed Mother received the crown, the following prayer was recited in both English and Spanish:

As Queen of the Schoenstatt Rosary Campaign, we thank you with childlike gratitude and confidence for the graces you bestowed on us your joyful instruments.

Inspired by the Holy Spirit and as Missionaries of Mary, we want to share the love of the Blessed Mother and extend the mission of the Rosary Campaign, growing in love, unity and sanctity in our daily life.

As we follow in the footsteps of Joao Pozzobon, not knowing the destination and the way in these challenging times, let us evangelize, serve and bring Christ into the culture.

In this spirit we crown you: “Queen of Covenant Culture.”

Immediately following Holy Mass, the twelve people sealing their Covenant of Love in the Confidentia Shrine led the procession to the Shrine.  Carlos and Elizabeth Cantú had prepared the twelve people from the Diocese of Brownsville for their Covenant of Love and assisted Father Johnson with the ritual.  With great joy and gratitude, they received their covenant medals and signed the Covenant Book. 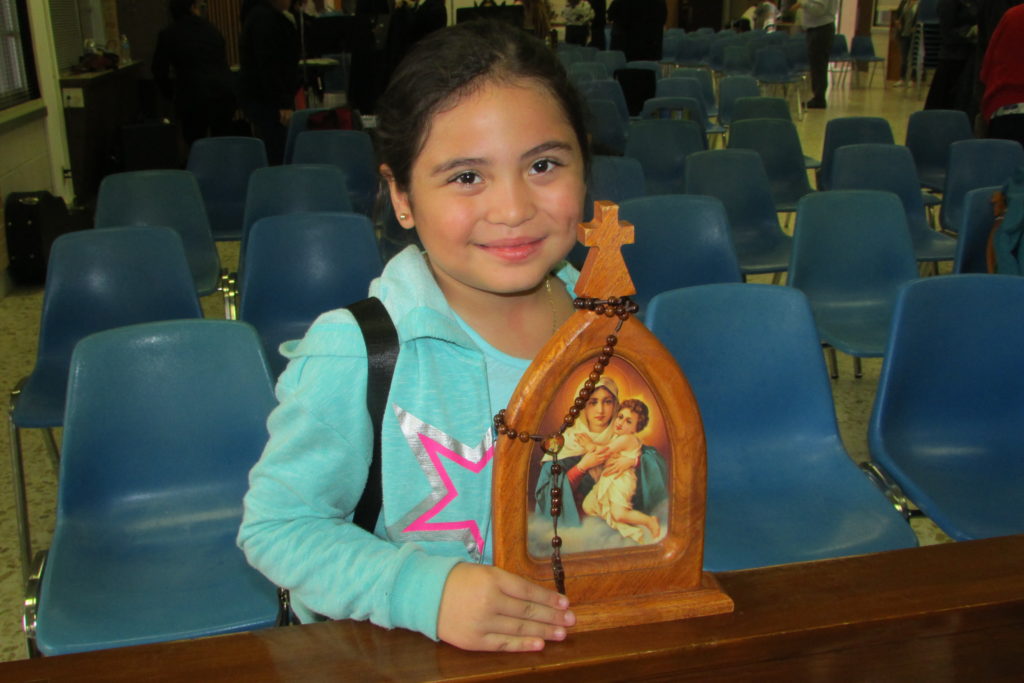