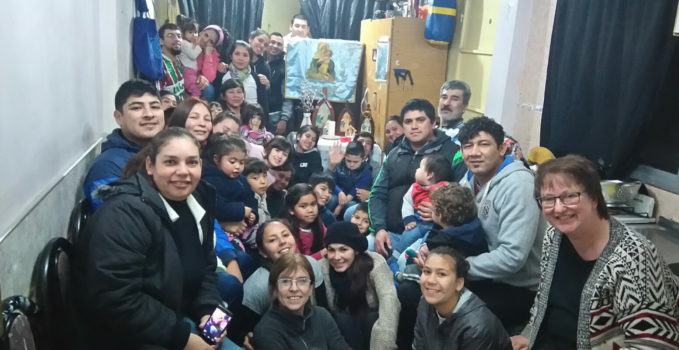 “Today I am 40 years old,” joyfully said a woman who seemed much younger. Her two little children were on her lap. And before everyone could sing “Happy Birthday,” she surprised everyone with her announcement: “We are going to get married…” From the stairs outdoors, where most of the men stayed, a faint, distant voice could be heard echoing her statement: “Yes, it is true, we are going to get married”. There was spontaneous and sincere applause. “You should know he was an alcoholic,” Cristina told me. She is a campaign missionary, who invited me to this impressive gathering, a highlight of my visit to Argentina.

“We have been together for more than twenty years,” she related, “we had many beautiful moments and many other horrible ones, but we have continued together. He drank; he drank too much. But I said to myself: “I am not going to give up before a bottle that cannot speak. I can speak and I spoke to him and I stayed with him. And he overcame it; he does not drink any more, for a long time!” Meanwhile, he entered, sat on the floor, and with a face shining with happiness, he looked at her and said: “I do not drink any more. We won.” And they are going to marry. I saw the Pilgrim Mother on the simple table. She is the center of this meeting on the second floor of a housing unit in Villa 31, and I prayed: “You won.”

“We also find it hard to make room for the consciences of the faithful, who very often respond as best they can to the Gospel amid their limitations, and are capable of carrying out their own discernment in complex situations. We have been called to form consciences, not to replace them…(AL 37). What love, what sacrifice, what improvement, what faithfulness invested in this couple’s relationship that now desires the sacrament of matrimony! What human greatness and what openness to grace!

“Following this divine pedagogy, the Church turns with love to those who participate in her life in an imperfect manner: she seeks the grace of conversion for them; she encourages them to do good, to take loving care of each other and to serve the community in which they live and work…When a couple in an irregular union attains a noteworthy stability through a public bond – and is characterized by deep affection, responsibility towards the children, and the ability to overcome trials – this can be seen as an opportunity, where possible, to lead them to celebrate the sacrament of Matrimony. (AL. 78).

I had read these paragraphs of Amoris Laetitia sometime ago. Now I understand them, here in Villa 31, where they remember Cardinal Bergoglio as one who listened to them, who visited them, and who baptized, confirmed and married many of those who were here around Schoenstatt’s Pilgrim Mother on this cold afternoon.

“We too.” While I thought about Amoris Laetitiae and admired this couple, who were still not married, but who perhaps had a more proven faithfulness than many “regular” couples, I almost missed the announcement, “We too.” The hosts, the owners of this house, who generously offered it for the Schoenstatt meetings, but who always left. Remained awhile back. “We too.” They also want to marry… “But not on our date,” the others insisted. “Well we also want to marry in July.”

“They beat me to it”, Cristina commented later. “I thought about speaking to them sometime about marriage, but they beat me to it. It is the Pilgrim Mother… She truly works miracles.” We are witnesses to the announcement of five couples who decided to ask for the sacrament of matrimony. 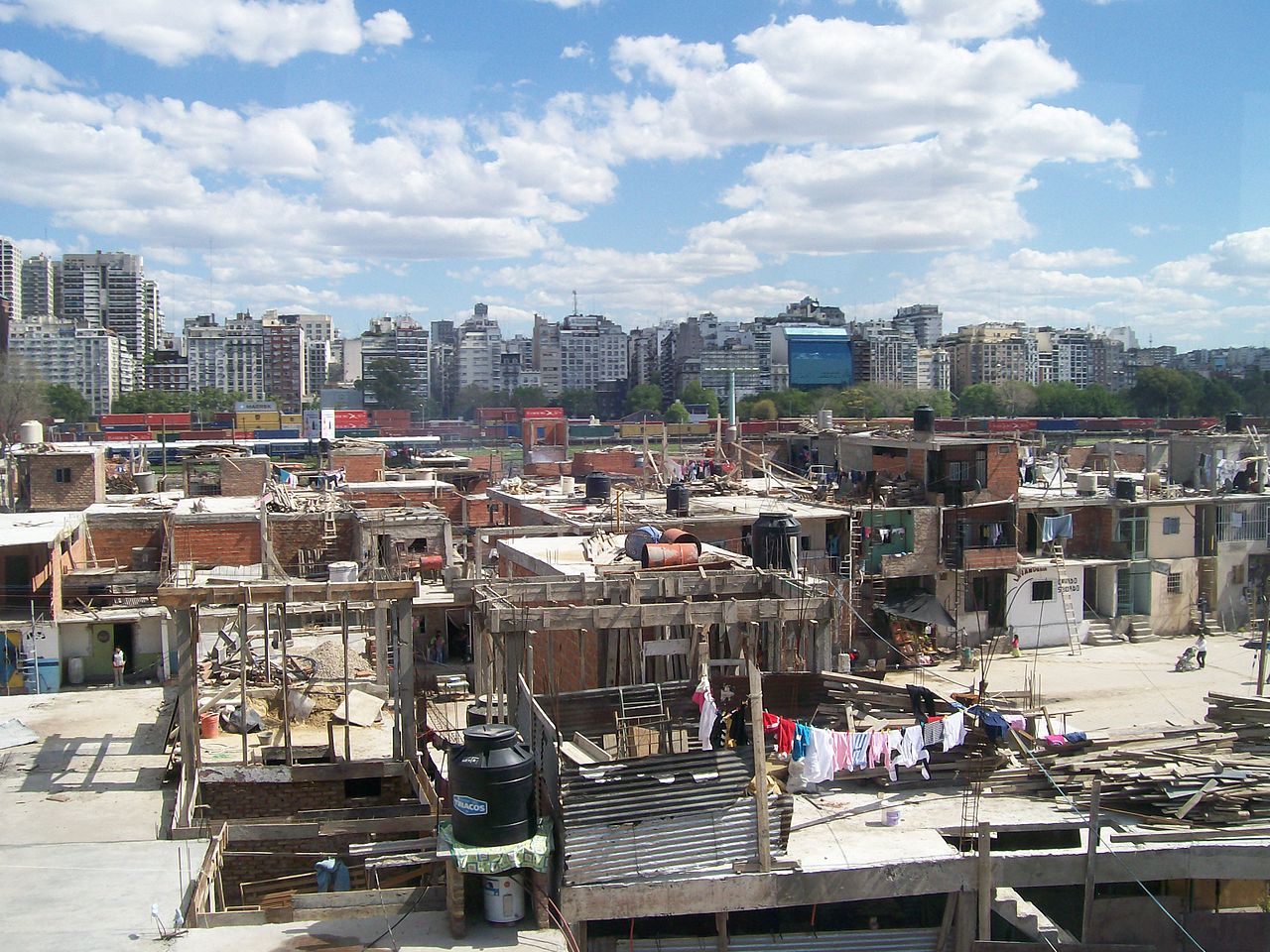 The Pilgrim Mother in Villa 31

Villa 31 is a villa located in Buenos Aires, in the Retiro neighborhood, close to the main bus station and close to the most important railroad stations. It has more than 40,000 residents; half are Argentineans, followed in number by Paraguayans, Bolivians, and Peruvians.

The Pilgrim Mother arrived in the Villa with a Paraguayan missionary who came to live and work in Buenos Aires. She conquered more and more hearts. Children, youths, men and women have sealed their Covenant of Love. Now they are conquering a wayside shrine of the Schoenstatt Blessed Mother. Villa 31 is hers….

That afternoon, Adela, the town councilor of Villa 31 and Schoenstatt coordinator, welcomed us at the entrance of the Villa. Cristina White visits it for sometime, they made a pilgrimage to the Confidentia Shrine with her, and on 18 October, they want to go on pilgrimage to the Father Shrine in Florencio Varela. We walked with her through the backstreets that Cardinal Jorge Mario Bergoglio passed through so many times. These streets smell of poverty, violence, desperation, and they have thousands of stories about the struggles of having a decent life, a happy life, a life of faith…We went up to the second floor, the most adventurous stairs of my life, where approximately forty people, adults and children, waited for us.

Cristina took the opportunity of her German friend’s presence to ask them to relate their stories with the Pilgrim Mother. With the first one, I already had the answer to the question I asked myself after the marriage announcements: “Pilgrim Mother, how do you do it?”

“This little girl was at the point of dying,” a young mother related. Meningitis… “We took her to the hospital and we prayed, everyone prayed…” With tears in her eyes, she related how the entire community prayed through the intercession of the Schoenstatt Pilgrim Mother. The little girl was there; with a contagious smile on her beautiful little face… That is how she “works;” she simply shows them that she loves them. And greatly. She simply works miracles of grace.

One story follows another, for more than an hour. Between mates [herbal tea], tears and laughter, there were stories about healing, conversion, obtaining a good education for the children, maintaining a relationship, escaping dangerous situations, Baptisms, Communions, Confirmations, Covenants of Love, and weddings. (At the end of the night there were five wedding announcements, along with my crazy desire of having Pope Francis present at this moment and all of the Synod Priests, along with all the agents of the family ministry throughout the world…) 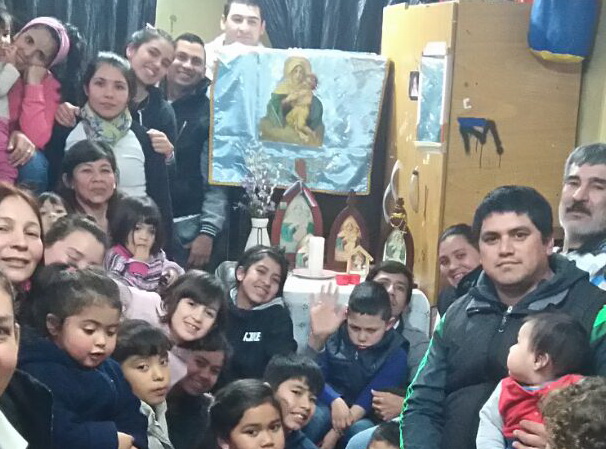 Mother, may every family feel the paradise of God’s kingdom in their home

It was time to pray the rosary. The children led it, and they transformed it into a heavenly moment. Children ages 6, 7, and 8 prayed the Our Fathers and Hail Marys devoutly, seriously and joyfully. An 11-year-old girl repeated a simple and strong prayer after each mystery: “Mother may every family feel the paradise of God’s kingdom in their home, may every home be united and sheltered under your protective mantle.” We touched on something of the mystery of the Pilgrim Mother’s work in Villa 31.

After the rosary, we prayed for Pope Francis. I am sure that he also prays frequently for his people in Villa 31…

We finished with a delicious meal. Who knows when or how it was prepared for so many people…?

It was almost midnight when we returned through these backstreets of Villa 31 with the smell of a Shrine in a car Adela had obtained. 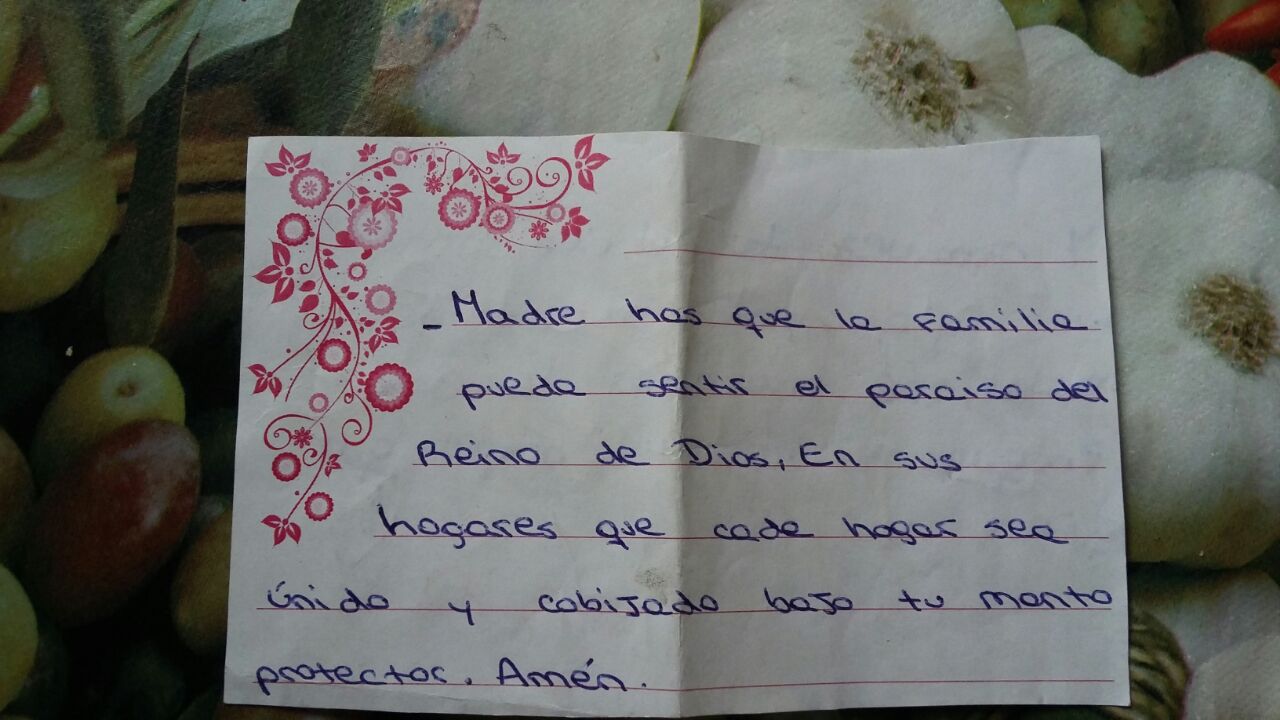