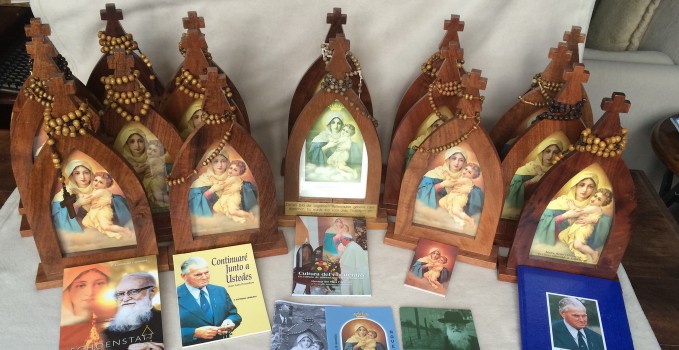 “Joseph, take the child and his mother”… and take them to Cuba

The Holy Father and 10 Pilgrim Mothers arrived at the same time.

“Do you need more Pilgrim Mothers?” the question emerged spontaneously at the conclusion of a conversation with Fr. Egon M. Zillekens about the founding of the Federation of Priests at Cuba, in the presence of the Pilgrim Mother…the one from the Original Shrine. The Chilean youths of Mission Cuba took five. Fr. Egon offered to give the three missionary priests some more Pilgrim Mothers, and Fr. José Gabriel’s response shows that the seeds that were sown truly fell on fertile missionary ground, “Some twenty-five to start…” This was in July.

Everything was prepared with care and joy in Buenos Aires, Argentina. But a question remained– how would the Pilgrim MTAs reach Cuba? It is too difficult to mail them because of the situation in the country. Through the nunciature? With someone who will travel, but… with whom, when? And precisely at the moment of thinking about and praying for a solution, an another article arrived at schoenstatt.org about the large St. Joseph statue that was to be sent from Buenos Aires to Cuba, to the Cathedral of Havana…Could it be that St. Joseph has once more heard the prayer of the angel: “Joseph, take the child and his Mother?”

Phone calls were made, emails were exchanged, until it was clear: Jorge Langlois – the Schoenstatter, who donated the St. Joseph statue – would take ten Pilgrim Mothers with the material included for each one, they will travel with St. Joseph! Fr. José Gabriel answered delightedly: “Your idea of sending the Pilgrim Mothers through the three Schoenstatt people is great!! When they arrive in Havana, it would be good if they left them at the Cuban Conference of Catholic Bishops in the name of Bishop Juan Garcia, specifying that they are for the Schoenstatt Movement in Camagüey.

Sent with training material for the missionaries

“There are also books, novenas, a sheet that explains the mission for the three priests who reside there and a letter for each one. The Pilgrim Mothers that are missing will be only be sent with the material that accompanies the Blessed Mother when she visits each person,” Mercedes wrote. The João Pozzobon novena written by Fr. Esteban Uriburu, the novena of the Mother Thrice Admirable, the Father Kentenich novena, “What is Schoenstatt?” a biography of João Pozzobon, holy cards of the Blessed Mother, and of course, the book of Pope Francis’ message to the Schoenstatt Movement accompanied the Pilgrim Mothers along with the notice for finding material and especially enriching experiences on schoenstatt.org.

But there is something more…

Blessed at the Shrine and attached to Father’s Pilgrim Mother

On several occasions, Mercedes MacDonough had the Pilgrim Mothers blessed at the Santuario del Centro (the Center Shrine) in Buenos Aires, the last ten, on September 10th, the anniversary of the founding of the Campaign.

It was Fr. Egon who heard the request of a missionary from Buenos Aires to “extend” the length of time of the pilgrimage through Argentina. Thanks to this generosity, Cuba’s Campaign will now participate in a special way with Father and Don João’s blessing.

“May God bless you and thank you,” – Fr. José Gabriel wrote – “I believe that many people in Camagüey will come to Christ through Mary.”