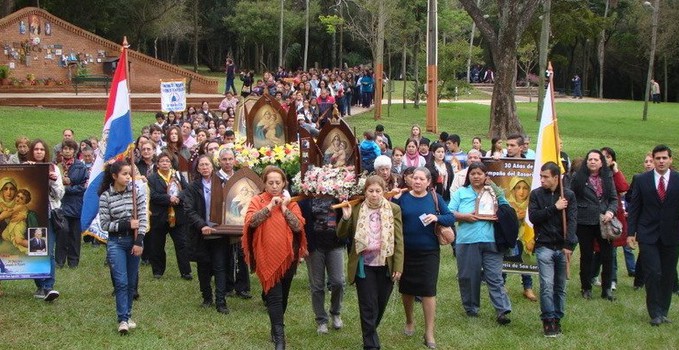 PARAGUAY, Communication team of the Shrine of Tupãrenda/mda •

On Sunday, 31 May, Father Antonio Cosp celebrated and Father Oscar Saldívar con-celebrated Holy Mass in Tupãrenda. It was the highlight of the month of May with many important events and especially on this 31st, which are mentioned below:

The delegation of the Schoenstatt Fathers was created in Paraguay 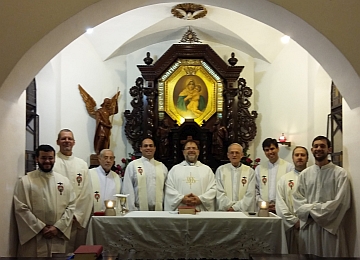 On this day, the new delegation of Paraguay was created as an autonomous territory with its own superiors in the Region of the Father (Argentina, Paraguay, Nigeria, and Italy) of the secular Institute of the Schoenstatt Fathers. The Delegation has two bishops, nine priests, and several vocations in training. Father Antonio Cosp relates: “This Sunday, 31 May, is a historic day for the Paraguayan Schoenstatt Family since we are 56 years old. Claudio Giménez and I were young students at that time; we were finishing our secondary training and we enrolled in the university. The present bishop, Bishop Giménez, was preparing for the difficult pre-med exams and I for law. Already in the first months as Schoenstatters, we both decided to enter the community of the Pallottine Fathers (as was customary at that time) to serve in building Schoenstatt in our nation. When the new community of Fathers was formed, we entered the seminary in Münster for some years of training, where we finished and were ultimately ordained as priests in Asunción. We arrived in Paraguay with Father Nicolás Schwizer as reinforcement to re-found the movement, which with the help of our lay brothers from the first hour developed rapidly and in depth. We thought about a delegation in Paraguay and another in Argentina. Wisely, the Delegation of the Father was developed with the support of the Argentineans, Germans, Swiss and Paraguayans, the present region with headquarters in Florencio Varela, Argentina. Since Paraguay is a country with its own culture and bi-lingual with Guaraní and Spanish, having seven Paraguayan priests, and having vocations, it was time to develop the Delegation. The Movement has developed very strongly and it requires our energy.”

Father Tommy Nin Mitchell is the delegate superior (and the new national director of the Movement), with two advisers: Father Pedro Miraballes and Father Antonio Cosp.

The Campaign is celebrating 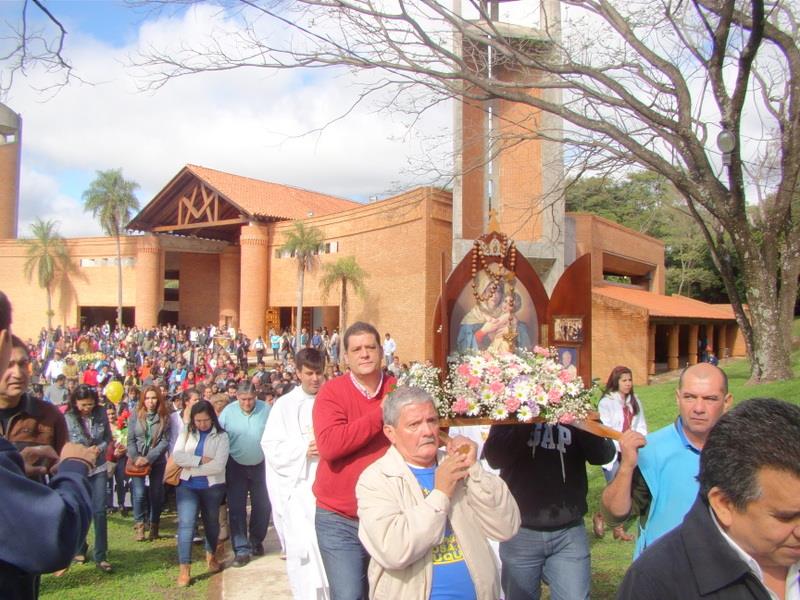 In the little Father Joseph Kentenich forest, there is a wayside shrine of the Blessed Mother close to a plaque with writings of João Pozzobon, founder of the Schoenstatt Rosary Campaign.

Mrs. Ana Echevarría and Mercedes Bonorino visited Paraguay for this anniversary; they were instruments in presenting the first Pilgrim MTA for Paraguay to Beto and Mirta Echegaray and to Ramón and Marité Marini, who along Father Nicolás Schwizer assumed the mission of making the MTA known throughout Paraguay.

The Little Missionaries the plaque states are the seeds of the Rosary Campaign in Paraguay. At the Pilgrims’ House they sang the Happy Birthday to the Pilgrim MTA, since it has been in Paraguay for thirty years! The Hombres Valientes [The Brave Men] enlivened the choir, in recognition of these ladies who were instruments for sending to our nation the first Pilgrim MTA, which was welcomed with an inspired awareness of mission consciousness by our brothers and sisters mentioned above.

Rosarito, the daughter of the beloved Julio and Mirta Arce de Patiño, national coordinators of the Schoenstatt Rosary Campaign, presented Ana and Mercedes with two clay rosaries (handcrafted in our country) as a souvenir of this moment. 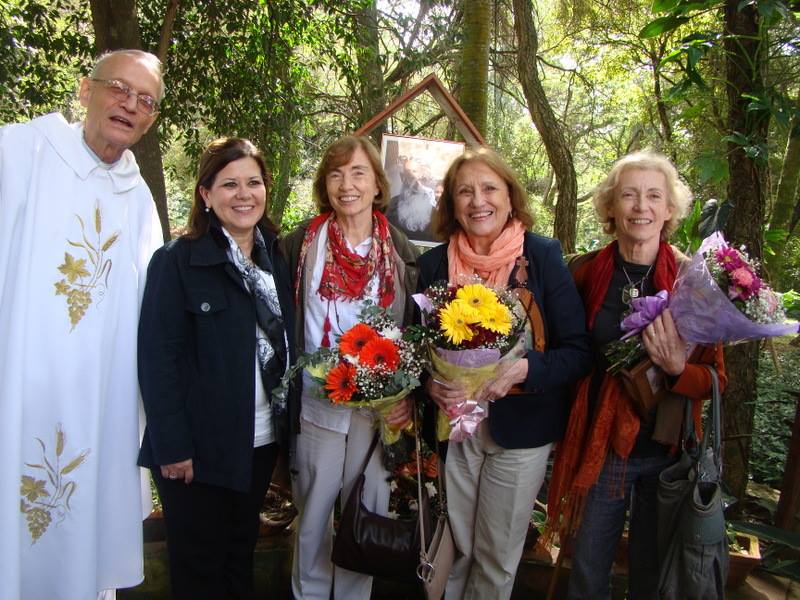 Part of the iconographic work on the tympanum of the door of the Santa María de la Trinidad Church [Holy Trinity Church] was uncovered representing God the Father of the Holy Spirit with open hands that welcome us as children on a very special day like the Feast of the Holy Trinity. Los Nazarenos musically accompanied the Eucharistic celebration. Los Nazarenos is the choir from Luque that has won the song contest for Pope Francis’ visit. Four of the nine members belong to Schoenstatt.

In the homily, Father Oscar reflected on the first reading:

“So acknowledge today and take to heart that the Lord is God in heaven above and on the earth beneath; there is no other. Keep his statutes and his commandments, which I am commanding you today for your own well-being and that of your descendants after you, so that you may long remain in the land that the Lord your God is giving you for all time.”(Dt. 4:39-40) Just as Jesus knew above all that he was loved by God the Father and he always sought intimacy with him, this is how we have to seek to deepen in this intimacy with God the Father, Abba, the beloved God the Father. Christ made us co-heirs of this childlikeness; we must fulfill the statutes and commandments of the Lord to please him as children. 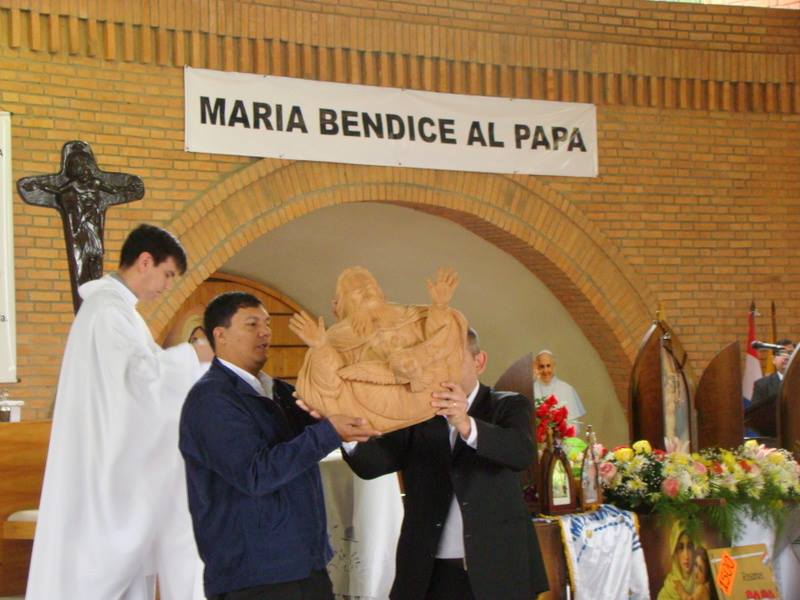 A crusade for human attachments

Father Antonio explained some of the meaning of this important milestone. At that time, Father Joseph Kentenich gave his all for the true organism of attachments desired by God and which was not completely understood at this stage of the world’s and the Church’s history. He had proven with deeds the importance of the paternal figure for all human beings in the training of his first disciples. The most treasured fruit and the proof of his intuition was their holiness. Father Kentenich considered that the spiritual childlikeness before him – as a loyal transparency of God’s paternity – could be respectfully expressed with the proper affection of a human being and not exclusively on the supernatural level as it was mistakenly thought (perhaps through Luther’s influence). For this reason, many times the third milestone is mentioned as a crusade for human attachments, to places and the ideals that lead us to God. In the third milestone the Father and Founder gave his all, so that love would be the producer of life, of the life of grace. It was a crusade of love offered to the Church. 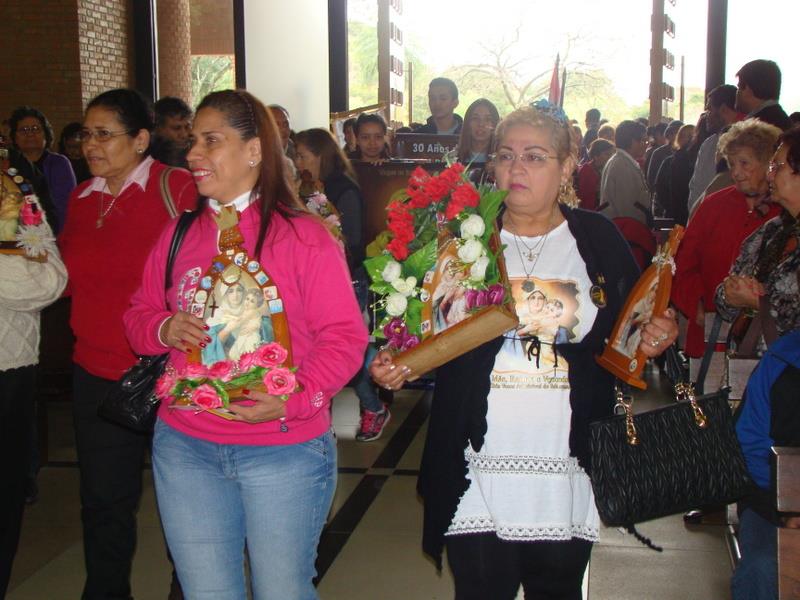