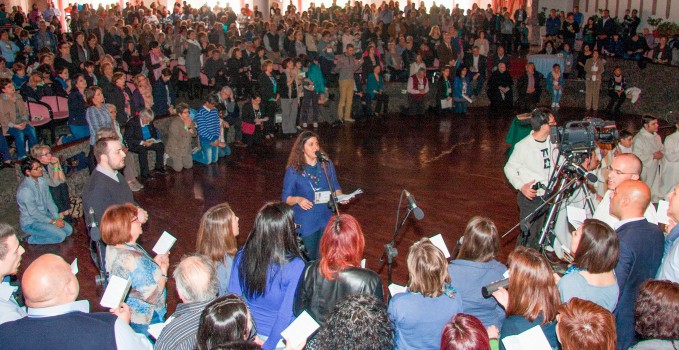 The 10th Regional Retreat of the Sicilian Schoenstatt Family

The family is not always and only that of our origin. Jesus said: “And everyone who has left houses or brothers or sisters or father or mother or children or fields, for my name’s sake, will receive a hundredfold…” (Matthew 19:29). Well, the Schoenstatt Family also exists; it was beloved and thought of by its Founder, Father Joseph Kentenich, who in 1914, in Germany along with a group of seminarians consecrated himself to Mary, in a chapel, which was later transformed into the Schoenstatt Shrine of the Mother Thrice Admirable. This consecration was called the “Covenant of Love,” and it became the nucleus of the entire Movement, which in time spread throughout the world, with close to 200 daughter shrines of the Original Shrine. In 1950, from one of these daughter shrines in southern Brazil, the Servant of God, Joao Pozzobon began to take the picture of the Schoenstatt Mother Thrice Admirable to families, jails, hospitals, and schools, and it became the mission of his life with the aim of helping Mary to take Jesus to all the “peripheries.” This mission arrived in Italy in 1997, and currently its leaders are Father Juan José Riba and Sister M. Ivonne Zenovello. There are more and more parishes and dioceses that are committed, with thousands of families who receive the picture of the “Mother Thrice Admirable” monthly.” You may ask: Why thrice? Because She is the daughter of God the Father, Mother of Jesus and spouse of the Holy Spirit. 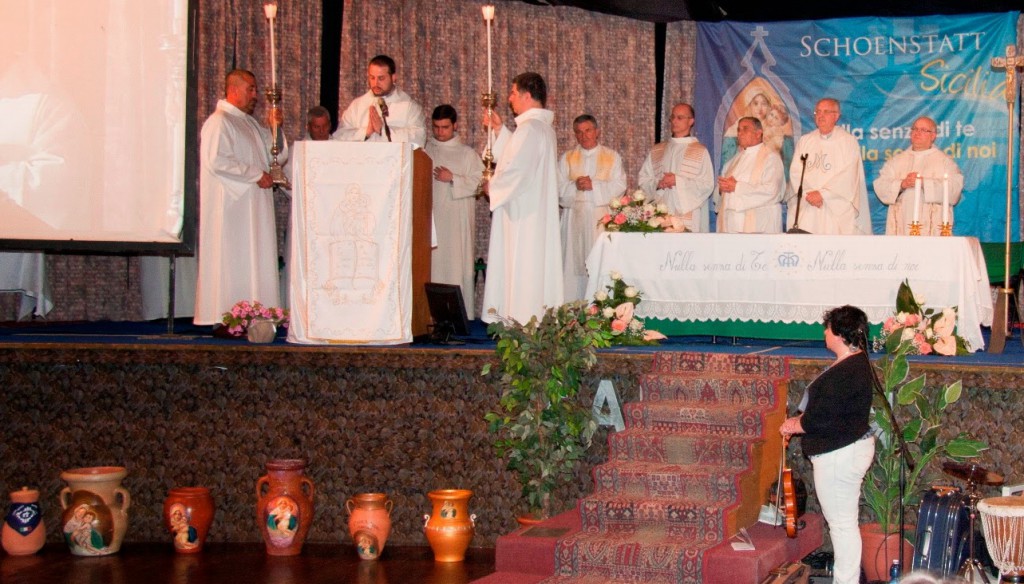 There were at least 1,500 people present who came from many dioceses

On April 19th, the Schoenstatt Family gathered at the Hotel Saracen in Sicily for its usual regional retreat (this year it was the 10th) so that the people who share the ideal can be together for a day. There were at least 1,500 people present who came from many dioceses with the aim of praying and sharing the mission that Pope Francis has entrusted for 2015 and the following years, during the Movement’s Jubilee of 100 years with these words:

Whoever dedicates him/herself to evangelization with the Pilgrim Mother does not do it for devotion or as an exclusively pastoral strategy, but because he/she has felt that they received a grace (“You received without payment; give without payment.” (Matthew 10:8), and they want to “reciprocate” by placing themselves at the service of the transformation of consciences and of families. As Friar Benigno, a Franciscan Friar, recalled in the conference: “The Virgin Mary has always been a mother-educator. Jesus learned to eat, speak, and to pray with her. And from heaven, the Virgin continues to be a mother educator. The Schoenstatt motto says: “Nothing without You, nothing without us.” What does this tell us? To become her ears, her eyes, her hands. We have the obligation in leading men/women to believe in the life that will come, to believe in Jesus. Therefore the invitation is clear, Friar Benigno said: “It is necessary to rekindle our own faith and to convert oneself, in order for everyone to become like Joao Pozzobon, who took Mary family by family. But, to carry this out, it is necessary to first understand what the Faith is.” Our Franciscan exorcist from the Diocese of Palermo, gives us advice: “Faith transforms life, because we become aware that we have a God-Father who loves us, and in the same way, that he loves his own Son. We do not understand this reality alone, but instead always through Jesus.

The “conquest of salvation” is thus, the light of Jesus dead and resurrected. And he continues, telling us what is not faith: “Faith is not simply knowing the truth of Faith, of knowing the sacred texts by heart. It is not only going to Mass on Sundays or getting married or baptizing our child in Church. Faith is not even entertainment, folklore, fanaticism or magic.” He concluded: “Faith is to trust in God, in his Word, despite what can happen in our life. To believe that God loves you although your child dies. Because if God does not intervene, it is not because he does not love us, but because he has a project of love for us. If not, how could He allow his Son to die? 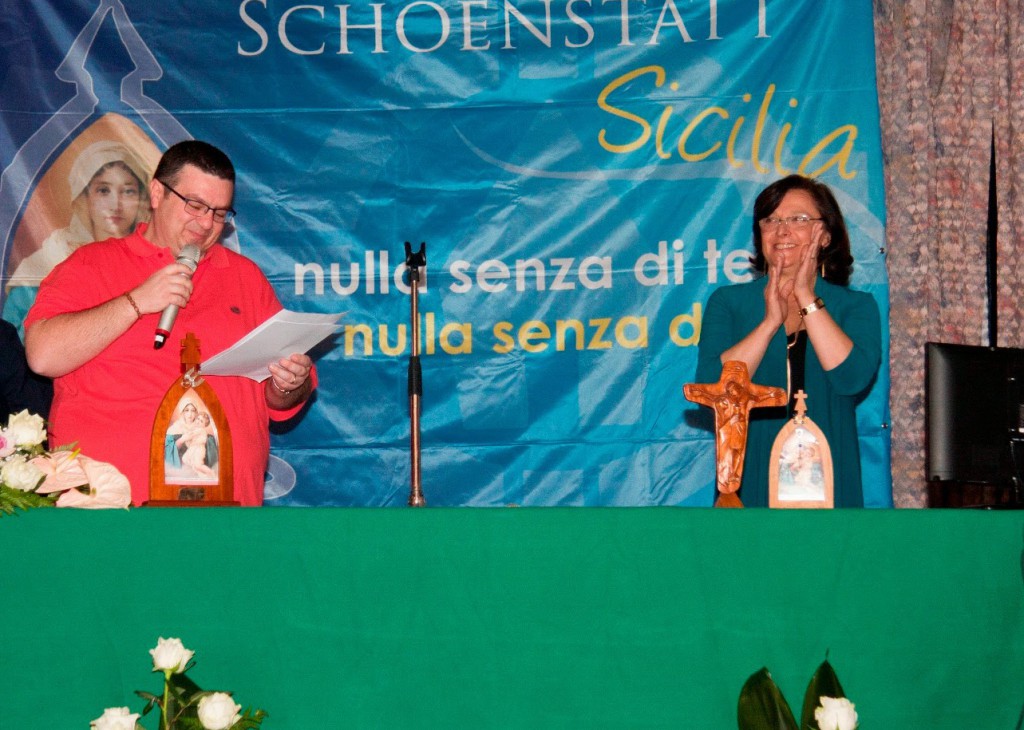 Upon hearing these words during the retreat, Antonela Vernengo said that she had the impression that Friar Benigno was speaking to her. We asked her if she could give us her written testimony (considering the context, a spiritual retreat) and the response was positive. So, here it is: “My name is Antonela, wife of Tony, mother of Gaia and of Jorgelina, my angel, through whom I have met the Schoenstatt MTA. My daughter, a splendid, very intelligent child became ill with leukemia at the age of 6 (September 2013). She began treatment, but in March 2014, it was no longer effective. The doctors decided to give her a new chemo, which if she had not responded to it, I would have lost her. It was April when the Schoenstatt Pilgrim Mother arrived at my parish: they offered to take the “Little Mother” to my home but I refused. (On April 25, I understood that Jorgelina’s illness had not responded to the new chemo. We avoided looking at her in order to not interrupt the flow of ideas. Mrs. Antonela, in perhaps an unsuspecting manner also to her, began to realize the ideal of the Schoenstatt Pilgrim Mother: (“You received without payment; give without payment.” ) In fact, we read: “Destroyed by the pain of losing my daughter, I held on to everything, I began to pray to God and to the Blessed Mother: I hoped for a miracle. For a second time, I was asked if I wanted to receive the Pilgrim Mother in my home and I accepted. She is now with me, among my household items, I see her, I pass by her side, but I still cannot go to her. Filled with suffering from seeing my daughter also suffer, I think that if Jesus and the Blessed Mother exist, they should by all means help her.” She pauses, tears flow and she concludes: “My daughter flew to heaven in September 2014, at the age of 7. From the atheist I had become, I have seen Jesus on the cross in Jorgelina. She is the one who brought me close to God and Mary. For the third time, the Pilgrim Mother came to my house a month after my daughter’s departure to heaven. Now after seven months since her death, I belong to the “Family of the Pilgrim Mother.” When she comes to my house, I place her close to my daughter’s photo, and from the depth of my heart, I entrust her to her, the mother of all of us.” Antonela is trying with all her strength to go forward, despite of being in the greatest mourning that can exist, that of losing a child. And like the Virgin Mary, like the Schoenstatt Little Mother, she is becoming a mother-educator of other mothers. And she began to pray to have faith, changing her mentality. If only you could see how beautiful she was while she clapped to the rhythms of the songs in church.

Since Sicily is a land that is strongly attached to Mary, the Campaign is spreading significantly. There are already 650 Pilgrim MTAs in fifty-seven parishes, and more than 7,000 families receive the picture of the Mother Thrice Admirable of Schoenstatt.