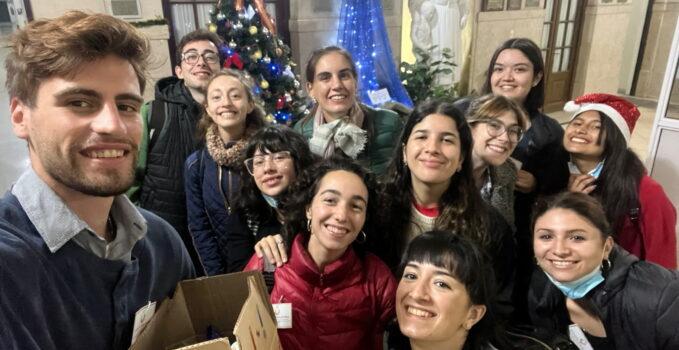 Once again, and it has been 21 years since 2001, we once again celebrated Christmas in solidarity and at 1:30 a.m. we gathered in the shrine of La Plata with a group of 130 young people from the Archdiocese and the Movement. Inspired by the motto “Be light on the way”, we went out to share Christmas with those who cannot celebrate it with anyone because they are homeless or work at night. —

Divided into groups of 6 to 8 people, we went around the city to share the joy of Christmas, bringing something tasty to eat: a bag with sweet bread, pudding, nougat… along with a small Christmas gift, a stamp, and a calendar.

After a month of organization, we were able to receive abundant donations and with a team of young people we prepared everything we needed for Christmas. Even on the night of the 24th, some stayed for dinner at the Family House in La Plata, in order to have everything ready for the moment when most of the missionaries would arrive at dawn. It was a sign of the commitment of the Youth with the Christmas of Solidarity.

The night was spent in visits to hospitals, police stations, businesses, guards, squares, streets, even the “red zone” of the sex workers… Christ became “light” for all. 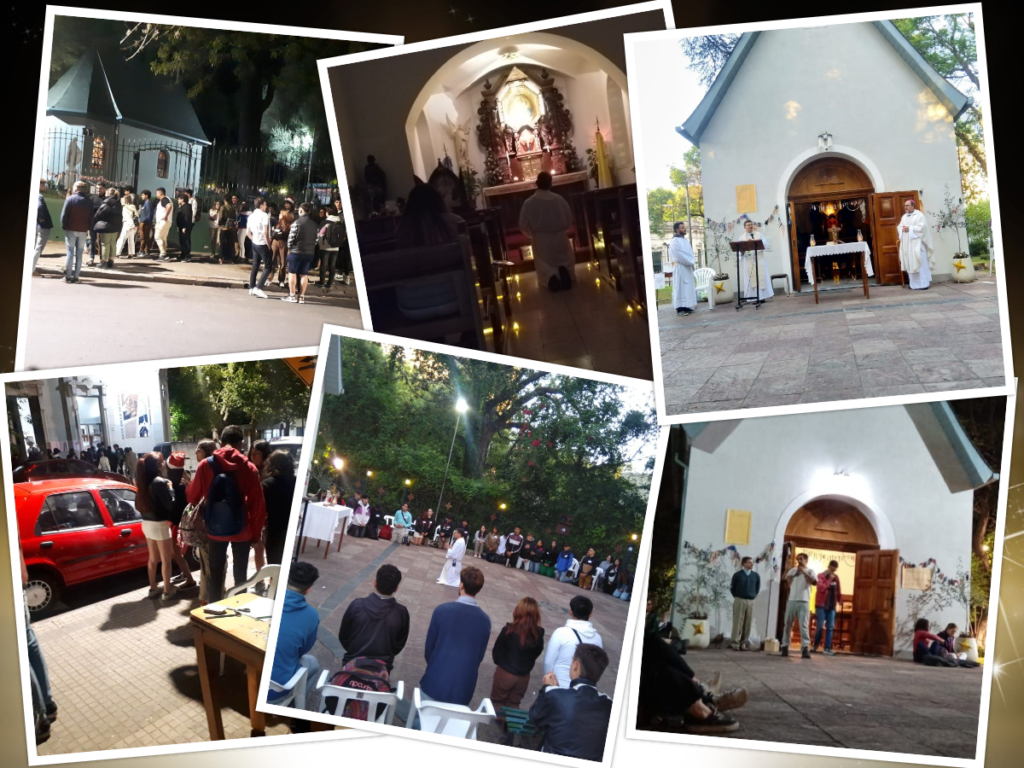 A young woman in the street

Personally, I share a particular experience. When we went to a square, we met a 21-year-old girl, named Marilyn, who was sleeping on the street. She told us through the guard of the square that a few minutes before she had been robbed of her few belongings, including her cell phone. We went out to meet her and after talking to her for a while we also noticed how cold she was getting and that she was not going to be able to sleep…so we invited her to come to the Family House, to have something hot to drink, eat and get warm. She agreed to join us in the car. There she told us what had happened to her and that a few months ago she had lost her 9-month-old baby due to a lung disease, so she was in a lot of pain.

She stayed with us until the next morning, ate what we could give her and participated with all the missionaries in the Dawn Mass at 6:00 a.m. in the shrine. Since we had a cell phone that we were not using in the house, we gave it to him. We also gave her a sleeping bag and some warm clothes. She was deeply grateful. She left with that and a special Christmas blessing at the Dawn Mass. I do not know what became of her life, but I do know that she experienced a Christmas where she experienced something of the goodness of God, who came to meet her through us to give her light.

Christmas concluded with a moment of Eucharistic adoration and the dawn Mass in the shrine, presided by Bishop Jorge Gonzalez, Auxiliary Bishop of La Plata, member of the Schoenstatt Federation of Priests. 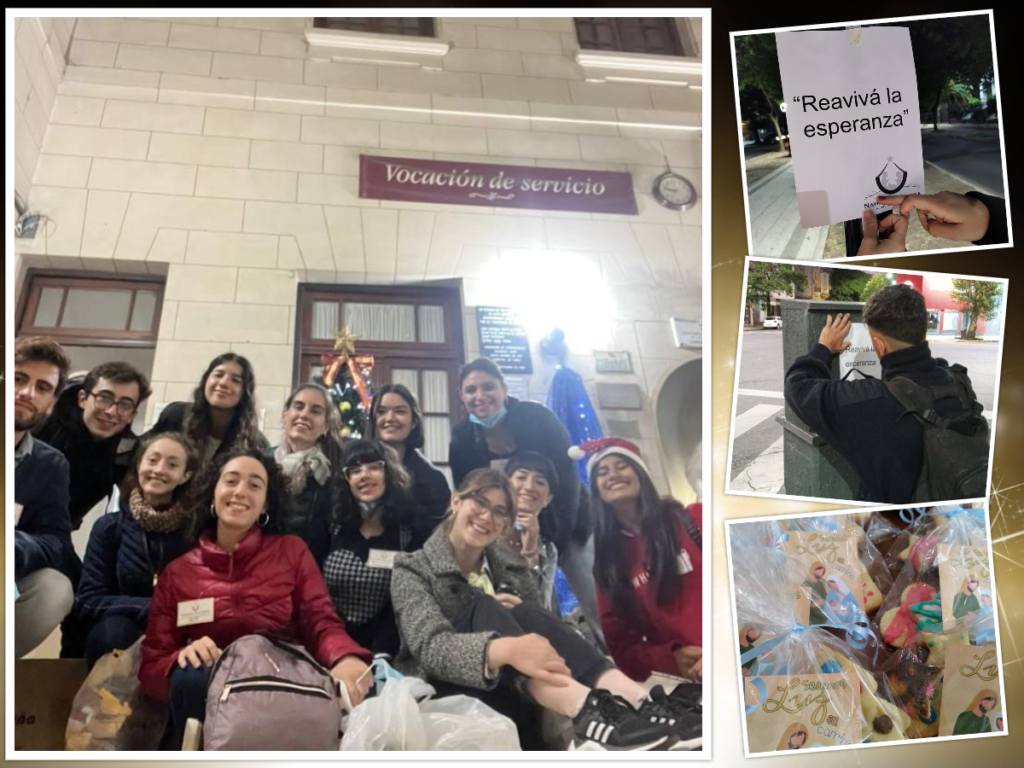 “For several years, several members of Navidad Solidaria have been spending Christmas Eve together at the Schoenstatt Family House. On the one hand, we want to be there early to welcome the participants at 1:30 a.m., and on the other hand, we want to spend Christmas Eve together, sharing it with some homeless people. I think it is essential to share the table among the team and with those who have less. I have always believed that the needy should not be seen as a simple recipient of charity, but as a brother who needs to remain in a community, who needs to be a community with others.

On that Christmas Eve there was no shortage of joy and good food, and above all, no shortage of little gifts packed for each one of us. This reminds me of every Christmas Eve sharing the table with those who have less: Christmas is to see the needy as a true brother”, says Seba Iaconis, young organizer of the Christmas of Solidarity.

Micaela, young missionary, and organizer of the Christmas, adds: “I wanted to thank everyone for the beautiful work we did, the time dedicated and all that we gave so that everything turned out great. I loved working with you and being that light in other people’s lives. Next year with everything. 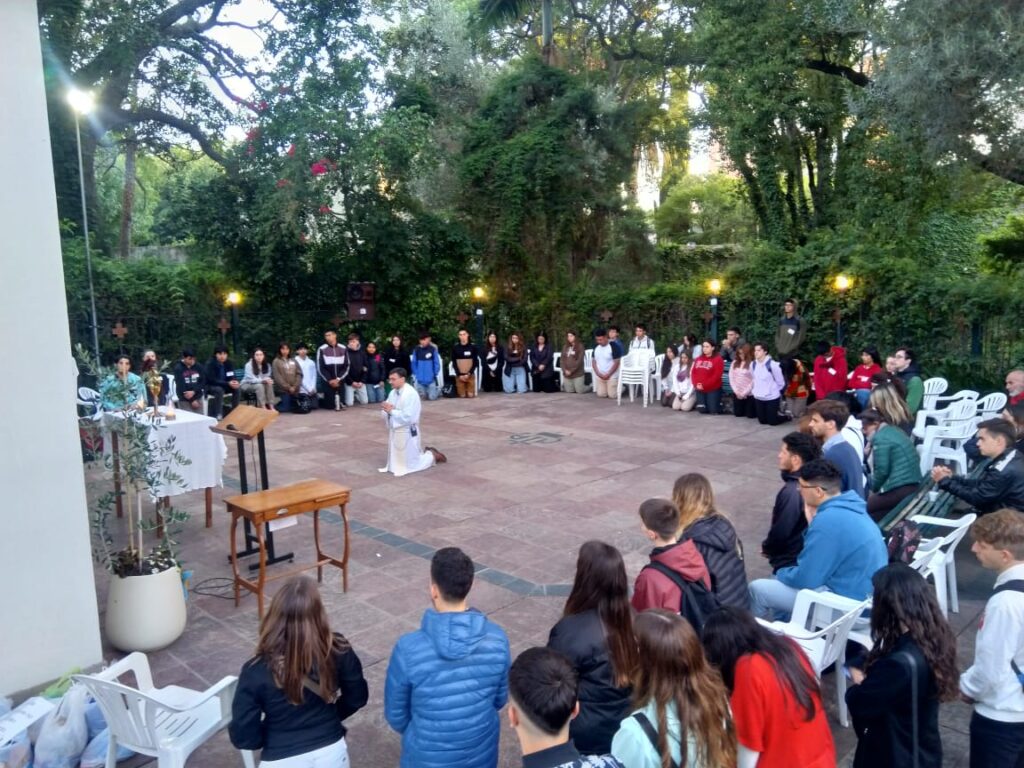 Thank you all for keeping the flame burning!

Today a flame, yesterday a spark that was lit more than two decades ago by a small group of young people dreaming of a different country, showing that youth still believed in the values that made our beautiful country great. More than 20 years have passed and those young people of yesterday feel immensely happy to see you, those young people were the same as you, they had the same dreams and illusions, they believed that by loving everything was possible… and that spark was transformed into a small light, a light that every 24 years is lit in the shrine and travels the streets carrying a message. The message, “today a savior has been born for us”….

Esteban Cabrera, former Boys’ Youth, and participant since the beginning of Christmas in Solidarity 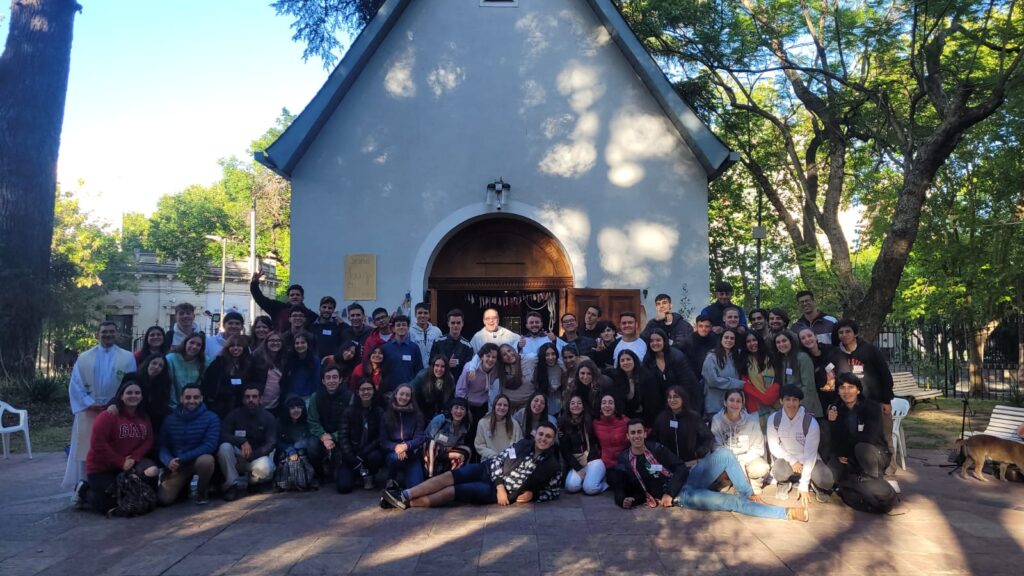