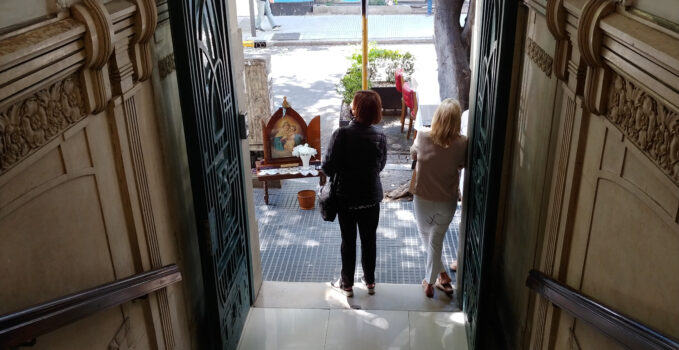 Some stop for a moment, look at her and continue on their way. Others touch her with devotion. Some make the sign of the cross. The vast majority pass by without looking or noticing her. “But she looks at them,” says Palmira Marino, who along with other ladies stands at the door, ready to exchange a couple of words with the people who stop, inviting them to leave their intentions in the basket. It is November 18, and like every covenant day, Mary leaves her shrine and stands on Riobamba Street, one block from Santa Fe Avenue, in the heart of downtown Buenos Aires. —

We are in front of a shrine in the city, a somewhat hidden shrine because it is located inside a house – and although there is a sign and a picture of the Mother Thrice Admirable next to the door, many do not know that they are passing by a shrine and even less try to enter. That is why the Blessed Mother’s reaching out project was born almost three years ago. 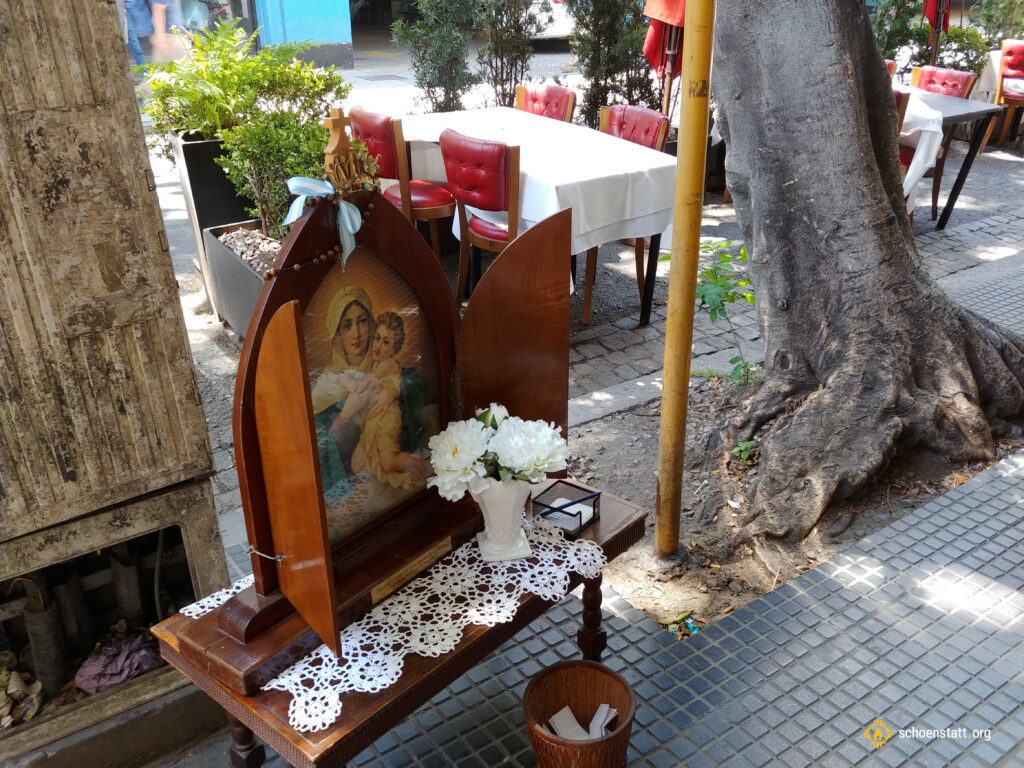 I was arriving at 11:15 a.m., after an on-foot pilgrimage to the Confidentia Shrine (a somewhat longer pilgrimage than planned, in truth). Here she is, the Auxiliary image of the Campaign, on the sidewalk, among restaurants, bars, stores, offices, during the hectic and noisy movement of the big city. Embellished with flowers, a basket to leave intentions, and accompanied by people committed to “just be” where she is and where people pass by.

Schoenstatters also pass by, among them Father Tommy Nin Mitchell, Regional Superior of the Schoenstatt Fathers, along with a group of people from Mendoza.

Inside, in the shrine, there are those who pray the rosary, also for the people who pass by on the street and receive – perhaps without knowing it – the graces that the Blessed Mother wants to give. 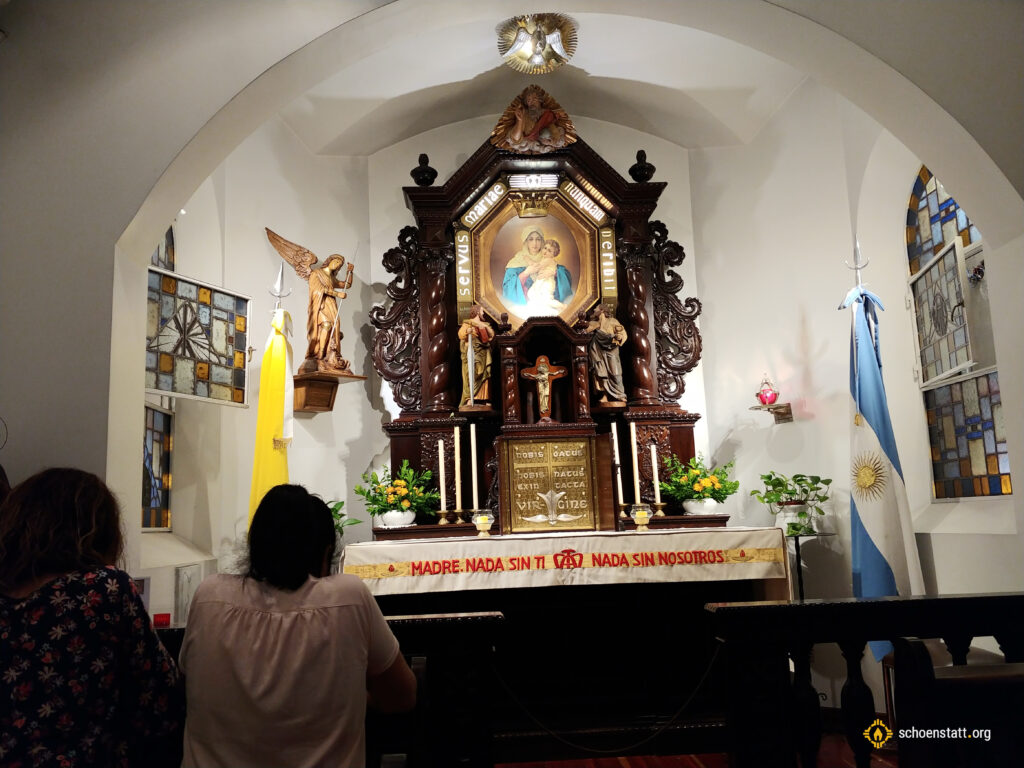 So many real-life stories pass by on the street

A delivery driver with his backpack passes without stopping, and after a few steps, he looks back. A greeting, an exchange in seconds.

Businessmen in expensive suits, office workers, a schoolgirl in a school uniform, some women with strollers, a homeless man, an old woman, the employees of the neighboring restaurant… they all pass by. 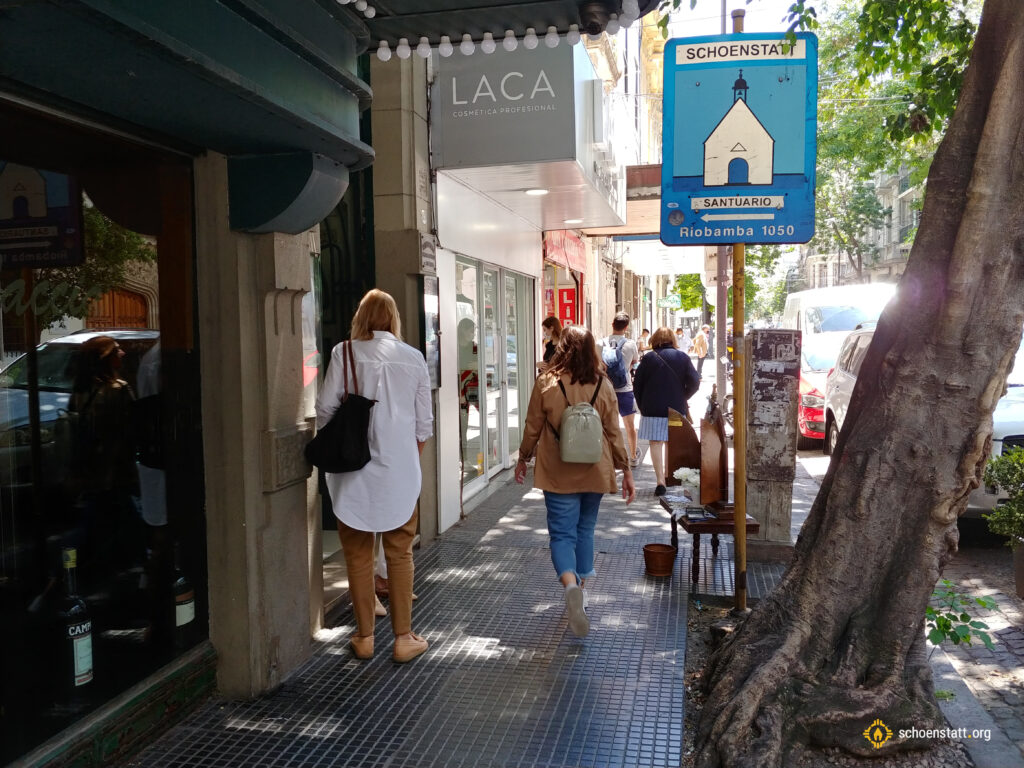 Before leaving, I leave the names of three sick friends in the basket. And as I walk home through the streets of Buenos Aires, I pray for each of those I meet along the way. Because I too must and want to be Mary reaching out.