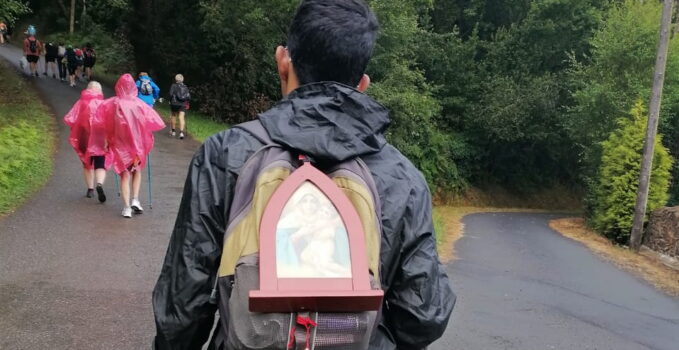 Luis is a Venezuelan citizen who had to flee, but he found a Pilgrim Mother image at the refugee accommodation where he was staying and became her missionary by taking her to people on the street, to refugees … On 11 July, he fulfilled his dream of reaching Spain and doing the Camino of Santiago de Compostela. He relates his encounters with other pilgrims … And with the Pilgrim Mother who goes through the streets of Spain with the slogan: “Come Mother”. Only now that he has communicated with schoenstatt.org did he learn that behind this slogan is another Schoenstatt missionary. —

This is Luis’ story:

For the Blessed Mother

For the Blessed Mother! This is what I cried out deep down in my heart when my body felt that it no longer had the strength to keep going. After walking 500km to reach Santiago de Compostela, I received many graces showered down by God and Mary.

The Camino de Santiago is very similar to the journey of life. We are travelers, pilgrims in time, and to walk this road well, we need to give meaning to our lives.

Each day we followed the yellow arrows that showed us the road toward our goal and where we would embrace James the Apostle which is like the embrace that God will give us when we meet Him one day in Heaven. 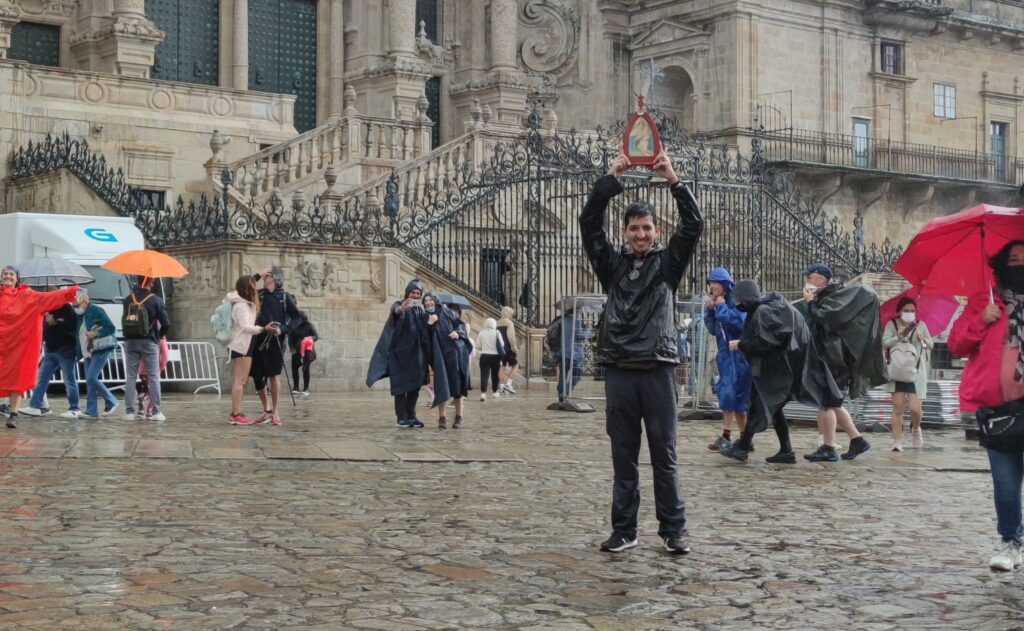 Encounters with pilgrims from all over the world

A beautiful grace of this journey is that there are encounters with pilgrims from so many parts of the world, all with different stories and reasons for walking, with whom I started a conversation, even though I did not know them, and I spoke about the Blessed Mother to those who allowed me to. I soon understood that the Blessed Mother gathered her children around her so that they know that she is always available to them. Some of them will remain forever in my heart, such as Begoña, a woman of infinite charity; Leo, the woman who carried great pain in her heart and placed them in God’s hands along the road; Luis and Nohemi, with great faith and love for the Blessed Mother and incredible trust in Divine Providence: Looking at them was like seeing Mary and Joseph. We prayed for them. I met Dionicio, who gave out flowers while keeping a watchful eye on his flock of sheep. When he saw the Pilgrim Mother, his eyes filled with tears. He kissed the Blessed Mother and prayed for his grandson David. The Blessed Mother has crowned herself as the Queen of the Camino de Santiago, she reigns over all the roads in our lives. My heart is full of joy for God the Father who allowed me to take his Mother on pilgrimage. To be the feet of Mary who visits Santiago is a gift from God, where I feel unworthy but obediently accept the mission with love.

I give my “Yes” to God and Mary because on the road I also encountered myself and I encountered God. You walk for many hours and there is time to think about yourself, your life, and to give meaning and completeness to your daily life. Thanks to God, I was able to feel his presence on my walk. It was pouring with rain when I arrived at the cathedral in Santiago de Compostela, but the sun came out and a statue of the Virgin Mary was carried in. It was an emotional moment because I felt as if I was being welcomed home. Then, after a long wait, the visit takes us to the main altar which we walked around to embrace the James the Apostle. That is when I understood that the life and effort that it took to reach Santiago was worth it and a cry leaped from my heart to the Blessed Mother! The pilgrimage does not leave you unchanged.

How she shapes the paths of her little ones

“No, I didn’t know,” Luis commented, after telling him about the creator of “Come Mother” and sending him a recent article about the arrival in Santiago. “I feel moved and speechless, now I realize that it is the same image I heard on the way (via video). God has been so good to us!”

“It is incredible how she shapes the paths of her little ones!” commented Ambrosio Arizu after he found out what this Venezuelan missionary experienced. This is the road on which the Church is lived, a Schoenstatt that goes out .