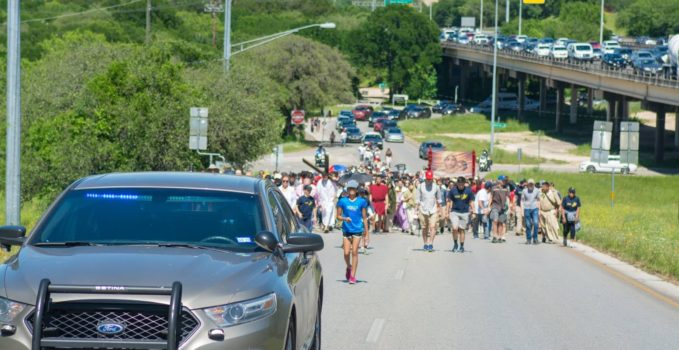 It is hard to believe that 600+ pilgrims trek eleven miles one day every year in Austin, Texas. Every Good Friday, however, Austin Catholics walk from St. Mary’s Cathedral to the Marian Shrine of Our Lady of Schoenstatt and honor Christ’s death on the cross. As my friend Cody and I directed the crowd along the Capital of Texas Highway on the 9th annual Good Friday Pilgrimage, I considered the impact this event makes on my hometown.—

Friday, April 19th, the streets of Austin became the stage for a group of sixteen Schoenstatters from the University of Texas. After a solemn blessing from Bishop Joe Vasquez, they guided the pilgrims in a reenactment of the Way of the Cross, and interpreted Christ’s passion and death. These men and women wished to be a sign of faith to those accompanying Christ. Pilgrims connected with Christ’s cross by carrying a real cross, praying the chaplet of divine mercy, and singing. “This is absolutely beautiful, and I come every year,” commented Joe Leary, one participant. 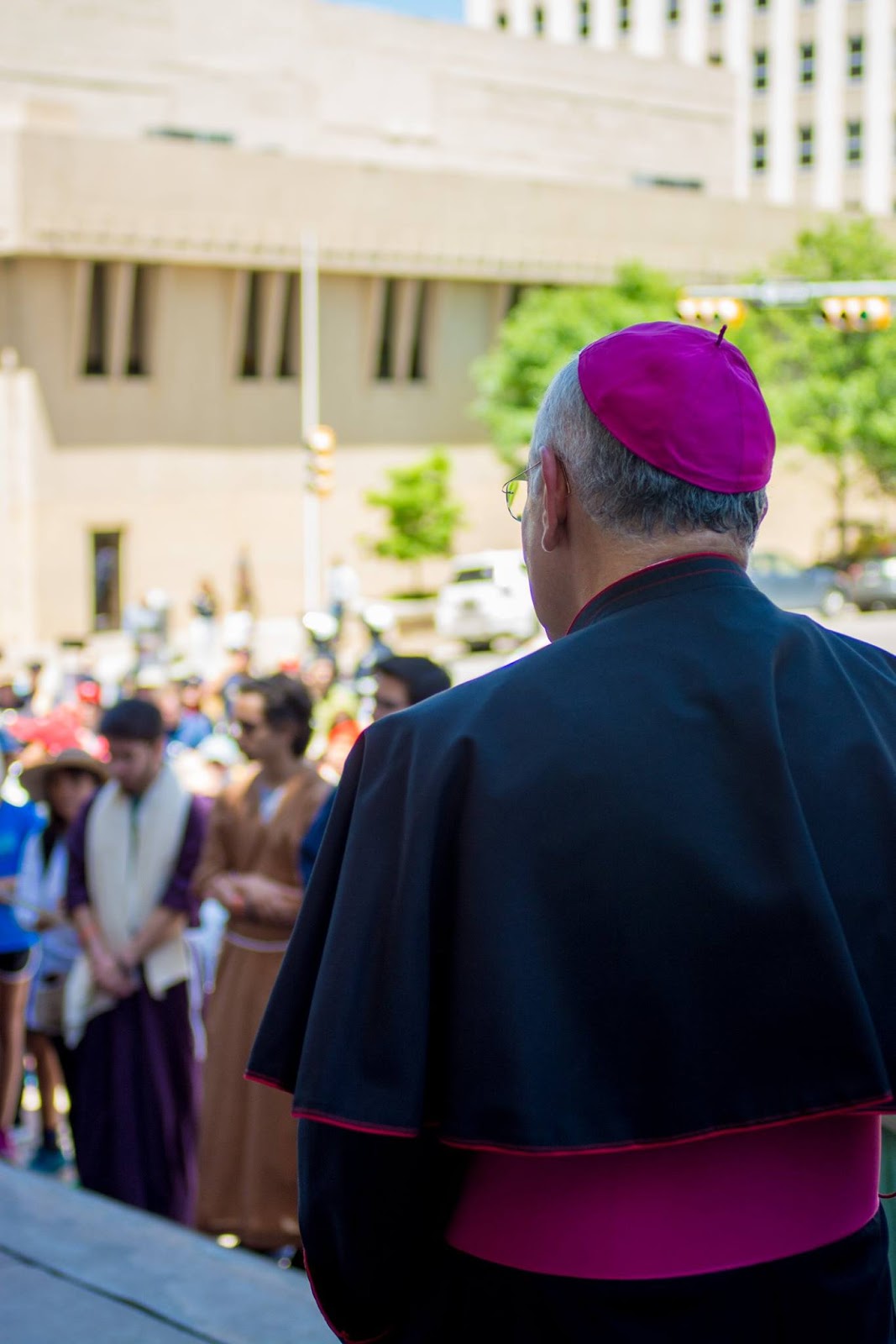 A Shepherd and his Flock: Bishop Vasquez looks on after blessing the crowd

“We impacted the city of Austin”

The event carries significance for the whole city, however. Sasha Krauss, a cast coordinator, said, “In the end, we impacted not only the pilgrims but the city of Austin as well.” Many onlookers witnessed the pilgrimage or even joined in. Transforming culture from within represents the ultimate goal.

It started with some 30 students

In 2009, a small group of around 30 University students, headed by James Van Matre and Megan McQuaid, began the Good Friday Pilgrimage. Ten years hence, the entire Schoenstatt Movement of Austin coordinates the logistics. The “GFP” has boomed and now attracts people from the entire Diocese of Austin, including San Marcos and College Station. Preparations begin in January, as the Movement coordinators plan the route and contact the police escorts. The students also start work in February, rehearsing regularly. 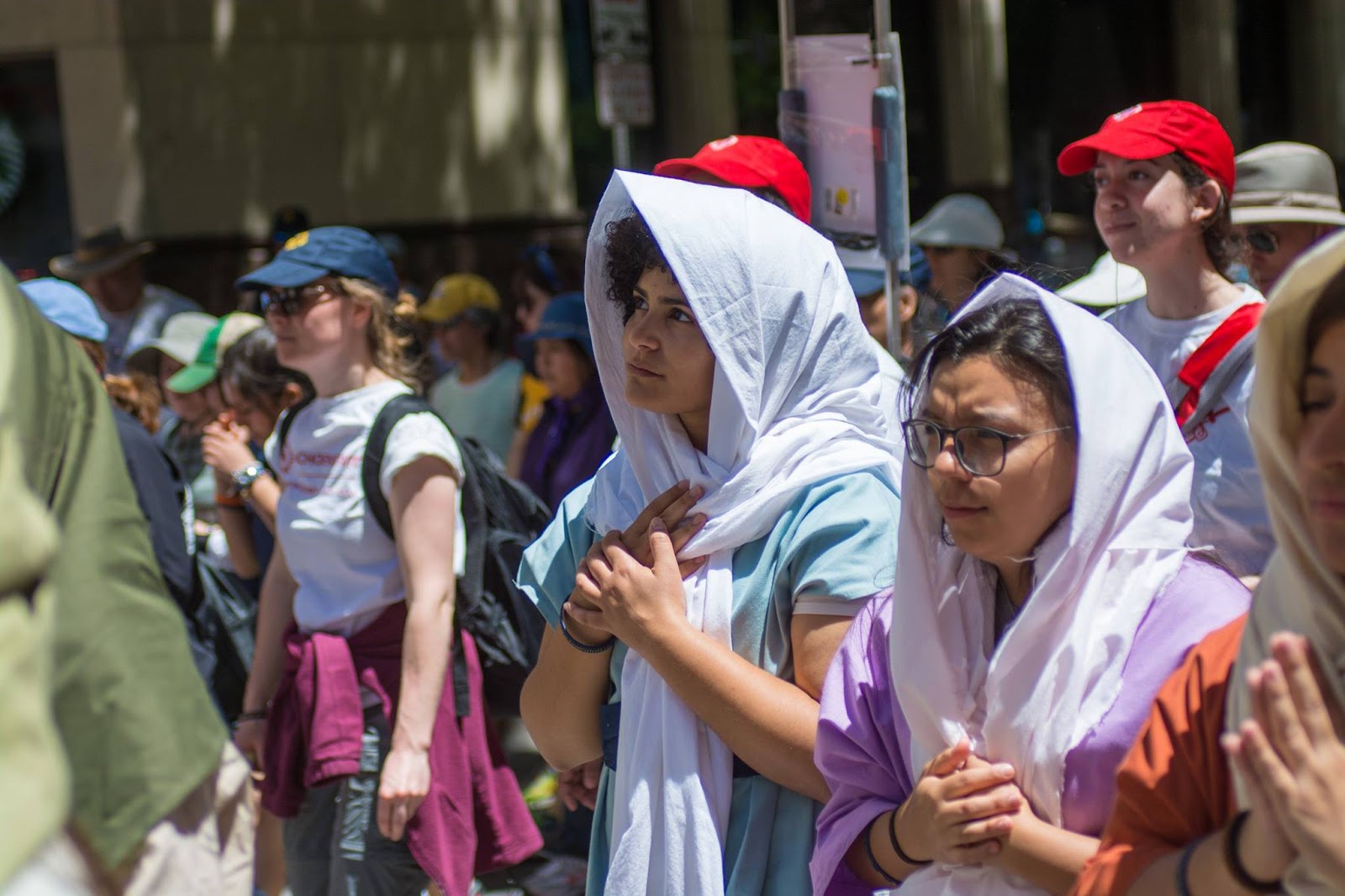 Leading the way to Christ

This year, Francine Pelaez played Mary, the Mother of Christ. “At first, I was nervous and felt almost inadequate for the role. But, through prayer and reflection, I came to realize how this calling could not have come at a more perfect time,” she explained. “I am currently preparing to personally crown the Blessed Mother, and this experience helped me to deepen my relationship with her.” Francine went on to say, “Recognizing the motherly figures I have in my life helped me to portray Mary. Realizing that she is alive in so many people in my life is what kept me going. She is always holding my hand and leading the way to Christ.” 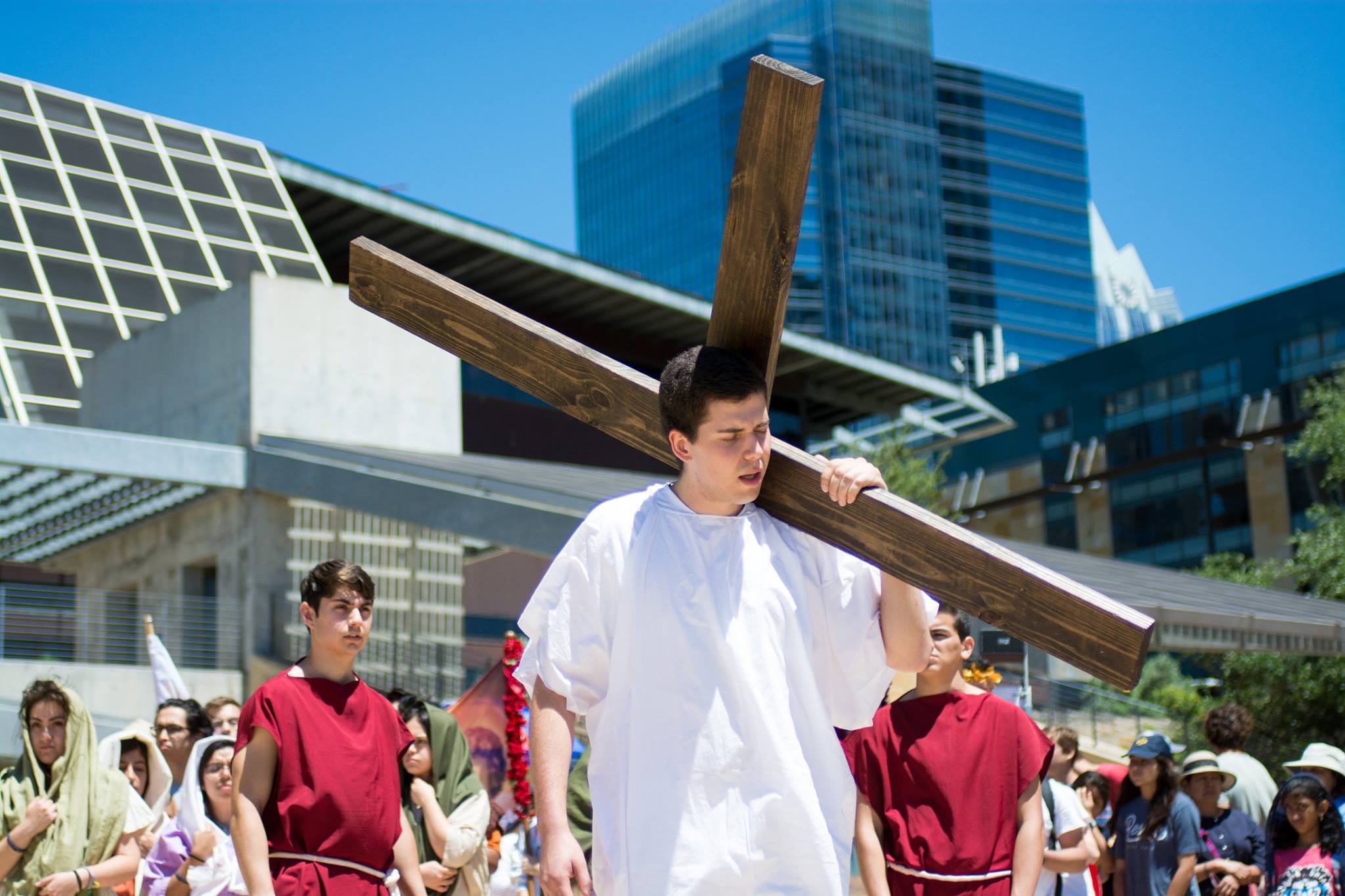 Michael McGarrity took on the role of Jesus, and underwent trials, but saw many spiritual fruits, too. “The greatest difficulty in preparing for the role of Jesus in the GFP was definitely the spiritual aspect,” he said. “The physical exertion, while notable, is not terrible. However, to be spiritually ready, to prepare to be such a literal image of Christ for so many – that was intimidating. And, as my journey proved, truly humbling.” Like for Francine, Mary became a guiding star for Michael’s hard work. “I Imagined the Blessed Mother suffering beside her son, and prayed that she would bless me with the Grace to affect people. That was my motivation,” he explained.

All the cast offered many heroic contributions to the Capital of Grace to conquer the pilgrimage from within. The Blessed Mother truly took this apostolate into her hands. 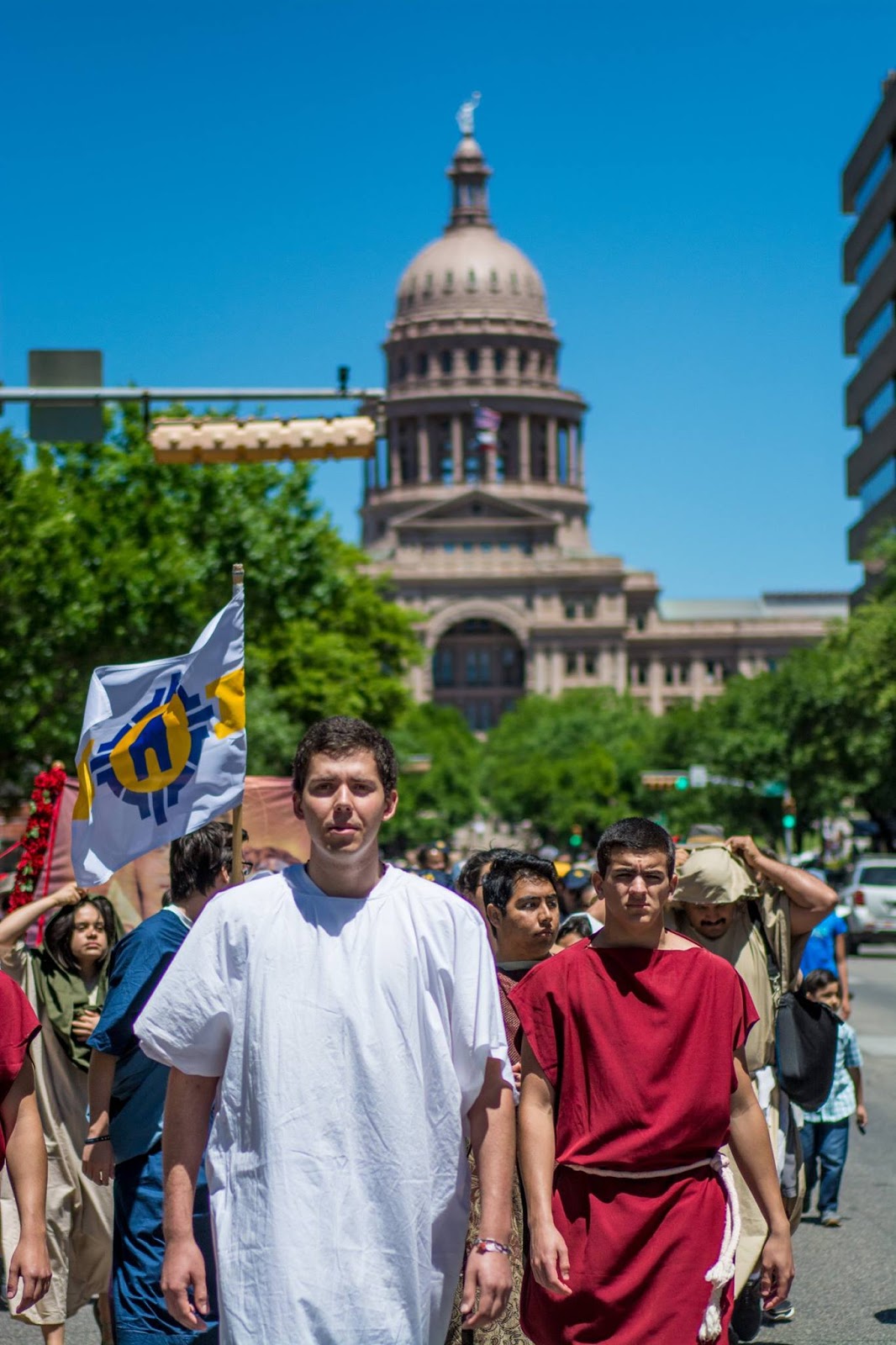 Transforming a city: Michael McGarrity, a UT student, leads the procession as Jesus