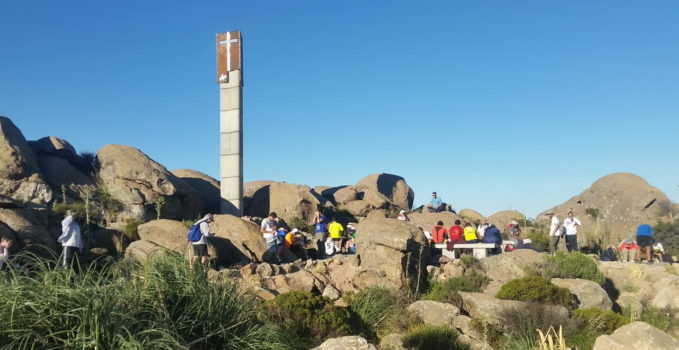 We arrived! After six days and 150 km of pilgrimage, “Brochero’s mailmen” arrived at the Shrine of the Virgen del Tránsito and of Cura Brochero, where the remains of the Argentinean saint rest.

“Brochero Road!…Following the footsteps of the Saint!” was the motto that resounded in shouts several times inside the church filled with people of all ages, all devoted to the Holy Priest. We had arrived, and we shared our joy with everyone who saw us, after the great physical effort and a Road of spiritual conversion.

Each one who walked experienced six unique days filled with experiences, and a profound encounter with God throughout the Road, always beneath the Blessed Mother’s protective mantle, whose Pilgrim Mother we carried on a platform during the 150 km traveled. 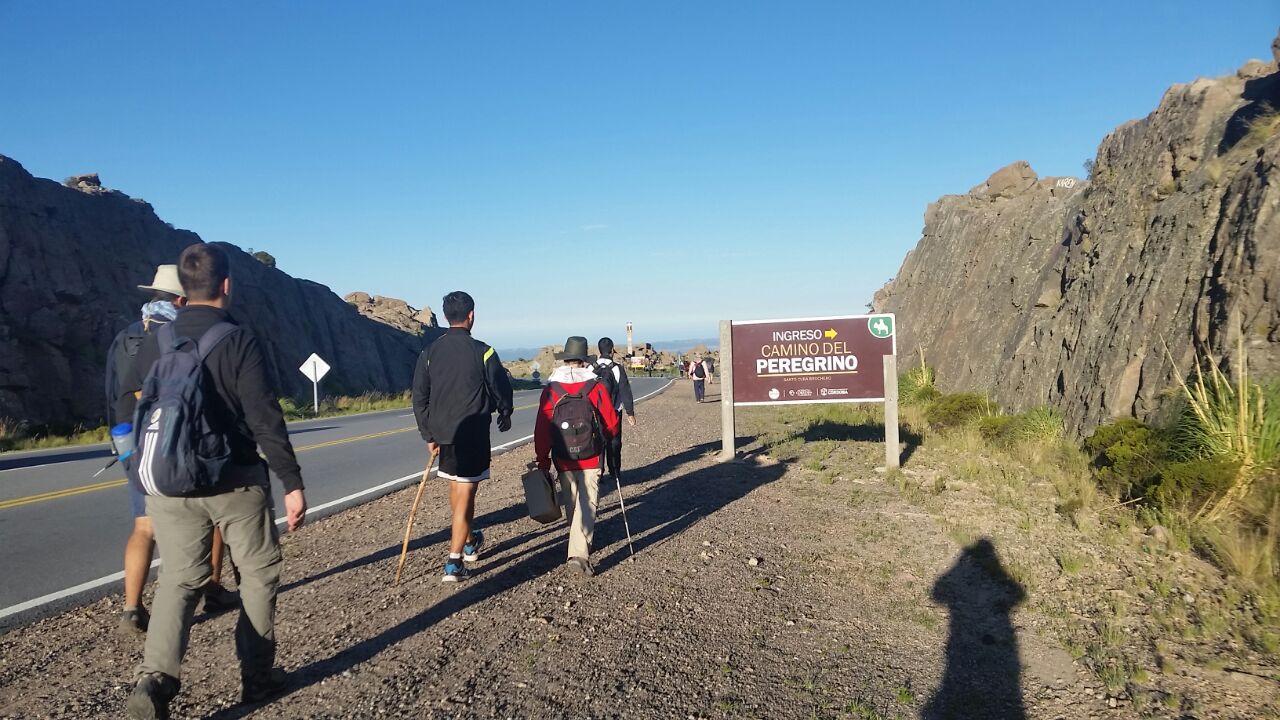 The Holy Priest walked with us

We traveled the same Road Cura Brochero had traveled countless times, taking a multitude of gauchos and compatriots to participate in St. Ignatius’ Spiritual Exercises. Besides after more than 100 years after his death, we still felt that the Holy Priest continued to travel with us.

That is how it was! The picture of the Priest welcomed us at the Schoenstatt Shrine in Córdoba, and it waited for us in the Metropolitan Cathedral, and through pure providence, we arrived at Mina Clavero on the exact day of the Solemn Dedication of the Church in his honor, the first one in Argentina, and the world. We participated with the young pilgrims as “Cura Brochero’s guests.”

It was a satisfaction and an honor to arrive at the tomb of the Saint and to present to him in person all the prayers and petitions entrusted to us by so many devoted followers during these days. We are very grateful to be Brochero’s “instruments” and personal “mailmen.” 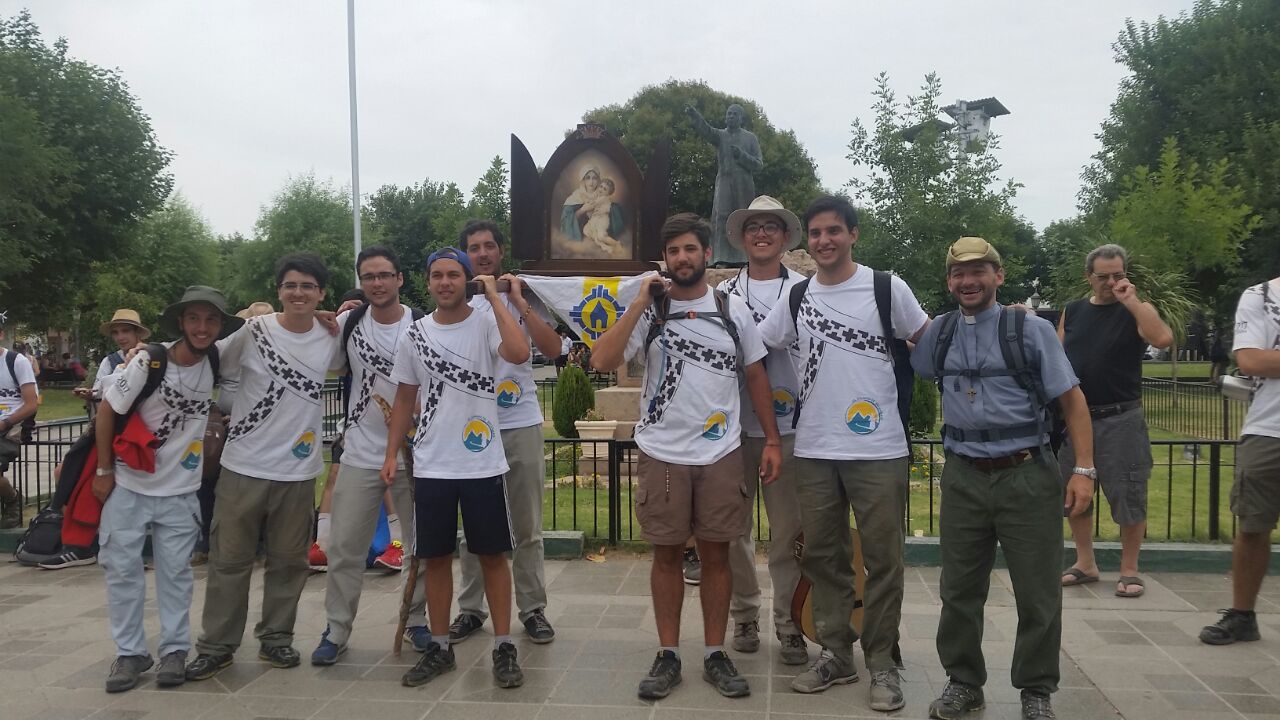 Brochero’s Road was a school of life

Each one of us had very profound personal experiences, where we experienced God’s grace, and our desire for holiness was renewed, following Brochero’s footsteps. I share some testimonies of what this Road meant  to these young men:

“For me, “Brochero’s Road was a school of life; I had every kind of experience on it. As a member of the kitchen team (we were 3 for 62 people), I wanted to “spoil” the pilgrims as much as I could, to always be at their disposal and to take care of all their needs. Obviously I could not keep up, I placed the bar very high, and I became nervous when I felt I could not fulfill what I had proposed for myself. However, a Schoenstatt motto states, “Nothing without you, nothing without us” and the Blessed Mother “gave her all.” She worked wonders and marks were made from the weariness of the team, rising an hour earlier to make breakfast and going to bed two hours later after preparing lunch for the next day. I returned with sixty-two brothers, sixty-two of the Blessed Mother’s soldiers with whom I would walk a thousand more times.” (Franco Gutiérrez, Córdoba, kitchen team). 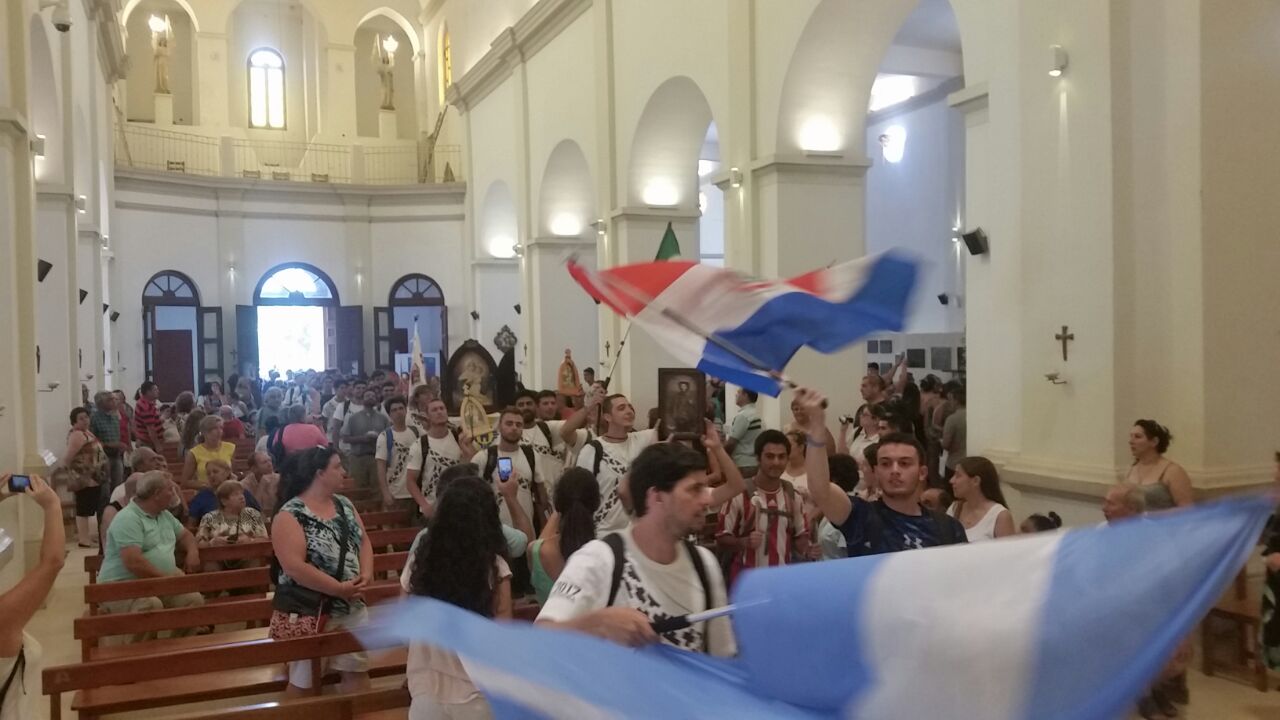 “This trip began with a yes to God just a few days before, without knowing what I was getting into or why. At the beginning, only with the firmness of being a simple mailman traveling the Road, praying for those petitions, and with the certainty that God had called me for something. I believed that perhaps, that through my experience, I would be a humble little shepherd herding sheep or walking by his side, but on the Road, I discovered I had hidden wounds from the past that I should heal. The silence and prayer, along with service and pain were God’s hands mending a vessel that came with bruises and had more than one chip, and many times, those hands were those of another pilgrim. The landscape allowed one to see God in every direction and it made us small before such immense beauty. Undoubtedly Jesus walked with us, and he allowed himself to be seen in every pilgrim or in every person who offered us water or simply encouraged us so, we would not give up. An angel in the form of a little dog never left us alone; it accompanied us almost all the way. I was branded by fire when I arrived at Brochero’s Church, and I saw St. Roque (accompanied by a dog). The arrival at the Holy Priest’s town cannot be explained, since words cannot describe such great joy and emotion. When I returned to the Shrine, a gesture was born within me: I knelt, I placed my hand on my heart, and then on my mouth, blowing like one blows a kiss, and giving my heart to our Mother as in the Covenant of Love.” (Esteban Cabrera, pilgrim from La Plata).

A madness that transformed into wanting to live everyday sanctity

“150 km in broad daylight, during vacation time and walking 30 km per day seemed madness. Yes, it was madness, but out of love. It was a madness that became: a fraternity and solidarity, sharing and walking. During those days, we were sure that we did not walk alone, that Mary was present in every event, in the attachments, in nature that surrounded us, in prayer and that Fr. Brochero was riding his mule, “Malacara” over the paths we traversed. A madness transformed into a desire of wanting to live the holiness of everyday sanctity in a concrete way and lived day-by-day, with simplicity and giving of self. A madness that was transformed into a praying community, where many souls placed their petitions and desires into our hands, and they passed to the hands of our Gaucho Priest. We understood that many times, life is made on a day of 30 km. Where blisters develop, and it hurts to walk, where the heat is unbearable, and it makes us want to abandon the Road, where I am disillusioned at not seeing the goal close, and it makes me lose hope. All this can happen in our daily life, but we do not walk alone, we walk with many other Covenant brothers/sisters, we walk by the Blessed Mother’s hand, we walk by the hands of the saints, and God leads us on his Roads in a providential and merciful manner.  Once again, the Brochero Road encouraged us to struggle for holiness, to transmit it and live it in our lives.” (Juan Elías, Córdoba, spiritual team). 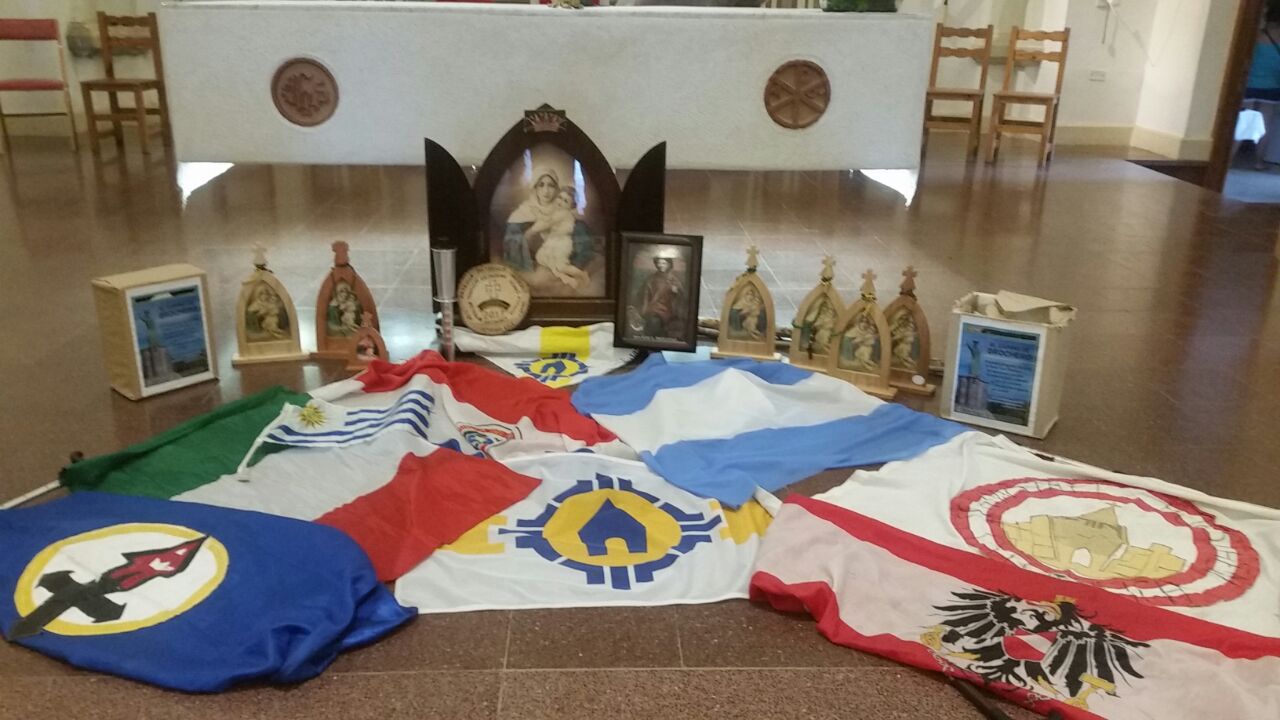 Brochero: an inspiring model of a holy priesthood

“For me, the pilgrimage was an encounter with God, with brothers and myself. To discover the holy and fruitful life of Cura Brochero was a grace that these encounters provided. We prayed a lot on the Road and every step was offered for many petitions, I loved that. I take new friends and an inspiring model of a holy priesthood from these days.” (Lucas Chiappe, Seminarian of the Schoenstatt Fathers).

When it ended, I realized that my Road began now

“Brochero’s Road, following the Footsteps of the Saint. This is how this great adventure began.  It is difficult to put the experiences into words that touched our hearts deeply. It was really something incredible. At the beginning, I did not understand too much, however I decided to open myself to what my brother pilgrims and I were undertaking. The Brochero Road left a lot in my heart; the footsteps began to become a reality in me. When we arrived at Cura Brochero’s parish, I thought: ‘Everything ends here.’ However, I realized that my Road was just beginning and Cura Brochero was only the great instrument who opened a new door.” (Juan Cruz Colombo, Boys’ Youth from Resistencia, Chaco, Argentina). 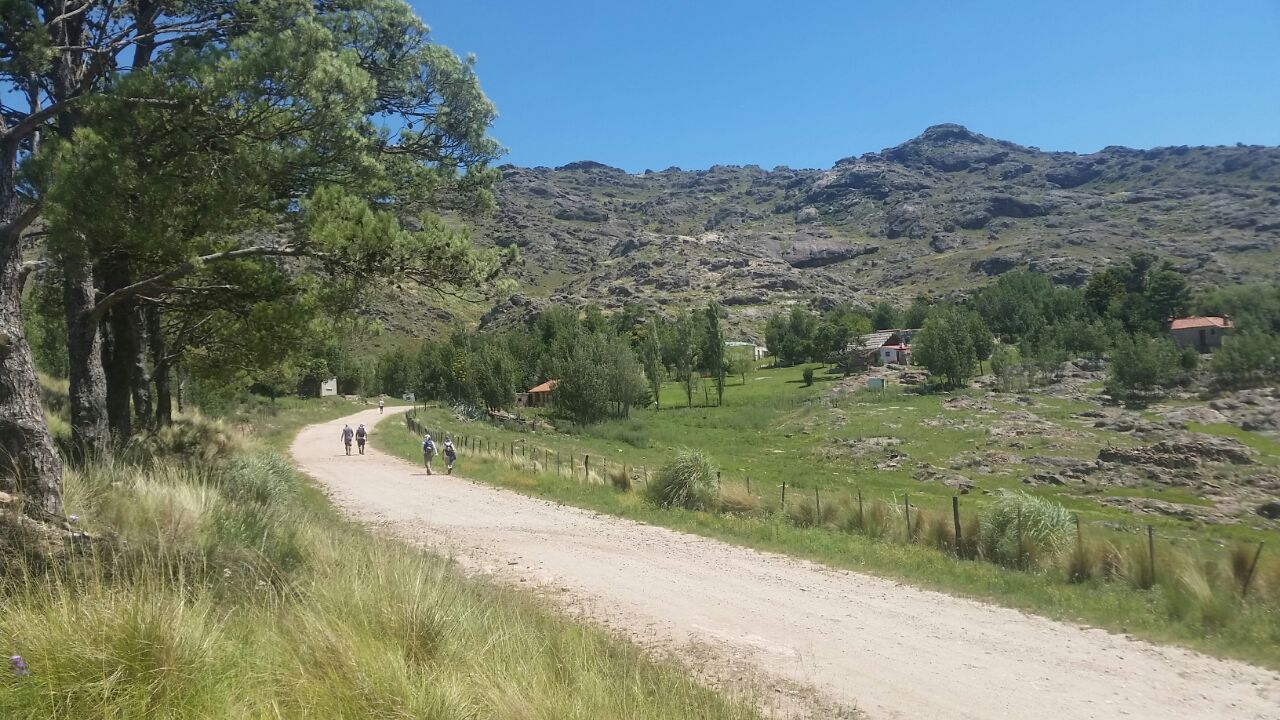 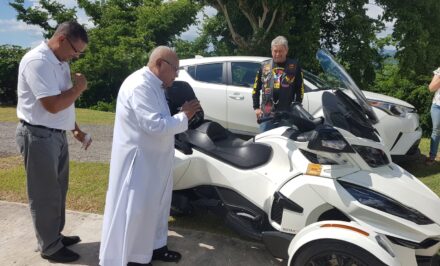