Posted On 12. October 2016 In Projects, Schoenstatt - Reaching out

“Someday, people will leave the fields to join this pilgrimage” 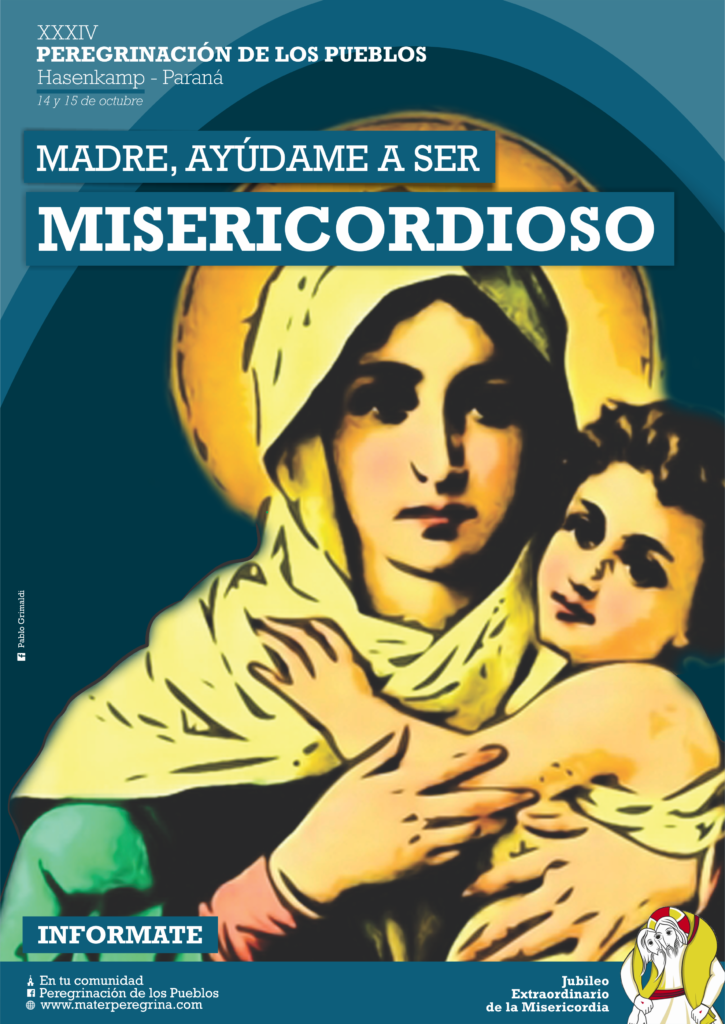 Argentina’s longest Catholic pilgrimage’s XXXIII year, christened as the Pilgrimage of Towns, uniting Hasenkamp with Paraná will be held on the 14-15 October.

Every year, a motto motivates the pilgrims; the phrase chosen for 2016 is “Mother, help me to be merciful.”

Like every year, the Blessed Mother convokes thousands and thousands of pilgrims at the Hasenkamp Wayside Shrine on the eve of Mother’s Day, to take them by the hand, and walk with them for 26 hours until the new sunset.  The smallness of the instruments, the magnitude of the difficulties, and the greatness of the supernatural fruits, annually confirms Mary’s love manifested in a special way in this event.

The Church as a whole is lived out in every step taken. The faithful from parishes, seminarians, priests and religious, sisters, and people from church movements offer the best of themselves that makes this pilgrimage a real-live experience of the Church on the move. Each year as a family anew, it is reflected in the thousands of faces seen on the road, joined by the same spirit, one Faith with the same destination: the Schoenstatt Shrine of the Mother Thrice Admirable.

Two people knew how to hear God’s will, and they showed their love for Mary by initiating this pilgrimage.  They were Amelio Rodríguez and Jorge Quiroz, two young men who belonged to the Schoenstatt Boys’ Group from Hasenkamp.

In 1983, they were preparing to seal their Covenant of Love with the Blessed Mother, and they decided to visit her in the La Loma Shrine in Paraná, but in a different way. They renounced comforts and transformed their desire into an odyssey that would be a unique, special event.  They proposed to unite the 90 kilometers (55.9 miles) that separated Hasenkamp from Paraná on foot.

Water was a sign that marked this pilgrimage from day one.  Initially, a strong storm caused them to abandon the walk, but the following weekend, Jorge and Amelio once again set out for the first time as pilgrims to meet “the patroness”  (as they called the Blessed Mother), in her La Loma house, which is of course the Schoenstatt Shrine.

“Someday, people will leave the fields to join this pilgrimage…”

Half-jokingly, half-seriously: “Someday, people will go out from the fields to join this pilgrimage”…One of the two young men decided to express a thought that had the smell of utopia. However not much time passed before that something became a reality.  Moreover not only was it people from the fields, but, little by little, there were those from towns in the diocese and those from beyond that joined– hence the name –Pilgrimage of Towns.

During the first years, there was no set date for the pilgrimage. At Bishop Karlic’s suggestion, and to the effect of incorporating it into the diocesan calendar, the date was set for the Friday and Saturday before the third Sunday in October.

There is a substantial network of helpers who also go on pilgrimage. They are firefighters, police, nurses and doctors. Those who provide water, people who help with parking, the Cursillistas who prepare breakfast, volunteers who prepare the torches, people who organize each rest stop, those who go out to the encounter to offer a little water, and people who prepare the crowd’s arrival at La Loma, everyone who collaborates spiritually and materially accompanying in prayer throughout the trip.

By the hand of many volunteers

There are always volunteers above the age of 18 helping people on the Pilgrimage of Towns.  These volunteers with their classic yellow vests are young adults who accompany the pilgrims throughout the journey.  They are in charge of making the lines in collaboration with the cadets from the Salvador Maciá Police Academy, distributing the torches, calling ambulances or for assistance when someone can no longer continue to walk or needs transportation to the next rest area, or to offer massages for pilgrims’ tired feet.