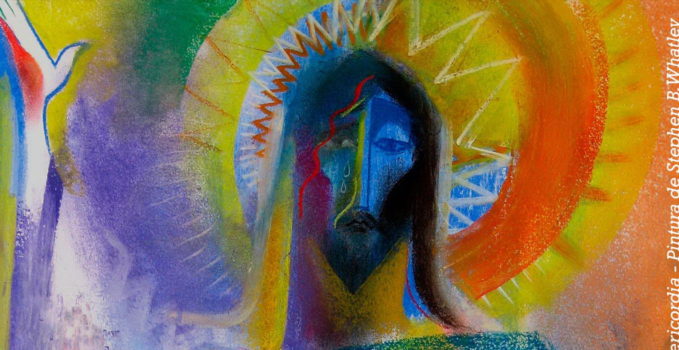 Mercy Project: an initiative inspired by this Jubilee

During this Holy Year, music, mercy, art, disability, talent and solidarity united in a project that a missionary of the Pilgrim Mother in Bolivia was encouraged to launch in favor of children with disabilities from a small center of El Alton, where people with serious physical, cognitive, sensory, and psychosocial difficulties are attended.

How did the project emerge?

In Bolivia, from the beginning of this Holy Year, people with disabilities carried out repeated complaints to receive more economic help from government authorities. To demonstrate their needs with vehemence, a large group of representatives from all the country’s regions marched on foot and in wheelchairs in a caravan for hundreds of kilometers to government’s headquarters.  Initially they set up in Plaza de San Francisco and after their tents were cut, they remained for several months in the streets adjacent to the Plaza Murillo, the place where they hoped to meet with the President and Vice-President.  Unfortunately, the government did not allow their entrance, and did not listen to their petitions. However, many people tried to help them with food, clothes, tents, utensils and blankets, because it was very painful for many, to see the precarious conditions that they faced. According to a UNICEF study, only 20% of the people with disabilities in Latin America begin their studies in secondary schools. In Bolivia, the situation is much worse. Before this harsh reality, Fabián Aguirre, a missionary of the Pilgrim Mother in La Paz, who is a composer and a Catholic singer-songwriter, was encouraged to carry out a small work of mercy to raise money on behalf of children with disabilities through a musical project. 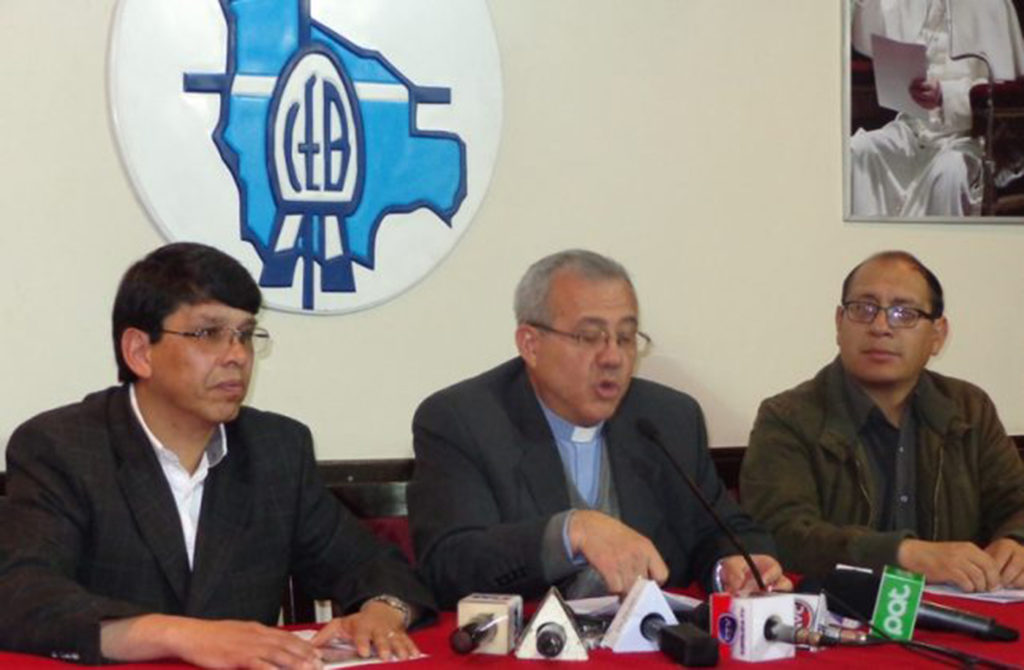 Presentation of the project

What is Mercy Project?

A musical CD of seven songs in pop and rock rhythms was produced to raise approximately $2,300 on behalf of seventy-three children with disabilities, who receive support from the St. Martin de Porres Center, a center with limited resources, located in the Huayna Potosí area of El Alto.  The record is already available in music stores and has the participation of several very talented musicians and artists, who with the spirit of solidarity were encouraged to participate in the recordings without charging a penny. Among others, professionals such as Marco Maciel, of the Bolivian rock band, Electroshock, interpret the songs. Montserrat Arce, ex-vocalist of the group Antología, Jose Luis Duarte tenor, Susana Renjel soprano, baritone Marcelo Aguilar of Compañia Lírica, and other singers such as Daniela Arteaga, Micaela Galdo and Omar Sanjinés (leader of the choral group, Sintonía Vocal).

Thanks to the selfless support of other collaborators, this record also received the backing of the Bolivian Episcopal Conference and of the Bolivian Social Cáritas Ministry. It will receive the funds and is in charge of determining the center’s chief needs, and to obtain materials and tools that will improve psychomotor function and stimulation of children with disabilities.  Fr. Jose Fuentes Cano, Deputy Secretary General of the Bolivian Episcopal Conference, officially launched “Mercy Project” on 13 September.

You can see the launching of the CD here:

The record has the English Catholic expressionist painter Stephen B. Whatley’s illustrations and Italian-Bolivian painter, Ana María Dalenz’s work as well. It also includes two unpublished songs about mercy entitled “Espero que alguien” (I hope that someone) and “Eterna es tu misericordia” (Your Mercy is Eternal). Moreover it includes three prayers set to music –Soul of Christ, Divine Mercy Chaplet and the Traditional Gloria of the Holy Mass, and a poem (Eucharistic Verses about the death of a Nicaraguan priest, Azarías Pallais) and a song of praise (Hosanna to the Son of David). All brothers/sisters who want to support this small work of mercy can obtain the record for only $7.00 at Spotify and Deezer, among others.

Samples of the songs can be found at:

(English translation of titles below and the artists’ credits)

All the songs are prayers set to music.

Song 2 is the prayer that is generally sung after forgiveness, during the Holy Mass.

Song 4 is a paraphrase of the prayer Jesus taught St. Faustina Kowalska.

Song 6 is a paraphrase of St. Ignatius Loyola’s prayer 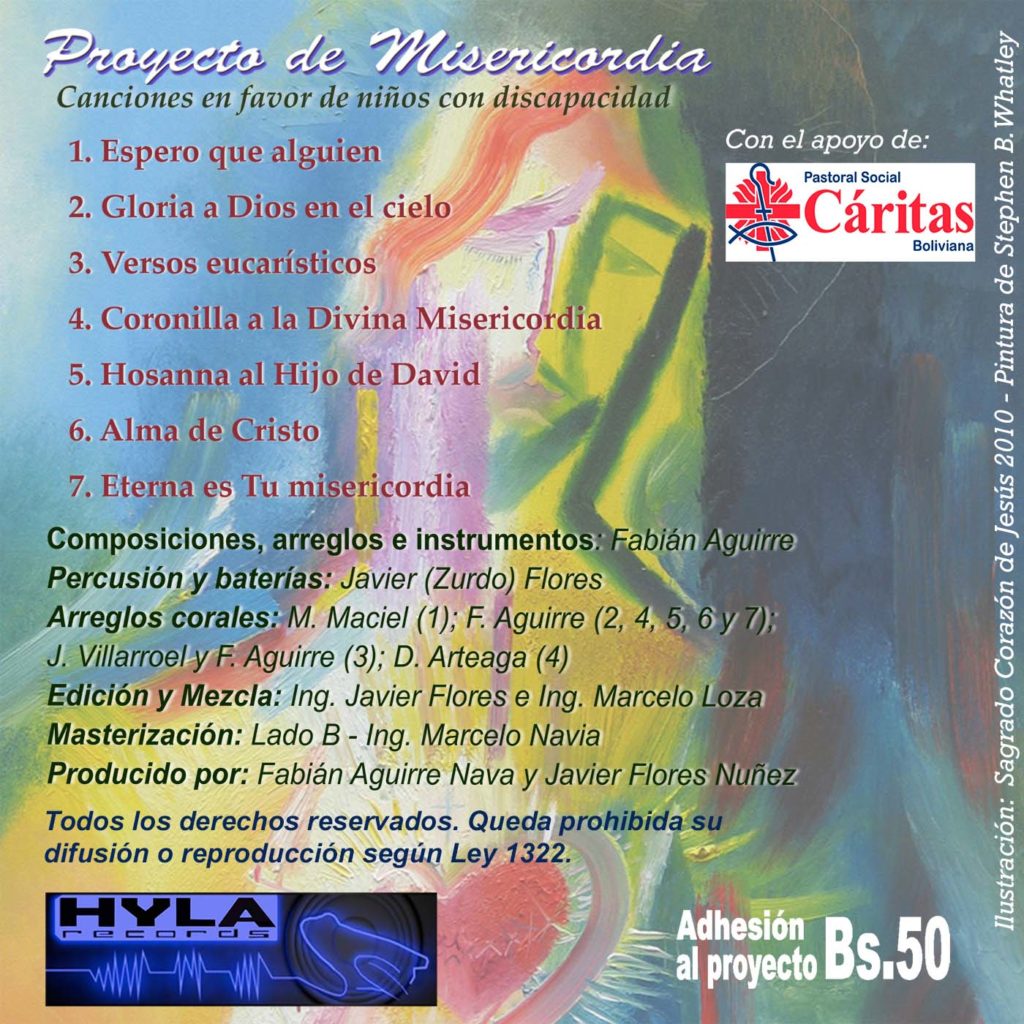