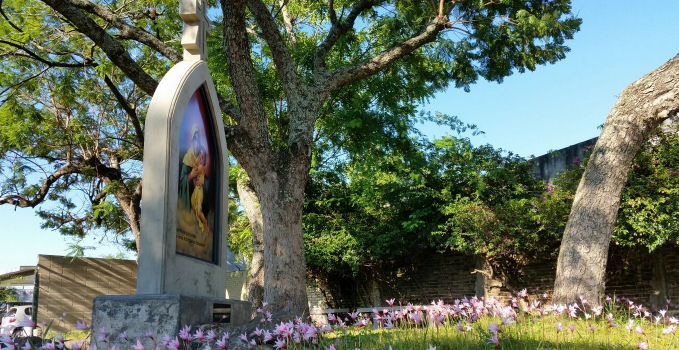 The Blessed Mother’s “doings” at Salto

Although not everyone sees it, many believe that the Salto wayside shrine was the Blessed Mother’s dream for many years, long before these past two years when we were working on “conquering” it strongly within the groups.

Why do we believe this?  Because as the days pass, we are becoming aware of more stories that associate the Blessed Mother with this little square, this area, with the neighborhood and its people. 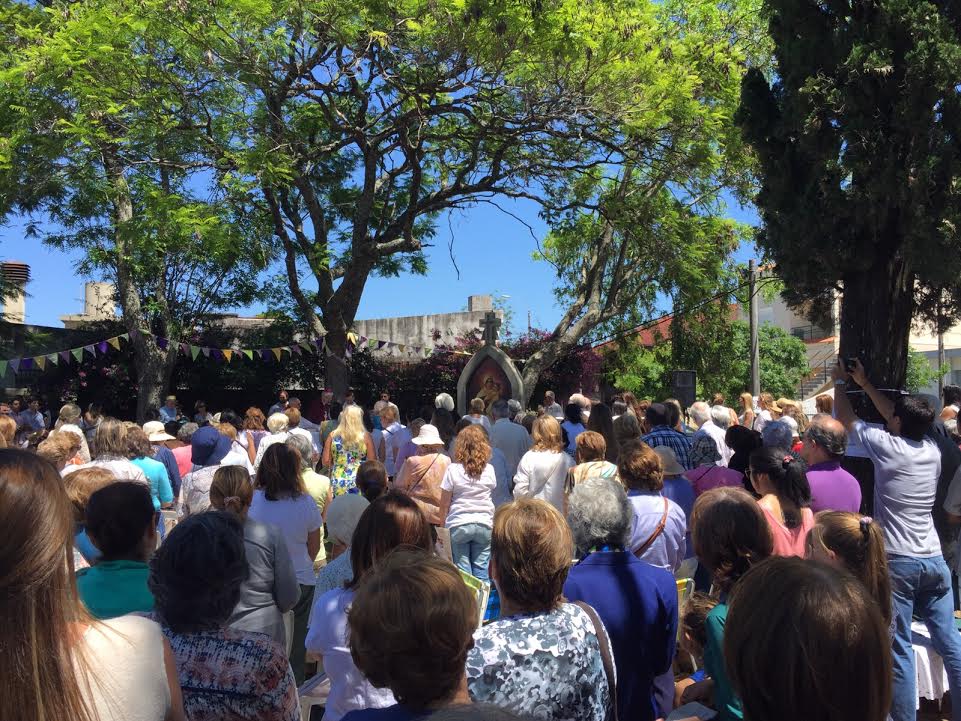 Day of the blessing

A dump– transformed into a shrine

Let us recall:  The Bishop of Salto, Pablo Galimberti blessed the Shrine of Our Lady of Schoenstatt that is located in Salto on Belén and Zorrilla streets, on Sunday, 6 December.  Fr. José Garcia, from the area where the wayside shrine was built, along with Frs. Facundo Bernabei and Dario Gatti of the Schoenstatt Movement con-celebrated the Mass.

During the homily, the bishop assured that transformations are possible “if everyone assumes their responsibilities, and we live Christian values coherently day by day.”  In this sense, the Shepherd called for the personal commitment of neighbors and of society to “take care of the environment around this common house, which belongs to us all.”  The installation of the wayside shrine in a neglected little square transformed a dump into a shrine.

During the offertory, two men offered the tools used to build the wayside shrine, the alumni of the Mater Ter Admirabilis School (which operated in Salto) offered the Pilgrim Mother as a symbol of their loyalty.  The young women from the Schoenstatt Mothers’ Branch offered a rosary as a symbol of the prayer that united them every Thursday, some little girls offered the participants’ petitions, and other youths offered the bread and wine for the consecration.

The construction and installation of the wayside shrine were possible thanks to the efforts of a group of people from the Schoenstatt Movement, who had this dream for many years.

Where the flowers bloom among the stones 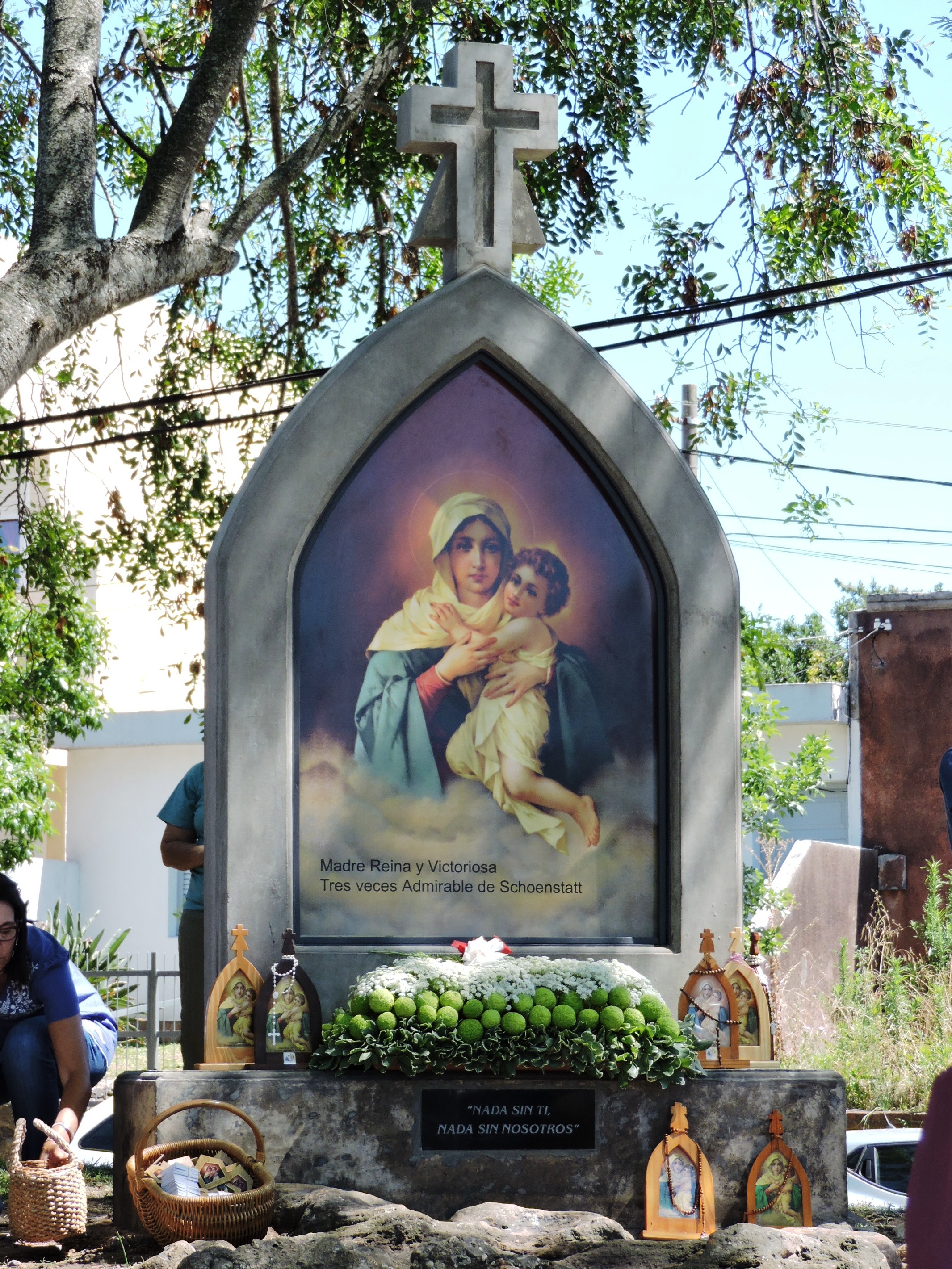 “The little girls” (now women) who attended the Mater Ter Admirabilis School (of the Sisters of Mary) that was in operation in Salto for more than 70 years, played in the little square where the Blessed Mother now is present. They cried with emotion, when they saw that the wayside shrine was installed exactly where there was a jar of flowers (Martagon lilies).  They thought we had intentionally chosen the site.  They told us, “Great! You chose the perfect place for the Blessed Mother, where the flowers bloom among the stones!”

The truth is that we did not choose the site.  We had chosen to locate it on another part of the square, and the city administration changed it because they did not consider it appropriate, and they located it where it is…on a field of lilies.  The Blessed Mother’s doing…

We have also found out that several groups/commissions had presented proposals for years, for the use of the little square, and the proposals were never accepted.  Only the Blessed Mother’s proposal was accepted, which is very rare, because no one expected our lay government to accept it. However, all the obstacles were overcome and the departmental junta almost unanimously approved the construction of the wayside shrine!  The Blessed Mother’s doing…

And there is more… we found a very old frame with a painting of the Covenant of Love by Irma Ulmer at the Cerro parish, where the wayside shrine belongs.  The frame has a note that tells about the construction of a wayside shrine of the Mater Ter Admirabilis.  The frame has hung in the parish rectory for more than 70 years!  The Blessed Mother’s doing…

Since the blessing of the wayside shrine, different prayer groups have “adopted” it to go to pray.  So there are people praying there every day; they take flowers and they light candles. Moreover, “her doings” are transforming hearts and listening to everyone’s petitions that come to seek her intercession in her little square.  It is a great joy to see that the atmosphere of the Shrine is experienced and the Blessed Mother’s graces are realized in everyone.

God willing we will have many more stories to share in the future. 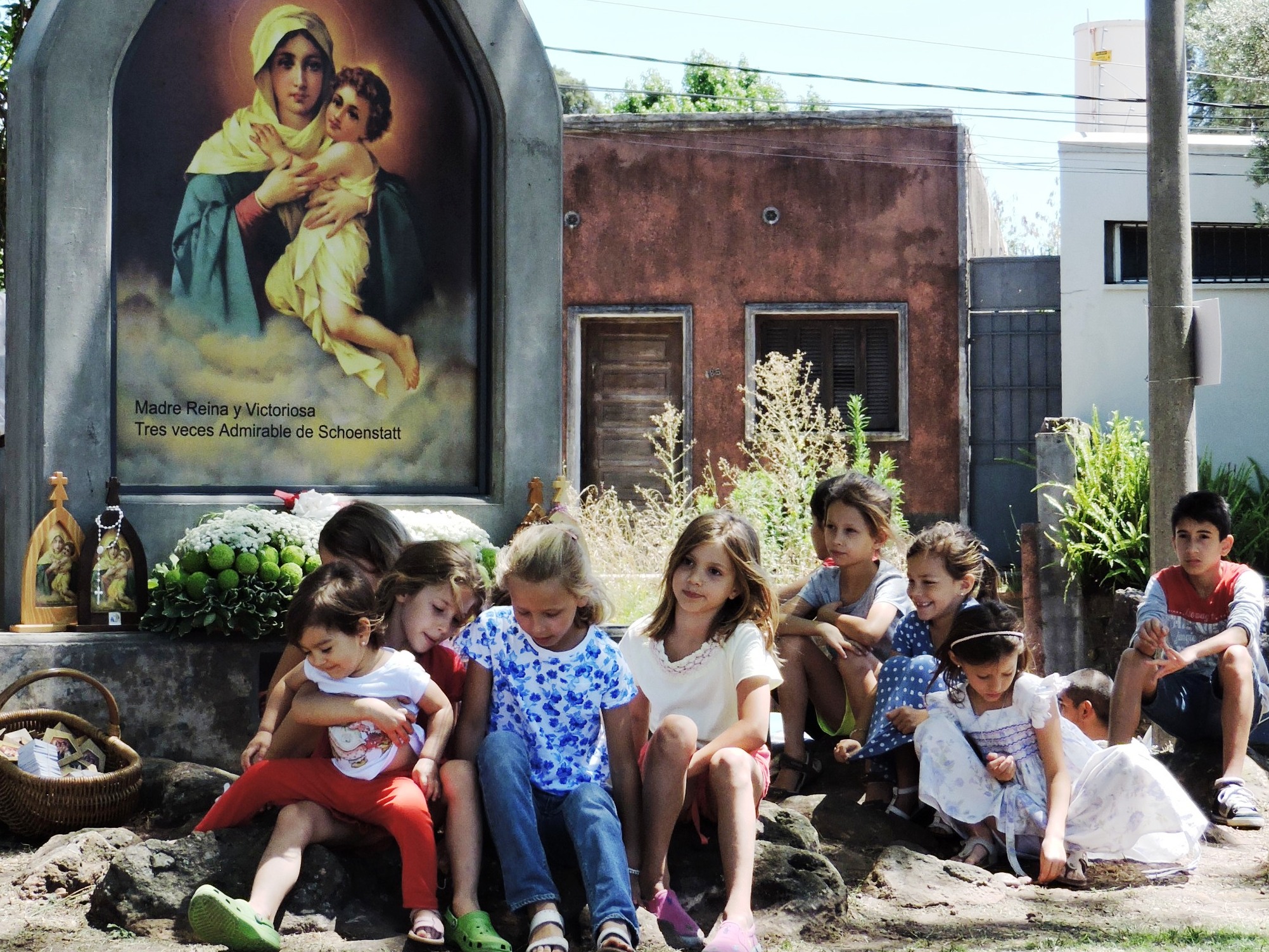 Source:  Schoenstatt Bulletin from Uruguay with material from: http://iglesiacatolica.org.uy/