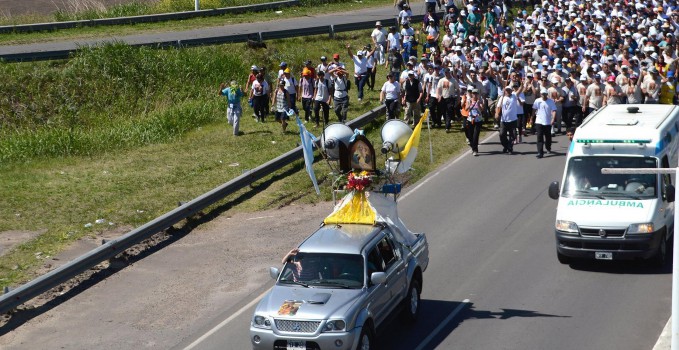 More than 25,000 people participated in the Villages’ Pilgrimage

The first pilgrims began arriving at La Loma Shrine around 7:14 p.m., south of the city, in the Paracao neighborhood, the final point in the 33rd edition of the Villages’ Pilgrimage that began 5: 00 p.m. on Friday from one of Hasenkamp’s access roads.

They arrived exhausted, some were crying, using canes, or leaning on another person’s shoulder, others sang, with arms raised. The conclusion of a laudable demonstration of faith that gathered more than 25,000 people – the majority young people – on a 90 kilometers’ [almost 56 mi.] walk lasting a little more than twenty-five hours just like it has since 1983 when the Hasenkamp – Parana pilgrimage began.

According to the head of the police department, Mario Leiva, at the beginning there were 8,000 to 10,000 pilgrims, but as the walk progressed, more people joined from different towns along the length of the road: El Pingo, La Picada, Sauce Montrull, and especially those who arrived from different points in the province.

The organizational team pointed out that upon entering the city there were more than 25,000 in the final stretch from the next to the last stop at Sauce Montrull.

Attentive to these times, the Church broadcast a continual live transmission via the curia radio station, FM Corazón [FM Heart], and there were posts on social networks sites, mainly Facebook (by the end it was very little). Moreover this year, a drone was incorporated that took aerial photographs of the pilgrims’ departure. 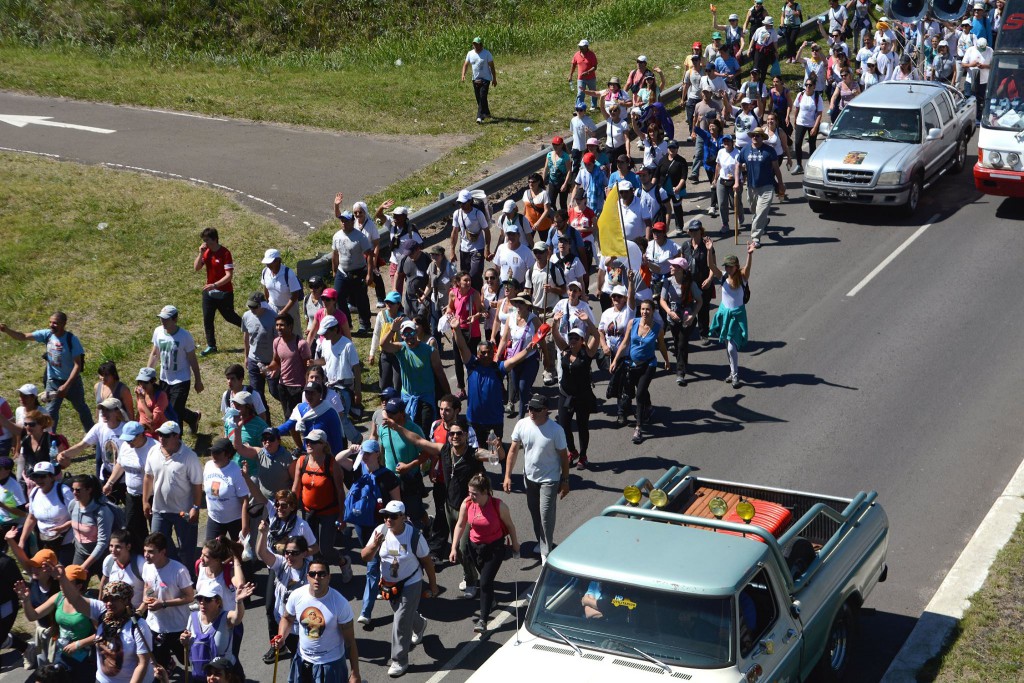 They prayed, they sang…

They prayed, they sang, they took selfies, they stopped on the side of the road, and they sought atonement for their sins: there were a half-dozen priests confessing pilgrims at an inconvenient time.

A priest, who was among the servants this time, commented:

“I have experienced this pilgrimage in many ways: I have walked, I have given encouragement from the mobile center, I have accompanied by confessing…but I have always been in the middle of the march. These two years have been different. The parish servants are almost at the margin of what is happening throughout the journey’s route. Most of us have made the walk, so we know exactly what is happening at every moment, and we accompany them with our imagination. However, we hardly enjoy any of that. When we arrived or departed, we worked for a while. As the pilgrim arrives, they are taken care of, and their weariness is respected. Most of our time was spent chatting while we waited for the arrival of those who walked. Being attentive of others carrying out what Jesus said in the Sunday Gospel:

It is simply another way to go on pilgrimage. And I like it as much as the previous experiences. It is definitive, as we said sometime ago, the Pilgrimage is the Church marching as the Body of Christ: that is the reason all of us go together…some walking…others serving…everyone participating.” 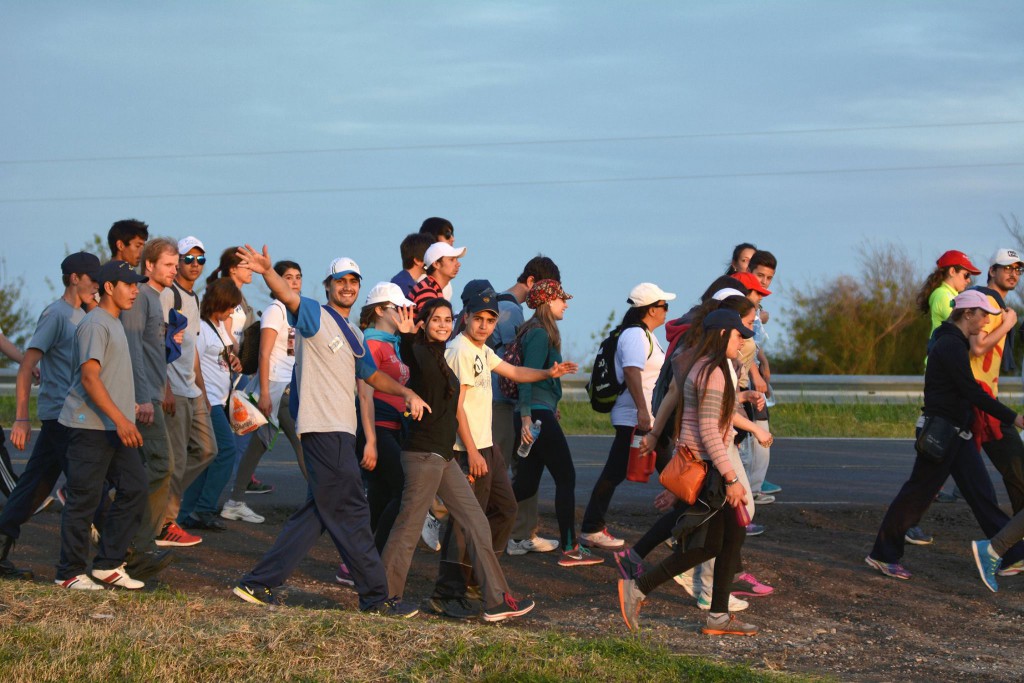 “What kind of world do we want to leave to those who come after us?” (Pope Francis, Laudato Si, #160)

The Mass began at exactly 7:00 p.m. at La Loma’s Marian Shrine; Archbishop of Paraná, Juan Alberto Puiggari, who gave a short homily, celebrated. The homily was brief, concise and direct; it was closure for the pilgrims. He spoke about this year’s motto for the Villages’ Pilgrimage– Mother, help us to take care of the created world, and he asked Catholics to “listen attentively to this urgent call by the Church – through Pope Francis’ voice –to avoid the destruction” of the planet. “What kind of world do we want to leave those who come after us?” (Pope Francis, Laudato Si, # 160) The environment is a concern for states and governments; he pointed out everyone can make a contribution. “All of us can collaborate as instruments of God for the care of creation,” he said in his homily.

In this order of ideas, he urged that we consider “changing attitudes” and he extended this thought to social life. “We should work for a culture of encounter and of social friendship among Argentineans, Puiggari proposed, and then he referred to the elections on Sunday 25 October. “May the election no longer divide us, may it commit us to work to have a bicentennial of a reconciled Argentina.” 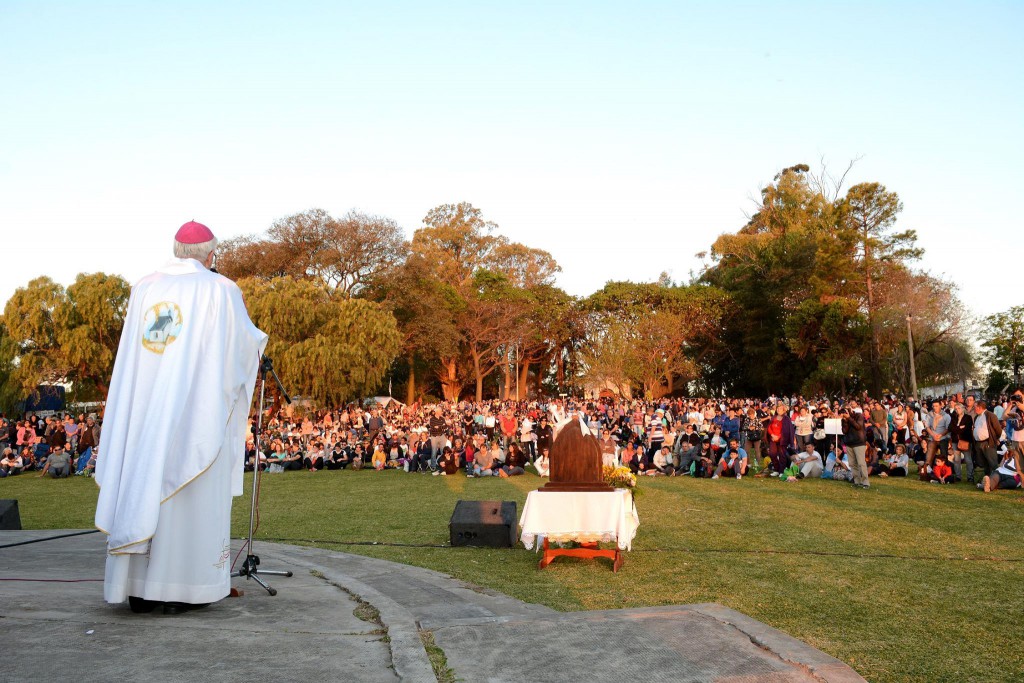 The 33rd edition of the Villages’ Pilgrimage was on 17 October. Beginning in 1983 and promoted by two young people from Hasenkamp, who belonged to the Schoenstatt Apostolic Movement, it was a tribute to the Blessed Mother. At that time, it consisted of Jorge Quiroz and Amelio Rodríguez, by the second year, there were more, and so each year, new pilgrims were incorporated, until it has become massive.

Now it has its own structure, and an army of collaborators that has made it grow into a well-oiled and smoothly run organization. It was not held in 2004 and 2006 due to bad weather, and again in 2012, it was rescheduled because of rain.

This year the weather was favorable so attendance was very large according to Héctor Aquino who has participated in this event since 1984. “In any case, they spent a very cold night. It was a hard night. But the people endured it well,” he admitted.

But everything passes, and “the most difficult things also occur during the last stretch, when you are tired and hurting, but there is also the anxiety and desire to arrive. All the pain, weariness, and heat is overcome, and they arrive euphoric,” he related. 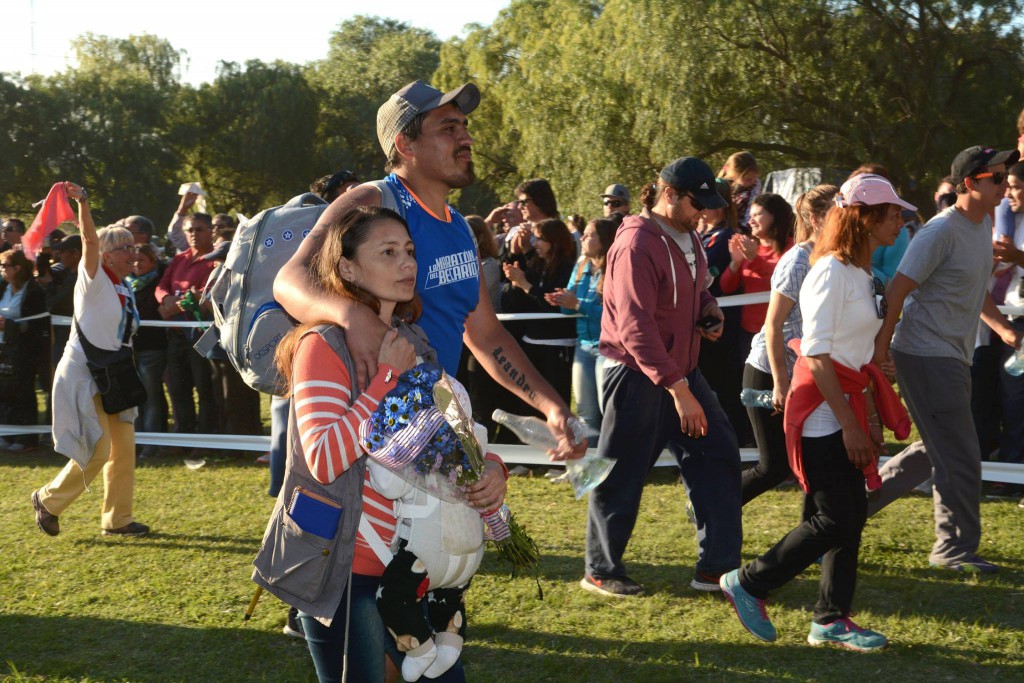 The story of Mariano and Catalina

It was the first time that Mariano joined the Villages’ Pilgrimage. He did not go alone. His daughter, Catalina, who is 10, accompanied him. They knew that it would be a great physical effort, and they prepared well. Every Sunday Mariano and Catalina would take long walks from the city’s center out close to the racecar track at Sauce Montrull.

First it was by foot; then when they were in good shape, they added a very special cart. It was a shopping cart adapted to carry Catalina.

The routine ended with sessions on a stationary bike. Thus they thought they would be well prepared.

Mariano went on pilgrimage, and he took his daughter. Since he was sure that Catalina could not endure the effort for 90 kilometers, he made an improvised cart with the help of some blacksmith friends. A shopping cart was adapted so the 10 year old could travel in it with something like a roof over it.

“I wanted to do it with my little girl who is 10, but I knew that she could not make the 90 kilometers. She tolerated the first stage, which was about 20 kilometers, and the second stage was another 10 kilometers. But then, at dawn, we alternated. We walked for a while and then I took her in the cart,” he recalled.

Mariano related that he had always wanted to join the Pilgrimage, but he couldn’t because of work, his family and commitments. He has not had an intense life within the Church: he was baptized when he was 27 years old. “Now that I have experienced this, I am amazed. It is more than what I thought. The people were in great solidarity with us, [even though] we were never from any parish group,” he recalled according to what the newspaper EL DIARIO published. 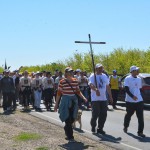 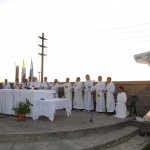 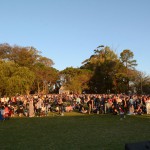 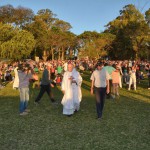 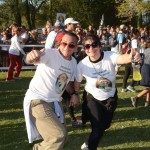 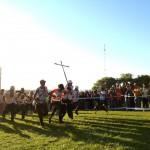 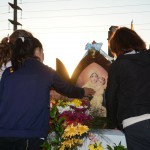 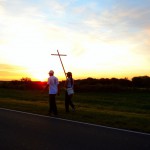 Source: APFDigital, EntreRiosAhora.com and the seat of the Diocese of Paraná.

Since it was impossible to obtain testimonies from the Paraná Schoenstatt Movement, we wrote the article with material from online newspapers and from the Archbishop of Paraná. Thank you for communicating.