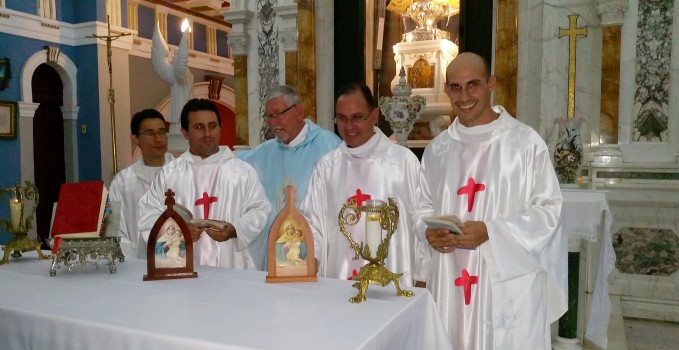 “We reap what others have sown,” Fr. Egon Zillekens said, summarizing his experiences in Cuba, at the founding of the Federation of Diocesan Priests on this island full of joy, hope, and eagerness for the Holy Father’s visit, along with the “encounter” between this country and the United States, fruit on a great part by his mediation. “To see people dressed in t-shirts and pants with the colors of the United States flag in the middle of Havana seems like something out of a movie,” Fr. Egon Zillikens commented. The photos of Cubans carrying the Pilgrim MTA in their hands, no less so…

Returning to the subject of reaping what others have sown. “The others” were Father Carlos Cox and some youths from Campanario Shrine: Misión Cuba [Mission Cuba], that began in 1999. They are three young priests: Fr. Rolando Gibert Montes de Oca Valero, Fr. José Gabriel Bastián Cadalzo, and Fr. Bladimir Navarro Lorenzo. They participated in the Schoenstatt Jubilee, and they now have met with Fr. Egon M. Zillekens and Fr. Maximiliano Bartel, from Argentina, to officially consecrate them as the first course of Federation of Diocesan Priests, thus founding the Schoenstatt Federation of Priests in Cuba. 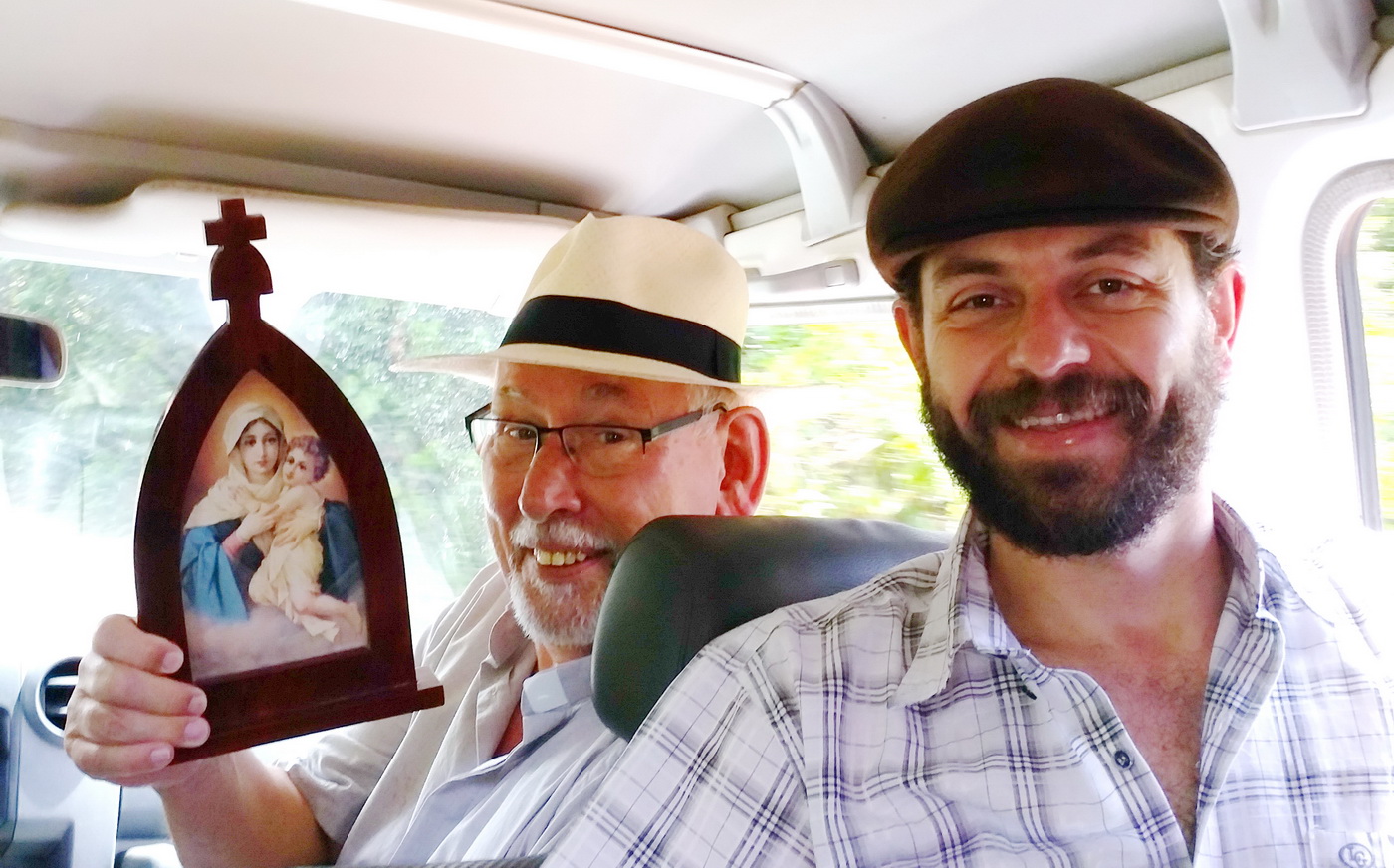 The fruits of “Mission Cuba

Matías Rodríguez of the “new” Mission Cuba relates, “Some years ago, in the Campanario University Branch, an apostolate began that would cross borders and people: Mission Cuba. At that time, three Chilean youths along with Fr. Carlos Cox traveled to Havana to study and invite many to learn about Schoenstatt, to seal the Covenant of Love and to grow in love for Mary. The mission was a success and many groups followed the first three; but then after a time, the mission ended partly due to the Cuban government’s restrictions.

Today, many years later, we see the fruits of these “short” trips, thanks to this first effort and by God’s guiding hand, three diocesan priests learned about Schoenstatt, and they began to cultivate a Marian and family style in their parishes. They are the same priests, who invited us to return to Cuba to mission, during Schoenstatt’s 100 year celebration, this time not in Havana; but in the city of Camagüey (in the center of the island, with approximately 300,000 inhabitants), and by so doing, to found a movement in parishes full of love for the Blessed Mother, promote spiritual growth and to forge leaders at the service of the country and of the Church.”

In the schoenstatt.org “archives,” there is a message that was received three years ago that reflected Schoenstatt’s road in Cuba: “For many years, we have practically been walking alone, with Raymond’s presence from Chile, that encourages us and tells us that although the road is long, the goal is secure. To know that you also think about us as we think of you and the others in the world who belong to the movement, comforts our spirits. Today in the city of Guantánamo, we are carrying out the pilgrimage of Our Lady of Charity on the eve of her feast day, and today your message will be read to the members of the family who will attend together. Receive a warm embrace and a special greeting from Cuba, the land where the Blessed Mother took her sweetest name: Our Lady of Charity…”

Seeds were sown, loyalty, trust…and the MTA has been loyal. 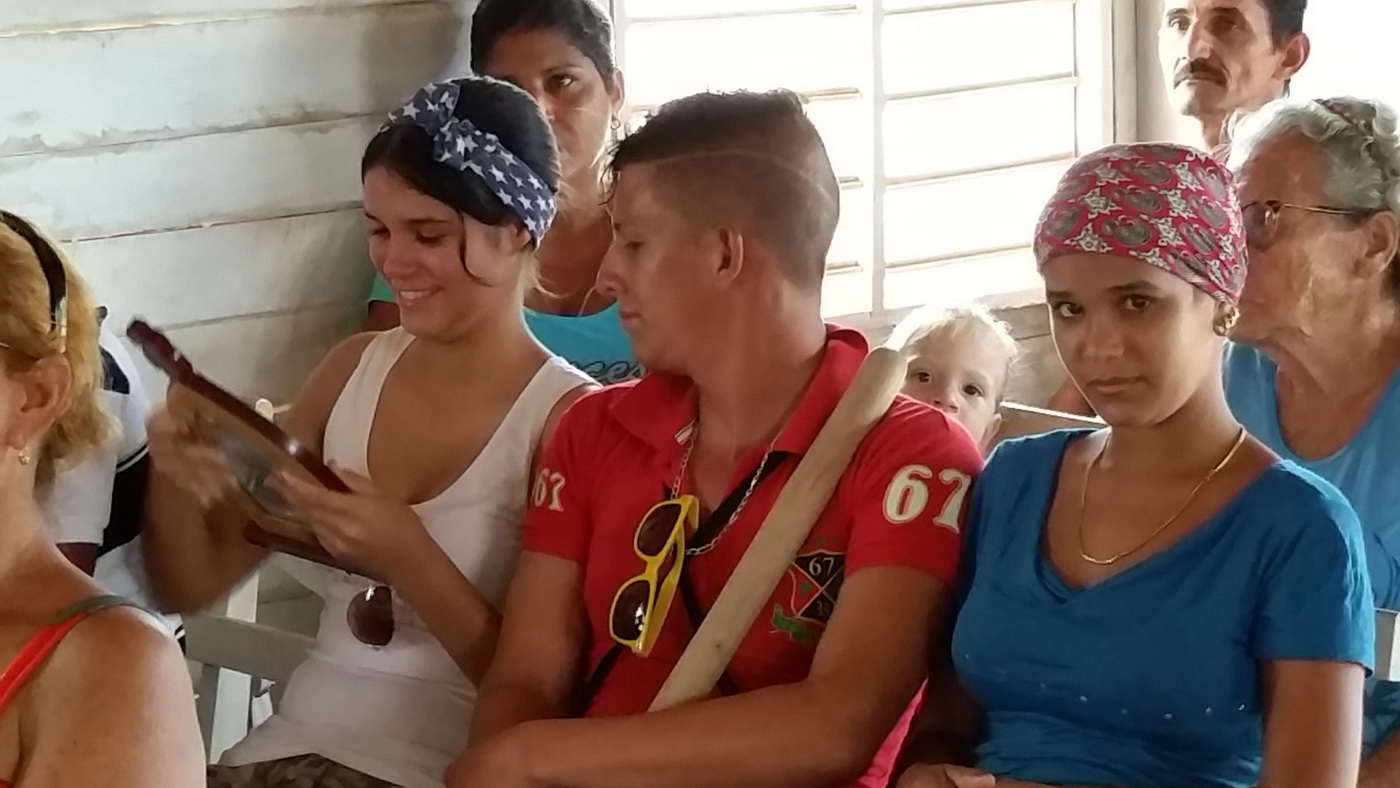 A poor Church for the poor

Fr. Egon M. Zillenkens’ trip with his Pilgrim MTA began in Camaguey, where Fr. Rolando already has Schoenstatt groups; then he took him to the Diocese of Guantánamo, where he is working presently. In both places, by simply participating in the life and the work of a committed pastor, Fr. Egon Zillenkens experienced “a poor Church, for the poor” a “Church in homes” – many times a dining or living room is used as a place to celebrate the Holy Mass: a table is the altar, a bowl is a baptismal fount – it is an emerging Church, with newly baptized people; it is a missionary Church waiting for Pope Francis’ visit. “There are poor people, there are sick people, and I go to visit them,” this is Fr. Rolando’s simple and sincere summary when he speaks about his work. And the Pilgrim MTA is present. 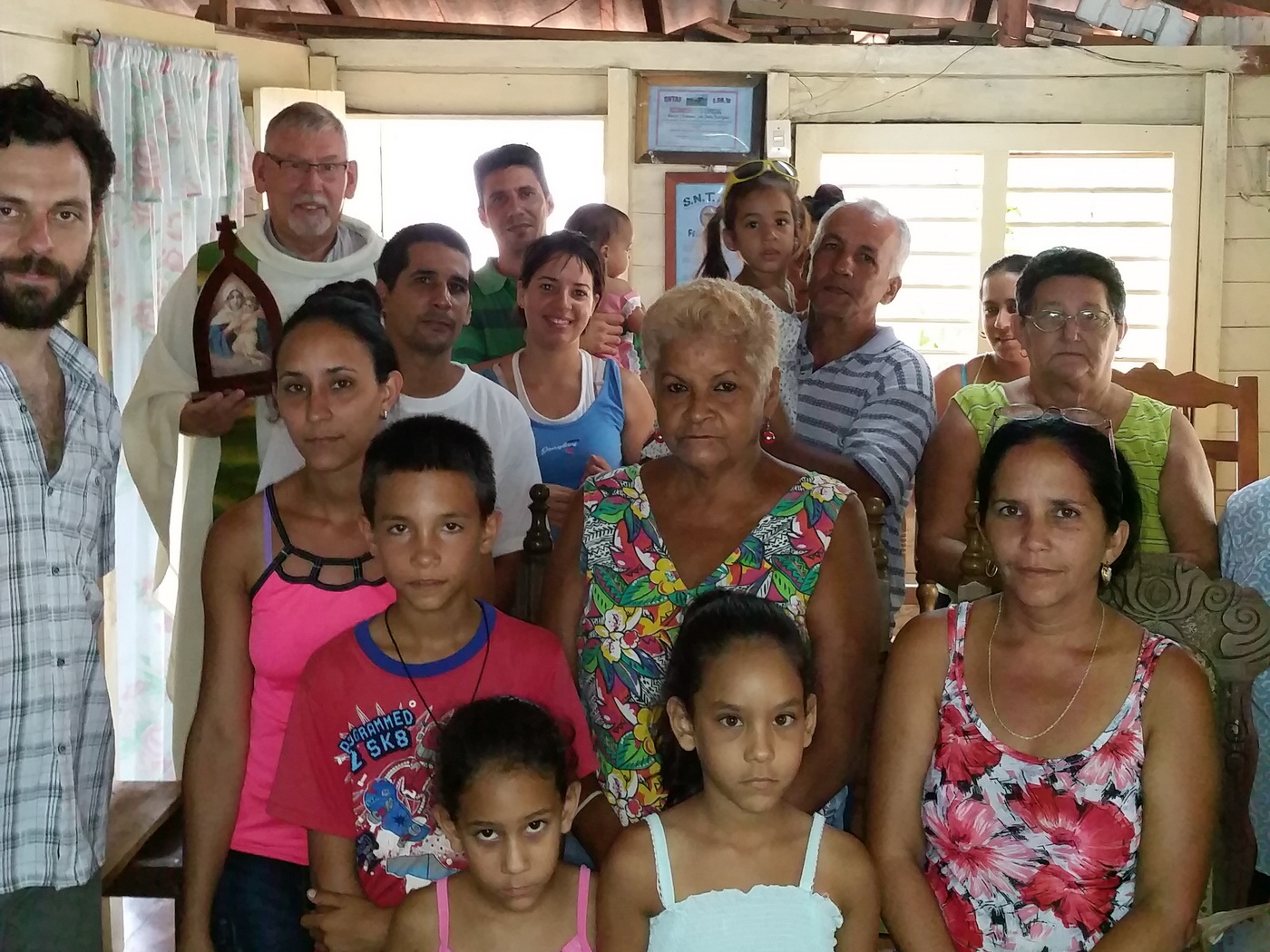 Who am I that the Mother of the Lord comes to visit me?

And Fr. Egon goes with him to visit them…and the Pilgrim MTA goes to visit them. Everywhere there is great expectation about the Holy Father’s visit. Father Egon simply says: “This is the Schoenstatt Pilgrim MTA. The Holy Father has a picture like this one on his beside table.”

Nothing more has to be explained. She conquers hearts, provoking the great question that is made so many times by sick people, the poor, prisoners…and so many others “who in our eyes or in those of the world are less pleasant,” as the Holy Father said during the audience with the Schoenstatt Fathers. Who am I, that the Mother of the Lord comes to visit me?

In the Diocese of Guantánamo, where they visited the bishop – with the Pilgrim MTA of course – they arrived at the eastern point of Cuba with the Pilgrim MTA in their hands looking toward Haiti– so close. She is also in Haiti. The bishop who opened Haiti’s Church doors to the Pilgrim MTA and to Schoenstatt, died during the devastating earthquake ten years ago. The seeds that were sown survived and they continue to grow…

Close to Guantánamo, there is an Italian priest who takes care of no less than forty-six churches and chapels. A Sister who supports him in his pastoral task cannot believe it: “Of course I know Schoenstatt’s Mother Thrice Admirable!”

The Holy Father will visit the cities of Havana, Holuín and Santiago de Cuba in the western part of the island; it is a trip that is considered historic, since the Pope acted as a discrete mediator in the process of the thawing (of relations) between of Havana and Washington. “In Santiago de Cuba, in every place, and in every corner, one feels aware of everything that is being prepared for the Pope’s visit, for the Holy Mass with the Holy Father,” Fr. Egon commented. “We took a picture – with the Pilgrim MTA of course – at the place where the Holy Father will be in just a few weeks. It was a very special moment.” 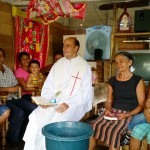 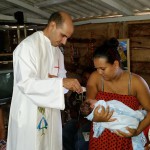 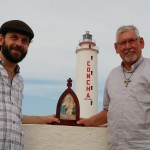 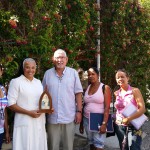 “The Federation of Diocesan Priests was founded in Santiago de Cuba at the National Shrine of Our Lady of Charity of El Cobre. She is the Patroness of the country; the Shrine is the heart of Cuba.” Everyone goes to visit her. “The devotion goes before the prayer,” Fr. Egon said. The strength of the people’s devotion is felt; this is what Aparecida speaks about so much.

Very close to the picture of Our Lady of Charity, the three Cuban priests consecrated themselves fervently and with depth; two Federation priests –one from Germany and one from Argentina and by Fr. José Luis Correa from Chile, the adviser of the priests in Latin America, accompanied them. Two Pilgrim MTAS were present, since Fr. Bladimir took the one he has had since Mission Cuba…Fr. Egon’s gift to the three young founding pioneers, “Heroes de fuego,” [“Heroes of Fire], the history of the Schoenstatt founding generation could not have been more appropriate. The Blessed Mother now has three heroes of fire in Cuba. 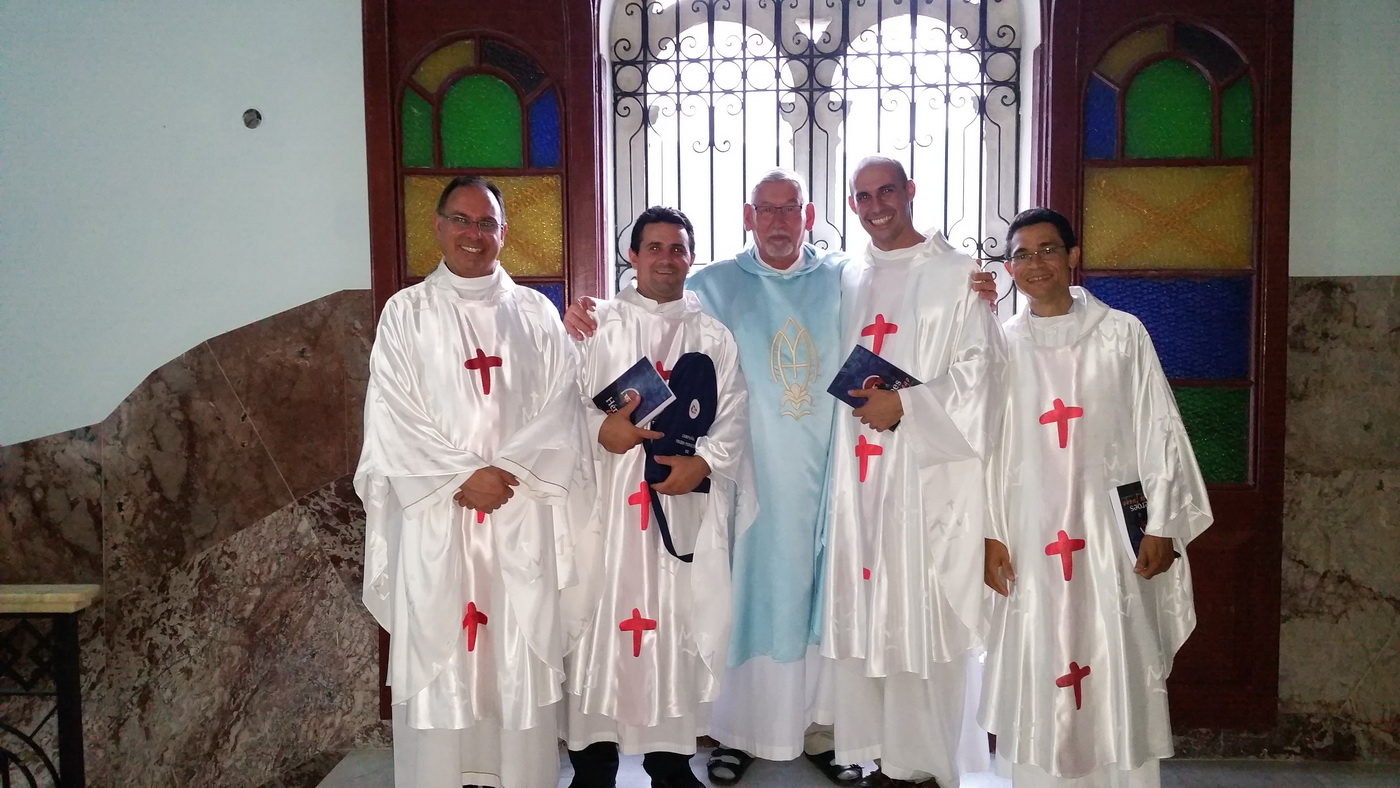 For the Movement, for the holy people of God

A couple, relatives of one of the three, accompanied us the entire time,” Fr. Egon commented. It was something providential, he said, since it was a sign that the priests are called to work for the holy people of God in Cuba and for the nascent Schoenstatt Movement.

At the end of the interview, the question “Do you need more Pilgrim MTAs?” arose spontaneously. The youths from Mission Cuba took five… Fr. Egon offered to send them more Pilgrim MTAs, some more… and Fr. José Gabriel’s reply shows that the seeds that were sown truly fell on fertile, missionary ground: “Some twenty-five to get started…” 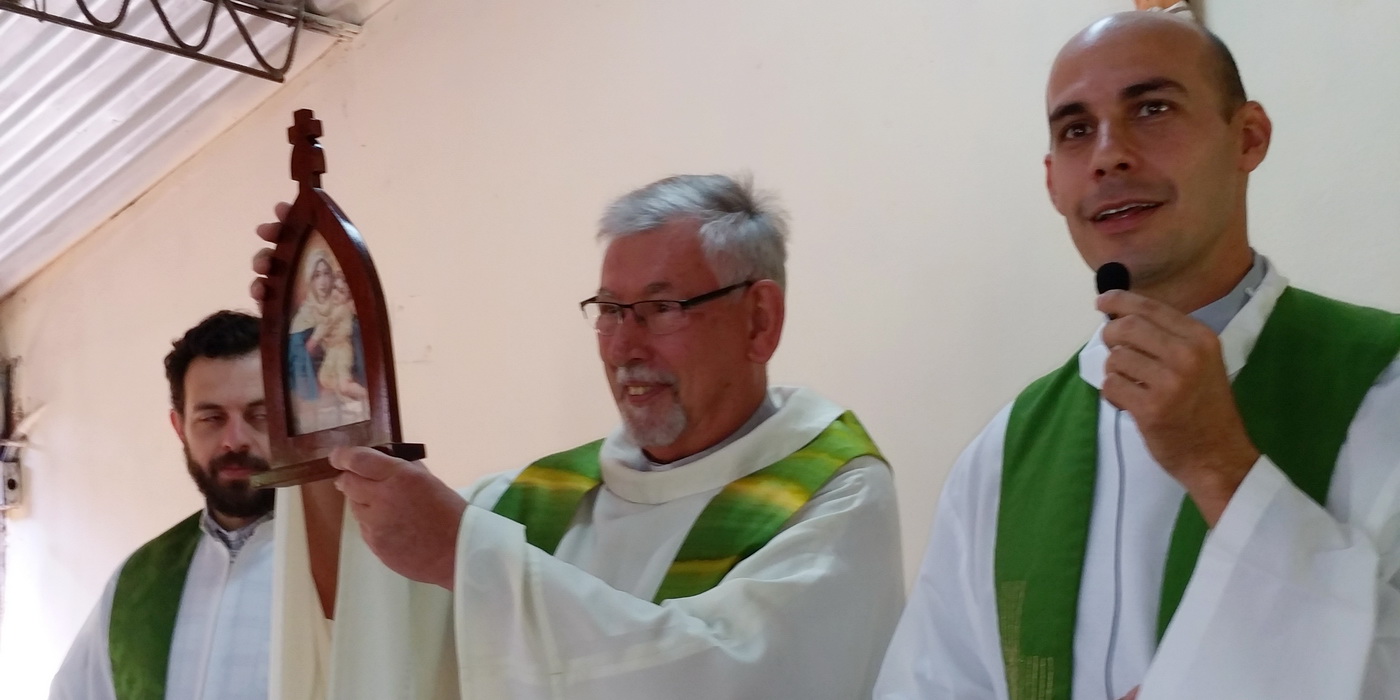 “Joseph, take the Child and his Mother”

Everything was prepared with effort and joy in Buenos Aires, Argentina. But the question remained: how will the Pilgrim MTAs reach Cuba? It is too difficult to mail them because of the situation in the country… through the nunciature? With someone who will travel, but… with whom, when?

And precisely at the moment of thinking about and praying for a solution, an another article arrives about the large Saint Joseph statue, which will be sent from Buenos Aires to Cuba, to the Cathedral of Havana…Could it be that Saint Joseph has once more heard the prayer of the angel: “Joseph, take the Child and his Mother?”

Yes, this is how it will be: the Pilgrim MTAs for Cuba will go with Saint Joseph…

She wants to arrive and she is in haste. Cuba is now hers…and she wants to be with her own.

So you can follow along, schoenstatt.org now has a correspondent: Father José Gabriel. 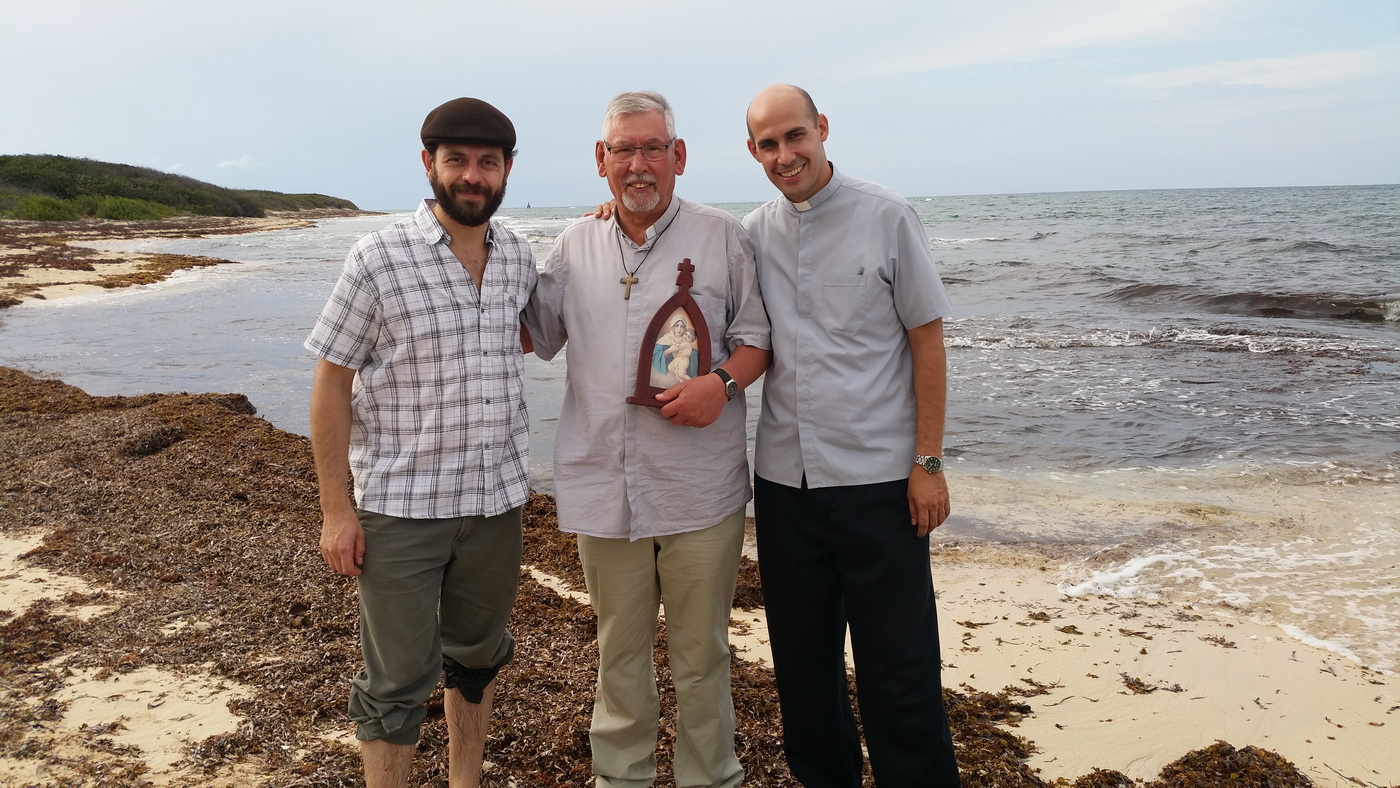 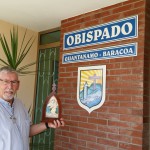 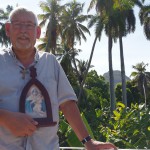 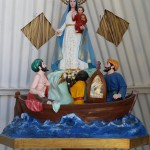 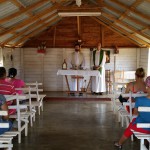 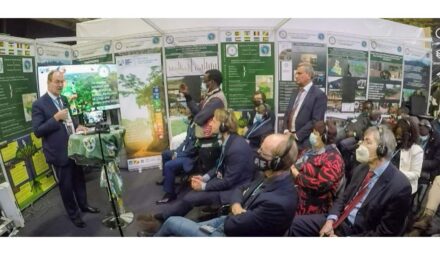