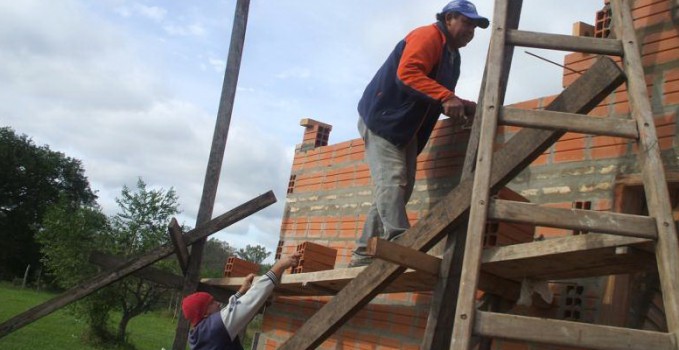 Each roof, each house, each kilometre travelled, each donation, each smile is the covenant in solidarity with our Pope Francis and with the poor… 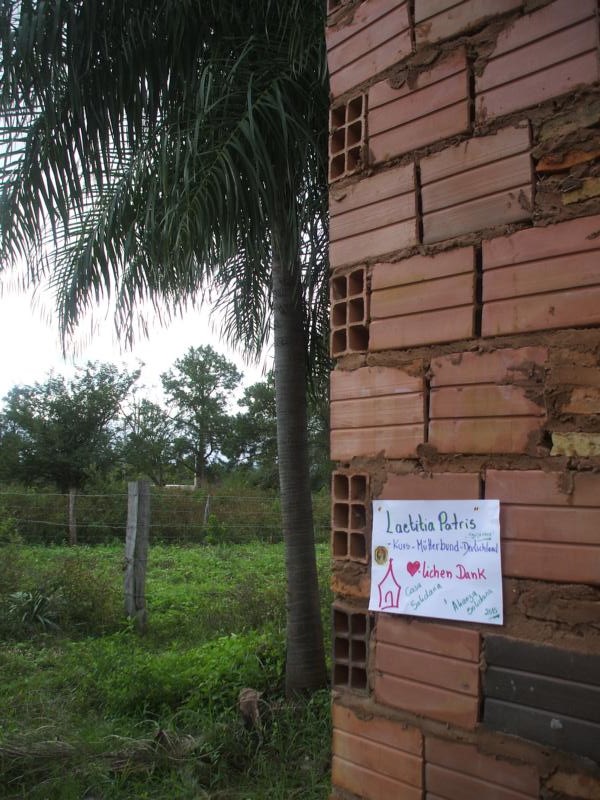 “To see your faces, your children, your elderly, and to hear about your experiences and everything you went through to be here, to have a dignified life and a roof over your heads, to endure the bad weather and the flooding of these last few weeks… All this makes me think of the little family of Bethlehem. Your struggles have not taken away your laughter, your joy and your hope. Struggles which have not lessened your sense of solidarity but if anything, have made it grow.,” Pope Francis said on 12 July to the poor of Bañado Norte, during a visit he wouldn’t have missed. It echoes what he said in Evangelii Gaudium and what he told the Schoenstatt Family at the audience on 25 October in the jubilee year:

Mary is the one who knows how to transform a stable into a home for Jesus with a few rags and a mountain of tenderness (A culture of encounter is a covenant culture, Nueva Patris, 2015, p21).

These words come to mind during this encounter between the Pope of the poor with the poor of Asunción on 12 July.

The 150 houses for Jesus also come to mind, those homes in which almost 150 families live, still in poverty, but with dignity, and all this because two years earlier the words of Pope Francis, and the desire to give him something that would endure beyond the jubilee, awakened the “100 solidarity houses” project in many of the collaborators and readers of schoenstatt.org.

Little Mariana, was finally able to give the Pope her mandarins, the ones she took to the audience in October 2014, and he came to Paraguay to fetch them.

Schoenstatt.org was able to give Francis 100 houses, then he came to bless Paraguay, the poor of Paraguay, and with them the solidarity houses and the families that live and will live in them.

He was able to see some of the houses in passing, and we know that he knows about them.

Faith draws us closer to the lives of others 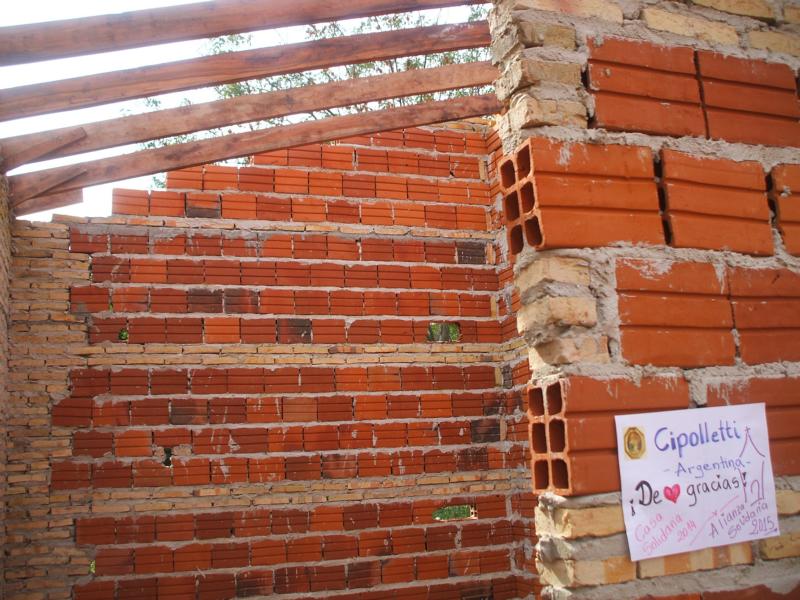 Faith draws us closer to the lives of others

“Faith brings us closer. It makes us neighbours. It makes us neighbours to others. Faith awakens our commitment to others, faith awakens our solidarity: it is a virtue, human and Christian, which you possess and which many possess, a virtue that we must learn. The birth of Jesus changes our lives. A faith which does not draw us into solidarity is a faith which is dead, it is deceitful. “No, I am a very Catholic man; I am a very Catholic woman, and I go to Mass every Sunday”. But I ask you this, “what is going on in Bañados?”. You reply, “Oh I don’t know, I know that there are people there, but I don’t know…”. No matter how many Sunday Masses, if your heart does not reach out to others, if you do not know what is happening to your people, your faith is weak, unhealthy, or dead. It is a faith without Christ; faith without solidarity is faith without Christ, it is faith without God, faith without brothers and sisters.” These were Pope Francis’ words in Bañado Norte. 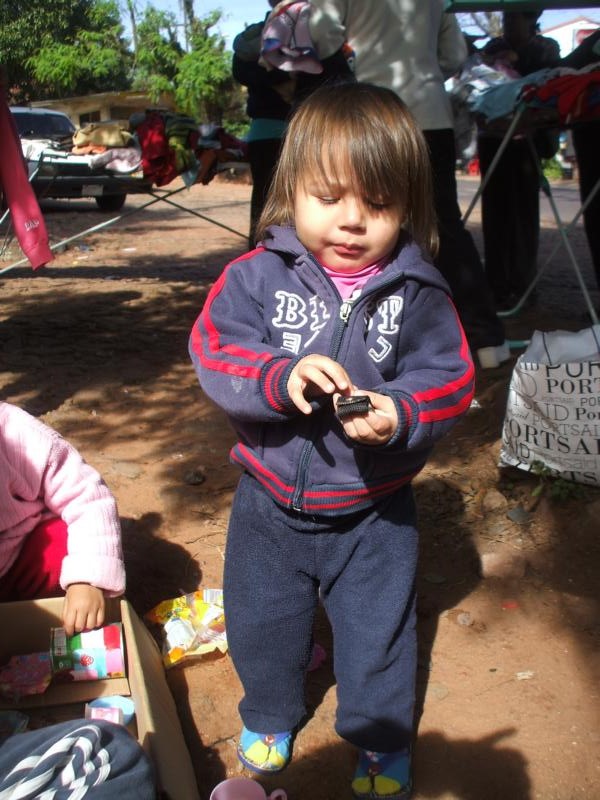 Faith draws us closer to the lives of others. Faith awakens our solidarity. In May, an article on schoenstatt.org related the stories of visits to three of the solidarity houses: the story of little Luz who needed physiotherapy to walk and use her hands, but unfortunately her mother did not have the money for little Luz to travel to the physiotherapist, a cost of about 12 euro a year. Towards the end of May, together with the arrival of donations for several houses, there was also 50 euro for Luz.

“Today, as we renew our Covenant Solidarity with Francis, the sun shone sporadically on our terracotta earth and then with ‘audacity and courage’ we were able to arrive at seven houses under construction. I have five to go!” wrote Ani. “Everything is very wet and inaccessible but the awesome little white car was able to navigate around pools and puddles and reach its destination, I know you will understand me now that you know the distances and the routes we have to take, not so? I remembered you while I was travelling around these puddles and I said to myself: If Maria were here, I would see her look of fear and surprise, but I would also see that smile of complicity between the ‘mad’ ones, as only we from the craziest team in the whole of Schoenstatt can be. And so today, in each roof, each kilometre you were present, in the earth that was redder than ever. And in each roof, each house, each kilometre travelled, in each donation, in each smile is the Covenant in Solidarity with our Pope Francis and with the poor.”

Faith without solidarity is a dead faith 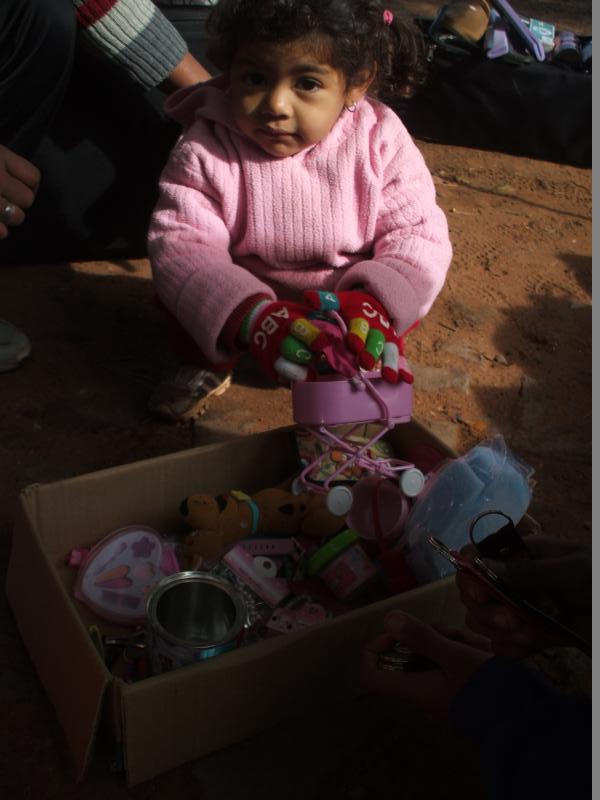 Faith without solidarity is a dead faith, said Francis.

“From what I understand, it deals practically with holiness in daily life – here in an extreme expression, in extreme conditions – and the mystery of Corpus Christi, that is to say that we are all members of the mystical body of Christ, and in the same way as the three disabled youngsters are my brothers, so too, Porfirio and his brothers are my brothers, his mother is my mother,” said Susanne T from Germany, after reading the story of Porfiro, who lives in one of the solidarity houses and cares for his three disabled brothers who are confined to their beds, and asked: “Do they have a washing machine? And if not, can I give them one?” And if not, can I give them one?” They don’t, nor do they have a fridge nor a stove to cook on. “They should get what they need now. My aunt already asked what she can do to make a donation – although she is on holiday for two weeks, but she expressed her desire to do so, and they can also count with my support, even if it is to cover just some of their needs. Grateful that the brothers are cared for, as a help, as a greeting of love, just this. I pray for the family, that God will continue to give them the strength to carry out this mission to remain faithful to their own.”

“Perhaps you can say hello from us and tell them that we are very happy with them and that we send our brotherly love and blessing.”

A faith with solidarity is a living faith, a faith with many, truly many brothers.

“When I went to see Profiro, I told him that I would pray that if God wills it, in a little while generous hearts would help them with their needs and told them that you were behind this and he remembered you clearly! Maria, words cannot express his smile and the glow in his eyes. Maria, these are saints and not wrongdoers, I believe that what we are doing, you, Fr. José Maria, many other people, and even me, does not compare with what Porfiro does for his three brothers, which is: sacrifice, renunciation, giving out of pure love! And you know, I know that it is madness, but I trust fully and I know that shortly, we will be able to ‘relieve’ this family, of course, not all at once, but we will do it.” 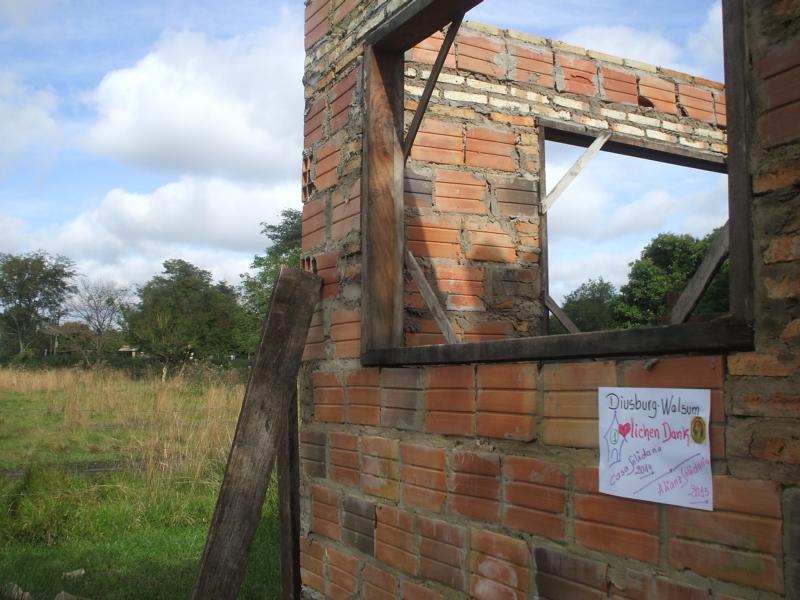 As a result of the intense rain for so long, it was only last weekend that construction began again on the last houses that had been financed – solidarity houses with the names of the parish in Duisburg-Walsum in Germany, a home shrine in Cipoletti, Argentina, the “Fatherhouse-Shrine” house, the “Laetitia Patris,” course from the Mother’s Union in Germany, a house dedicated to the Blessed Mother and another to St. Anthony, St. Michael, to angels, and of course, one that arrived as a contribution from a woman who does not belong to Schoenstatt, for a house with the name of Fr. Kentenich!

During a visit to the houses, Ani Souberlich — as she almost always does — took games for the children, clothes and something to eat. This is solidarity with a simple and personal touch.

“I’m sending photos of the houses,” writes Ani. “I also placed a poster for Italy (25 euro) so that they can see that little by little, with many little contributions, we can get enough for a roof!” 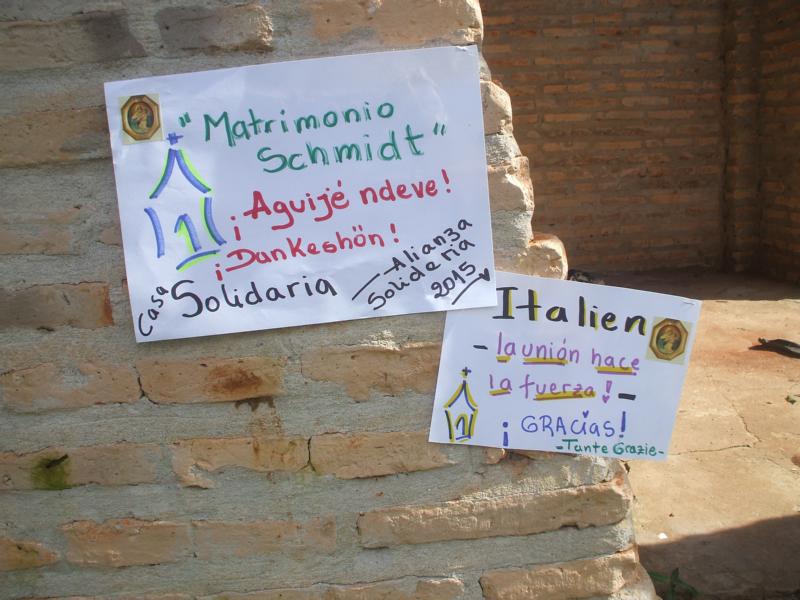 Solidarity project: 100 houses – history, list of houses and shrines, how to collaborate

TRANSFER TO THE DONATIONS ACCOUNT (SEPA) – Option for donation from Europe

This not enough? Let us find solutions: [email protected]