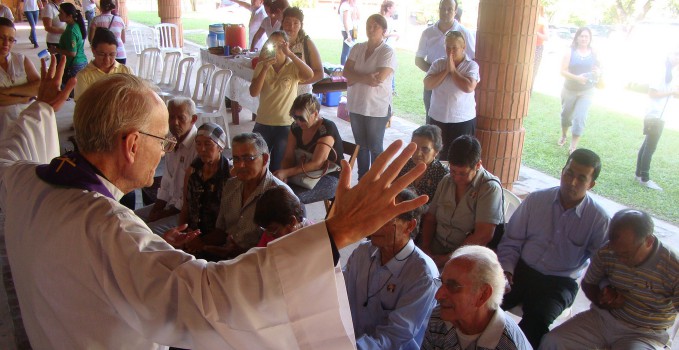 A special pastoral element of the Tuparenda Shrine: Mass for the ill and elderly

How do they do it? What is the mystery of the Shrine of Tuparenda? What does the Shrine have that makes one fall in love instantly? What phenomenon occurs that so many people feel close to God in this Shrine?

These questions emerged upon reading the testimonies, seeing the photos, and moreover from being in the midst of this mystery, in the midst of this phenomenon of the open shrine, of everyone’s Shrine, of the Shrine that steals your heart and makes you think about how to return as soon as possible…

The first and only response is “grace.” Another and yet no less important is “capital of grace,” and in this: the Shrine’s pastoral or ministry, under the direction of the rector, Father Antonio Cosp, and a large team of capable, committed and creative lay people coordinated by Diana and Alejandro Caballero. One of the concerns of the Shrine’s pastoral is simply that everyone finds his/her place, blessing, and grace in Tuparenda. That is how the Mass for the ill and elderly emerged. 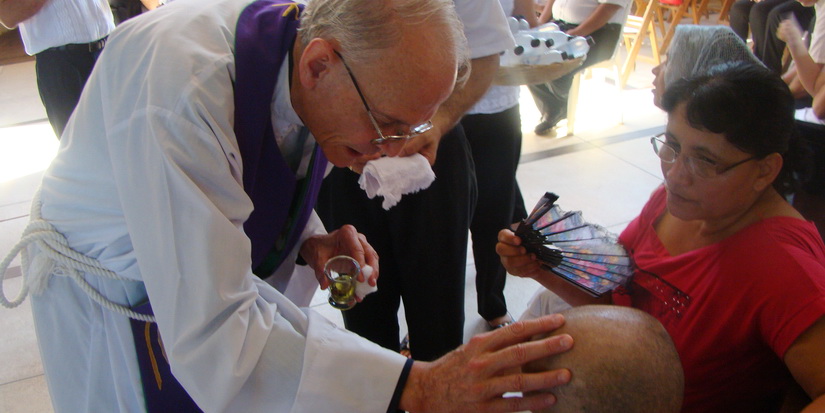 How to reach the ill and elderly?

Rita and Wilson Santacruz share: On March 15th, our third Special Mass for the ill and elderly was held in Tuparenda. It is a unique experience to be so close to the difficult situation of our brothers/sisters, who are deprived of health, as well as that of our elderly, who are becoming more like children, who are again becoming children of spirit and character waiting to return to the house of the Lord.

We had a fruitful campaign of getting the word out; the proof of this is that more than 300 sick people registered to visit, including those who signed up after Sunday Masses, those who we sought in their homes with mobile volunteers, and also those who were welcomed by the welcome team with the Boys’ and Girls’ Youth in charge. Many arrived with their respective relative that caused us to lose count of the number of ill people who were present.

We were organized in several teams to carry out the Blessed Mother’s wonderful and enriching assignment:

The strong moment of the Mass was when our Father Antonio Cosp gave the Santa Unción [Anointing of the Sick]. We saw faces filled with faith and hope, eyes that taught us that we should never lose trust in the Good God.

It is important to recall that we, along with the Areguá Cancer Hospital’s La Providencia shelter, brought fifteen sick people who received oncology treatments, who were picked up by a special minibus (a beautiful gift of the Blessed Mother) who at the end of the Mass, asked to be taken to the Shrine; many could not walk, so some were taken by the same bus, others were helped by our servers…Another very powerful moment.

We want to express gratitude to GOD and to everyone who collaborated for giving us the opportunity to serve these brothers/sisters who are going through difficult times. 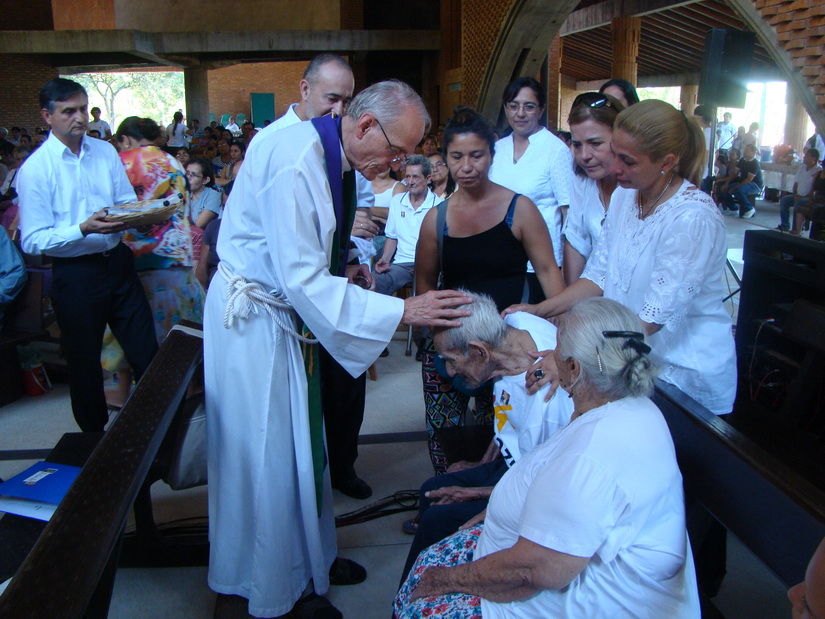 Mariela Beatriz Vignola shares her personal testimony of the Masses for the elderly and the ill.

I am speaking from my own testimony; I have participated in the Masses for the elderly and the ill that were held previously, and each one of them has stolen my heart, to see those sick children and grandparents. To see the faces of each one of them at the beginning of Mass, and the change in them after the Mass as I have told you before “Is incomparable!”

It is a very strong moment, the Holy Spirit is felt, and not only those who received the anointing go out healed, everyone who collaborates in any way feels it. The joy that everyone feels is the Triune God’s and our Mother Mary’s response of love.

I can relate two testimonies: one of the lectors: Sandra Landraida, who prepared ahead of time to be in front to read, because it was her first experience as a lector… she was so touched to see the grandparents that her voice broke. As was to be expected, her father Marco gave her a blessing before she fulfilled the task, and she said to herself: “I have to do it! Help me Blessed Mother, I cannot fail you or the grandparents.”

Also the city of Capiatá’s Coordinator, Nilsa Fernández, who participated for the first time, was crying and suddenly she said: “I do not know what is happening to me…” When she told me this, I answered that it was the manifestation of the Holy Spirit that makes you see the need there is, and He is calling you to serve and to be here for the next Mass.

The Boys’ and Girls’ Youth, who are more accustomed to this kind of apostolate because of their daring and youthfulness, felt they belonged. I personally congratulated them for the good attendance and for a task extraordinarily well fulfilled. It was made clear to the boys that they beat the girls with a ration of six to two, but not before recognizing that they were spectacular in the welcoming of the elderly from the ISMT transport so they could reach the wheelchairs.

Personally this year, I could take my father and my uncle, who is also like my father. I can tell you that I was very touched, and they left HAPPY!

My father knows of Father Kentenich through the stories that I tell him and all the way home he related this to my uncle; they did not stop commenting about how beautiful the Church was. They are devoted to the Virgin of Caacupé, and they pray the Holy Rosary every day at 6:00 p.m. in our Home Shrine; but they have not experienced what they experienced here anywhere else. How great is the “Little Virgin!”

This is a healing Mass for everyone who participated, and it is especially a very strong call to the Mercy of God. When I was invited to the Pastoral de Sanación [Healing Ministry] I did not feel worthy of belonging to this Apostolate; but the first year I participated, the Blessed Mother showed me and made me feel that I could be an instrument to serve in this task, and she confirmed it in my heart… 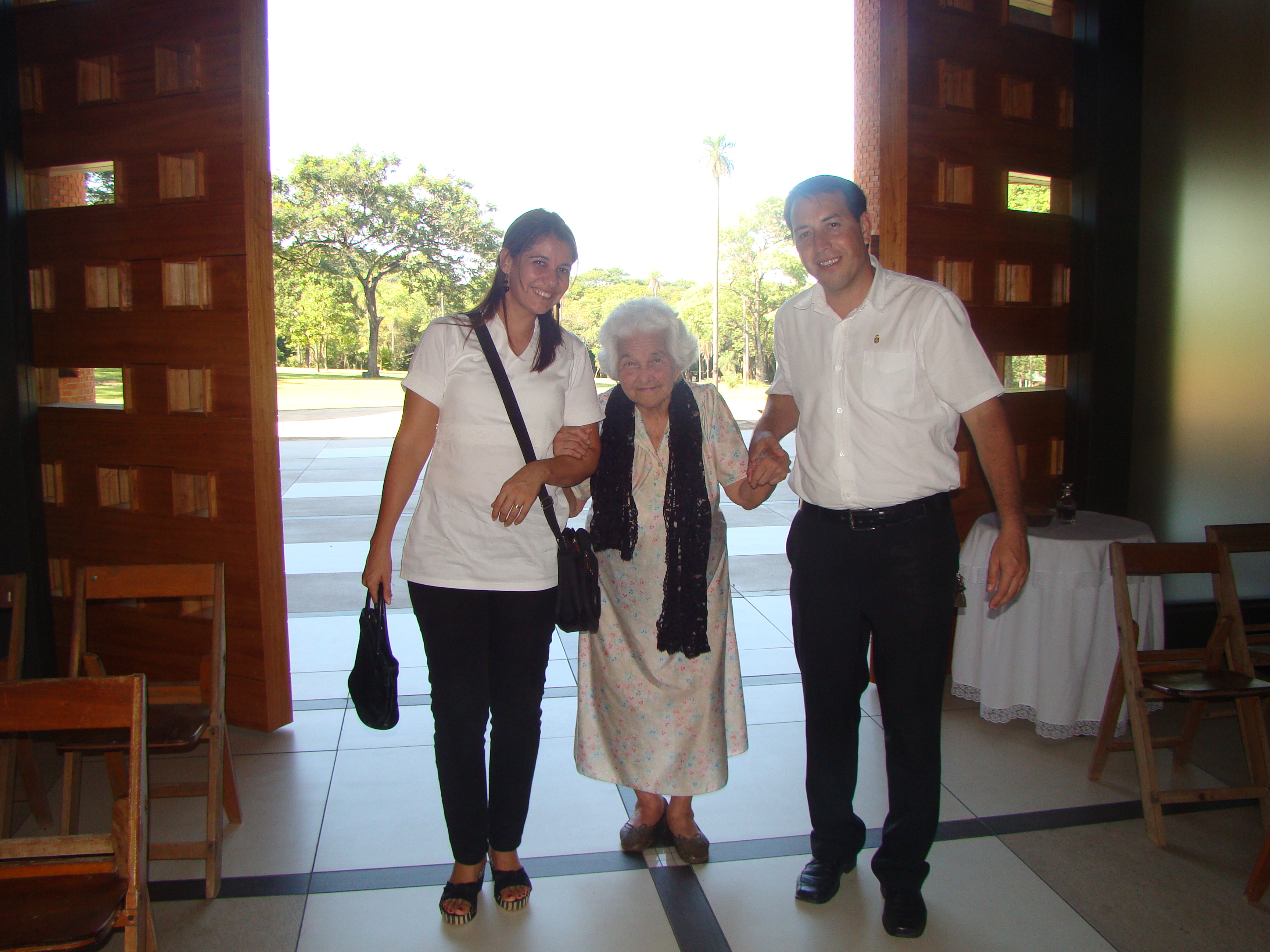 With material from Tuparenda magazine 4/2015