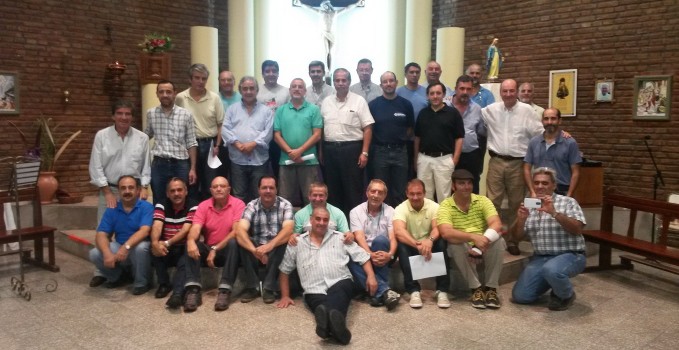 Three provinces sharing a daybreak together

“Madrugadores” (Daybreakers) from three provinces in Argentina gathered in prayer to celebrate two years of that breath of the Holy Spirit…Pope Francis’ election. A daring proposal added to the fervent desire to grow in community found an echo in many people and the result is perfect: a maximum expression of heart-filled joy. La Rioja was the nerve center of this “Tri-provincial Madrugada” as it was called, and members of the communities of Entre Rios and of Cordoba (distances of 900 and 430 Km. respectively from this city) converged there.

The idea and the first daring ones showing up 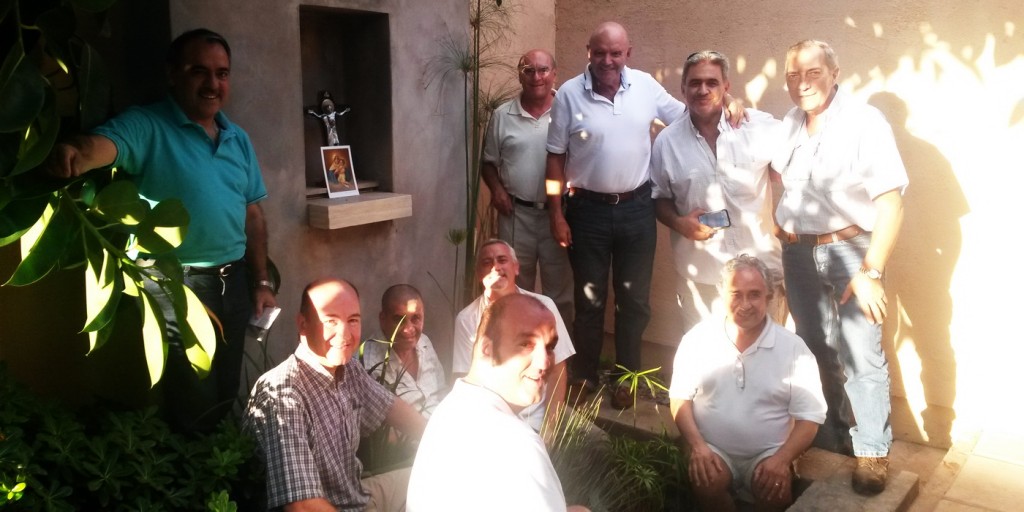 A WhatsApp group integrating with the Madrugadores from Argentina was the intention of a very ambitious idea from Entre Rios: “How beautiful it would be to greet the day in La Rioja”…La Rioja “did not allow the idea to rest,” and they hurriedly responded with the “ADSUM,” a constant within the Madrugadores: Córdoba quickly joined the idea (they had already visited in 2014) and they set a date: the second anniversary of Francis’ papacy.

What seemed to be a crazy idea began to take shape and the communications among the three communities practically “flew” daily. The Riojanos informed those coming that they would welcome the pilgrims into their homes as a way of getting to know them better. The pilgrims were happy with the idea, and they began to prepare themselves. Some had to “abandon” the project because of work-related issues and others decided to do it but…. “SHE did not allow them…!”

Thus the day arrived to realize the desire that someone from Entre Rios had anticipated the month before, the reality that everyone’s heart was in a state of “we are on the road;” it took shape and together Entre Rios and Córdoba again said… “We are on the road!”

A gas station was the original “meeting place” of eight of the pilgrims (who would become ten), and from there, they departed to the “distribution point.” The Riojanos had impeccable organization, (They even had an “Event Director”!) in addition to having hearts known for their generosity and affection. That “distribution point” was no more and no less than the future wayside shrine at the home of one of the Madrugadores… It was an advance of the “apostolic sending forth” of the Madrugadores!

A dinner with more than thirty members was the framework of integration in which conversations led to becoming better acquainted and yet to come to the same conclusion… They are personalities who can differ in some things, but their hearts converge towards the Good God the Father through a Faith that is nourished in community prayer!

The same thing happened when two Cordobeses, who had decided not to participate in the “Interprovincial Madrugadores”, did not count on HER wanting them to attend… They were there! One of them related how he had found a solution to his inconvenience and this affected the other one…They got ON THE ROAD by Mary’s hand, and their arrival in La Rioja caused immense joy to everyone and fundamentally in the Cordobeses!

A round of testimonies that extended the dinner past 1:30 a.m. united their members even more and…they had to go to bed since the appointment for their daybreak prayer gathering was 7:00 a.m.!

Parish of the Most Blessed Sacrament

Their pastor, the beloved Father Federico, is a member of the community of Madrugadores from La Rioja, and with enormous generosity, he opened the doors of the parish for this gathering. The Madrugadores were happy!   In this meeting, they shared a script with songs carried out by the three communities along with prayer meditations and those expressed from the heart; the participants rated it as UNFORGETTABLE. The first expressions from their hearts were expressions of gratitude for Pope Francis, for the bishops from the three communities and for the priests, many others were added and there were also personal and entrusted petitions. A truly prayerful atmosphere was enjoyed.

In the encounter that followed, Father Federico joyfully emphasized this time of masculine prayer, he invited them to continue this current with renewed vigor and to work for the spread of the Church wherever they are. “Thus we lived the three graces of the Schoenstatt shrines (being at Home, Transformation, and Apostolic Zeal) at this unforgettable Riojana daybreak,” one of the members related with tears in his eyes. 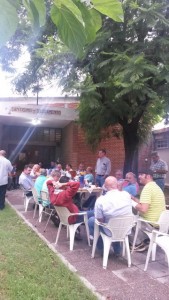 They set an objective: to have another daybreak prayer experience together in 2016, naturally inviting other communities and with a special addition…

That conclusion, which is a challenge, consists in adding at least one community of Madrugadores in each one of the three provinces. Although it was clearly expressed that they do intend to add to “the number” of Madrugadores, more importantly is “allowing other men to enjoy what they enjoy: To walk in prayer and by the hand of Mary, close to Jesus Christ…Towards God the Father!”

The least expected moment arrived and the Madrugadores returned to their homes “leaving a bit of their hearts” in La Rioja…Until 2016!