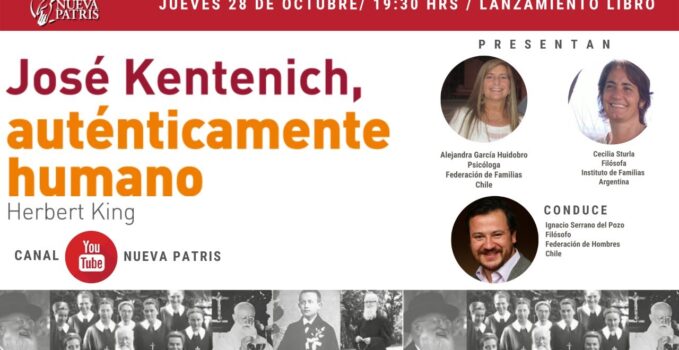 On Thursday, October 28, the presentation of the book “José Kentenich: auténticamente humano” (Joseph Kentenich: authentically human), a work written by the priest Heribert King about the inner struggles that the founder of Schoenstatt suffered during his years as a Pallottine seminarian, took place. This recent publication of Editorial Nueva Patris was presented by the Argentinean philosopher Cecilia Sturla and the Chilean psychologist Alejandra García-Huidobro. —

It is a brief text of 110 pages, translation of Der Mensch Joseph Kentenich, published by Patris Verlag in 1996. Unlike other works of Fr. Heriberto King dedicated to present Kentenich’s thought in texts, this work focuses on the inner process that the young Kentenich lived before his priestly ordination, understood as a crisis of individualism, skepticism, rationalism and “detachment from the earthly”. In the second part of the book, he also explains how he overcame this crisis thanks to his encounter with the Virgin Mary and the development of a filial surrender. It was this contact with a concrete person that awakened in the Founding Father his capacity to give and receive love.

Cecilia Sturla focused her presentation on the rigorous environment of the European seminaries at the beginning of the 20th century, whose formation was centered on Kantian duty and rationalist theology, with a high level of distrust towards the world of affection and interpersonal relationships, which were seen as impediments to religious life.

On her side, Alejandra García-Huidobro looked at the same crisis from the perspective of developmental psychology, since it can only be understood if attention is paid to the life of little José. The abandonment of his mother in an orphanage and the non-recognition of his biological father are key factors to understand where much of his early inner imbalance revolved.

Finally, both presenters dedicated their final reflection to analyze how this book helps us to unveil the authentic Kentenich, whose message of sanctity passes precisely through the recognition of human fragility and openness to the bonds of dependence.

Source: Revista Vínculo. With permission of the publishers and the author.

To buy in Spanish