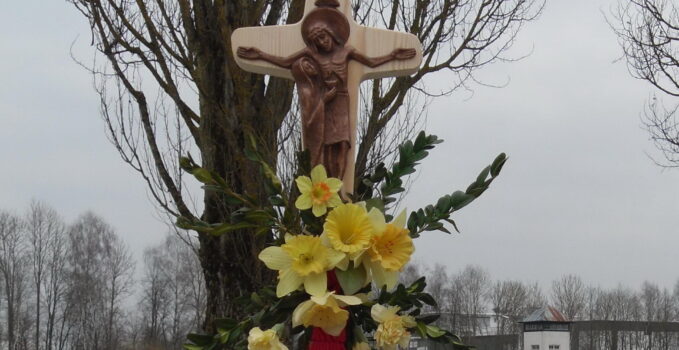 Posted On 2020-04-19 In Covenant Solidarity in Times of Coronavirus, Kentenich

So many things that had been planned and prepared with love and dedication are cancelled during these weeks. Sporting events, concerts, congresses, fairs, anniversaries, travel. Processions and stations of the cross, dozens of missions for hundreds of youth, 500 years of the first Holy Mass in Argentina. And also the celebration of 75 years of the release of Father Kentenich from the Dachau concentration camp. We stay at home because we take care of each other, and relieve doctors, nurses, and all those who are now working in emergency status.—

“We, the Schoenstatt Family of Father Kentenich in Dachau, wanted to ‘pick up’ Father Kentenich on April 6th and then accompany him to Schoenbrunn. There in the convent, near Dachau, he spent the first night in freedom and the next day he celebrated in the convent church,” said Sister M. Elinor Grimm. The Dachau concentration camp memorial site is closed. Also the big liberation ceremony on May 3, to which about 80 survivors had promised to come, had to be cancelled due to the pandemic.

Somehow the situation fits into this strange year of 2020: Father Kentenich who survived more than three years of prison and concentration camp, who had to renounce Mass and contacts, and who was surrounded by illness and death, would have liked to leave Dachau for Schoenstatt on April 6th. And yet it would still take until May 20th, Pentecost, for him to be able to enter the Original Shrine again and greet people with whom he knew he was deeply attached. We now wait like he did and with him.

Reliving the events from 75 years ago

Sister M. Elinor Grimm invites you to relive the time 75 years ago in person. She summarizes the stations of this long waiting period:

On Easter Monday, April 2, 1945, Father Kentenich held the attunement for the renewal of the spirit for Fr. Fischer’s group.  He assumed that it would probably be the last one in the camp, because the Allies were coming closer and closer. One hoped for a quick end to the terrible conditions. In the overcrowded concentration camp, typhus had broken out at the end of 1944. Many died of it.

“Procedamus in Nomine Domini et Dominae” (Let us go in the name of the Lord and Lady) was the slogan that Father Kentenich gave to Father Fischer’s Schoenstatt group.

On April 5th, Chaplain Heinz Dresbach was let go and the following day Father Kentenich was as well. Heinrich Himmler, to whom the concentration camps were subordinate, had begun a discharge campaign among the clergy in the spring of 1945. It went according to the alphabet. But soon the discharges were stopped again, and one had to fear that the whole camp would be liquidated… Father Fischer was not among the lucky ones who were let go in this action.  He should even have gone on the death march on April 26, but he was able to hide. This is how he experienced the liberation by American troops on April 29, 1945. The whole camp was quarantined due to the typhus epidemic. Father Fischer could only return at the end of May to Limburg and then to his home village Pfaffendorf.

Father Kentenich was discharged on April 6th and went to Schönbrunn.  Chaplain Heinz Dresbach arrived there in the evening and took him to Freising on April 7th. There, with the Pallottines, they stayed for about a week until a meeting with Cardinal Faulhaber was possible. Several encounters with the Schoenstatt Youth and Women’s League also took place. They then continued under difficult conditions – it was still war – until they reached Ennabeuren. There, in the Swabian Alb, Father Kentenich remained for almost four weeks. He wanted to make the long journey to Schoenstatt with a carriage and steppe horses. But things turned out differently. Father Menningen picked him up with his brother, who had a car. They arrived in Schoenstatt on May 20th – Pentecost at the time. 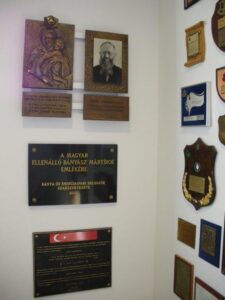 Father Kentenich then soon made the plan to travel abroad, to give thanks for all the faithfulness. Many were cut off by the war and waited for news. His gaze went forward. Already in Freising he said in his first talk for the Schoenstatters – Women’s League and Girls’ Youth:

We do not want to look back into the horror. Our gaze goes forward into the future…Schoenstatt is a Movement, not an association with fixed forms. That is why now, as the world is bleeding from a thousand wounds, we must help. We must be Marys who see all the need with Mary’s eyes, who have Mary’s hands to soothe everywhere. The feet must walk in the ways of Mary, and the heart has Mary’s petition: Lord, they have no more wine! But we do not only want to alleviate the external need. Above all we must reawaken the buried faith and trust in God in the hearts of men. Let us pray a lot, sacrifice a lot, love a lot.

In Freising Father Kentenich also had his picture taken. He needed a passport photo. So the well-known photo with his still bald head and without a beard was taken.

“In the hell of Dachau, fellow inmates were allowed to experience a piece of heaven close to him! This is testified above all by Heinz Dresbach, one of the three writers for Father Kentenich in the concentration camp. Father Kentenich lived from the reality of the supernatural, from the Covenant of Love with Mary. That was reality for him. Thus, the seal over these years of Schoenstatt’s history is: ‘Triumph of Covenant Loyalty’.  This may be an incentive and confidence for us even in the present crisis”, Sister M. Elinor said.

In the great need in Dachau, Father Kentenich chose the Blessed Mother as Queen of the camp, as Bread and Home Mother.

“Let yourself be named queen of the world, let hot love blaze from us to you,

ignite the whole world to your service, that all nations may find their way home safely.

Your sacred heart is the world’s haven of peace,