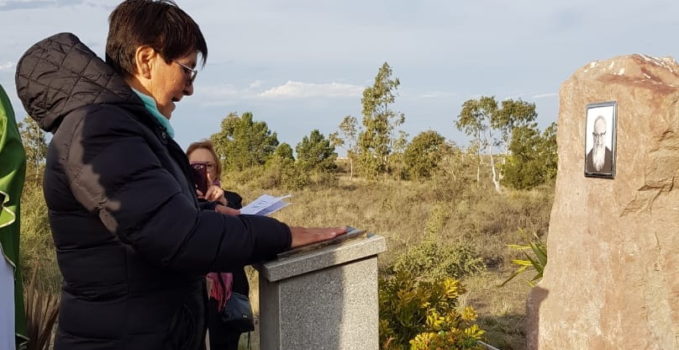 If Father is the Founder, then I’m an Heir

On September 15th on the occasion of Father Kentenich’s Year, at the Land of the Promise Shrine in Rawson, Argentina, a very moving Mass took place on Saturday afternoon. Fr. Juan Nota, pastor of Rawson, celebrated. In his homily, he referred to the Founder by linking the Founder’s charism to the day’s readings. —

At the end of Mass, the priest blessed and gave out images of the Rosary Campaign’s Pilgrim Mother to new missionaries. Afterwards, Fr. Nota and those of us present went to the Father Kentenich memorial built in front of the Shrine, where Covenants with Father Kentenich took place. Members of the Shrine’s pastoral team took care of the preparation for the sealing of these Covenants with Father Kentenich. In addition to the promise, each one of the new covenant partners confirmed their commitment by placing their hand in “Father’s handprint” located at the memorial. With their hand in Father’s, they prayed, “Father, we are here, we go with you.” It was a very moving experience. A meeting and sharing some cake with all who accompanied us concluded the commemoration of the Founder’s definite encounter with God. 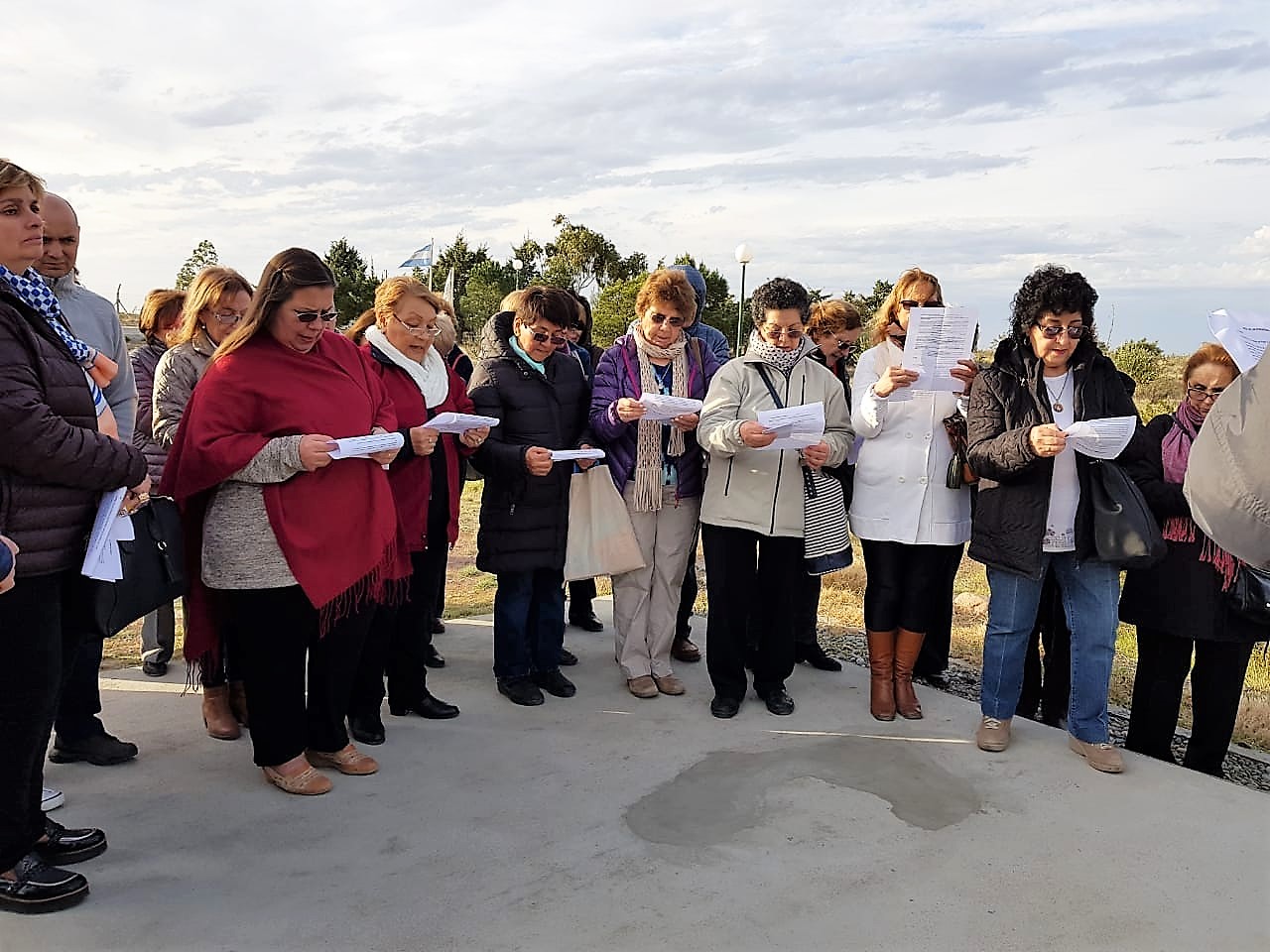 An encounter with the Father and Founder

In preparation for the celebration of the 50th anniversary of Father Kentenich’s Home-going, José Eduardo and Inés Epele – who shortly afterwards left for Europe to participate in the September 15th celebration in Schoenstatt, and then in the 100th anniversary celebration of the Joseph Engling’s death in France – offered a talk on 8 September under the latticework of the Shrine. With projections, songs and reflections of the Founder, talk was entitled: “An encounter with the Father and Founder,” which Inés described “as an encounter of brothers and sisters who love a father.”

Inés and José Epele provided an audio of great value from Sr. Elizabeth Parodi from the Leaders’ Conference that refers to the charism highlighting his paternity as God’s transparency, his character as an instrument of the Blessed Mother and his educational character…his condition of always being at the service of others and seeing what is best in others.

They also showed a video from Fr. Alberto Eronti pointing out what Father Kentenich had told them “My mission is your mission,” alluding to a legacy of which we are bearers.

“It is apparent in this Year of the Father” –José Eduardo Epele began – “that a abundant life has awakened as well as a great deal of interest in the Founder and a desire to know him and to recover unknown aspects of his history.” He referred to this as “a very good opportunity to deepen in his charism and in his mission.” “When we refer to his charism” – he continued– “we can’t help thinking about his character as a prophet. Moreover one can’t think about Father Kentenich as only a charism, but that as Founder, he felt he was the bearer of a divine mission for the world and for the times. Father Kentenich is not present on earth today. He has his communicators—we are his communicators. He himself thought “for the following centuries.” 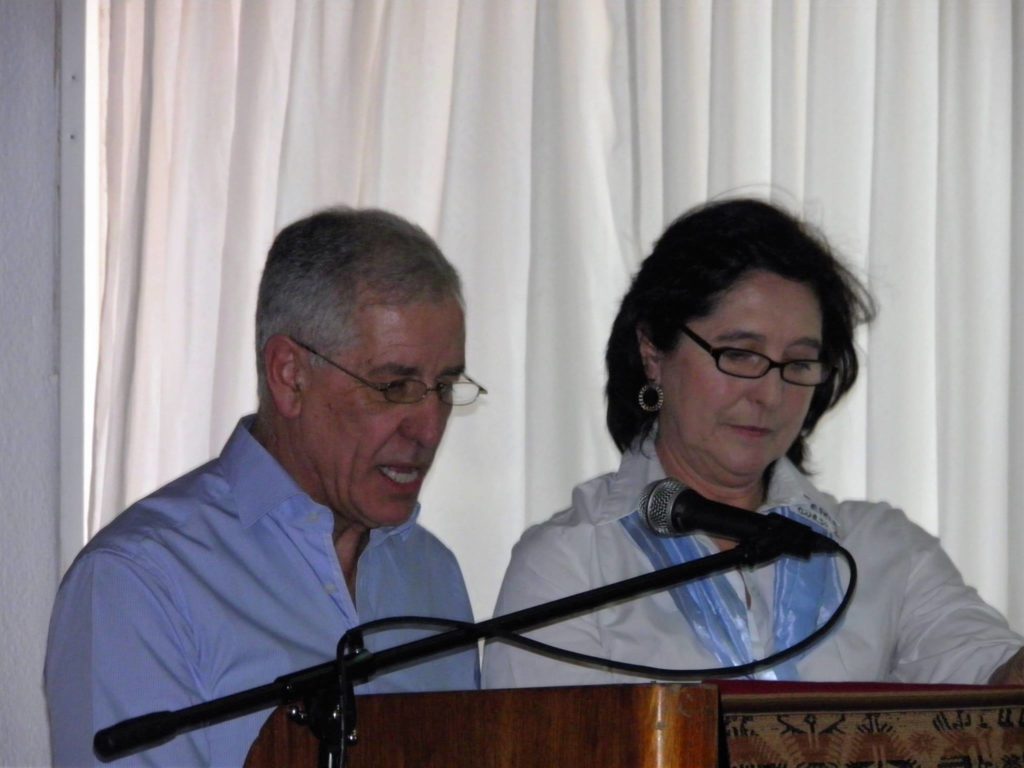 To found anew there is neither age nor state of being

Father – said – he felt he had something to proclaim. “The new man in the new community.” He deeply experienced the sickness of the times, he perceived the solution, and manifested it with great audacity. He added that in 1919, he founded the Schoenstatt Movement but the youths structured the base for the Movement. “In the shadow of this Shrine, the destinies of the Church and World will be co-decided.” Father would do nothing alone, but with those who were with him. José Eduardo highlights that Father is a prophet, not a visionary. He has the dimension of a prophet like all those in the Bible. They see the present and the current that mobilizes for good or for ill. He goes out to proclaim the message in the talk of May 31st: “Whoever has a mission must fulfill it.” He knows of the risks, but now it is up to us as continuers (followers), bearers of that message. “To perceive the signs of the times” –said José Eduardo – “is a grace, but one must learn to recognize ‘the healthy spirit of the time.’ ” Like the wheat, they grow together. He commented that Fr. Esteban Uriburu would say that “to have mission awareness is essential, it awakens strengths and powers concentrated in each person.” And he continued by saying: “In times where human beings turn to pills in order to face daily life, Father Kentenich would say that he would take only one pill: the Covenant of Love.” “Father” – he explained – “would lean on those who followed him. In 1912, he invited the youths in a beautiful proclamation: “You will make my intention your own.” It could not be understood without the Schoenstatt Family alongside. He was not an isolated founder. He founded a Family for which he gave himself completely and he gave his life. What hurt him most was the pain he could cause his Family— a true symbiosis between a father and children.” José Eduardo continued saying that: “If Father is Founder, then I am an heir. We are children: I give you a hand because the two of us together can reach God; the Holy Spirit awakens charisms and gives us messages. There are many charisms in the Church, but through secondary causes God is represented to us. The Blessed Mother is the Co-Redemptrix. Father found harmony by taking refuge in the Blessed Mother. He also said the Founder cannot be understood without the Shrine. We have an enormous gift to give. We must be very attached to him. Come to the place of Graces.” “When you look for me, you will find me in the Shrine.” José Eduardo expressed: “The future passes through us, his family. To found again, there is no age nor state of being.” During the talk, Inés contributed and commented on quotes of great value from Father Kentenich.

An enriching and moving talk, with inspiring songs.

The story of my attachment to the Father and Founder is not easy to summarize. It dates back to the first contact with the Schoenstatt Movement. After more than a year after having arrived in Rawson, Jaime Iralde invited my husband and I to a gathering of couples in a Movement with a strange name that I had never heard of in the parish. We went joyfully: we only knew the Iralde couple that received us along with two other couples. The welcome, simple, warm and filled with joy, created a cordial atmosphere where they spoke of the spirit of family, the new man, and something else which awakened the curiosity to ask: Who invented this? “Father Kentenich,” they answered and gave us very little information. I am convinced that was my first encounter with Father through those instruments that placed him on the scene – a gift from God – so that from then on I would seek to know his life, his thinking, his mission and the entire world of Schoenstatt. I remember a fundamental moment: on one of the last visits of Fr. Esteban, I confided that our Father and Founder was the father I had chosen, that embraced and contained my smallness and he, with much enthusiasm, encouraged me to seal my Covenant with Father Kentenich of which little was spoken about at that time. In solitude, with Cristina Farías, we sealed our Covenant with Father Kentenich. Since then, it is the paternal presence that guides me and countless are his manifestations in the history we have traveled together.

Our Founder is, before anything else, father, with all the virtues that entails. It is apparent in his look through the photos we have. That look is tender, generous, protective, and we know that from his dwelling, he guides us along with our Blessed Mother.

I understood through the reading of his life-story and his messages that we should trust in God the Father, in Divine Providence; that we have to increase the “Treasury of Grace” and offer it to our Mother. From the Shrine, she will give us the three fundamental graces: transformation to be better Christians, the growth in her love, and the sending forth, to transmit to our brothers and sisters the pleasure of living the Schoenstatt charism.

I also learned from our Father and Founder the importance of self-education; to feel the graces received from the Shrine offered to me by the Blessed Mother and her Son, Jesus, and the constant learning from Father Kentenich in his surrender and dedication. What I experience and feel is very rewarding. I confess that when I sealed my Covenant of Love with Mary in 1987, I found there, in Patagonia, the essence of the “Promised Land:” a Family in the Schoenstatt Movement and in the Blessed Mother, the Mother who caresses our souls and fills us with joy. And it is Father Kentenich and his teachings, the father rector, who guides our steps towards God the Father.