“Here, in this corner of the world, the beauty of this sea and the beauty of these people, of these hills, of these children, has overwhelmed me.  Here is the force of life I have been looking for, simple and profound faith, the fire of passionate love without limits, a strong and sacrificial surrender, which totally consumes itself for the Family and for the mission.” (JK)

In this time of grace of celebrating the 70th anniversary of the founding of the Apostolic Schoenstatt Movement in Chile, we want, as a family from the Fifth Region (Valparaíso), to be enchanted anew and bring to life to parts of our history marked by the profound, prophetic footprint that Father Kentenich left us.  Experiences that were marked with fire in the hearts of so many who made it possible, that today in the Shrine, we can celebrate the Blessed Mother’s loyalty and gratefully renew our mission and task as founders.

Let’s recall a bit of history

In 1940 Mrs. Rosita B. de Durney organized a group of mothers and Catholic Action diocesan leaders, who in their desire for greater depth in better serving the Church requested “formation classes” from Miss Benedicta Daiber who faithfully conveyed the Schoenstatt’s message.

They were always aware of the great mission they had received and of the weakness of the instruments, but along with those, love for the MTA grew in them.

And so it was that this group of mothers and founders sealed their Covenant of Love with the Blessed Mother on 15 May 1942.  In Chile, Schoenstatt blossomed as a child of the Father from January 20th and thus on June 23, 1942, in a Eucharistic celebration, the ladies offered themselves for Father who was a prisoner in Dachau.

Later on, Father notes with admiration that God in his Providence had wanted to interweave his life with that of this group chosen by HIM, in this corner of the world, and that on that same day, June 23rd in which the founders offered themselves for Father, he, in Dachau, was Providentially liberated from going to his death in the gas chamber.  This act was received by the group as a great gift from God that made a profound and heroic love for Father grow in them.

On June 27, 1947, a silent and unforeseen event occurred from which a blessed history has been derived, which we have all experienced and which many people accepted not only in Chile but also in many other countries.  The first, the co-founders were the seed that the Father accepted and upon falling on that land, was watered with great self-denial, loyalty, spirit of sacrifice and apostolic awareness for bringing forth and nurturing the Schoenstatt Work in our country that it produced the expected fruitfulness.

The act is confirmed in the Chilean Apostolic Movement’s Founding Document, a sealed document bearing Father’s signature (placed in the Cenacle Shrine of Foundation, Agua Santa, Viña del Mar) and that Father declared as founding members. 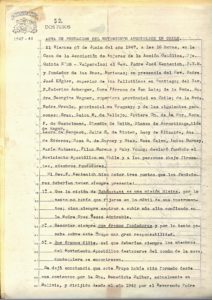 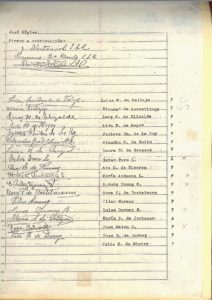 The Mothers’ Branch of Viña del Mar has especially lived (experienced) Father Kentenich’s route for many years now.  This is so engrained that for the 50th Jubilee – thinking what the gift for Father would be from the Mothers’ Branch – a group of mothers decided, embracing the inspiration of one of them and meditating on it in the Shrine, to be planted in the Mariengarten (Mary’s Garden) as guarantors of the Foundation for the next 50 years, having as guiding principles the same three points proposed by Father to the founders… María Isabel Torrejón C., leader and member of the Cenacle Shrine of Foundation’s Mothers’ Branch– Agua Santa, told us.

But it was in 2007, on the 60th jubilee, when this pilgrimage officially took place and it happened that… “The Director of the Mena Foundation opened up the doors of the chapel and garden to us and… loan and restitution agreement!  We now counted on a new place to attach ourselves to our Father and Founder, and with our history, disposed to the entire Movement…” we are told by John Smok and Francisca Cantin, (Families’ Branch of the Cenacle Shrine of Foundation – Agua Santa) who, along with many other people, with their generous surrender of love to the founders’ mission, were the craftsmen of this gift.  And they add:

“All those hearts’ openness touched by God is in the foundation of Father’s Route.  However there is a second aspect, much stronger, deeper, which left a seal in our Covenant life, and that is having more concretely experienced the way in which God thinks of each one of us, the mysterious way in which He plans our lives.  “Before I formed you in the womb, I knew you, before you were born I dedicated you” is not only in the book of Jeremiah, it is lived today and it was lived in the history of the places attached to Schoenstatt’s foundation in Chile…The Mena Foundation, for example, is a key point in Father’s Route because there Father Kentenich sealed Covenants of Love, celebrated Mass, and he was accommodated there the three times he was in Valparaíso.  He was able to stay there in that house because the Sisters who had come from Temuco to work in the Mena Hospital were living there.

This perfect framework designed by God is also very present in the house located at #28 Pasaje Quinta.  What had God been plotting for years that finally motivated Father Kentenich to personally declare Schoenstatt’s foundation in Chile?

Paulina Glatzel, leader and member of the Mothers’ Branch (Cenacle Shrine of Foundation) – tells us:

“For sometime now, I have been in charge of receiving pilgrims, who have a great desire to be where our Father Kentenich was.

In the beginning, I saw this great task as a mission that I would not be able to fulfill well.  To be able to pass on the history, the happenings in the 30’s and 40’s was a great struggle for me.  But something special happened, and I received a great gift.  My heart soaked up the history, and again and again, I live those threads of divinity that intertwined and gave way to our foundation.

Therefore in the guided tours at these places, I try to pass on that deep faith… that surrender, and desire to build Schoenstatt with the Covenant of Love lived and proven like those who were first.

I want each pilgrim to have a personal encounter with our Father and Founder.

Each pilgrimage is different; there are large groups, small groups, and even just of two or three people.  They come from different places.  But they all have something in common, according to the measure in which they listen to the events, the experiences of the first Sisters, of the Pallottine Fathers, of the ladies, and of our Father and Founder.  Their faces and eyes are transformed, and with the heart, they demonstrate that they have understood divine action in human instruments.”

Today the completely renovated Mena Foundation Chapel receives us after being greatly deteriorated by a water leak.  Also affected was the house on #28 Pasaje Quinta, which functions as a shelter for pregnant teenagers in danger of miscarrying (María Ayuda), the San Luis parish church, whose altar is a copy of the altarpiece of the shine, and, of course, our Cenacle Shrine of Foundation in whose interior the original Founding Document that Father Kentenich signed with the mothers can be found.  The Family from the Fifth Region (Valparaíso) has made many efforts to keep this treasure alive, where the Chilean Movement’s history was forged.  Today we have initiated a current of attachment in our life groups, councils, and perhaps soon, we may have groups receiving our Schoenstatt treasure in those holy places.

We, Schoenstatters of today, are lacking an awareness of the places on Father’s Route being holy places because a holy man’s path marks them.  This year, on the occasion of commemorating the 70 years of foundation, we should increase the attachment with those places, especially with our life groups, we are told by John Smok and Francisca Cantin.

We invite you to travel with us the footsteps of our Father and Founder in Valparaíso. 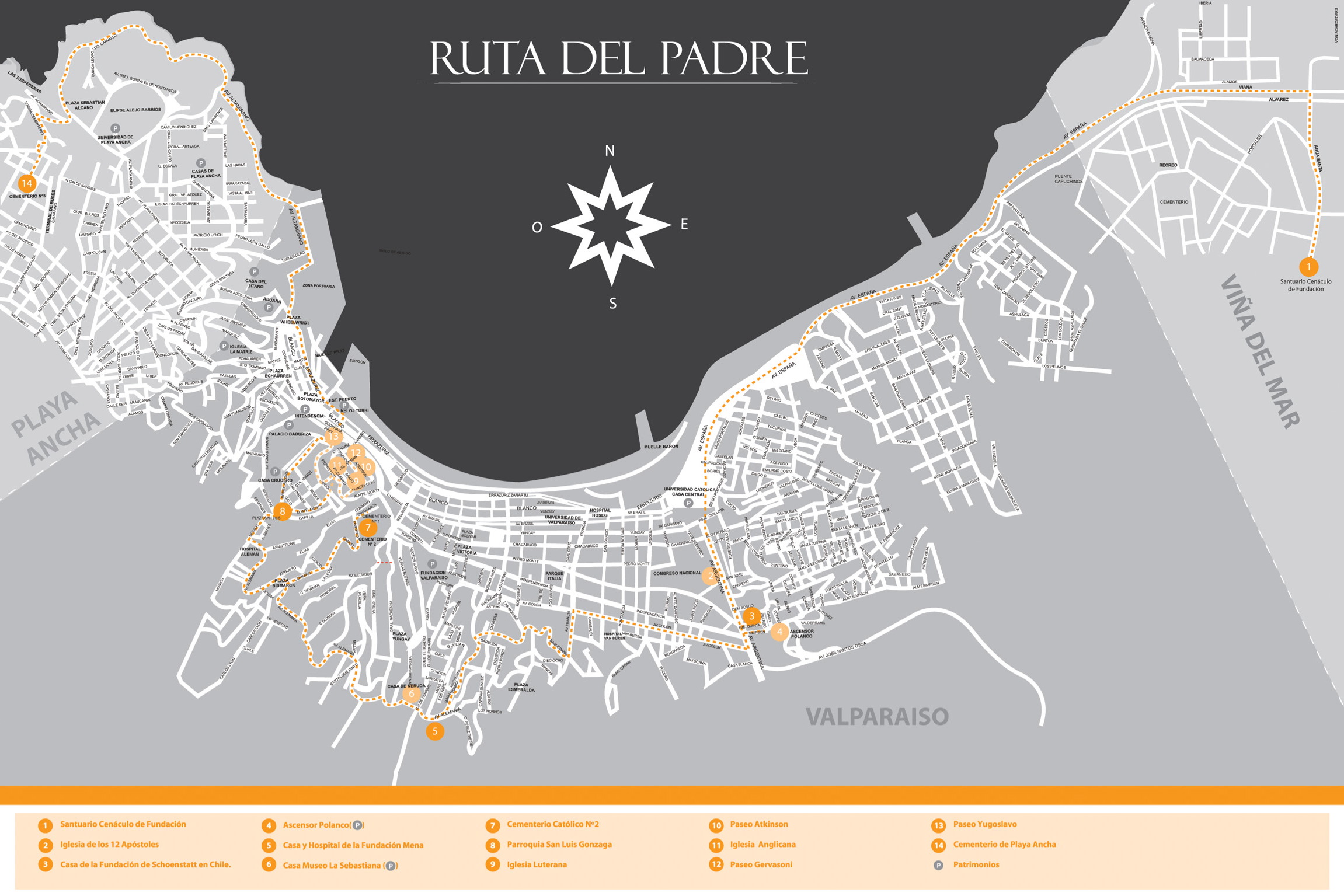