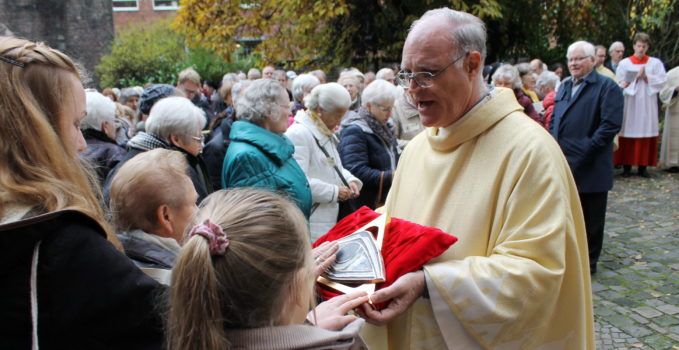 The most moving moment is very quiet and almost as surprising as the moment fifty years ago when Fr Kentenich proclaimed and entered into the covenant of love with God the Father. It happened after the solemn Holy Mass when the organisers were already standing in front of the shrine, and were busy assembling the procession to the shrine. One of them asked, “Where is the Father Symbol?”

It was in the hands of Fr Juan Pablo Catoggio, who was carrying it out of the “Elendskirche”. He turned round and invited everyone, really everyone, to touch this symbol and in this way enter into the covenant with God the Father. Surprised faces, sometimes timid gestures, not quite touching the Father Symbol. “Touch it, touch is properly”, Fr Juan Pablo encouraged them. The children were more spontaneous and placed their hands on it. There followed almost twenty minutes of personal encounter: old hands, trembling hands, children’s hands, young hands, big, strong hands, a couple’s hands …

“What matters is to encounter God in a living way, and allow ourselves to be touched by him. God is a reality, the reality, as our Father often said, a Person, someone we can speak to in a familiar way; even more, God is not merely a reality, and not merely a familiar friend, he is also our Father, he is Love itself, our mercifully loving Father. Our Father sometimes tried to intensify what he said to the greatest degree possible. He said: God is our infinitely loving and merciful Father. That is our picture of God, which we as the Schoenstatt Family have experienced as a gift, but also as a task and mission. This experience of the Father, and this covenant with the Father, as an answer to his merciful love, is the heart and centre of the Gospel”, Fr Juan Pablo would say in his talk that afternoon. In these moments something of what he was to say had taken place.

Our Prophet leads the way for his Family

“The Cologne Schoenstatt Family had invited Fr Kentenich to put up the symbol of the Father, the Father-Eye, in the shrine. He gladly accepted the invitation and he carried out their request. However, he had far greater things in mind, he wanted for his part to describe this event as the covenant of love of the whole Schoenstatt Family with God the Father”, Fr Juan Pablo Catoggio said. He is the chairman of the General Presidium of the International Schoenstatt Work, and he had come to the Schoenstatt shrine on 5 November 2016, towards the end of the Holy Year of Mercy, along with around 250 people, to celebrate the fiftieth anniversary of what had taken place there fifty years before, and that had not only surprised those present, but also caught them unawares.

As Fr Juan Pablo continued, “Naturally no one had guessed, no one had said anything about it, but our Father and Founder had simply acted without asking anyone, and without explaining anything. It was the covenant of love with God the Father entered into by the whole Schoenstatt Family. Allow me to dwell on this and reflect on it, because our Father didn’t do this sort of thing very often. He did do it a number of times without getting anyone’s agreement, and without waiting for something to come from us, from the Schoenstatt Family. He took the initiative, or took a decision, which he could only do with the authority of the Founder. He could do it. He had the authority of the Founder. (…) To me these are very important moments, because they show how our Father repeatedly looked for God’s will through faith in Divine Providence. Constantly! He searched for God, he searched for God’s will, and constantly only asked himself one question: What is in God’s plan? However, often he was the only one who had this insight; he had won through to the conviction, and then he took the step and answered God in the expectation, which was mostly fulfilled, that the Family would follow him, that the Family would take up his favourite idea – 18 October – or join in his plan in other ways, going along with our Father’s step. That’s also what happened fifty years ago. Our Father simply took this step, going ahead of the Family, showing the way as Founder, opening up the way, and took the first step: The covenant of love with the Blessed Mother leads us to the covenant with the Blessed Trinity, and ultimately with God the Father. He not only proclaimed it, he did it. Words and signs, words and deeds, always combine with him, and we notice that with regard to this special action or decision as founder, the Prophet appears in a special way. He stands there not so much as an educator who gets processes going and accompanies them; he stands there as our Father and Prophet, and as the Founder, who had to act in that way and could not do otherwise.”

A resolute interpretation by Fr Juan Pablo, who at the start of his talk said that he had thought he had been invited to this celebration not so much on account of his office, but of his origins in Argentina – the country with the Father mission: the covenant with God the Father, the covenant of love with the merciful Father, as Fr Kentenich’s prophetic act like few others, in the hope that the Family would follow. 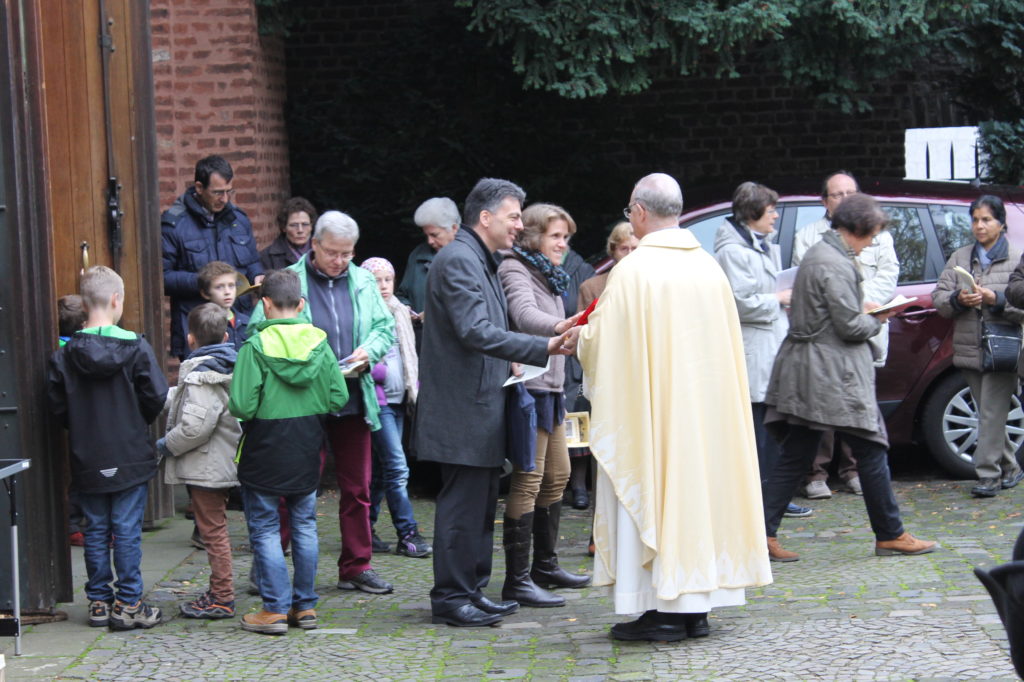 The families in the Schoenstatt Family Federation, who had initiated the project “Trust GOD” (GOTTvertrauen) , had intuitively grasped that such a process could be started not only in connection with a Jubilee celebration like so many others. In the middle of the year, and in the middle of the Holy Year of Mercy, they had taken the covenant with God the Father onto the streets, in the fullest sense of the word, when they walked on pilgrimage from Cologne to Schoenstatt. It could be heard and seen on this day in Cologne, not least because of the presence of so many families belonging to the Family Federation, and the joyful reunion with many who had participated in the project “Trust GOD”. At the end of the day Diana and Lukas Schreiber testified to the way the words of Fr Kentenich about the longing of the heart to enter into a covenant with God the Father had become a reality to them. If God is only another area in what is already a very full life, and one has to do justice to his demands, then “we run away”. In contrast, the covenant with God the Father means allowing this living God to penetrate the whole of our lives, and allowing this Father to surprise us.

In order to allow this to become an experience to many, they initiated the project “Trust God” with others. Werner Philipps reported on the 107 kilometres the people aged from 4-84 had walked in order to pass through the Holy Door at the Original Shrine, and then return to everyday life to spread trust in GOD there. 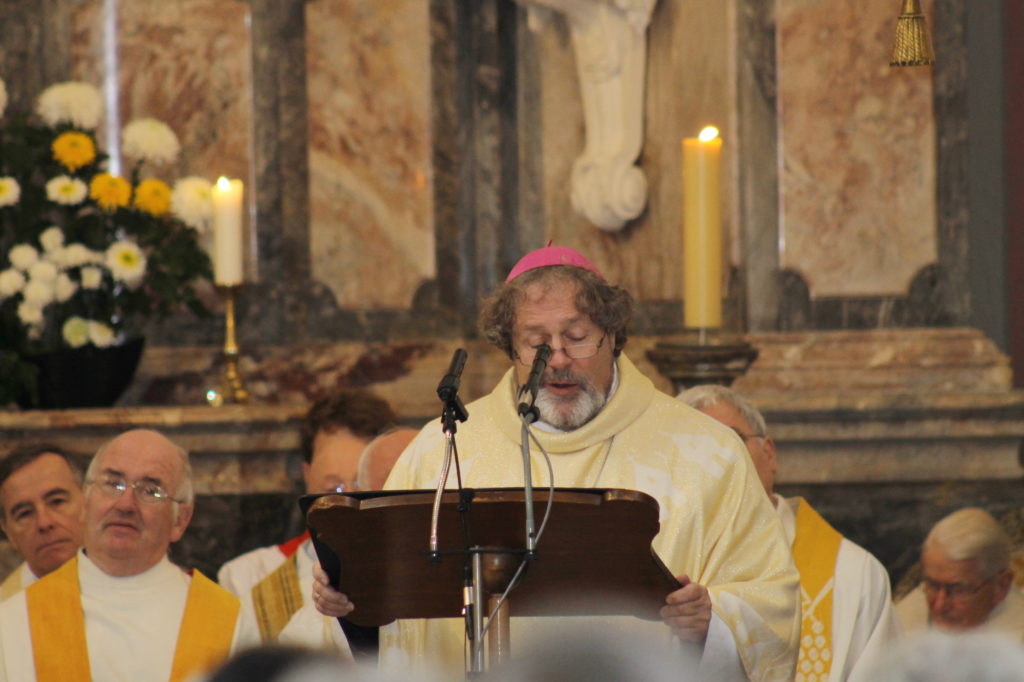 The celebration began in the morning with a beautifully prepared Holy Mass with musical accompaniment, celebrated in the Elendskirche with Auxiliary Bishop Steinhäuser. He was representing Cardinal Woelki, who was in Albania that day attending the beatification of the Cologne priest, Antonius Joseph Marxen (1906-1946), who was beatified along with 37 other Catholic martyrs of the Communist regime of that time in Albania. Auxiliary Bishop Steinhäus pointed out that even though he was not a Schoenstatter, he was well aware of the covenant of love with Mary, but the covenant relationship with God the Father was completely new to him. Yet it is completely relevant today. Today we don’t simply need a picture of God, a just God, but of a mercifully loving Father. That is the heart and centre of the Holy Year of Mercy proclaimed by Pope Francis. In the parable of the merciful Father, Jesus shows us what God’s attitude to us is: he is the infinitely and incomprehensibly merciful Father. The Holy Doors in Rome and also Cologne, for example, are symbols of the wide-open arms of the Father.

Together with Auxiliary Bishop Steinhäuser and Fr Schnocks, who represented the Diocesan President who was ill, more than twenty priests from the four Schoenstatt communities for priests surrounded the altar. 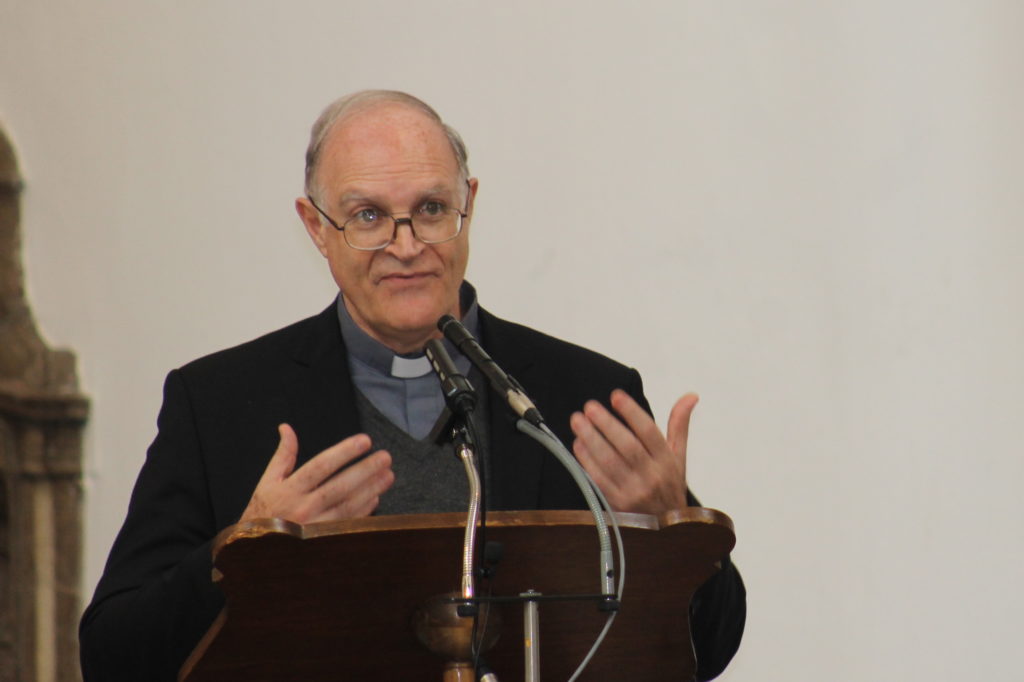 Covenant with God the Father: Gift, task and mission

The time had come for friends to meet, for conversations, prayer in the shrine, for a survey of 30 October 1966 – Hildegard Beckmann spoke as a witness at that time – for testimonies from the various generations. Many were moved by the fact that the celebration was taking place in the time between the death and burial of Fr Heinz Künster, the guardian of the Father Symbol for the Original Shrine. Hildegard Beckmann, one of the forces behind the celebration, said that what mattered was not so much to look into the past, as to point out the importance of the covenant with the Father for today. Just as Fr Juan Pablo had tried to do in his talk that afternoon when he showed that this covenant with God the Father is an answer to the needs of our time, that it is the core of the Gospel and a grace we have to pray to be given. It is also a task for each of us – in the first place a task to find our way personally into this covenant, and then to bear witness to it in such a way that others can do the same. “The covenant of love with God the Father is a gift, a gift of grace, a personal task and finally also a mission, a task in our service to others”, he said. He then quoted Fr Kentenich who on 19 March 1952, when he put up the Father Symbol in the Father Shrine in Argentina, prayed,

“So let us pray and beg that this simple act today will unfold its full symbolic force; let us pray that God gives us men and women who can not only speak beautifully, but who can understand the whole power and force of the elemental mission God has given us for our times, and who are ready to give their lives for it.” 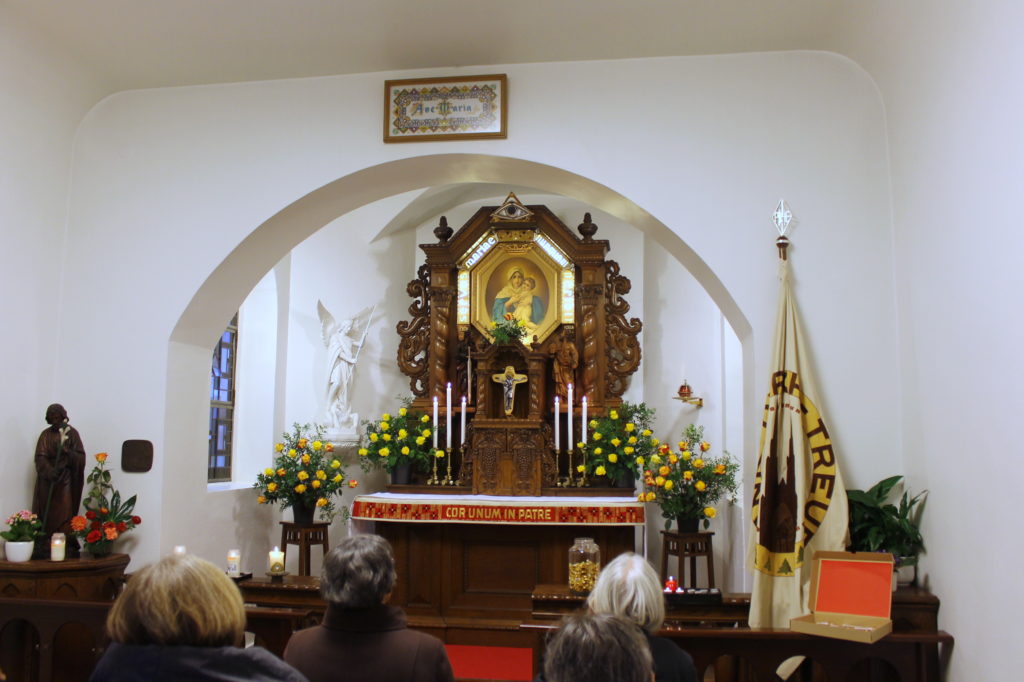 MP3 of the Talk and the testimonies – German: 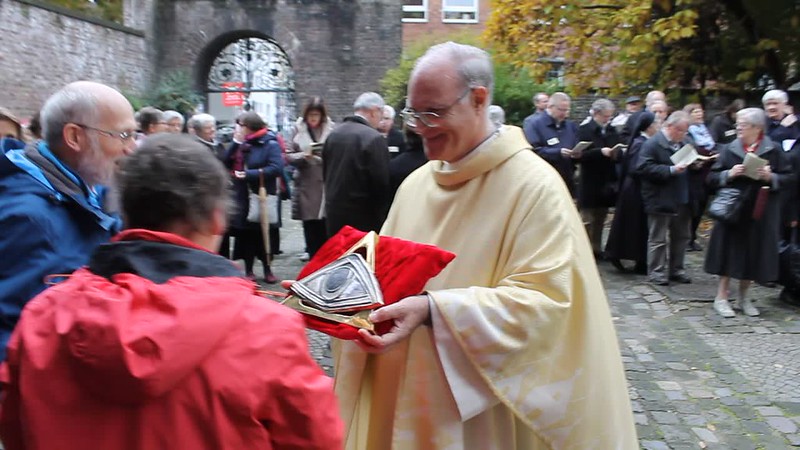