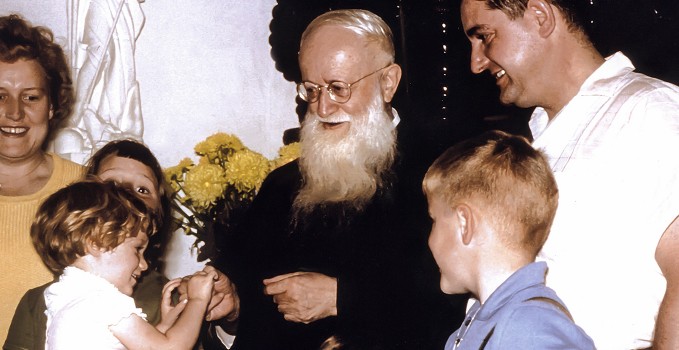 A square with a Father’s name, or better put, a Father and Founder’s. Londrina/PR recently inaugurated grounds named Fr. Joseph Kentenich Square. In the Gleba Fazenda Palhano neighborhood, at the intersection of Zuinglio and Martin Luther Street now bears the name of Schoenstatt’s Founder.

Alderman Rony dos Santos Alves introduced city ordinance number 12.261 because, according to him, “The first and simple reason is the square is next to the Mater Ter Admirabilis Training Center, and above all, for all the work that Fr. Joseph Kentenich carried out in Londrina.”

In 2014, the city donated a farm consisting of a half block, for Santa Casa [Holy House], where the new Mater Ter Admirabilis Professional Educational Center was built. Within the terms of the donation, one of the corners was designated for the construction of a square, and it is precisely this part of the land that now carries the name of the Father and Founder. The Schoenstatt Family joyfully received this gift: “By naming the square, Father’s Square, the city is recognizing Schoenstatt, which has been present since the city was formed. It is a great joy and unquestionably an honor. Sister Elvira María Perides Lawand, coordinator of Santa Casa and the Director of MTA training center, said, “Through its leaders, the city is recognizing Fr. Joseph Kentenich’s mission and everything that the city received through his intermediation and the work of the Schoenstatt Movement.”

For a Covenant culture

“This tribute is fundamental to maintain the flame of Schoenstatt’s work on fire and, at the same time, to maintain Fr. Joseph Kentenich’s memory. When people hear about Fr. Kentenich’s history, all of us are touched – and I say this as a Methodist, I am not a Catholic. I believe that all Christians from every denomination should read more about Fr. Joseph Kentenich and imitate many of the things that he carried out, many things,” the Alderman affirmed.

More than just being a simple piece of land, “The square could be an opportunity for evangelization,” according to Sister Elvira María: “We could design it in such a way that shows our Founder’s life and mission. It could also lead to the MTA Shrine, since it is next to the Mater Ter Admirabilis Center, I believe that later there could be an attachment. It is a visible contribution providing Covenant culture that will benefit people from Londrina.

The Schoenstatt Apostolic Movement has existed in Londrina since its origins. It was one of the first cities in Brazil to welcome the Sisters of Mary, who later founded the Colegio Madre de Dios [Mother of God School], and they collaborated a lot – and they still do – by administering Santa Casa. Fr. Joseph Kentenich was in Londrina several times during the ten trips that he made through Brazil, and he enthroned the MTA in the Cathedral.

“Our Father deserves to be honored for everything his visits meant to Londrina and Brazil; this, above all, is the recognition of being the Founder of an international work that has been present in the city since its founding, because from the beginning, the Sisters of Mary worked in education, health and catechesis,” Sister Elvira María Lawand said.

For Rony Alves it is about a deserved recognition: “Londrina has a moral debt to the Sisters of Mary for the work that they carry out, and in a way, this work is a continuation of Fr. Kentenich’s mentality and his selfless and voluntary spirit. So this is a way of recognizing the memory of those, who independent from the religious factor, collaborated and contributed to the well-being of the city and its people.”

Now the next step is to take care of the aesthetic project of the square, giving it “a face,” and thus having a formal inauguration.