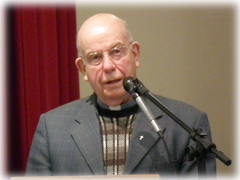 ARGENTINA, Sr. Clara María Bercetche. Whiffs of the great event in 2014 are entering the soul and the desire to be well prepared grows. The Father Joseph Kentenich Secretariat in Argentina wanted to offer an opportunity for this by offering a new Seminar on the person of the Father and Founder of Schoenstatt.

The invited speaker was Father José Neuenhofer from the Federation of Diocesan Schoenstatt Priests. He was able to spend eleven months with Father Kentenich during his exile in Milwaukee. He is a privileged witness to the life and mission of our Father and Founder. Furthermore he is an eminent photographer. Many of the well-known images of Father Kentenich are credited to him, among them is the very famous image of the child (Mike Fenelon) holding Father Kentenich’s hand.

From all cardinal points in the country and from the eastern sister republic of Uruguay, 135 participants arrived at Solaz de María, the retreat house in New Schoenstatt. All participants desired to go deeper into the life and charism of Father Kentenich. 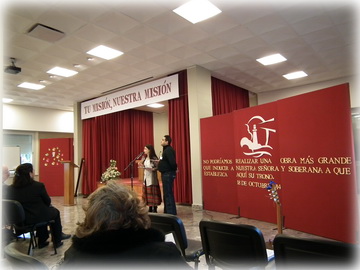 The seminar commenced on Saturday morning and very loud applause accompanied the entrance of a large photo of our Father and Founder. It was situated in the place of honor beside the stage. After a brief prayer and greetings to all present, everyone listened to Fr. José Neuenhofer’s marvelous presentation. The title of his presentation was: “Your mission, our mission.”

After the presentation, a workshop followed consisting of the analysis of Father’s texts on his mission and how he incorporated each member of the Family into it.

At 3:00 P.M., there was a brief video amply explaining the activity of the Secretariat in the areas of popular devotion, in academic and ecclesial areas, and in multimedia production. Ultimately, all were invited to participate – according to their potential – in this great endeavor to take Father Kentenich to the Church and world and explaining the diverse means for doing so.

Moments of Father’s life in Milwaukee

After a most enriching exchange among all those present, it was time for one of the most desired moments: to be able to view a film depicting moments of Father’s life in Milwaukee. He could be seen celebrating Holy Mass in the Exile Shrine, greeting different persons, welcoming the children who swarmed around him taking his hand, and concluding with the precious image of Father at Lake Michigan with the soft rippling waves brushing up against the shore in the background. 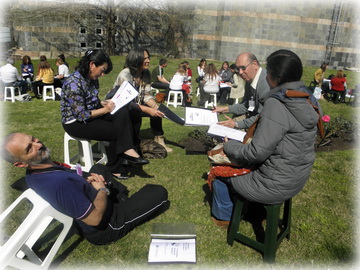 A brief pause followed and afterward they listened to the testimonies of different people who extend Father’s mission in different circles: a member from the Father Kentenich Bioethics Commission, a member from Mary’s Volunteers who works in a public hospital, and a family who shared how within their family, they live the reality of the Home Shrine and developing from there an intense family pastoral approach.

Fr. José Neuenhofer’s second presentation was entitled: “From the Covenant of Love, renewing social order.” In his presentation, he developed the social question from Pope Francis’ perspective, making a parallel with our Father and Founder and culminating with some brushstrokes from his experiences with street children with whom he presently works in La Paz, Bolivia.

Not only did Father Neuenhofer delight everyone with his presentation, but he also knew how to insert all types of anecdotes and jokes, which he made with the audience who did not want to miss a single word.

Committed to his mission

The conference ended on Sunday with the topic: “How to discover and fulfill our own personal mission?” The conference concluded with a workshop led by Sr. Clara María who applied what had been heard to personal life.

In addition Holy Mass was celebrated in the God the Father Church and there was time for greeting our Father and Founder at his statue beside the Shrine. There, the commitment to his mission was renewed and with loud shouts of “viva” and thunderous applause, these most fruitful two days came to a close.