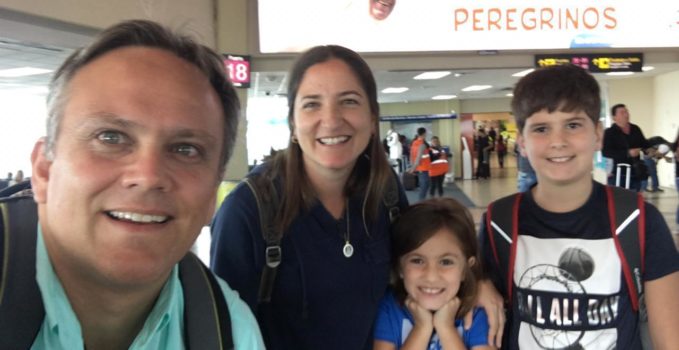 Pilgrimage to WYD as a family

WYD2019 COSTA RICA AND PANAMA, by José A. Martínez and Anelena Hueda •

This year undoubtedly had a very blessed beginning for the Schoenstatt Family in Costa Rica— for this community gathered around the Family of Hope Shrine always tries making the motto containing the Shrine’s name come alive. Furthermore it was a family renewed and strengthened in hope that Divine Providence gave us in what we experienced during the Schoenstatt youth meetings at the HINENI and IGNIS 2019 celebrations. All this was crowned by the Pope’s visit to Panama for WYD, which filled these Central American countries with grace, and those of us who went on pilgrimage to meet him in the vicinity of the Canal.— 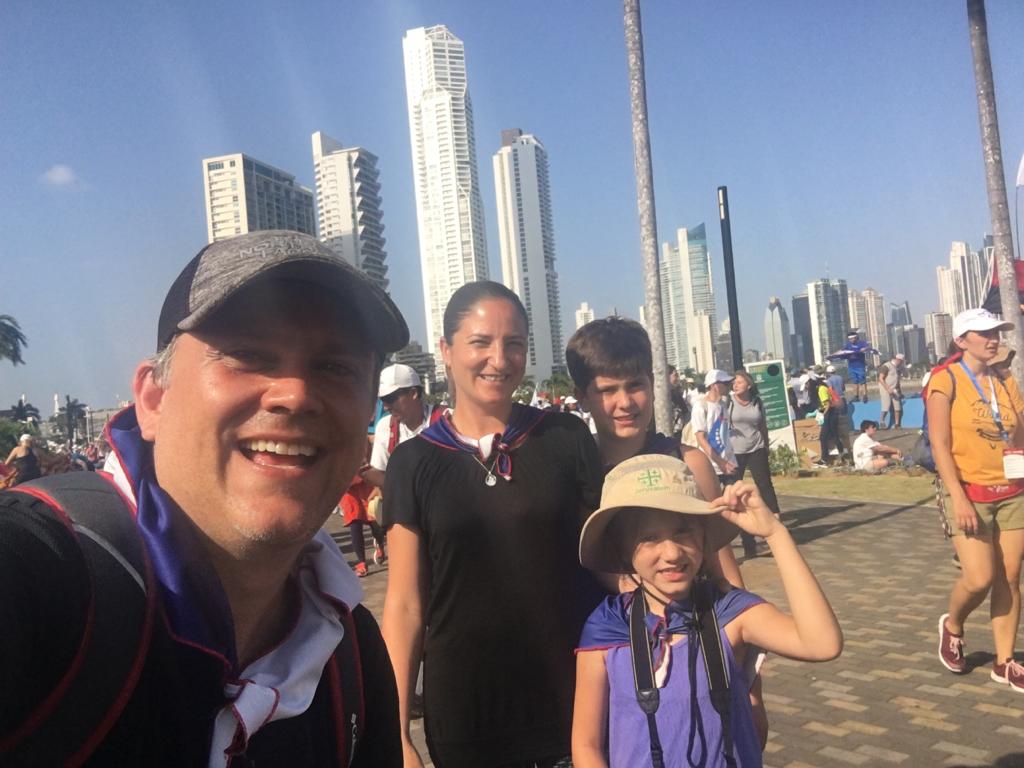 Truth is… as a couple we hadn’t planned to go to Panama. We never seriously considered it for various reasons… other personal commitments, work, what in Costa Rica we call the “January slope” (usually it is a financially complicated month because of December’s extraordinary expenses), etc.

Our focus was to collaborate with what the Movement in general and the team of organizers might need so that the previous youth meetings would be successful, and so that the youths, fathers, sisters, advisors, volunteers, and other participants could prepare their hearts from our shrine and thus arrive on fire for the day. Finally we were just one more, tiny cog in the machinery the Costa Rican family used to organize HINENI and IGNIS, one of the many couples that offered themselves with joy and with anonymity to do some of the many modest but necessary jobs required to support the activities.

But as it usually happens in the missions, where the “missionary is always the first one missioned,” it was inevitable to fall prey to the contagion of all that joy, enthusiasm, and those emotions arising from these youth meetings we bore witness to as collaborators, but not actually as involved participants. Like many other couples, we could not resist taking the step that led us to feel we shared in all the enthusiastic energy emanating from those young people, from the Masses, from Adorations, from the songs, and from the Shrine.  And so that was how we began asking ourselves what would WYD be like, as a desire to follow these young pilgrims path of going on pilgrimage from our Shrine to Panama emerged.

However the doubts immediately began, “We waited too late planning it,” ” What about work?,” “There won’t be any room on the buses or flights,” “The hotels must already be full,” “The costs must be very high due to the proximity of the dates,” … Then we said to each other, “It would be better to scratch the idea altogether,” but because of these inexplicable things, we decided to leave the intention in our Home Shrine and offer it in prayer.

The next day prior to a talk for young professionals, we met with a priest from the Movement, who very providentially was the same Schoenstatt priest who offered Pope Francis a Pilgrim MTA, and to whom Pope Francis later explained about having this image on his bedside table. The priest was coming from Panama (where he was part of the Vatican’s liaison in the organization of WYD), and he immediately encouraged us to take the step, not to miss the opportunity to attend the meeting with the Holy Father, to take risks, and to leave at the last minute since he is absolutely certain that we would not regret it. He told us that, if we gave our yes, it was certain that doors would open and we would see each other there. I was going to pray for just that…

And so it was one day before Francis’s arrival at WYD, we finished deciding and began looking for a way to get to Panama. To our amazement, everything was given to us so we could go on pilgrimage to WYD as a family (with the exception of our eldest daughter, who was already there with her Schoenstatt youth group). Undoubtedly it was in God’s will – and to think that we hardly dared to try it because of negative preconceived ideas – we affirmed to ourselves almost in unison.

Here we are – in Panama

We arrived in the Canal City full of joy, but a little anxious since we didn’t know for sure how accommodations were going work out, if we would be able to attend the activities with the Pope due to the need of tickets, in short, with the uncertainty of making a last-minute trip and with very little planning (practically zero). Not even our eldest daughter knew we were coming, since everything became concrete when she was already in youth camp at WYD. But we couldn’t convey that feeling of anxiety to our kids, who were over the moon with excitement, because they never imagined spending even a day there before.

But the Blessed Mother took perfect care of us, and that same night, we were able to meet all the Movement’s pilgrims at the Marian Festival they had prepared at San Francisco de la Caleta Parish. We immediately felt them welcoming us as brothers and sisters in true Schoenstatt spirit. We were then greeted with open arms by many familiar faces that were amazed to see us there. We met with esteemed Schoenstatt companions (both Ticos and foreigners), and we met new friends. Our eldest daughter didn’t know if it was a ghost, or if it was her younger sister when she suddenly saw her by her side. And with laughter and embraces, the priest, who encouraged us not to miss the opportunity to go on pilgrimage, told us in Spanish, but with a Portuguese accent, “What a joy, the crazy family dared to come!”

The Marian Festival, Father Santi Cacavelos, Father Pepo Celis, and others spectacularly set to music, culminated with the young people singing Franz Reinisch’s hymn at the top of their lungs (and some of us who were not so young but felt that way). It was like the final sending off message that our beloved black cross sent us through time and through the voices of the youth, to come to meet the Holy Father the next day at the Stations of the Cross. 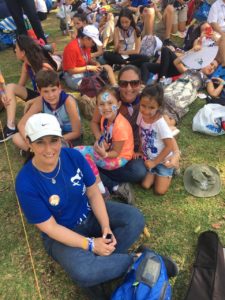 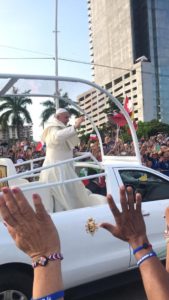 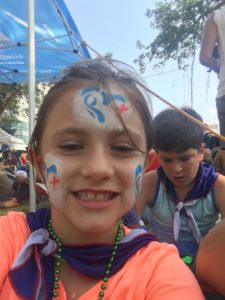 That night was only the beginning of a unique adventure, a several days’ journey, where the joy lived in HINENI and IGNIS would continue to increase within everyone thanks to the faith that we shared, and to Francis’ messages that greatly challenged us, but also in a simple language proper to our times – it was marvelous to see the boys grasp this concept of Mary as the influence of God completely naturally. Where we could breathe the air of divine joy, and experience a love that is only felt when you open your heart to Christ, that joy that uniquely radiates and was perceived when you walked with another, when there was an encounter between family.

Finally yes, we confess there were indeed some discomforts and some setbacks. But nothing could even cast a shadow over what we received as a family: hearing our 7-year-old daughter’s emotional screams as the Pope passed only a few meters away as we carried her on our shoulders; seeing our 11-year-old son walking with his friend, Father José Luis, as they walked together through the streets of Panama City with a shared sense of anticipation of soon being before the Holy Father: for witnessing the happiness shining on the face of our teenage daughter and her friends in the Covenant group as they were part of the thousands of young people coming to meet their friend, Francisco; for the opportunity God the Father gave us to see our dear friend Luis Fe invited to share the stage with the Vicar of Christ to give a message to the pilgrims; for the privilege of being able to hear first hand the Pontiff’s message exhorting us to be “the now of God” and “to pray for him;” for the graces that were palpable there day by day; for the coexistence and walking in the company of a whole, young, and willing Church of which we now feel more part of than ever; and in short, for the shared moments that engraved on our souls for the rest of our lives.

And so we returned home a few days later, being the same as always but also changed (although it sounds strange)— with renewed hope in a world where negative news and attacks on our Catholic values are part of every day’s special menu— with our confidence in God’s providence strengthened as we left for Panama at the last minute taking certain risks, with the challenge of learning some Portuguese over the next three years, while harboring the desire to meet with the priest that gave us the needed push again, and to be able to greet him in Lisbon this time in his language. 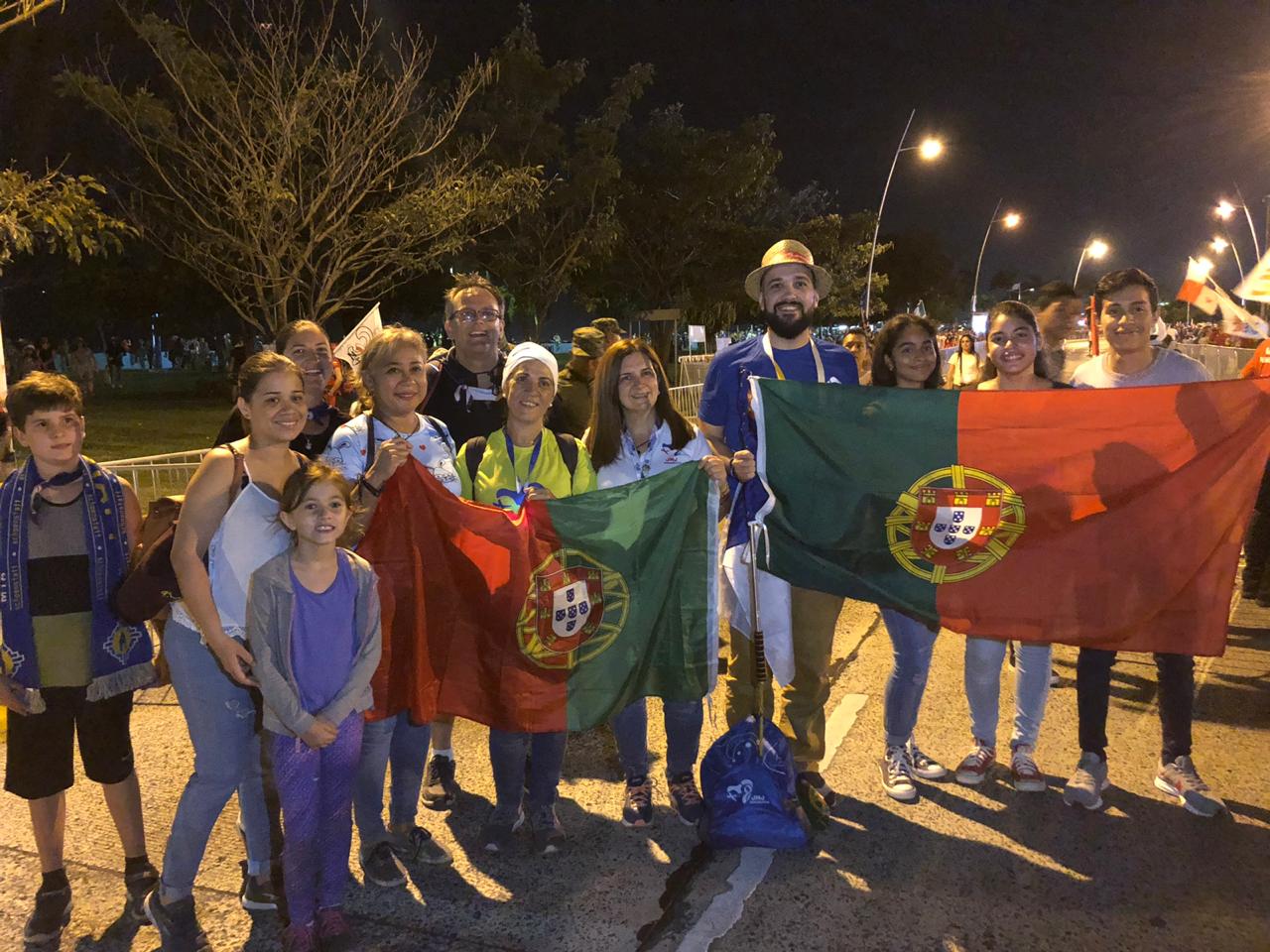