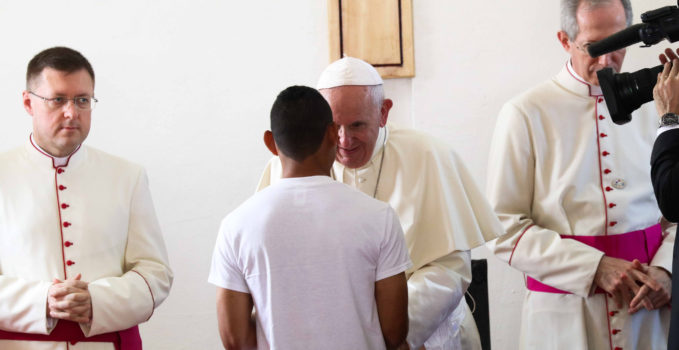 The Good Shepherd to goes in search of the lost sheep, and found it today

What a fatherly face, the face of a good shepherd, a face of solidarity, Pope Francis’ face as he listened to the testimony of this young boy at the Las Garzas Detention Centre for Minors in Pacora. Pope Francis is with his favorite people, with those in one of the existential peripheries where he urges Christians to go. One of these existential peripheries where Schoenstatters from various countries go are pastoral ministries to prisons, like the “Visitation of Mary” prison ministry, and the Casa Madre de Tuparenda prison ministry in Paraguay that I have the privilege of knowning well.—

“I deeply hurt someone close to me,” Luis told the Pope. “When I was arrested in 2016, I thought everything had ended. In the beginning, it was very hard to live with other prisoners deprived of freedom, but when I was taken to the Pacora Detention Centre, I was thinking about things one night and something told that it wasn’t all over, because I have a great purpose.

At that moment, I understood the God the Father was with me, and if I am here right now speaking with you, it is because of the grace and love of God, my beloved Jesus. I am thankful, because he put people in my path to help me finish my highschool studies and to change my life. My hopes, or how I see myself in the future is as an international chef and a refrigeration specialist. I hope to give my mother this joy and to be in communion with that part of my family that I lost.”

Between the joy and the love on the Holy Father’s face, and Luis’ words, I felt as if I was once again at the youth penitentiary in Itauguá, listening to their stories and witnessing the paternal-maternal and merciful listening of Fr. Pedro Kühlcke and Ismelda and everyone else who go with him week after week.

Later, during the press conference, director Emma Alba de Tejada related how Luis and other youths had been granted conditional freedo after the Pope`s visit,  and that one young man, who earlier had been filled with the desire for revenge and sadness, said that after confessing to the Holy Father, he was “transformed and I want to change my life and I can.” 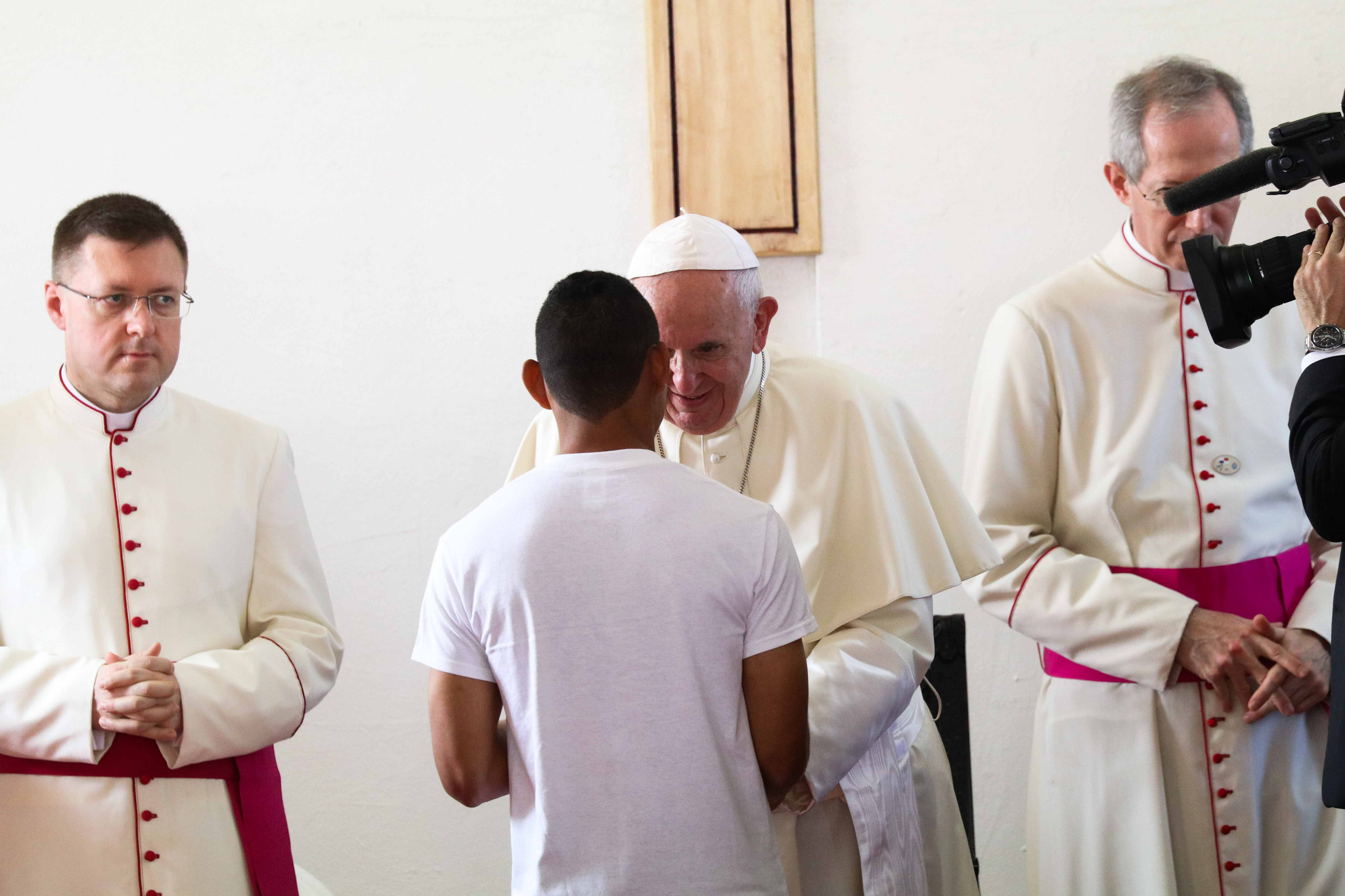 The Las Garzas Detention Centre for Minors was founded in 2012 and holds 192 prisoners. Now seen as a model, not only in Paraguay, the inmates must participate in compulsory seminars organized by the National Institute for Professional Training and Training for Human Development (INADEH). In addition to this, a team of social workers, psychologists, and teachers cooperate with a rehabilitation system under the supervision of UNICEF. The institution has also received economic support from the European Union to carry out this mission.

Overcoming a “culture of labels”

It is the first time that the penitential service, a key moment during each World Youth Day, takes place in a prison. The Pope wanted to take the World Youth Day to young people who would not be able to attend, who would not be able to leave the place where they are carrying out their sentence; for this reason he travelled 50km to the detention centre for minors, where the young people from several detention centres were waiting for him. Given its nature, only the inmates were involved in the preparation of all parts of the liturgy, from the hymns, the readings and at the petitions.

“Jesus is not afraid to approach those who, for countless reasons, were the object of social hatred, like the publicans – we know that tax collectors grew rich by exploiting their own people and they caused great resentment – or like those who were called sinners because of the gravity of their faults, errors, and mistakes. He does this because he knows that in heaven there is more joy for a single converted sinner than for ninety-nine righteous people who do not need conversion (cf. Lk 15:7),” said the Pope during his homily. He also is not afraid to draw near to those so-called sinners, useless, marginalized, and criminal people…”He is the Good Shepherd who goes in search of the lost sheep, and found it today,” said Emma Alba Tejada. It is possibly the first time at a WYD that a Pope preached to only 100 young people, but his words touched them, and I hope many more as well, especially those who are in solidarity with those who were weak at some point in their lives…and who knows, perhaps even those who call themselves “righteous.”

The Pope gave a strong message against what he calls the “culture of labels”, the way of labelling people:

“Where people’s lives are concerned, it seems easier to post signs and labels that petrify and stigmatize not only people’s past but also their present and future. Signs that ultimately serve only to divide: these people are good and those are bad; these people are the righteous and those the sinners.

This attitude spoils everything, because it erects an invisible wall that makes people think that, if we marginalize, separate and isolate others, all our problems will magically be solved. When a society or community allows this, and does nothing more than complain and backbite, it enters into a vicious circle of division, blame and condemnation. It takes the social approach of marginalization, exclusion and confrontation, leading it to say irresponsibly, like Caiaphas: “It is expedient that one man should die for the people, and that the whole nation should not perish” (Jn 11:50). Normally the thread is cut at the thinnest part: that of the most vulnerable and defenceless.” 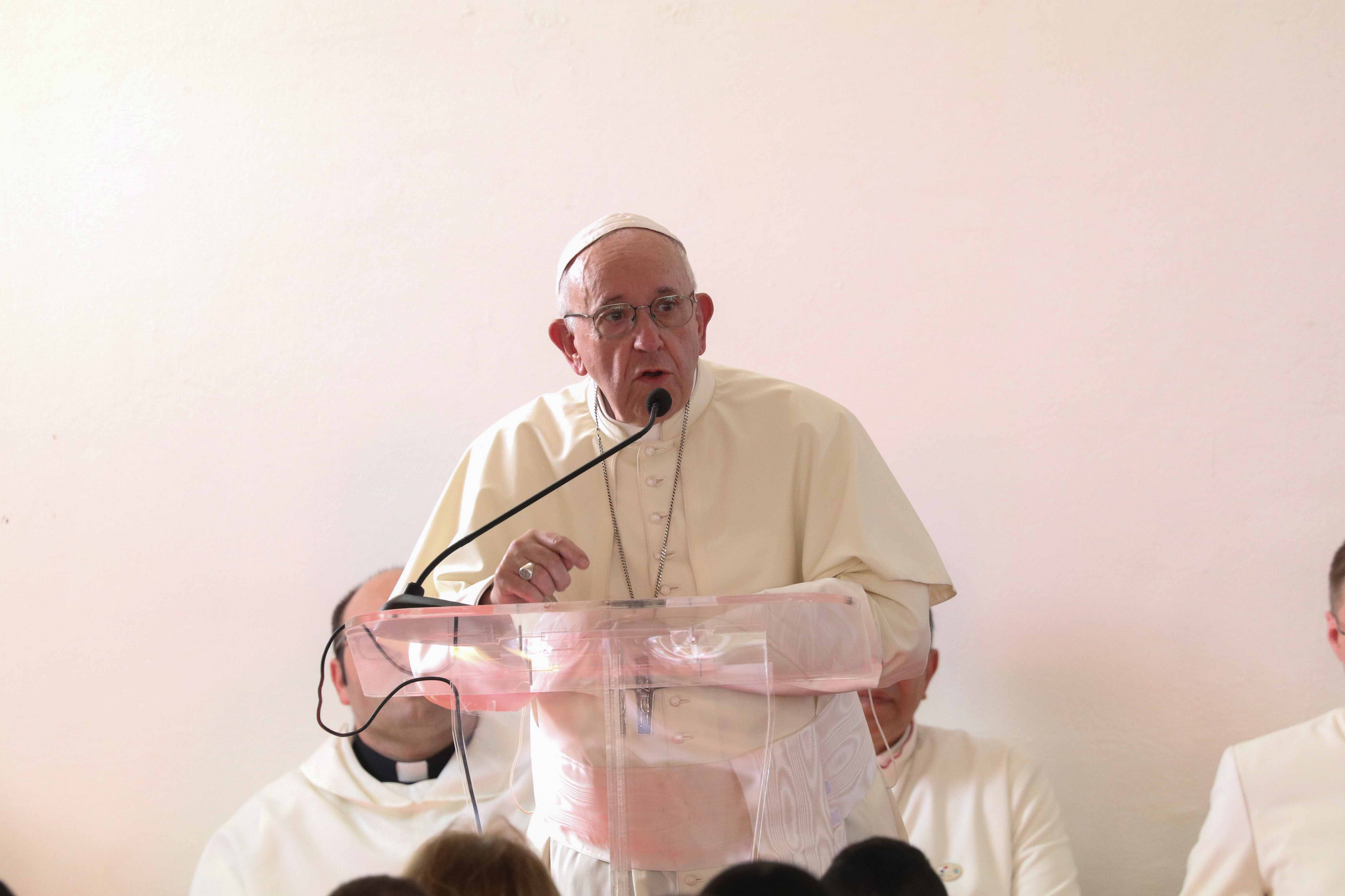 The purest water is tasteless

He added a clear example that sticks in the mind: Which is the purest water? Yes, distilled water. But once a farmer told me: “Father, the water is so pure that it doesn’t taste like anything.”

This is how it is with the righteous, with the pure, says the Pope, they don’t taste like anything and cannot attract anybody! In contrast, Jesus accepted the complexity of life, the personal histories of weakness and success, of falling and getting up again, with “a love that gives rise to a dynamism that is able to offer solutions and opportunities for integration and transformation, for healing and forgiveness, paths of salvation. By eating with tax collectors and sinners, Jesus tore down a rationale that falsely separates, excludes, isolates, and divides between the “good and bad.” And he does not do it by decree or with good intentions, much less with voluntarism or sentimentality, he does it by creating bonds that make new processes possible; backing and celebrating each possible path.” 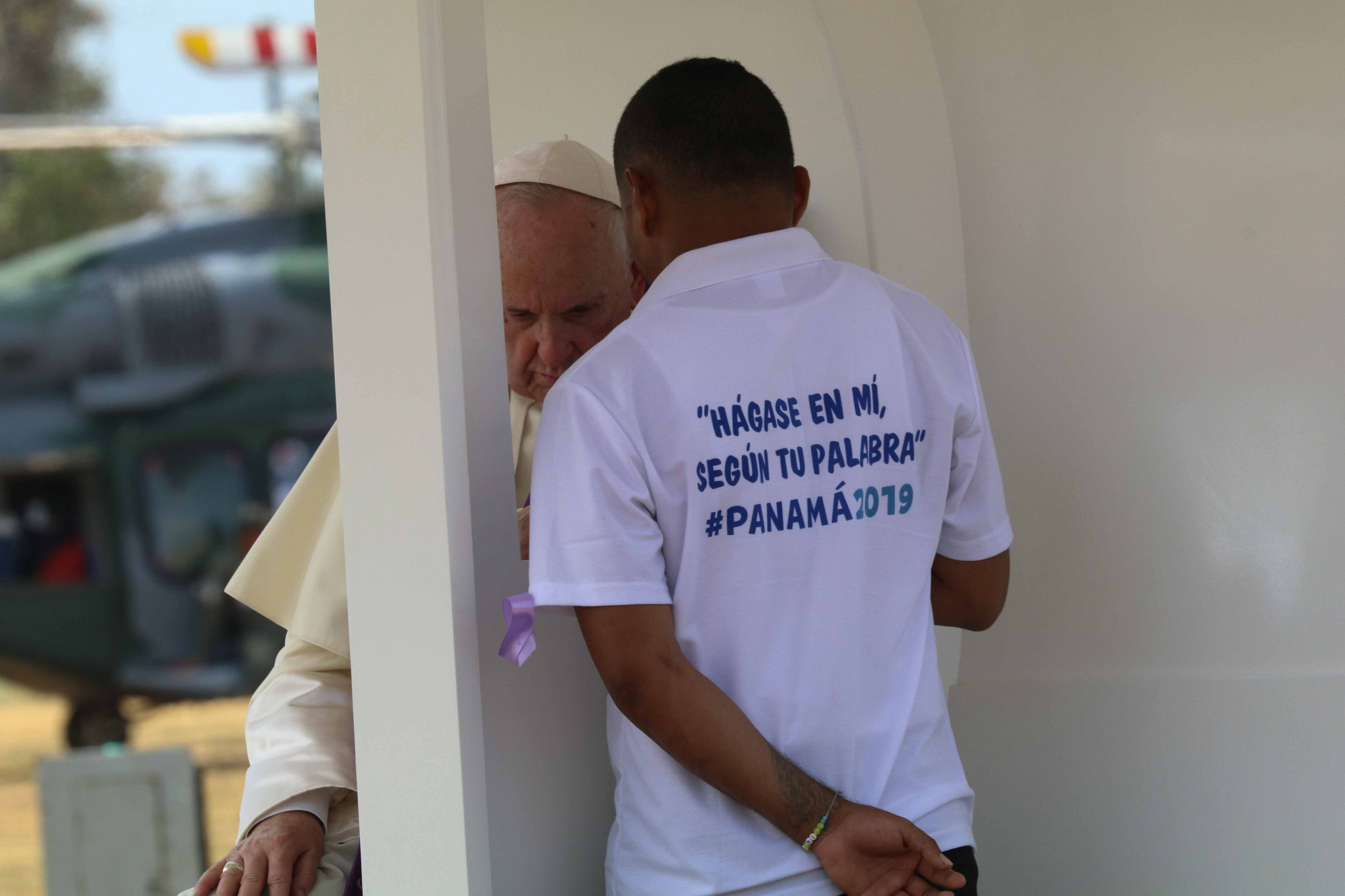 A message of encouragement: “Eleven of the twelve apostles were huge sinners, because they committed the worst of sins: they abandoned their Master, others denied him, others ran far away. The apostles betrayed him and Jesus sought them out one by one, and they changed the world. It didn’t even occur to him to say to any of them: “You can’t,” because after having seen Jesus’ love after this betrayal, they felt that “I can because you will give me the strength.”

“In this way another murmer that is not easy to detect and that “stifles dreams” because it repeats itself like a continuous whisper: “You can’t do it, you can’t do it.” The whisper that haunts those who repent of their sin and acknowledge their mistakes, but don’t think that they can change. It makes them think that those who are born publicans will always die publicans, and that is not true.

Friends: Each one of us is so much more than our labels. This is what Jesus teaches and invites us to believe. His approach challenges us to ask and seeking help when setting out on the path of improvement. There are times when complaining seems to have the upper hand but don’t believe it, don’t listen to it. Seek out and listen to the voices that encourage you to look ahead, not those that pull you down.”

Shortly we will continue with the penitential service, where we will all be able to experience the Lord’s approach, his gaze, which does not look at labels and prison terms, but at his sons and daughters. That is God’s approach, his way of seeing things, which rejects exclusion and gives us the strength to build the covenants needed to help us all to reject complaining: fraternal covenants that enable our lives to be a constant invitation to the joy of salvation,” the Holy Father concluded. The cameras were not allowed to broadcast the confessions.

The TV signal during these long minutes is significant: bars and barbed wire, but behind this is the celebration of the child that returns home…to the Father who is waiting with open arms.

Finally, 30 detainees who built the confessionals for World Youth Day said goodbye to the Pope. He received gifts made in the various workshops, among them bread baskets, including typical Argentinean bread, a painting made by a young man, a staff made in the carpentry workship, a picture of the Virgin Mary… 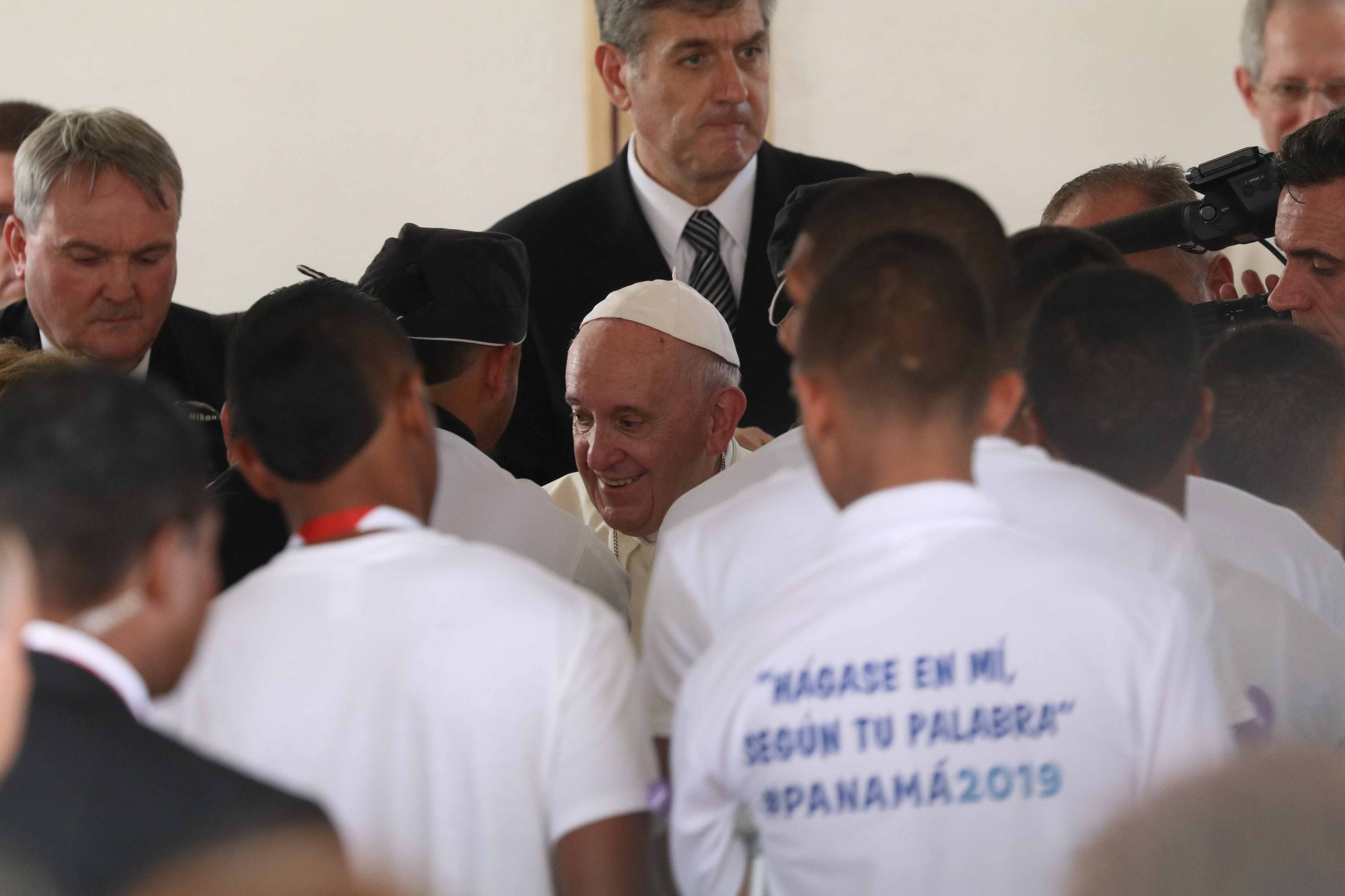 The director of “Las Garzas” explained that the young boys’ enthusiasm grew when they found out that Pope Francis would visit the detention centre: “At the beginning, it was difficult, because they thought that the Pope was only coming to talk to the Catholics, but thanks to the team, and above all, thanks to God, we were able to show the boys that the Pope was not only coming for the Catholics, but to share a message of love and hope to all young people on five continents.

Emma Alba Tejada announced that a judged granted 9 conditional releases, among them Luis…

Paolo Rufino, the prefect for the Dicastery for Communications at the Vatican, during an earlier press conference highlighted the uniqueness of the event, while Allessando Gisotti, the interim director of la Sala Stampa del Vaticano, who immediately afterwards was lucky enough to interview the Pope, highlighted Francis’ joy after one more mercy Friday. “Over the last few days we have been listening to the cry ‘This is the Pope’s youth.” These young people in prison are also the Pope’s youth in a profound way, starting with his attitude of mercy.” 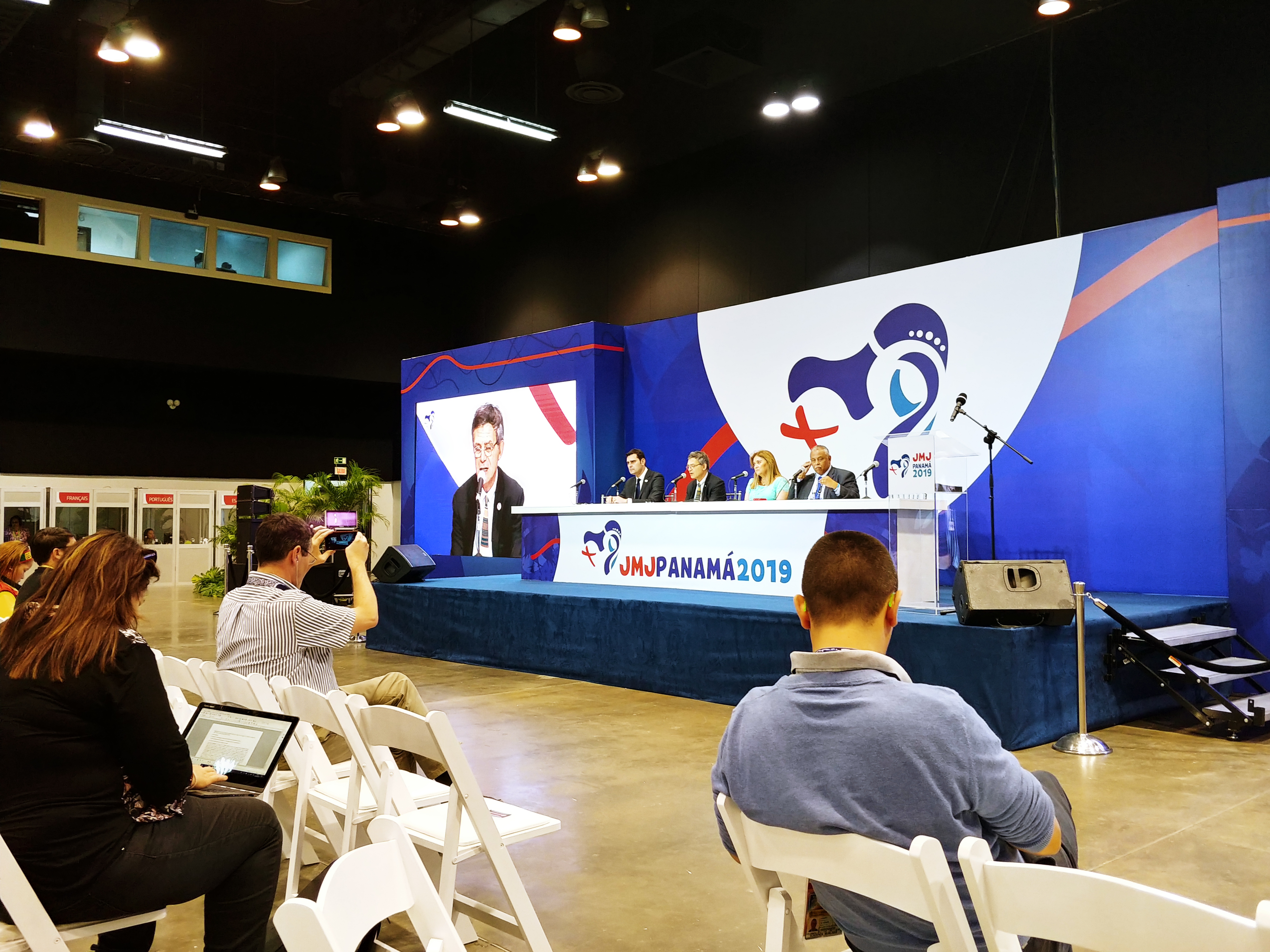