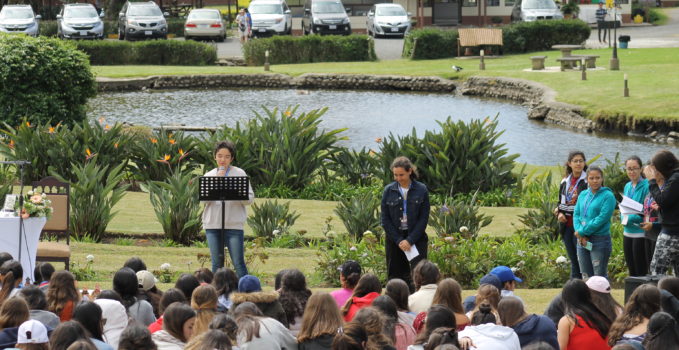 The last day of the Hinéni gathering, January 19th, was dedicated to Fr. Kentenich and his decision on 20 January 1942, when he rejected asking for a second medical examination to avoid being sent to Dachau concentration camp. The family of Catalina Cabezas and Ricardo Hutt offered their estate on a mountain near San José for this day –a green paradise full of flowers, trees, turkeys, parrots, geese, with a wayside shrine for the Blessed Mother, a chapel, a large, wooden unity cross, and lots of space for teenage girls. —

Shortly before young people’s arrival, some dark clouds appeared over the grounds, but it seemed the Blessed Mother took seriously the prayers of those preparing everything, because the sun came a little later, and left everyone, really everyone, very sunburned. 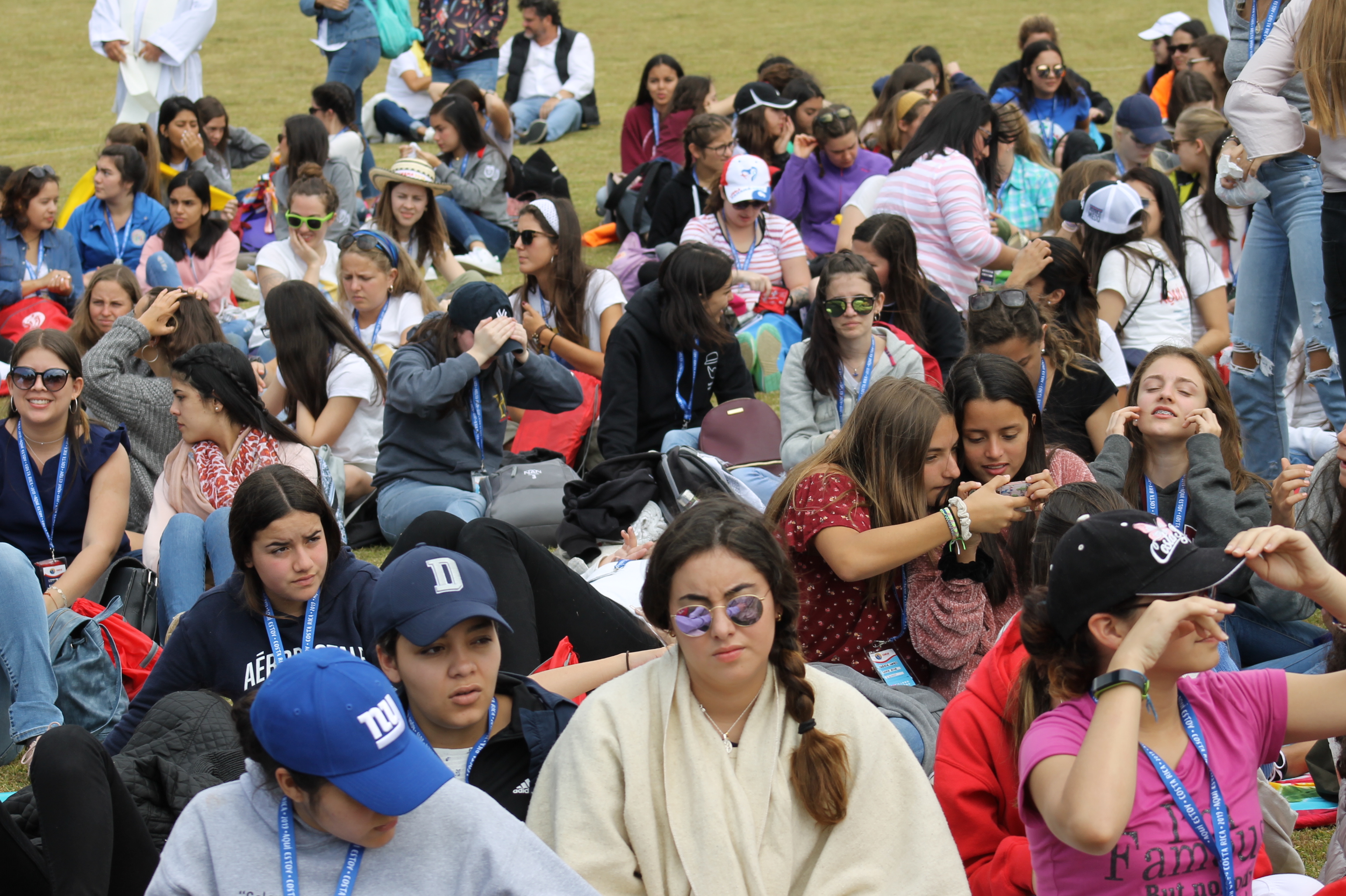 Group by group, the girls arrived and sat on the grass, looking toward the lake. Several pictures of Pilgrim Mothers were on the altar, and there was an atmosphere of peace and joy when the Mass began. In a homily translated into English and German, Fr. Martin Aversano, the National Adviser of the Girls’ Youth from Argentina, spoke to the girls about Fr. Kentenich’s decision of that January 20th, why that date is a milestone in Schoenstatt’s history, and why it is a challenge for every Schoenstatter today.

During the offertory, they took a bouquet of flowers to the altar, as a symbol of the contributions to the capital of grace and paper, which later would be used in writing personal letters for Fr. Kentenich.

After a refreshment break and introduction of new groups that had arrived late – two young men from San Juan, Argentina and girls from Santa Cruz de la Sierra, Bolivia – there was a stage play about January 20th, which was presented like a history class about Second World War heroes. The actresses were dressed like Sisters of Mary, Fr. Kentenich (with his classic beard), and the Nazis that made the history of that day visible and real. 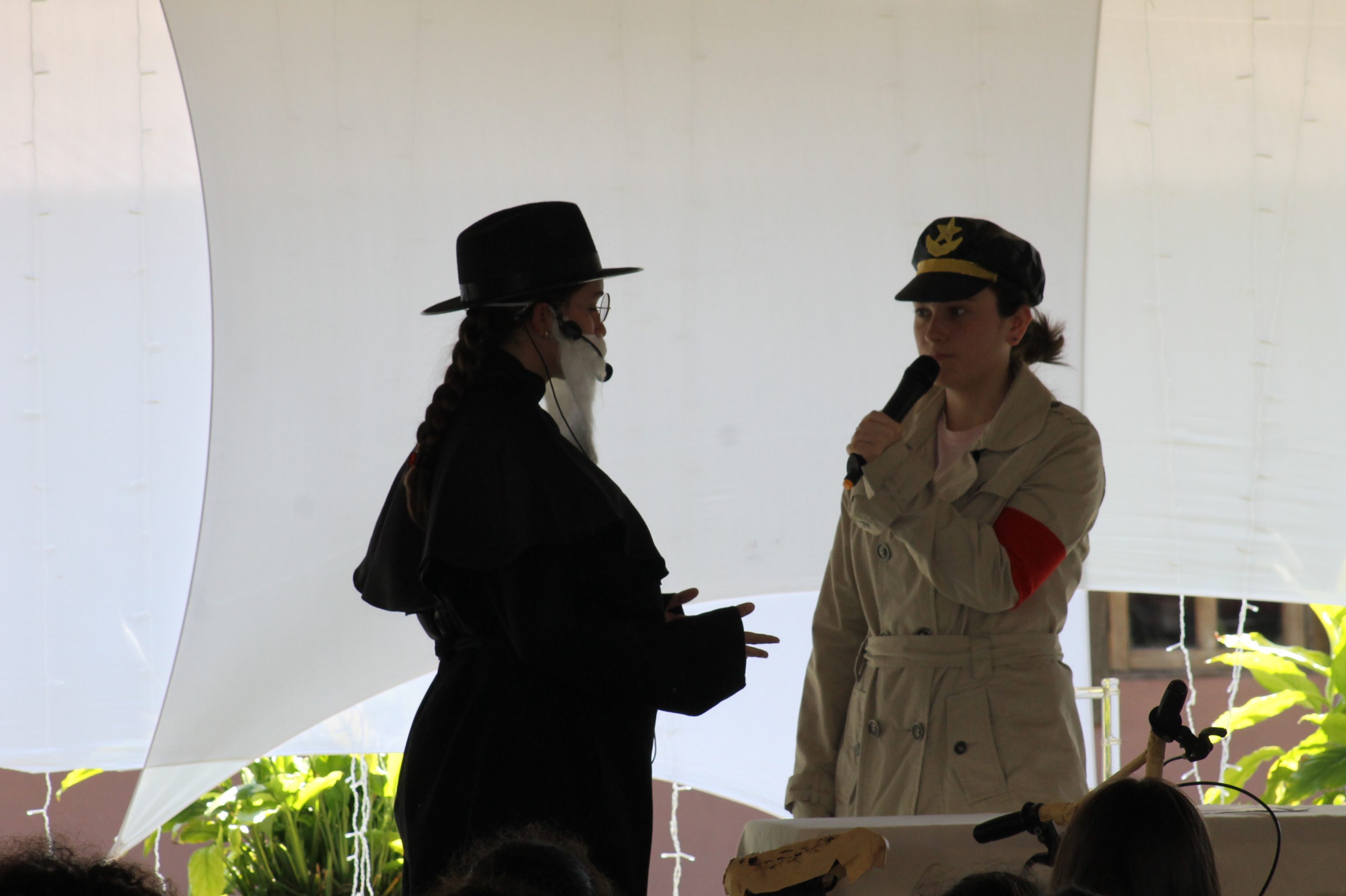 Have everyone sit down

Their great impetus to talk and reflect –combined with lunch in groups of ten youths that spread out throughout the large grounds made them think about that time in the Lord’s life, at the edge of the lake of Galilee, where before Jesus fed the multitude, he asked that: everyone sit down… An image of peace and dialogue was experienced on the beautiful grounds; it was an image of colors, smiles, and attachments. And yes, there was something of a miracle of food for a multitude. 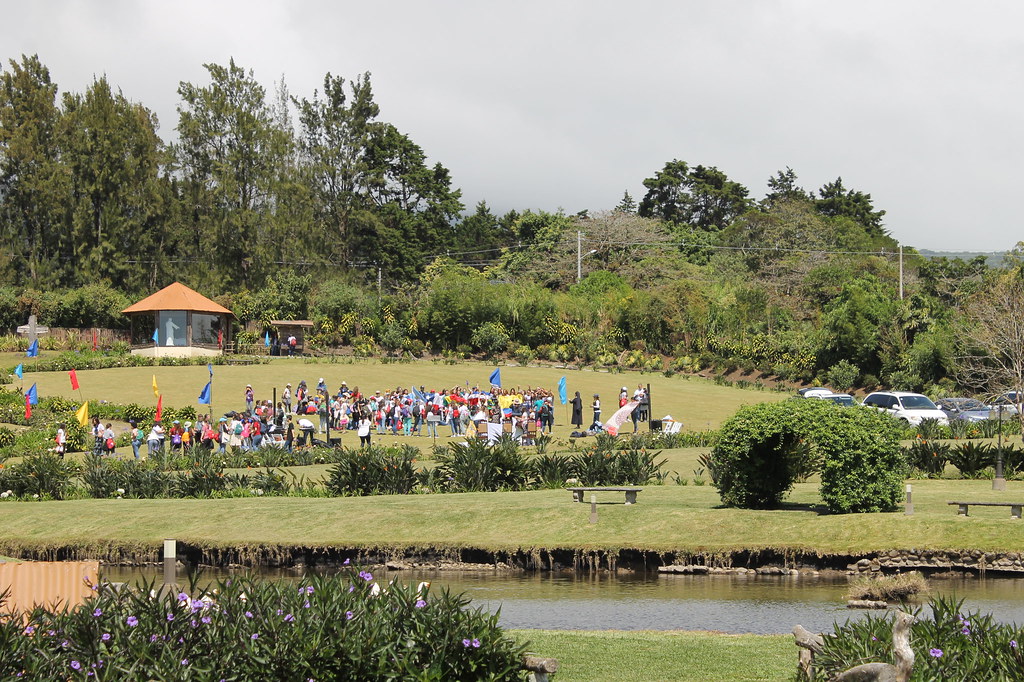 While the Hinéni participants reflected in nature, the IGNIS teenage boys met in the shrine for Mass. After this week full of emotions, graces, encounters, joys and commitments, everything was ending with a Vigil and a Cantata on the night of January 19th and the Mass of sending forth on Sunday, January 20th, celebrated in the shrine with all the Schoenstatt Family (articles coming soon).

Immediately afterwards, the young people boarded buses that took them on the twenty hour trip to Panamá…from the Central America Shrine to the recently blessed wayside shrine at San Francisco de la Caleta Parish, where a Schoenstatt Diocesan Priest, Fr. Rómulo Aguilar, and a team of Schoenstatters from the parish eagerly and joyfully waited for them. 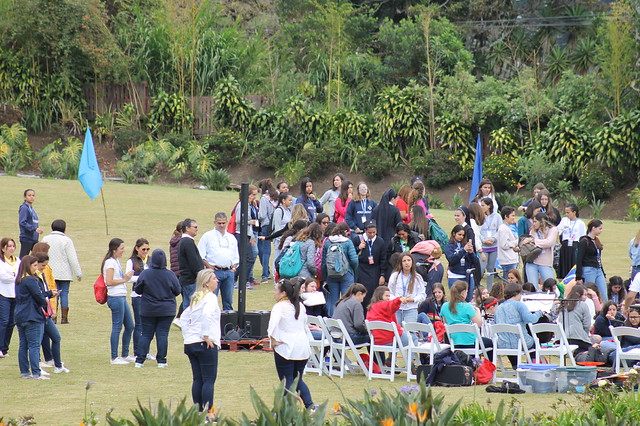