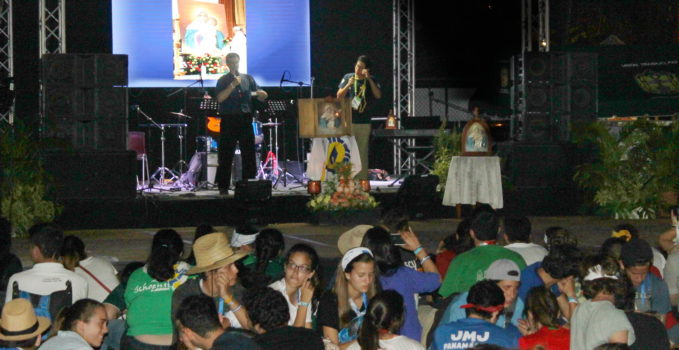 Does someone speak Spanish? Yessssss! Of course. Portuguese? Yessss! English? Yesss! Does someone speak Italian? “Yessssss!” shouted Pamela Fabiano the only Schoenstatt representative from Italy along with the Brazilians and Germans close by her that also shouted. On the night of January 23rd, the day of Pope Francis’ arrival in Panama, hundreds of Schoenstatt young people, parish neighbors, and many other people were in the square beside San Francisco de la Caleta parish for the Schoenstatt Marian Festival at WYD, to share their love for Mary through testimonies and songs.— 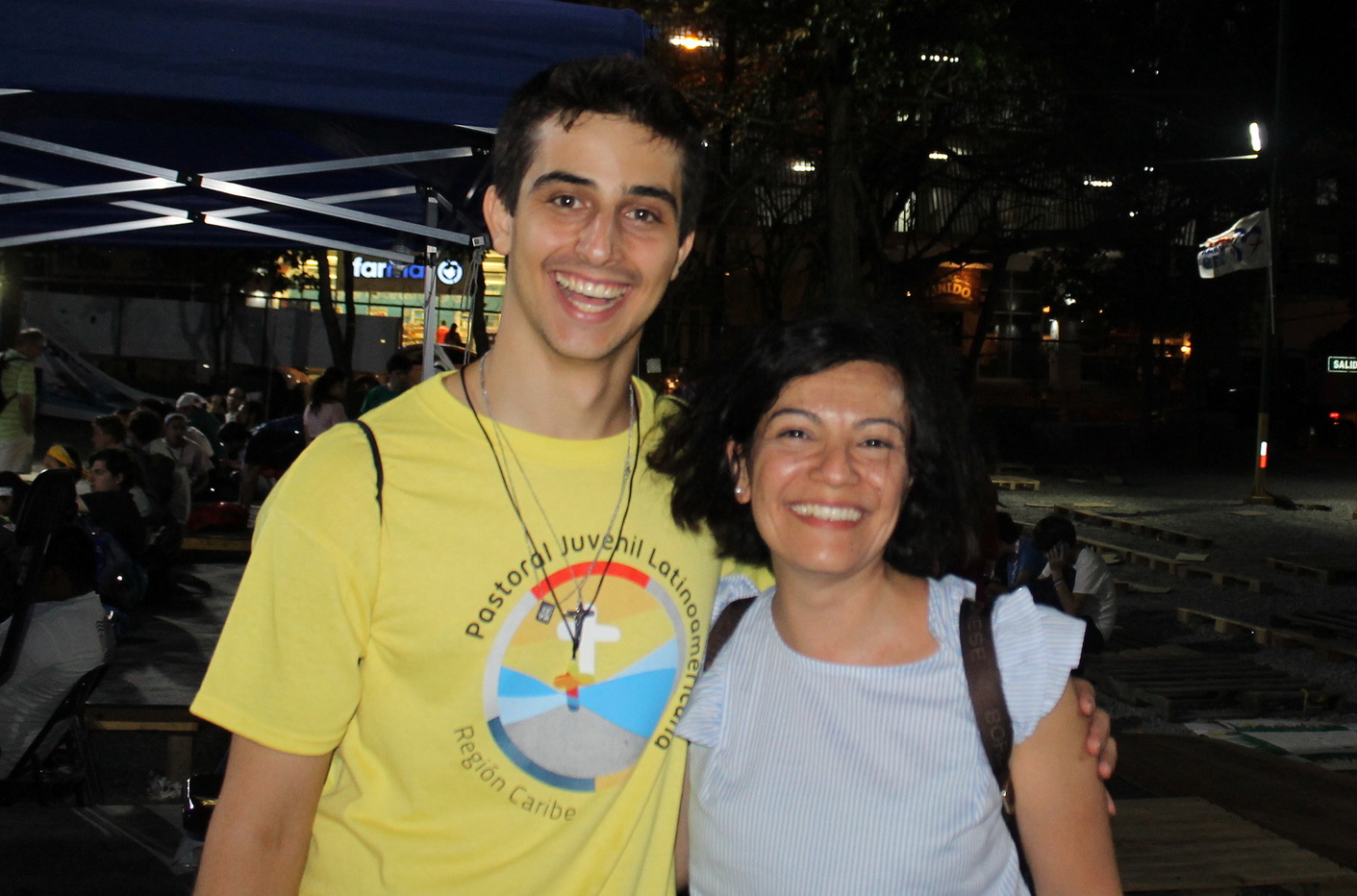 Lucas? After so many exchanges via WhatsApp and email, videos sent from the synod, interviews, and more, we could hardly believe we were seeing each other in person for the first time: Lucas Galhardo, of the Men’ s Youth from Brazil actually from Caieras, from the newest Schoenstatt shrine, was participating in WYD on behalf of the Latin American Juvenile Ministry, and he took this night to be with the Schoenstatt youth and give a testimony about what the Synod for Young People meant for him and should mean for every young person. It was a happy encounter to which Pamela Fabiano and Schoenstatters from Costa Rica and Panama quickly joined.

Fr. Alan Sosa, our Father Alan, schoenstatt.org collaborator for many years? Yes, it was he; a little older and now he is not organizing massive adolescent pilgrimages to Juana Kosley wayside shrine near San Luis. However he is preparing for the material and spiritual conquest of the San Luis shrine in Argentina. He came with some of the youths from his diocese that enjoyed the festival very much – and we agreed to resume contact so that the news from San Luis will go out to the world

José Alejandro? Are you here? “Yes,” he answered laughingly. “Sunday, after the Mass for sending forth young people from the shrine in Costa Rica to WYD in Panama, we decided with the whole family to do a crazy thing and travel to Panama.”

Three encounters of many that took place on that night filled with music and testimonies, in the shadow of the wayside shrine, encounters that weave bonds and make “Connecting Schoenstatters”, schoenstatt.org’s mission,  be more than just communities in social media but a  human community,  as Pope Francis says in is message for World Day of Social Communications 2019, published this January 24th. 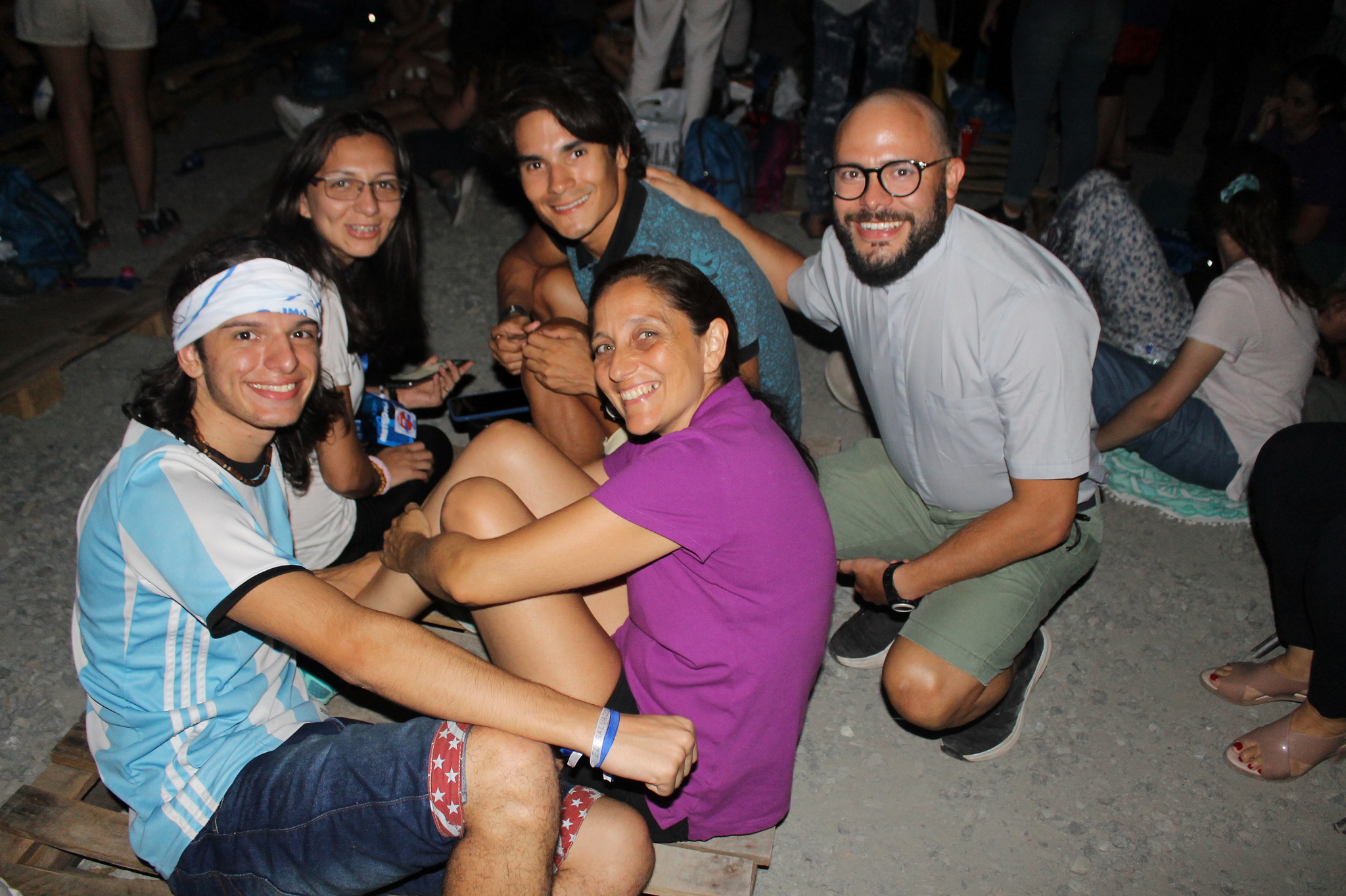 With Jorge Rincón and Fr. Santiago Cacavelos, from Paraguay in leading roles, a night of music developed, a cantata to the Blessed Mother that was pure evangelization through music. There were meditative songs, that led to reflection and prayer, there were songs still somewhat unknown, and there were those that made all the young people with heart sing, dance, wave flags and Pilgrim Mothers: “Soy misionero”, by Fr. Manu López Naón, for example, or “La de siempre.”

Three testimonies were always presented in-between prayers and music. Rachel, a young girl from the United States, related very personally in Spanish and in English (and a little long because of the great emotion) how she discovered her vocation for the Institute of Schoenstatt Ladies.

Fr. Alexandre Awi, secretary of the Dicastery for Laity, Family and Life shared about some of his experiences with Pope Francis when he was his translator (and more) during the World Youth Day 2013 in Rio de Janeiro, Pope Francis’ first WYD. He related how, in the first shared meals, he noticed the Pope said the prayer “nos cum prole pia,” which is used a lot in Schoenstatt. After a few days, he asked: “Holy Father, where did you learn it?”  To which the Pope with his typical sincerity, answered: “I don’t remember…” Another was a moment after an encounter with ten young men deprived of freedom, when Fr. Alexandre joyfully told him that eight of them would be liberated. Instead of showing joy, with obvious sadness, he asked him: “What happened with the other two?” He ended with a well-known story of how in WYD Rio he gave the Pope a Pilgrim Mother, that he still has on his bedside table and which he prays top everyday (More in: Fr. Alexandre Awi, She is my mother, Editorial Patris Argentina). 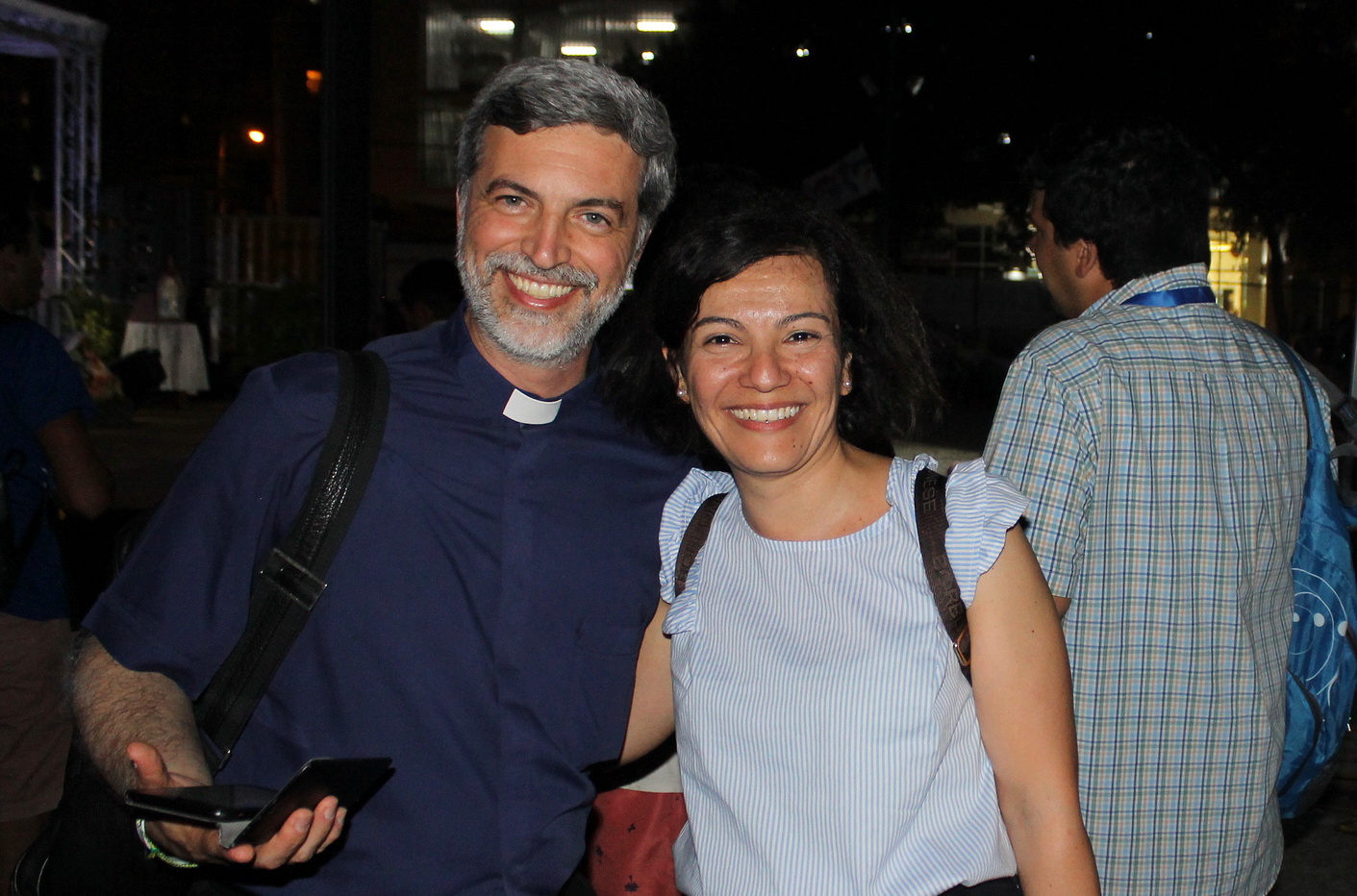 “I am very sorry, that at the end, the synod was not very present in the Church and in Schoenstatt either, despite the great work that was done, even in schoenstatt.org,” he commented. “Surely the Pope will speak about the Synod, of the great subjects that were discussed, and that are important for the Church, because they are something that concerns the Pope very much.”

He emphasized three points in his testimony: to listen, to discern, to walk together (synodality). Attitudes that we really should make our own. And now after two days of WYD with the Pope, we know it: he does speak about this. He speaks about listening, discerning, and especially about walking together in fraternal covenants, in solidarity. 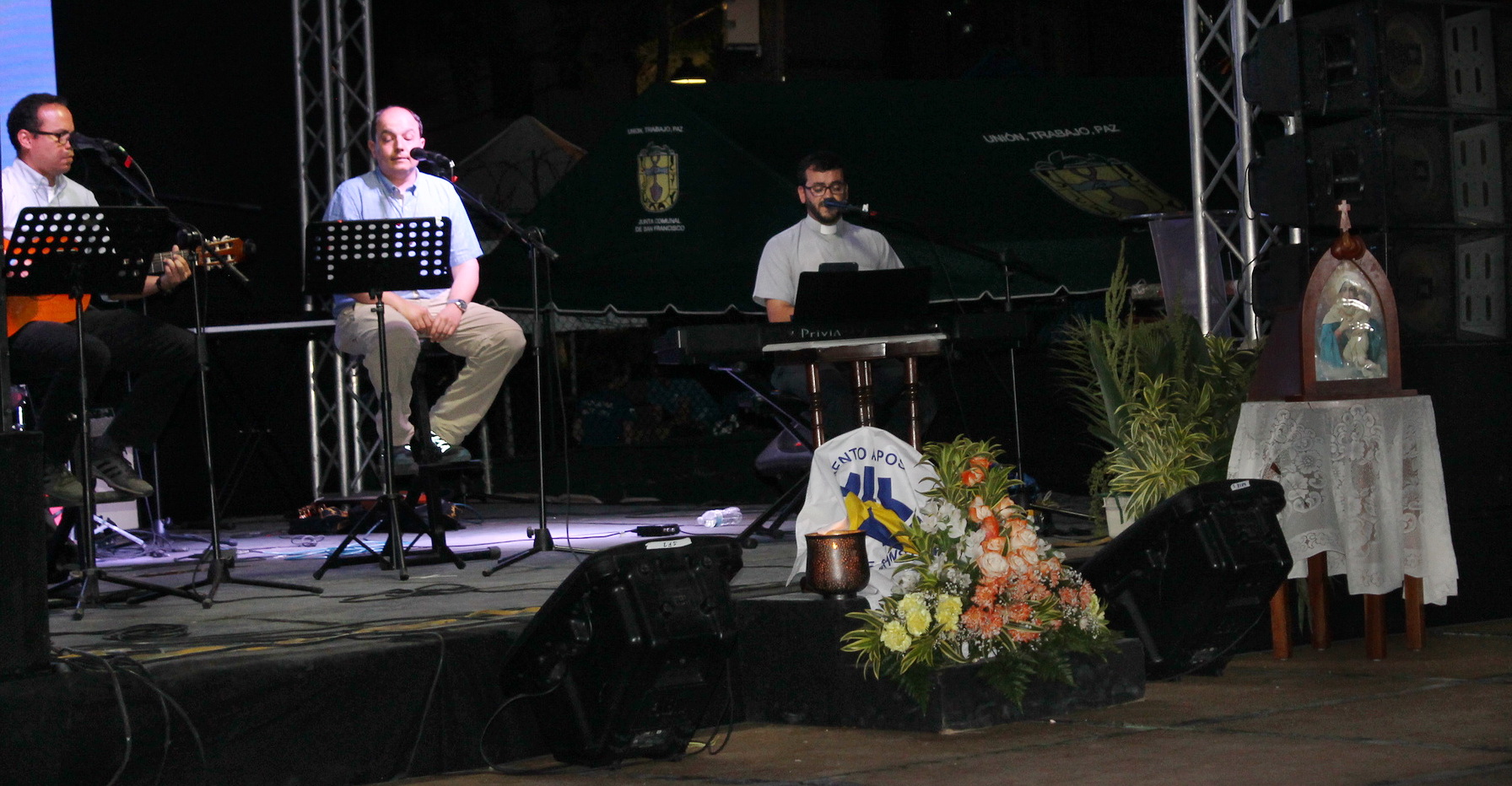 The festival began with a Mass in San Francisco de la Caleta Church, and ended, as it should be, with prayer, consecration to the Blessed Mother, and a blessing of the priests who were present.