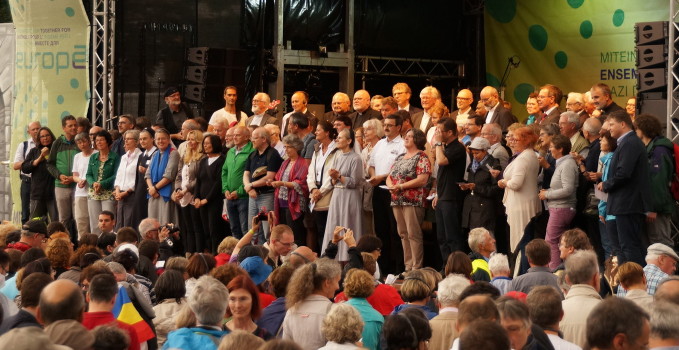 Reconciliation opens up the Future

“We won’t be able to separate these Christians again, they belong together.” Not only Cardinal Reinard Marx showed that he was moved by the atmosphere among the five thousand present at the final rally of “Together for Europe” in Munich. After two days with a filled programme in Circus Krone, the Christians from two hundred communities and Movements from thirty-two countries wanted to offer a public sign of reconciliation and togetherness of the confessions. “Your togetherness is a force for cohesion and has a clear goal: to apply the basic values of Christianity through practical answers to the challenges of a continent in crisis”, Pope Francis said in a video message.

It is possible that there has never been a greater need to be united and act in solidarity, Patriarch Bartholomew I of Constantinople added, also in a video message. This applies both to Europe and on a global level. Christians are called upon to testify to the fundamental principle of the Church: the community.

Lutheran Bishop Heinrich Bedford-Strohm commented in view of this audience, “I don’t have to give a message of unity, that unity is there before me.”

Metropolitan Serafin Joanta, Cardinal Kurt Koch and Lutheran Bishop Otfried July spoke about their joys, sufferings and hopes in working for ecumenism. In a prayer which they read out together they asked for forgiveness, for new ways of togetherness, and embraced one another as a sign of reconciliation.

However, “Together for Europe” not only wants to bring Christians closer to one another, they also want to make an active contribution together in society. Maria Voce, President of the Focolare Movement, asked, “Is unity a dream, a utopia? No, it is our experience. God’s love unites us; it has opened our eyes and hearts to embrace the fears, the tears and hopes of this continent.” And Marco Impagliazzo, President of the Sant’Egidio Movement, called for commitment, so that this does not remain “a Europe of the fathers, but also becomes a Europe for our children.”

The prayers in Arabic sung by Wajd Asmar, a seventeen-year-old Christian from Syria, touched all hearts and reminded everyone of Europe’s worldwide responsibility.

After each contribution a plank across a large “Gate into the Future” on the stage was removed, until it could be fully opened with the “Key of Providence”. At the end each participant was given a symbolic key to take home. Sergej Altuchov from Russia, whose testimony about the reconciliation between Russians and Germans impressed everyone, said at the end that he would take this key of reconciliation to his President, Vladimir Putin.

In the common concluding messaged the initiators invited those present to strengthen their commitment as Christians in Europe. The called for “a culture of respect and appreciation of others, including strangers”, and also encouraged “those in responsible positions in the Churches to overcome separation”.

Finally the festival continued on the Stachus with music and inspirations well into the evening.