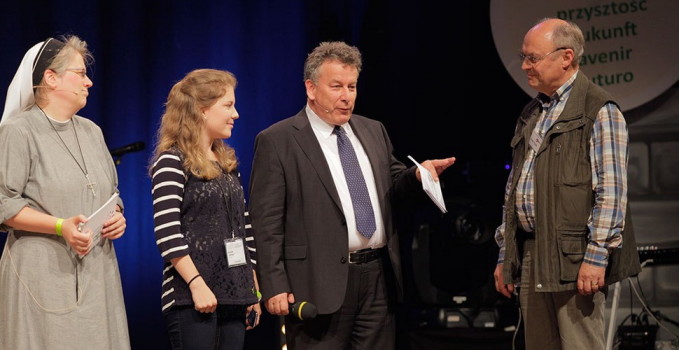 I am proud to be a European

While she was reading the Sacred Scriptures, Salomy thought of her experiences on this second day of the Congress “Together for Europe”. She had read an exciting story from the Old Testament, in this case, that of Elias who maintained that if you only pray ardently and trustingly enough to God for rain, this God would hear him and let it rain. … After a nerve-racking wait a tiny little cloud appeared on the horizon, and from it strong rain would soon fall. This little cloud is the Congress of “Together for Europe”, of this the young woman was certain, and although it might seem insignificant, a heavy rain of grace would fall on Europe. When she told Sr Nocle Grochowina about it, she was immediately asked to pass it on to all present . The warm applause spoke for itself. The closing of the Congress was marked by hope and joy, by praise and prayer, by elements of music, dancing and pantomime, more by gestures and less by words. 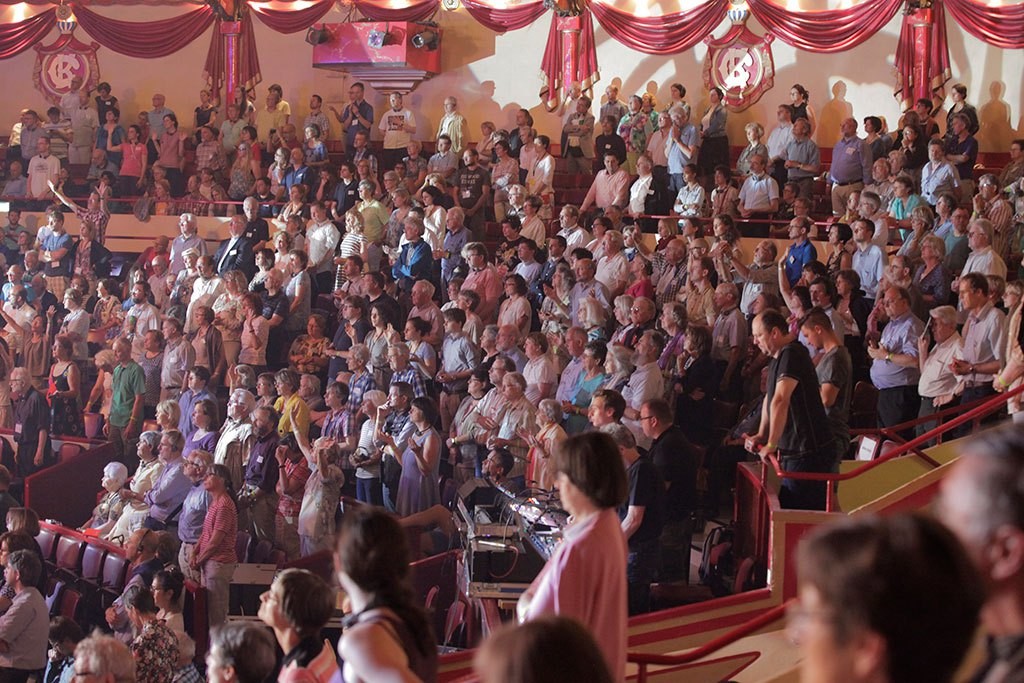 The refreshingly simple arrangement of the stage contrasted with the red and gold of the circus house. This, too, was a message. When Andrea and Albert Frey, the band and dancers that depicted Mary’s Magnificat in praise of God, took their places in the circus ring, also this became a gesture and message: All are in some way collaborators; not just stars and their public were there, they were simply Christians who prayed and thanked together, and together surged ahead – together and for Europe. Words of thanks to the translators or the sound technology and technicians sounded sincere; gestures of friendship like that of a collaborator in Catering who quickly rustled up something to eat for a tardy journalist, or the handshake of a working journalist who smiled as she found time for an elderly gentleman who urgently needed to charge his mobile phone, and turned to the press office to do so … 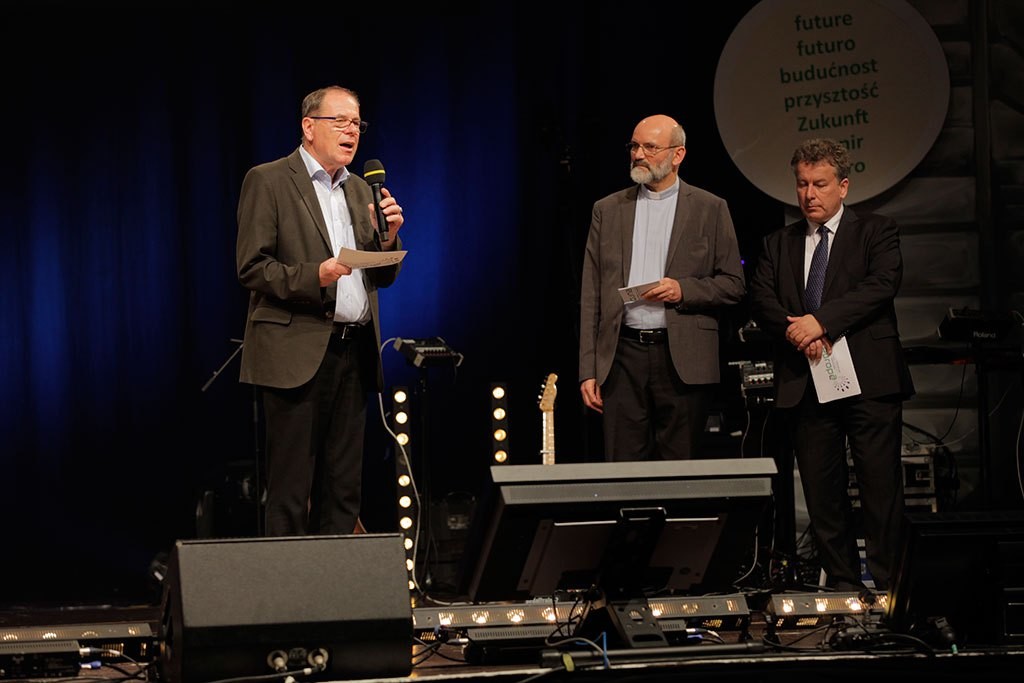 That is together for Europe that was coming to a close on 1 July as the evening drew on. What was this Congress like, what are the next steps, what perspectives were opened up? Henning Dobers of Geistliche Gemeindeerneurung (spiritual renewal of communities), Gerhard Pross (CVJM) Esslingen; Cardinal Kurt Koch, Rome; Christophe d’Aloisio, Belgium; Diego Goller, Rocca di Papa (Focolare Movement; Fr Heinrich Walter, Rome (Schoenstatt), Gerhard Kehl, Jordan Trust, Kempten and Stefan Nicklas, CVJM Munich. For Gerhard Pross it was the experience of an actually existing union that was the strongest feature of this Congress – he mentioned the testimony of Cardinal Kasper, Cardinal Marx and Bishop Bedfprd-Stohm. “We bear within ourselves the name of the new vision, and may courageously pass it on”, was his message. Terrorist attacks in the heart of Europe, or Brexit immediately before the Congress, are prophetic voices that challenge us to commit ourselves to Europe.

Fr Heinrich Walter point to the sound, slow growth from within that marks the process of togetherness for Europe and the commission “to bear fruit”. 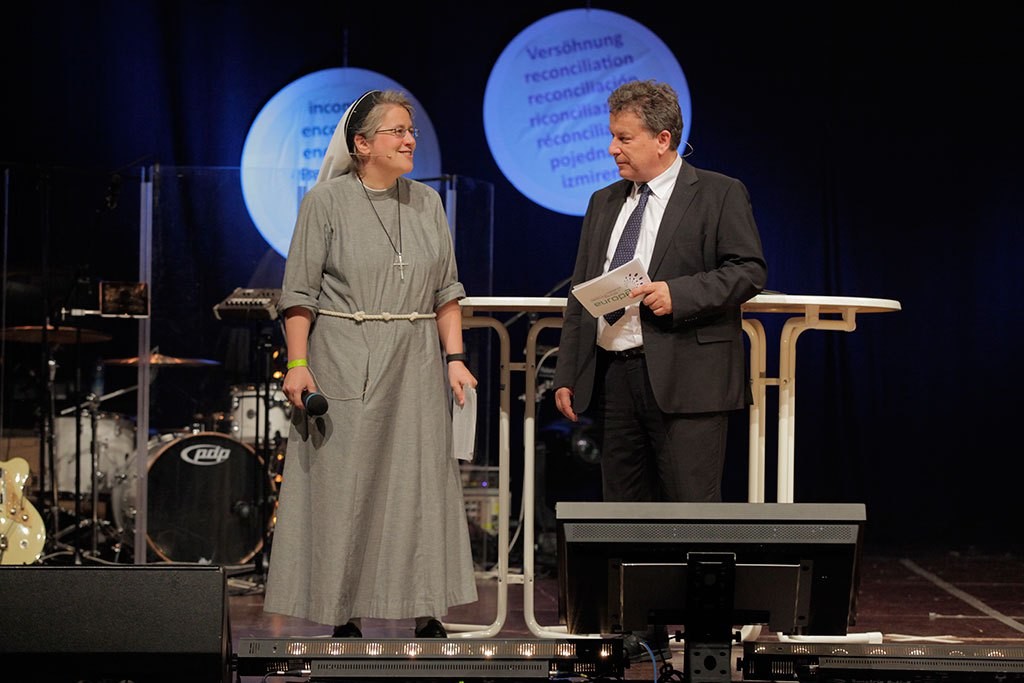 I am proud to be a European. “So am I”, someone said to the person sitting beside him. “So am I”. 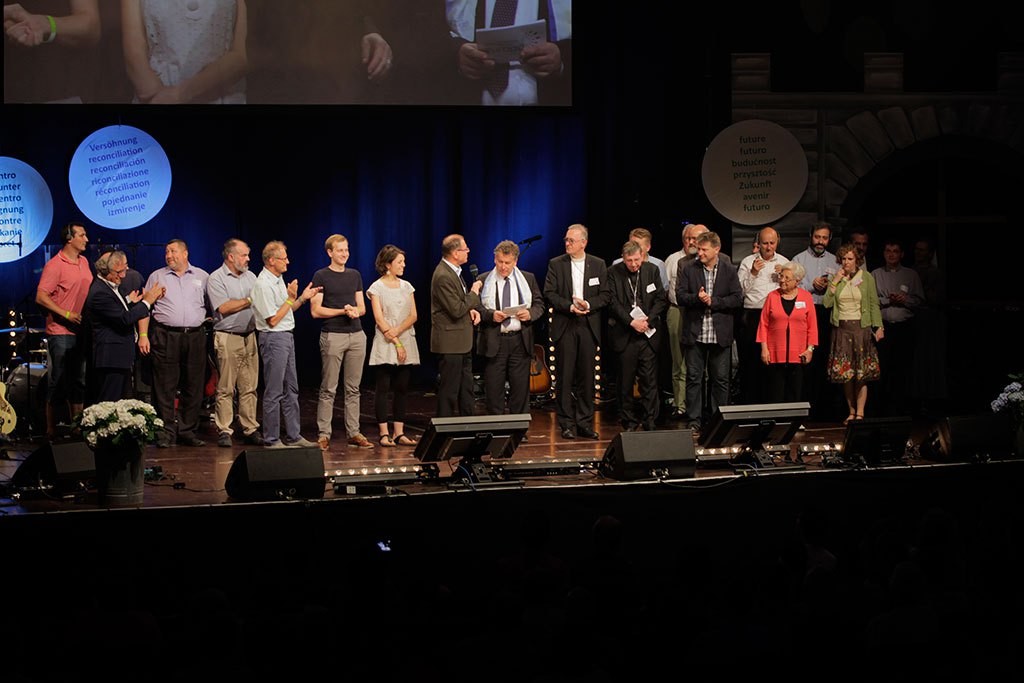