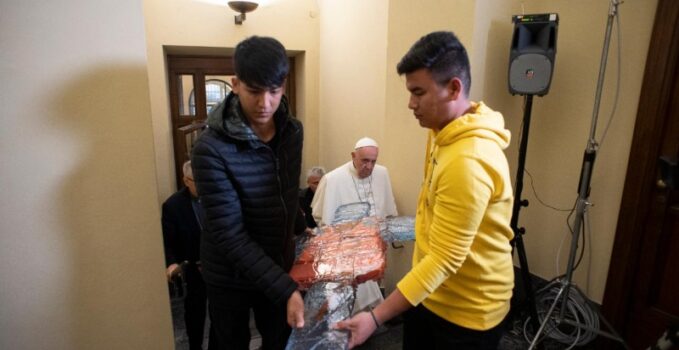 At the end of the audiences on December 19, a few days from Christmas, the Holy Father Francis met with refugees recently arrived from Lesbos via humanitarian corridors and had a cross placed at the entrance of the Apostolic Palace from the Courtyard of the Belvedere in memory of migrants and refugees.—

The transparent cross was hung inside an entrance to the apostolic palace reached from the Belvedere Courtyard – where diplomats and heads of state arrive for audiences with the pope.

After hanging the migrant cross on the wall Dec. 19, Pope Francis greeted around 40 asylum seekers who arrived in Italy from the Greek island of Lesbos earlier this month.

The asylum seekers are from Afghanistan, Togo, and Cameroon. They will be supported by the Holy See through the Office of Papal Charities and by the Sant’Egidio Community, a lay Catholic movement centered on peace and helping the poor.

On his Twitter and Instagram accounts, Pope Francis wrote: I decided to place this life jacket – which belonged to a migrant who died at sea – upon this cross to remind everyone of the essential task of saving every human life, a moral duty that unites believers and non-believers. We must help and save others, because we are all responsible for our neighbor’s life, and the Lord will require of us a reckoning at the hour of judgment. 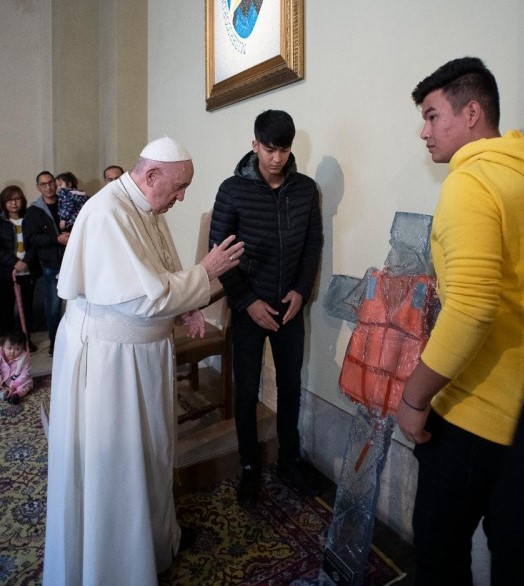 The following is the Pope’s address to those present:

Address of the Holy Father 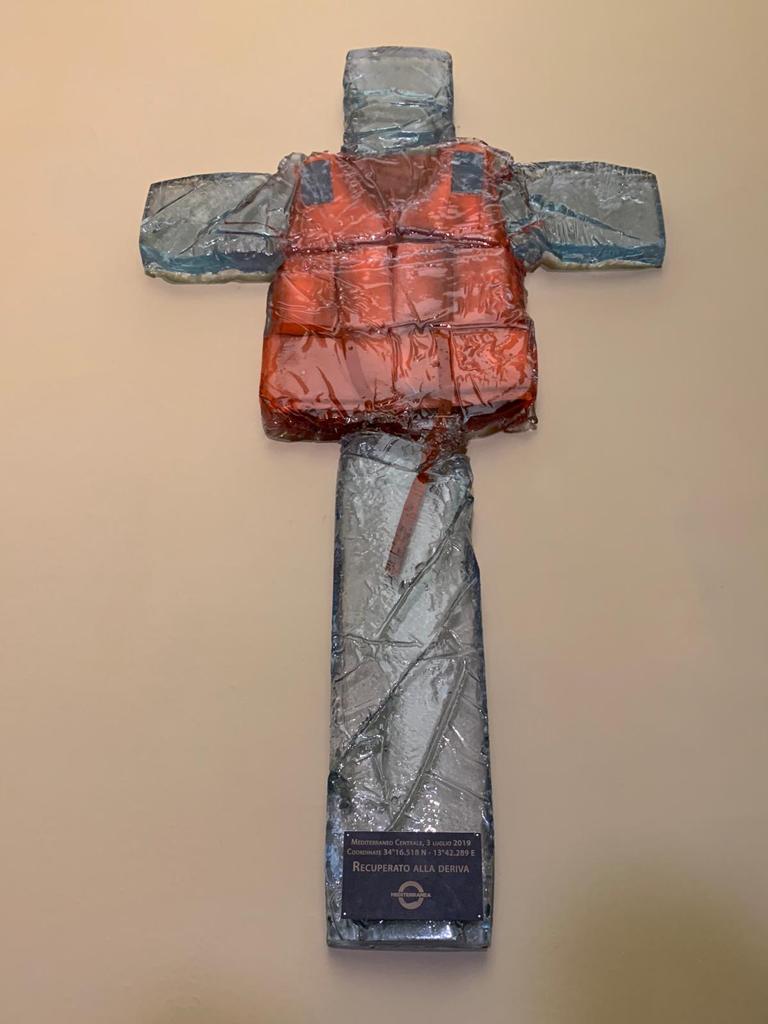 This is the second life jacket I have received as a gift. The first one was given to me a few years ago by a group of rescue workers. It belonged to a little girl who drowned in the Mediterranean. I then donated it to the two under-secretaries of the Section for Migrants and Refugees of the Department for Promoting Integral Human Development. I said to them, “Here is our mission”. With this I wanted to signify the essential commitment of the Church to saving the lives of migrants, to be able to welcome, protect, promote and integrate them.

This second vest, delivered by another group of rescuers only a few days ago, belonged to a migrant who disappeared at sea last July. No one knows who he was or where he came from. It is only known that his vest was recovered adrift in the Central Mediterranean, on 3 July 2019, at certain geographical coordinates. We face another death caused by injustice. Yes, because it is injustice that forces many migrants to leave their lands. It is injustice that forces them to cross deserts and suffer abuse and torture in detention camps. It is the injustice that repels them and causes them to die at sea.

The vest “worn” by the cross is made of coloured resin, and is meant to express the spiritual experience I was able to grasp from the words of the rescuers. In Jesus Christ the cross is the source of salvation, “foolishness for those who are lost” says Saint Paul, “but for those who are saved, that is, for us, it is the power of God” (1 Cor 1: 18). In the Christian tradition the cross is a symbol of suffering and sacrifice and, at the same time, of redemption and salvation.

This cross is transparent: it is a challenge to look more carefully and always seek the truth. The Cross is luminescent: it is intended to strengthen our faith in the Resurrection, Christ’s triumph over death. Even the unknown migrant, who died with the hope of a new life, shares in this victory. The rescuers have told me how they are learning humanity from the people they manage to save. They revealed to me how in every mission they rediscover the beauty of being one great human family, united in universal brotherhood.

I decided to display here this life jacket, “crucified” on this cross, to remind us that we must keep our eyes open, keep our hearts open, to remind everyone of the imperative commitment to save every human life, a moral duty that unites believers and non-believers.

How can we fail to listen to the desperate cry of so many brothers and sisters who prefer to face a stormy sea rather than die slowly in Libyan detention camps, places of torture and vile slavery? How can we remain indifferent to the abuse and violence of which they are innocent victims, leaving them at the mercy of unscrupulous traffickers? How can we “pass by”, like the priest and Levite in the parable of the Good Samaritan (cf. Lk 10: 31-32), thereby making ourselves responsible for their deaths? Our sloth is a sin!

I thank the Lord for all those who have decided not to remain indifferent and who do their best to help the unfortunate, without asking too many questions about how or why the poor dead man ended up in their way. It is not by blocking their boats that the problem is solved. We must make a serious commitment to emptying the detention camps in Libya, evaluating and implementing all possible solutions. We must denounce and prosecute the traffickers who exploit and mistreat migrants, without fear of revealing connivance and complicity with the institutions. Economic interests must be set aside so that at the centre is the person, every person, whose life and dignity are precious in the eyes of God. We must help and save, because we are all responsible for the life of our neighbour, and the Lord will ask us to account for this at the moment of judgment. Thank you.

May the Lord bless you all.