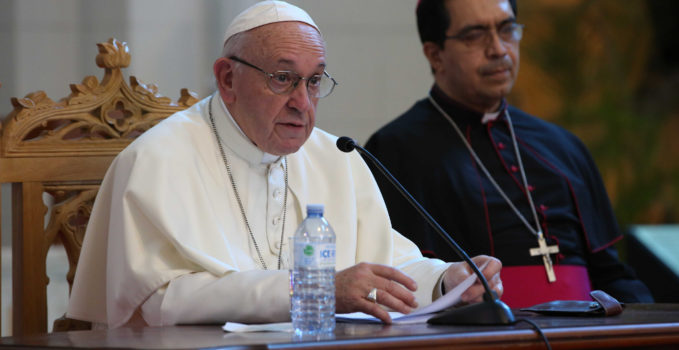 “I just heard the Pope’s words to the bishops in Central America. These are words for us to reread, pray, and discover the message in order to bring it to life. Not only for the religious but also for lay people who play any pastoral role,” commented Ana María Ghiggi from the Schoenstatt.org team after the live transmission of Pope Francis’ meeting on 24 January. We share the messages here so that we can read, pray, and discover and bring Pope Francis’ messages from 24 January in Panama to life.

“Sustainability born of the ability to create bonds and alliances”

After a courtesy visit to the President of the Republic, Juan Carlos Varela Rodríguez and the First Lady, Lorena Castillo at Palacio e las Garzas, Pope Francis met at 10:40 at Palacio Bolivar, the headquarters of the Foreign Affairs Ministry, with the national authorities, representatives of the three arms of government (Executive, Legislative and Judicial), as well as members of the Diplomatic Corps, religious leaders, key figures from the social, economic, political, cultural, educational sectors and other invited guests.

Thanks to its privileged location, your country is a strategic enclave not only for the region but also for the entire world. A bridge between oceans and a natural land of encounter, Panama, the narrowest country of the entire American continent, is the symbol of the sustainability born of the ability to create bonds and alliances. This capacity shapes the heart of the Panamanian people.

Complete text of his message to the National Authorities

“Thinking with the church”

After the meeting with the authorities, the diplomatic corps and civil society representatives, the Pope went to the St. Francis of Assis Church to participate in the meeting with the bishops of the SEDAC.
Upon his arrival, the Holy Father was received by the Archbishop of Panama, José Domingo Ulloa Mendieta, and the president of the Secretariat of the Central American Bishops Conference (SEDAC), Mons. José Luis Escobar Alas. On behalf of the SEDAC, Mons. Escobar Alas, addressed the welcome greeting to the Holy Father. After this, the Holy Father read a message to the bishops.
His Holiness’ meeting with the central American bishops ended with a fraternal greeting and an official photograph.

“The Pope’s speech to the Central American bishops, interwoven with quotations from St. Oscar Romero, offers clues to understand the Message for the World Day of Communications and the meeting for the protection of minors,” explained Andrea Tornielli, Director of the Editorial Board of the Dicastery for Communication. “Thinking with the Church” was the episcopal motto of St. Oscar Arnulfo Romero, the archbishop of San Salvador who was martyred by a death squad while he celebrated the mass on the altar. This is the thread that runs through Pope Francis’ address to the Central American bishops in the St. Francis of Assisi Church in Panama City, during his first day of public commitments of his trip for WYD 2019. Once again the Pope drew up a profile of the pastor, offering clues to read the current situation of the Church.”

Among these prophetic fruits of the Church in Central America, I am happy to mention Saint Oscar Romero, whom I recently had the privilege of canonizing during the Synod on Young People. His life and his teachings remain a source of inspiration for our Churches and, in a special way, for us as bishops.
His episcopal motto, inscribed on his tombstone, clearly expresses the principle that guided his life as a pastor: to think with the Church. It was the compass for his life and fidelity, even in times of great turmoil.

Full text – message to the bishops

Finally, the Pope met with the young people during the welcome ceremony and opening of the WYD at Campo Santa Maria la Antigua – Cinta Costera, where some 350,000 people were in attendance, according to information by St. Michael’s Interagency Joint Task Force (FTC). Once again, the Pope changed the protocol because he arrived in an open Popemobile instead of the expected closed car.
The event began with the greeting by Bishop José Domingo Ulloa Mendieta, the Archbishop of Panama, to the Holy Father.

Departing from the prepared text several times, the Pope recalled the Youth Synod and encouraged the youth to live and build a culture of encounter, also with those “who are not just like us,” and to have the courage to listen to the call of God like Mary did, and in the words of the WYD official song: “I am the servant of the Lord, may it be done to me according to your word.

With you, we want to rediscover and reawaken the Church’s constant freshness and youth, opening ourselves to a new Pentecost (cf. Synod on Young People, final document, 60) As we experienced at the Synod, this can only happen if, by our listening and sharing, we encourage each other to keep walking and to bear witness by proclaiming the Lord through service to our brothers and sisters, and concrete service at that.

Full text – Message to the youth 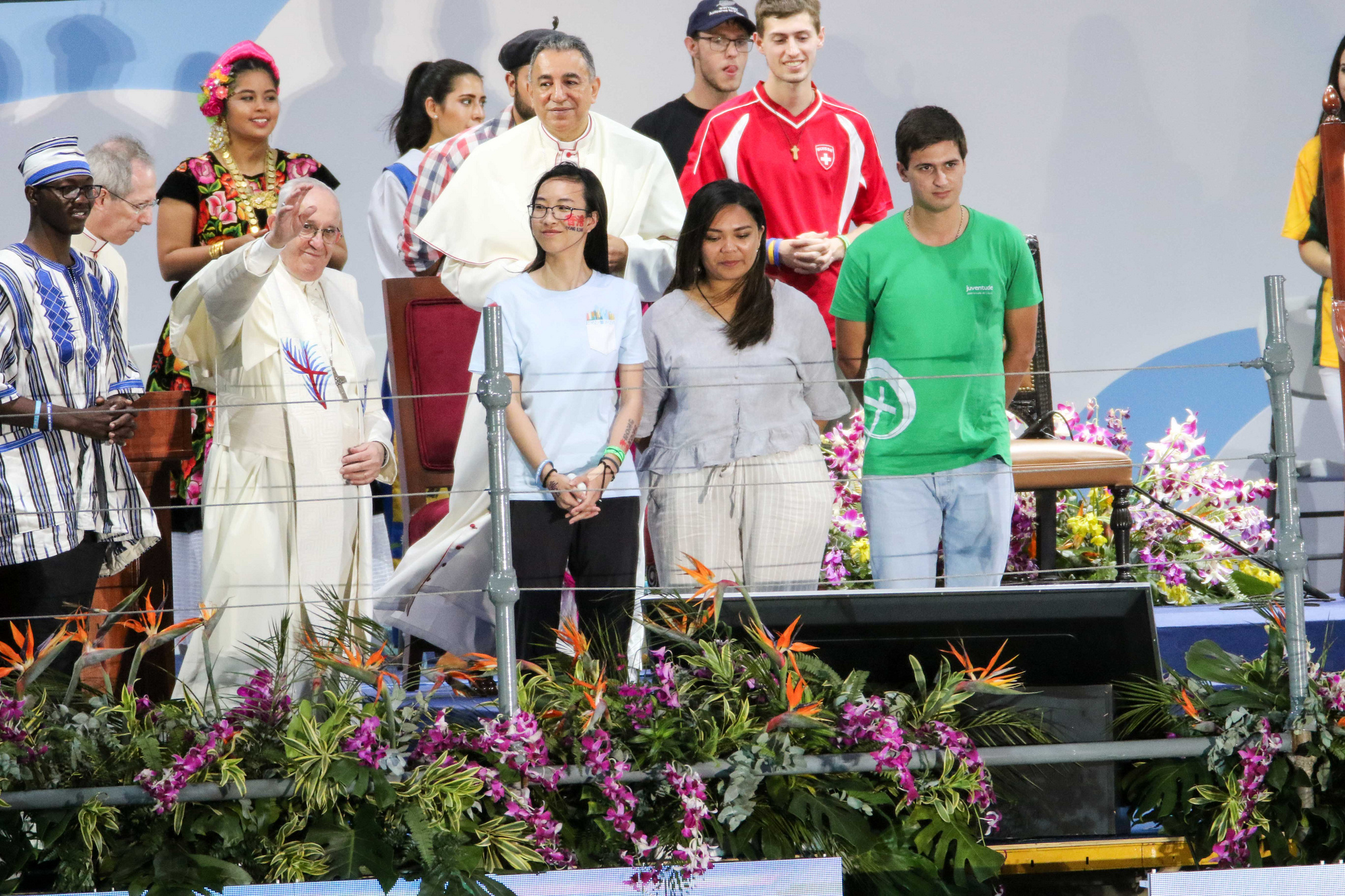