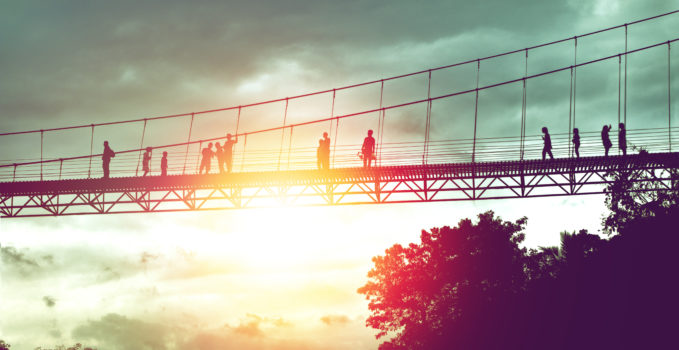 A historic moment for the Church: building bridges instead of walls

It is a historic moment for the universal Church. It puts to an end the two Catholic churches in China that co-existed up until now: the official and the clandestine churches. In return, Beijing recognizes the Pope as the Church’s only head. Bridges instead of walls. Faith changes history. —

Vatican Secretary of State, Pietro Parolin, the architect and advocate of the agreement, explained its substance in a video message. “And today, for the first time all the Bishops in China are in communion with the Bishop of Rome, with the Successor of Peter. […]What is required now is unity, is trust and a new impetus; to have good Pastors, recognized by the Successor of Peter – by the Pope – and by the legitimate civil Authorities.

Pope Francis in his General Audience on 26 September said:
“Dear brothers and sisters, on Saturday 22 September, the People’s Republic of China and the Holy See signed a Provisional Agreement in Beijing about the appointment of bishops in China.
The Agreement is the fruit of a long and measured path of dialogue, aimed at fostering a more positive collaboration between the Holy See and the Chinese authorities, for the good of the Catholic community in China and for harmony throughout society.
In this spirit, I decied to send a message of brotherly encouragement to the Chinese Catholics and the universal Church, which will be published today.
With it, I hope that it can begin a new phase in China that will help to heal the wounds of the past, to re-establish and maintain full communion with all of the Chinese Catholics and to take up a renewed commitment to proclaim the Gospel.
Dear brothers and sisters, we have an important task! We are called to accompany our brothers and sisters in China with fervent prayer and fraternal friendship. They know that they are not alone. The whole Church with them and for them. We ask the Blessed Mother, Mother of Hope and Help of Christians, to bless and guard all Catholics in China, and we pray for the gift of God’s peace on the people of China.”

POPE FRANCIS’ MESSAGE
TO THE CHINESE CATHOLICS AND THE UNIVERSAL CHURCH

The Pope’s prayer for China

In the name of the whole Church, I beg the Lord for the gift of peace, and I invite all to join me in invoking the maternal protection of the Virgin Mary.

Mother of Heaven, hear the plea of your children as we humbly call upon your name!

Virgin of Hope, we entrust to you the journey of the faithful in the noble land of China. We ask you to present to the Lord of history the trials and tribulations, the petitions and the hopes of all those who pray to you, O Queen of Heaven!

Mother of the Church, we consecrate to you the present and the future of our families and our communities. Protect and sustain them in fraternal reconciliation and in service to the poor who bless your name, O Queen of Heaven!

Consolation of the Afflicted, we turn to you, for you are the refuge of all who weep amid their trials. Watch over your sons and daughters who praise your name; make them one in bringing the proclamation of the Gospel. Accompany their efforts to build a more fraternal world. Grant that they may bring the joy of forgiveness to all whom they meet, O Queen of Heaven!

Mary, Help of Christians, for China we implore days of blessing and of peace. Amen.

Evangelisation involves a deep love for the culture of a people

The Society of Jesus in China has a very long history which began several centuries ago – 500 years – with Fr. Matteo Ricci. In relation to the historic agreement, the director of the well-known Jesuit magazine “Civiltà Cattolica”, Father Antonio Spadaro, says:

“For the Jesuits, this agreement means a lot because we say that China is in the heart of each Jesuit. Matteo Ricci was educated in the Renaissance culture and, absorbing European culture, decided to go to China and this – his formation – allowed him to enter into dialogue with the culture of this great country: he fell in love with it, it absorbed him. The Jesuits who came after him developed it, learned from this culture, including Confucianism, and passed it on to Europe. That is to say, in some way, they brought the assimilation of Chinese culture to Europe.

It is moving to see how the evangelisation carried out by these early Jesuits involved a deep love for the culture of a people. Therefore, their desire was not that of a comprehensive evangelisation or a cultural mission, but rather the desire to know a people and their ideas. I was also impressed by the fact that Global Times, an official Chinese newspaper, on the day that the agreement was signed between China and the Holy See, described Pope Francis as “the first Jesuit Pope” and connected him directly to Matteo Ricci, saying that this man, like his predecessor, had and has a very flexible and dynamic relationship with evangelisation, capable of loving their people. This impressed me because it is exactly the meaning of the Agreement: build trust, love a people.”

The mission of internationality

Schoenstatt is an international family [only available in Spanish]. It has expanded, seminally or generously, in many countries, continents and cultural spaces.

Schoenstatt is international because it promotes a relationship between peoples and facilitates mutual enrichment.

“Internationality” means the ability to accept global tensions as a challenge to the unity in diversity. All plurality creates tensions that can be creative or destructive to life. They can be creative to the extent that a people, encouraging each other, complement each other in their being and purpose. They can be negative when they try to cancel each other out by not recognising the reality of membershop or despising and eliminating the other. Internationality overrides infertile and destructive tendencies of globalisation and transforms them into creators of peace and humanitarian and social growth.

The attitude of deep respect for each people, race and culture reminds us Fr. Kentenich’s attitude. One of his recommendations is:

“Those who work abroad should treat the national feeling of the people who are being formed, because they are vulnerable. Adapt to their ways, customs and langauge and love the people wholeheartedly“. (1949)