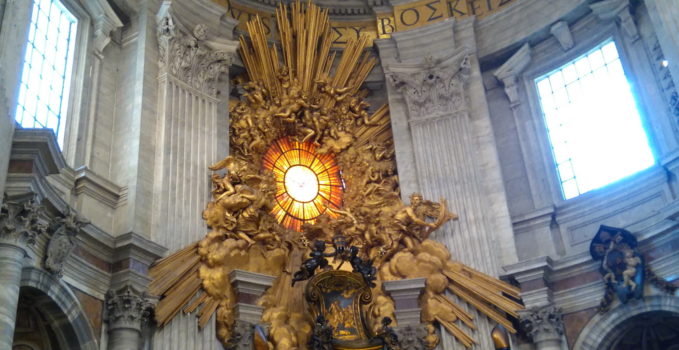 A life of witness: completely focused on going forward…celebrating the feast of St. Peter and St. Paul with Francis in Rome

“I never imagined being here,” said Mercedes MacDonough. “I still can’t believe I’m here at the Holy Father’s Mass in St. Peters on the feast of Sts. Peter and Paul.” With love and emotion, she raises her pilgrim mother and a small cross of the Lord of the Miracles of Salta, Argentina, which she would later take to Room 101 at the Fr. Kentenich House in Belmonte, the “Argentina” room.

It is 29 June, a Wednesday, but her dream to attend Pope Francis’ general audience did not come true because there is no audience that day, because 29 June is the biggest feast day in the Vatican after Easter and Christmas, explains Fr. Simon Donnelly, from the Secretariat of State.  He able to get passes for two ladies from his old parish in South Africa and for the small Argentinean delegation that came to Rome to bring Argentina’s symbols to Belmonte. Entering the Vatican, we see the new archbishop of Havana (several Pilgrim Mothers for Cuba were sent via the Bishop’s Office).  We were united in the joy, solemnity, and internationality of this festive Mass during which new archbishops were invested. 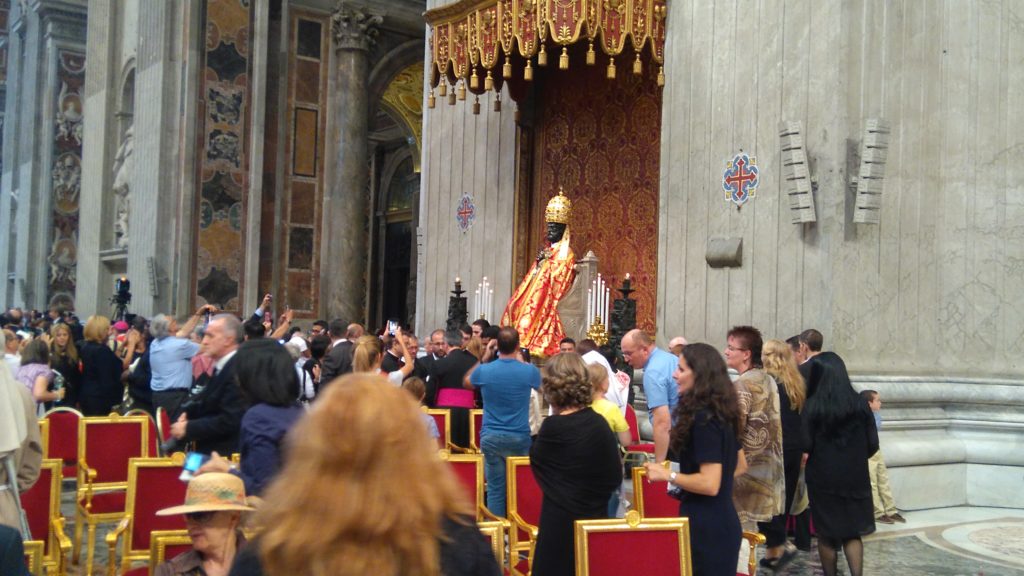 After Mass, Fr. Simon Donnelly gave us a brief guided tour of St. Peter’s – an experience like no other! We are below the majestic dome with the striking inscription: “You are Peter…” We prayed over the tomb of St. Peter.  Yes, it really is the tomb of St. Peter despite all the centuries-old scientific and theological doubts, remembered by pilgrims who always desired to be closer to the place where the first Church’s first Pope rests.  Later, Fr. Simon tells us the story of the discovery of the tomb of St. Peter and that Peter, like many of the other martyrs, saw the obelisk that today can be found in St. Peter’s Square.  For at least one member of the group, his image of the Vatican and those of work it changed dramatically that day.  After expressing their thanks, Fr. Simon said with all simplicity: “That is why we are here, to serve the pilgrims…” 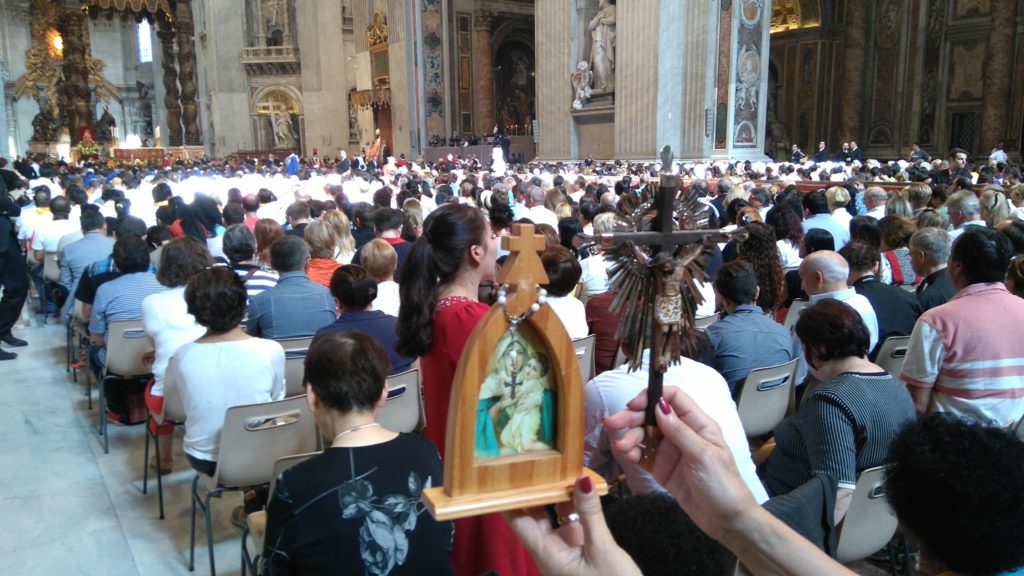 At the end of Mass, the Holy Father turned towards the image of the Virgin Mary, praying the “Sub tuum praesidium” (We fly to your protection, o Holy Mother of God…), probably the Church’s oldest Marian prayer. Thanks to the book by Fr. Alexandre Awi (She is my mother, Editorial Patris Chile and Argentina [English translation is on the way]), we know that this is the Holy Father’s favourite prayer, and that he prays it at least twice a day.  We united in his prayer, renewing our covenant solidarity with him and our commitment for a Schoenstatt and Church that goes out, with open hearts and minds …in this moment and a few minutes later, in front of the “Mater Ecclesiae” altar in St. Peter’s, the unique attachment with our international “Matri Ecclesiae” shrine in Belmonte. Attachment and commitment.

What Pope Francis says about the life of the apostle is also true for us, the members of a Movement that calls itself apostolic:

We can see the whole life of the Apostle in terms of “going out” in service to the Gospel. Paul’s life was utterly projected forward, in bringing Christ to those who did not know him, and then in rushing, as it were, into Christ’s arms, to be “saved for his heavenly kingdom”

The word of God in today’s liturgy presents a clear central contrast between closing and opening. Together with this image we can consider the symbol of the keys that Jesus promises to Simon Peter so that he can open the entrance to the kingdom of heaven, and not close it before people, like some of the hypocritical scribes and Pharisees whom Jesus reproached (cf. Mt 23:13).

The reading from the Acts of the Apostles (12:1-11) shows us three examples of “closing”: Peter is cast into prison; the community gathers behind closed doors in prayer; and – in the continuation of our reading – Peter knocks at the closed door of the house of Mary, the mother of John called Mark, after being set free.

In these three examples of “closing”, prayer appears as the main way out. It is a way out for the community, which risks closing in on itself out of persecution and fear.  It is a way out for Peter who, at the very beginning of the mission given him by the Lord, is cast into prison by Herod and risks execution.  And while Peter was in prison, “the church prayed fervently to God for him” (Acts 12:5).  The Lord responds to that prayer and sends his angel to liberate Peter, “rescuing him from the hand of Herod” (cf. v. 11). Prayer, as humble entrustment to God and his holy will, is always the way out of our becoming “closed”, as individuals and as a community. It is always the eminent way out of our becoming “closed”.

Paul too, writing to Timothy, speaks of his experience of liberation, of finding a way out of his own impending execution. He tells us that the Lord stood by him and gave him strength to carry out the work of evangelizing the nations (cf. 2 Tim 4:17). But Paul speaks too of a much greater “opening”, towards an infinitely more vast horizon. It is the horizon of eternal life, which awaits him at the end of his earthly “race”. We can see the whole life of the Apostle in terms of “going out” in service to the Gospel. Paul’s life was utterly projected forward, in bringing Christ to those who did not know him, and then in rushing, as it were, into Christ’s arms, to be “saved for his heavenly kingdom” (v. 18).

Let us return to Peter. The Gospel account (Mt 16:13-19) of his confession of faith and the mission entrusted to him by Jesus shows us that the life of Simon, the fishermen of Galilee – like the life of each of us – opens, opens up fully, when it receives from God the Father the grace of faith.  Simon sets out on the journey – a long and difficult journey – that will lead him to go out of himself, leaving all his human supports behind, especially his pride tinged with courage and generous selflessness. In this, his process of liberation, the prayer of Jesus is decisive: “I have prayed for you [Simon], that your own faith may not fail” (Lk 22:32). Likewise decisive is the compassionate gaze of the Lord after Peter had denied him three times: a gaze that pierces the heart and brings tears of repentance (cf. Lk 22:61-62). At that moment, Simon Peter was set free from the prison of his selfish pride and of his fear, and overcame the temptation of closing his heart to Jesus’s call to follow him along the way of the cross.

I mentioned that, in the continuation of the passage from the Acts of the Apostles, there is a detail worthy of consideration (cf. 12:12-17). When Peter finds himself miraculously freed from Herod’s prison, he goes to the home of the mother of John called Mark. He knocks on the closed door and a servant by the name of Rhoda comes. Recognizing Peter’s voice, in disbelief and joy, instead of opening the door, she runs to tell her mistress. The account, which can seem comical, and which could give rise to the “Rhoda complex”, makes us perceive the climate of fear that led the Christian community to stay behind closed doors, but also closed to God’s surprises.  Peter knocks at the door. Behold! There is joy, there is fear… “Do we open, do we not?…”. He is in danger, since the guards can come and take him.  But fear paralyzes us, it always paralyzes us; it makes us close in on ourselves, closed to God’s surprises. This detail speaks to us of a constant temptation for the Church, that of closing in on herself in the face of danger. But we also see the small openings through which God can work. Saint Luke tells us that in that house “many had gathered and were praying” (v. 12). Prayer enable grace to open a way out from closure to openness, from fear to courage, from sadness to joy. And we can add: from division to unity. Yes, we say this today with confidence, together with our brothers from the Delegation sent by the beloved Ecumenical Patriarch Bartholomew to take part in the celebration of the Holy Patrons of Rome. Today is also a celebration of communion for the whole Church, as seen by the presence of the metropolitan archbishops who have come for the blessing of the pallia, which they will receive from my representatives in their respective sees.

May Saints Peter and Paul intercede for us, so that we can joyfully advance on this journey, experience the liberating action of God, and bear witness to it before the world. 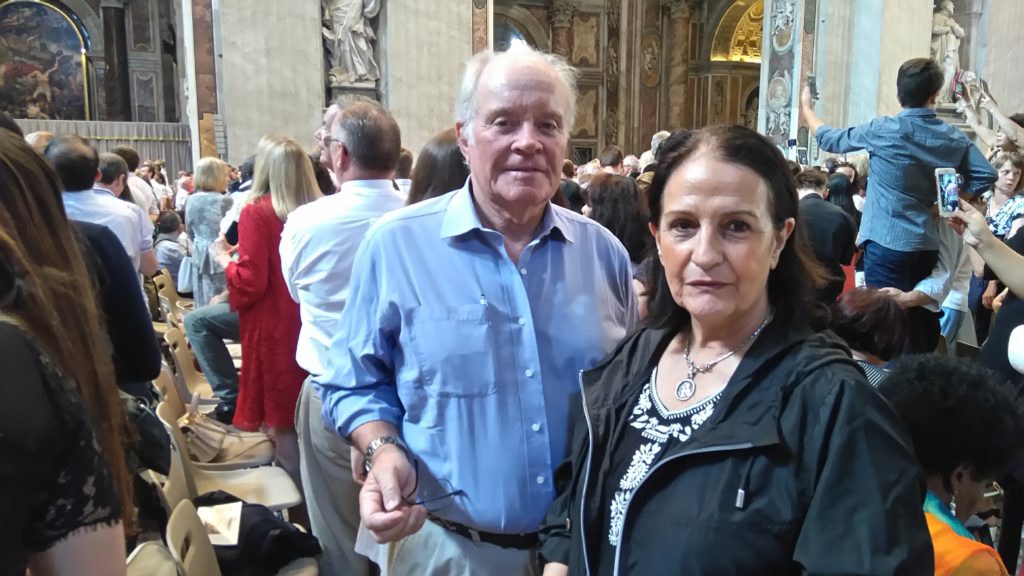