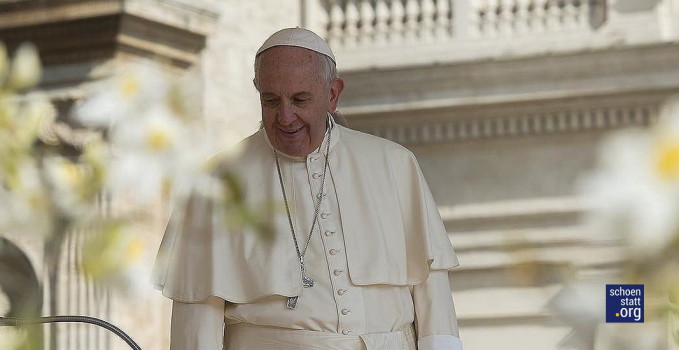 The Jubilee Audience on Saturday 14 May took place under a deluge of rain, but this did not stop thousands of pilgrims from crowding St. Peters’ Square to listen to Pope Francis’ catechesis, this time on piety.

It is not a very nice day, but you are brave and you came have come despite the rain. Thank you! This audience is taking place in two locations: the sick are in the Paul VI Hall because of the rain. They are more comfortable there and are following us on the jumbo screen; and we are here. We are together… and I suggest that you greet them with a round of applause. It’s not easy to applaud holding an umbrella in your hand!

Among the many aspects of mercy, there is one which consists in feeling compassion or pity for those who need love. Pietas — piety — is a concept from the Greco-Roman world where, however, it indicated a kind of submission to superiors: above all, devotion due to the gods, then filial respect for one’s parents, the elderly in particular. Today, however, we must be careful not to identify piety with the fairly widespread pietism, which is only a superficial emotion and offends the dignity of others. Similarly, piety should not be confused with the compassion that we feel for the animals that live with us; indeed, it happens that at times we feel this sentiment for animals, and are indifferent to the suffering of brothers and sisters. How often we see people who are so attached to their cats or dogs that they leave their neighbour without help, a neighbour in need…. This is not right.

The piety that we wish to talk about is a manifestation of God’s mercy. It is one of the seven gifts of the Holy Spirit, whom the Lord offers to his disciples to render them “docile in readily obeying divine inspirations” (Catechism of the Catholic Church, n. 1831). Many times the Gospel refers to the spontaneous cry that the sick, of those who are possessed, poor or afflicted people addressed to Jesus: “Have mercy” (cf. Mk 10:47-48; Mt 15:22, 17:15). Jesus responded to all with his gaze of mercy and the comfort of his presence. In those invocations for help or requests for mercy, each person also expressed his or her faith in Jesus, calling him ‘Teacher’, ‘Son of David’ and ‘Lord’. They perceived that there was something extraordinary about Him, that could help them to emerge from their state of distress. They perceived in Him the love of God himself. Even if the people were crowding around him Jesus was aware of those cries for mercy and he was moved to compassion, especially when he saw people suffering and wounded in their dignity, as in the case of the haemorrhaging woman (cf. Mk 5:32). He called her to trust in Him and in his Word (cf. Jn 6:48-55). For Jesus, feeling compassion is the same as sharing in the distress of those he meets, but at the same time, it is also getting involved in a personal way so that it might be transformed into joy.

We too are called to cultivate within us attitudes of compassion before the many situations of life, to shake off the indifference that impedes us from recognizing the need of the brothers and sisters who surround us and to free ourselves from the slavery of material wellbeing (cf. 1 Tim 6:3-8).

Let us look to the example of the Virgin Mary, who takes care of each one of her children and is for us believers the icon of compassion. Dante Alighieri expresses it in the prayer to Our Lady in Paradiso: “In you compassion is, in you is pity, […] in you is every goodness found in any creature (XXXIII, 19-21). Thank you.