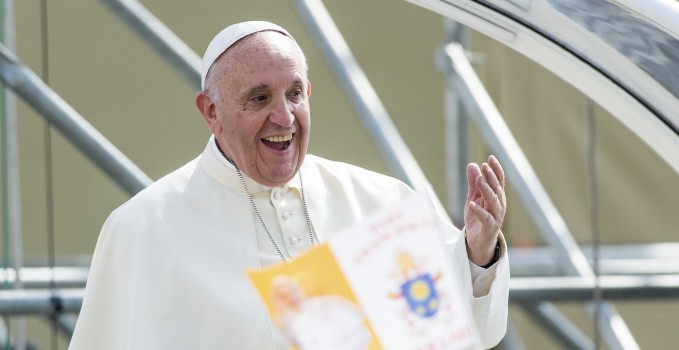 The right to rest, pension, assistance to mothers, among other labour rights, “based on the nature of the human person and on his transcendent dignity” were the key themes of Pope Francis’ address on Saturday, 7 September, in St. Peter’s Square, to 23,000 members of the Italian National Institute for Social Security (INPS) — on the same day when some 130 participants of the CIEES (Iberian-American Congress for Schoenstatt Executives and Businesspeople) met in Monterrey, Mexico to discuss the topic of living a covenant culture in companies by focusing on the person, their well-being and their family.

“Man must not be forgotten: this is the imperative,” said Pope Francis. “Man must be loved and served with care, responsibility and availability. To work those who, and not those who would like to do so but cannot. And to do so, not as a work of solidarity but as a duty of justice and subsidiarity. Support the weakest, so that no one lacks the dignity and freedom to live an authentically human life.”

“What a great message for the CIEES now,” commented Carlos Barrio and Lipperheide, the president of CIEES Argentina. “The family of each member of the company must be included in the company’s concerns, and not just the worker in isolation. In this order of ideas, it is necessary to also look at an “organic salary.” If we only measure salary on market value, then I believe that we will only have a mechanistic view. We cannot coherently say that we value the family if we pay salaries that do not allow the family to sustain themselves in a dignified manner.”

The Pope’s Address to the National Institute of Social Security

With earnest cordiality I greet you, dependents and directors of the National Institute of Social Security, gathered here in audience for the first time in the secular history of the entity. Thank you so much! Thank you for your presence – you are really numerous! – and thank you to your President for his courteous words.

You carry out at several levels the task of protecting rights linked to the exercise of work; rights based on the nature of the human person and on his transcendent dignity. Entrusted in a particular way to your concern is, what I would like to describe as, the protection of the right to rest. I am referring not only to that rest that is upheld and legitimized by an ample series of social services (from the weekly day of rest to holidays – here every worker has a right: cf. John Paul II, Encyclical Letter Laborem Exercens, 19) but also and above all to a dimension of the human being that is not lacking in spiritual roots and for which you also, on your part, are responsible.

God called man to rest (cf. Exodus 34:21; Deuteronomy 5:12.15) and He himself wants to be participant in the seventh day (cf. Exodus 31:17; Genesis 2:2). In the language of faith, therefore, rest is a human and divine dimension at the same time. But with a unique prerogative: that of not being a simple abstention of ordinary toil and commitment, but an occasion to live fully one’s creatureliness, raised to filial dignity by God himself. Therefore, the need to “sanctify” rest (cf. Exodus 20:8) is linked to that re-proposed weekly by Sunday – a time that enables one to take care of family, cultural, social and religious life (Second Ecumenical Vatican Council, Pastoral Constitution Gaudium et Spes, 67).

You are also, in a certain sense, collaborators of the just rest of God’s children. In the multiplicity of services that you render to society, both in terms of care and security, you contribute to lay the bases so that rest can be lived as a genuinely human dimension and, therefore, open to the possibility of a living encounter with God and others.

This, which is an honor, becomes at the same time a burden. In fact, you are called to face ever more complex challenges. They stem from today’s society, with the criticality of its balances and the fragility of its relations, from the world of work, plagued by occupational insufficiency and the precariousness of the guarantees it is able to offer. And if one lives like this, how can one rest? Rest is the right we all have when we have work; however, if the situation of unemployment, social injustice, black labor, the precariousness of work is so strong, how can one rest? What should we say? We can say it is shameful!. “Ah, you want to work?” – “Yes!” –. “Very good. Let’s come to an agreement: you begin to work in September but until July, and, after July, August and part of September you don’t eat and you don’t rest.” This is happening today! And it is happening today in the whole world. And here, it is also happening today in Rome! Rest, because there is work, otherwise, one cannot rest.

Up until recently it was common to associate retirement with reaching the so-called third age, in which to enjoy a merited rest and offer wisdom and counsel to the new generations. The contemporary age has sensibly changed these rhythms. On one hand, the eventuality of rest has been anticipated, sometimes diluted over time, sometimes renegotiated to aberrant extremes, so that it perverts the very hypothesis of retirement. On the other hand, the need for care remained, both for those who lost or never had work, as well as for those forced to stop working for various reasons. If one interrupts one’s work health care collapses….

Your difficult task is to see that indispensable subventions are not lacking for the subsistence of unemployed workers and their families. Among your priorities, special care for female workers must not be lacking, as well as maternity care, which must always protect new life and those who serve it daily. Protect women, the work of women! Insurance for old age, sickness, accidents linked to work must not be lacking. The right to a pension must not be lacking and I underline the right – a pension is a right! – as it is about this. Be conscious of the lofty dignity of each worker, to whose service your work is dedicated. By supporting their income during and after their time of work you contribute to the quality of their commitment as investment for a life to the measure of man.

Moreover, to work means to prolong God’s work in history, contributing to it in a personal, useful and creative way (cf. Ibid., 34). By supporting work you support this work itself. And, in addition, by guaranteeing a fitting subsistence to those who are forced to stop working, you reaffirm the most profound reality: work, in fact, cannot be a mere cog in the perverse mechanism that grinds resources to obtain ever greater profits. Hence, work cannot be prolonged or reduced in function of the earnings of a few and of productive forms that sacrifice values, relations and principles. This is true for the economy in general, “can no longer turn to remedies that are a new poison, such as attempting to increase profits by reducing the work force and thereby adding to the ranks of the excluded” (Apostolic Exhortation Evangelii Gaudium, 204). And it is true, analogously, for all social institutions, whose principle, subject and end is and must be the human person (cf. Second Vatican Ecumenical Council, Pastoral Constitution Gaudium et Spes, 25). His dignity can never be harmed, not even when he ceases to be economically productive.

Some of you might think: “But how strange this Pope is: first he speaks of rest, and then he says all these things about the right to work!” They are connected things! True rest comes precisely from work! One can rest when one is sure of having a secure job, which gives one dignity, to oneself and to one’s family. And one can rest when in old age one is sure of having a pension, which is a right. Both are connected: true rest and work.

Man must not be forgotten: this is the imperative. Man must be loved and served with care, responsibility and availability. To work those who, and not those who would like to do so but cannot. And to do so, not as a work of solidarity but as a duty of justice and subsidiarity. Support the weakest, so that no one lacks the dignity and freedom to live an authentically human life.

Thank you so much for this meeting. I invoke upon each of you and upon your families the Lord’s blessing. I assure you of my remembrance in prayer and I ask you, please, to pray for me.