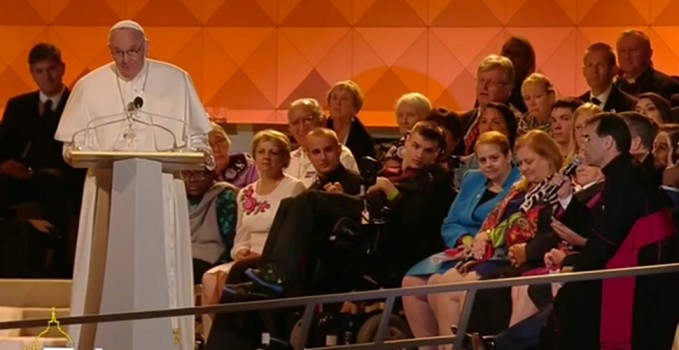 FRANCIS IN THE UNITED STATES •

Life enkindles life. A key expression by Fr. Kentenich, not based only on education, but also pedagogy, and of course, communication. That is the difference between the communication of life, which is what interests people, and institutional communication that serves only those who publish it.

Life enkindles life. Francis shows this with each word, each gesture, but above all, in moments of real, authentic testimony (as we know, not everything that calls itself testimony is really this) that compel him set aside his prepared speeches and to speak from the heart based on the atmosphere around him. He is not afraid to encounter reality. On the contrary. It appears that he breathes it in deeply…and breathes it out after allowing it to move through his pastoral and fatherly soul and heart. Another definition, from Fr. Kentenich (for a change) about communication in covenant.

This is what we experienced the night of the vigil of the World Meeting on Families. His tiredness was forgotten. He spoke in his native Spanish.

“It was a spectacular ceremony, even though it was a bit excessive, especially for Bergoglio, whose health may be affected during these days,” commented Spanish journalist Jesús Bastante. “He appeared to be very tired…before he spoke. At that moment, Francis transformed. He once again became the Pope of smiles and hugs, with a firm and vibrant voice, which defended the beauty of families that “brings us to God” and all those who give witness that “family life is something worthwhile,” and that “society grows stronger and better, it grows in beauty and it grows in truth, when it rises on the foundation of the family.”

“Simply extraordinary. Pope Francis’ words touch the hearth. They made me think, made me cry and made me laugh. He is the conscience of the world,” stated an ACIprensa commentary.

“He spoke Spanish freely, his translator did all he could to keep up with the rhythm of the series of words and energy,” commented the German service of Radio Vatican. “A few times during the afternoon, it appeared that the spectacle would be more important than the content. The Pope was able to change this situation completely and the rock star once again became the charismatic pastor.” Text of the Holy Father’s address at the vigil for the Festival of Families, 25.09.2015

I thank all of you. Those who spoke to us and the presence of everyone here, which is itself a witness. A truthful witness that family life is something worthwhile, and that a society grows stronger and better, it grows in beauty and it grows in truth, when it rises on the foundation of the family.

A young person once asked me – you know how young people ask hard questions! – “Father, what did God do before he created the world?” Believe me, I had a hard time answering that one. I told him what I am going to tell you now. Before he created the world, God was in love, because God is love. The love he had within himself, the love between the Father and the Son, in the Holy Spirit, was so great, so overflowing – I’m not sure if this is theologically precise, but you will get what I am saying – that love was so great that God could not be selfish. He had to go out from himself, in order to have someone to love outside of himself. So God created the world. God made this wonderful world in which we live and which, since we are not too smart, we are now in the process of destroying. But the most beautiful thing God made – so the Bible tells us – was the family. He created man and woman. And he gave them everything. He entrusted the world to them: “Grow, multiply, cultivate the earth, make it bear fruit, let it grow”. All the love he put into that marvelous creation, he entrusted to a family.

Let’s go back a bit. All the love God has in himself, all the beauty God has in himself, all the truth God has in himself, he entrusts to the family. A family is truly a family when it is capable of opening its arms to receive all that love. Of course the garden of Eden is long gone; life has its problems; men and women – through the wiles of the devil – experienced division. And all that love which God gave us was practically lost. And in no time, the first crime was committed, the first fratricide. Brother kills brother: war. God’s love, beauty and truth, and on the other hand the destructiveness of war: we are poised between those two realities even today. It is up to us to choose, to decide which way to go.

But let’s go back. When the man and his wife went astray and walked away from God, God did not leave them alone. Such was his love. So great was his love that he began to walk with mankind, he began to walk alongside his people, until the right time came and then he gave the greatest demonstration of love: his Son. And where did he send his Son? To a palace, to a city, to an office building? He sent him to a family. God came into the world in a family. And he could do this because that family was a family with a heart open to love, a family whose doors were open. We can think of Mary, a young woman. She couldn’t believe it: “How can this be?” But once it was explained to her, she obeyed. We think of Joseph, full of dreams for making a home; then along comes this surprise which he doesn’t understand. He accepts, he obeys. And in the loving obedience of this woman, Mary, and this man, Joseph, we have a family into which God comes. God always knocks on the doors of our hearts. He likes to do that. He goes out from within. But do you know what he likes best of all? To knock on the doors of families. And to see families which are united, families which love, families which bring up their children, educating them and helping them to grow, families which build a society of goodness, truth and beauty.

We are celebrating the festival of families. The family has a divine identity card. Do you see what I mean? God gave the family an identity card, so that families could be places in our world where his truth, love and beauty could continue to take root and grow. Some of you may say to me: “Father, you can say that because you’re not married!”. Certainly, in the family there are difficulties. In families we argue. In families sometimes we throw dishes. In families children cause headaches. I’m not going to say anything about mothers-in-law! Families always, always, have crosses. Always. Because the love of God, the Son of God, also asked us to follow him along this way. But in families also, the cross is followed by resurrection, because there too the Son of God leads us. So the family is – if you excuse the word – a workshop of hope, of the hope of life and resurrection, since God was the one who opened this path. Then too, there are children. Children are hard work. When we were children, we were hard work. Sometimes back home I see some of my staff who come to work with rings under their eyes. They have a one- or two-month-old baby. And I ask them: “Didn’t you get any sleep?” And they say: “No, the baby cried all night”. In families, there are difficulties, but those difficulties are resolved by love. Hatred doesn’t resolve any difficulty. Divided hearts do not resolve difficulties. Only love is capable of resolving difficulty. Love is a celebration, love is joy, love is perseverance.

I don’t want to keep on talking because it will go on too long, but I did want to stress two little points about the family. I would ask you to think about them. We have to care in a special way for children and for grandparents. Children and young people are the future; they are our strength; they are what keep us moving forward. They are the ones in whom we put our hope. Grandparents are a family’s memory. They are the ones who gave us the faith, they passed the faith on to us. Taking care of grandparents and taking care of children is the sign of love – I’m not sure if it is the greatest, but for the family I would say that it is the most promising – because it promises the future. A people incapable of caring for children and caring for the elderly is a people without a future, because it lacks the strength and the memory needed to move forward. The family is beautiful, but it takes hard work; it brings problems. In the family, sometimes there is fighting. The husband argues with the wife; they get upset with each other, or children get upset with their parents. May I offer a bit of advice: never end the day without making peace in the family. In the family the day cannot end in fighting. May God bless you. May God give you strength. May God inspire you to keep moving forward. Let us care for the family. Let us defend the family, because there our future is at stake. Thank you. God bless you, and please pray for me.