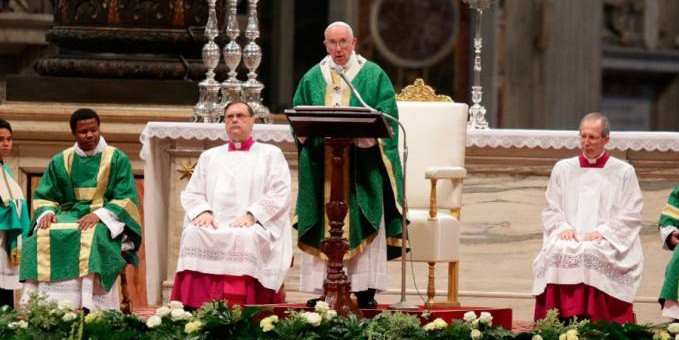 For God, marriage is not some adolescent utopia, but a dream without which his creatures will be doomed to solitude

SYNOD OF BISHOPS, by the schoenstatt.org editorial team •

Pope Francis celebrated the opening mass of the Synod of Bishops on the Family in St. Peter’s Basilica at the Vatican on 4 October. It was attended by the Synod Fathers and the others who were invited to the Assembly of Bishops that will meet until 25 October.

On the same day, a woman who was working as the caterer for the silver anniversary celebration of a Schoenstatt family commented to one of the schoenstatt.org collaborators: “After listening to the testimony of the couple’s five children as they spoke about their parents and their family life, I feel like joining the Catholic Church that I left so many years ago…” Evangelisation through life.

Complete text of Pope Francis homily at the Holy Mass for the opening of the Synod of Bishops:

This Sunday’s Scripture readings seem to have been chosen precisely for this moment of grace which the Church is experiencing: the Ordinary Assembly of the Synod of Bishops on the family, which begins with this Eucharistic celebration.

The readings centre on three themes: solitude, love between man and woman, and the family.

Adam, as we heard in the first reading, was living in the Garden of Eden. He named all the other creatures as a sign of his dominion, his clear and undisputed power, over all of them. Nonetheless, he felt alone, because “there was not found a helper fit for him” (Gen 2:20). He was lonely.

The drama of solitude is experienced by countless men and women in our own day. I think of the elderly, abandoned even by their loved ones and children; widows and widowers; the many men and women left by their spouses; all those who feel alone, misunderstood and unheard; migrants and refugees fleeing from war and persecution; and those many young people who are victims of the culture of consumerism, the culture of waste, the throwaway culture.

Today we experience the paradox of a globalized world filled with luxurious mansions and skyscrapers, but a lessening of the warmth of homes and families; many ambitious plans and projects, but little time to enjoy them; many sophisticated means of entertainment, but a deep and growing interior emptiness; many pleasures, but few loves; many liberties, but little freedom… The number of people who feel lonely keeps growing, as does the number of those who are caught up in selfishness, gloominess, destructive violence and slavery to pleasure and money.

Our experience today is, in some way, like that of Adam: so much power and at the same time so much loneliness and vulnerability. The image of this is the family. People are less and less serious about building a solid and fruitful relationship of love: in sickness and in health, for better and for worse, in good times and in bad. Love which is lasting, faithful, conscientious, stable and fruitful is increasingly looked down upon, viewed as a quaint relic of the past. It would seem that the most advanced societies are the very ones which have the lowest birth-rates and the highest percentages of abortion, divorce, suicide, and social and environmental pollution.

Love between man and woman

In the first reading we also hear that God was pained by Adam’s loneliness. He said: “It is not good that the man should be alone; I will make him a helper fit for him” (Gen 2:18). These words show that nothing makes man’s heart as happy as another heart like his own, a heart which loves him and takes away his sense of being alone. These words also show that God did not create us to live in sorrow or to be alone. He made men and women for happiness, to share their journey with someone who complements them, to live the wondrous experience of love: to love and to be loved, and to see their love bear fruit in children, as the Psalm proclaimed today says (cf. Ps 128).

This is God’s dream for his beloved creation: to see it fulfilled in the loving union between a man and a woman, rejoicing in their shared journey, fruitful in their mutual gift of self. It is the same plan which Jesus presents in today’s Gospel: “From the beginning of creation, ‘God made them male and female’. For this reason a man shall leave his father and mother and be joined to his wife, and the two shall become one flesh. So they are no longer two but one flesh” (Mk 10:6-8; cf. Gen 1:27; 2:24).

To a rhetorical question – probably asked as a trap to make him unpopular with the crowd, which practiced divorce as an established and inviolable fact – Jesus responds in a straightforward and unexpected way. He brings everything back to the beginning, to the beginning of creation, to teach us that God blesses human love, that it is he who joins the hearts of two people who love one another, he who joins them in unity and indissolubility. This shows us that the goal of conjugal life is not simply to live together for life, but to love one another for life! In this way Jesus re-establishes the order which was present from the beginning.

“What therefore God has joined together, let not man put asunder” (Mk 10:9). This is an exhortation to believers to overcome every form of individualism and legalism which conceals a narrow self-centredness and a fear of accepting the true meaning of the couple and of human sexuality in God’s plan.

For God, marriage is not some adolescent utopia, but a dream without which his creatures will be doomed to solitude! Indeed, being afraid to accept this plan paralyzes the human heart.

Paradoxically, people today – who often ridicule this plan – continue to be attracted and fascinated by every authentic love, by every steadfast love, by every fruitful love, by every faithful and enduring love. We see people chase after fleeting loves while dreaming of true love; they chase after carnal pleasures but desire total self-giving.

“Now that we have fully tasted the promises of unlimited freedom, we begin to appreciate once again the old phrase: “world-weariness”. Forbidden pleasures lost their attraction at the very moment they stopped being forbidden. Even if they are pushed to the extreme and endlessly renewed, they prove dull, for they are finite realities, whereas we thirst for the infinite” (Joseph Ratzinger, Auf Christus schauen. Einübung in Glaube, Hoffnung, Liebe, Freiburg, 1989, p. 73).

In this extremely difficult social and marital context, the Church is called to carry out her mission in fidelity, truth and love.

To carry out her mission in fidelity to her Master as a voice crying out in the desert, in defending faithful love and encouraging the many families which live married life as an experience which reveals of God’s love; in defending the sacredness of life, of every life; in defending the unity and indissolubility of the conjugal bond as a sign of God’s grace and of the human person’s ability to love seriously.

The Church is called to carry out her mission in truth, which is not changed by passing fads or popular opinions. The truth which protects individuals and humanity as a whole from the temptation of self-centredness and from turning fruitful love into sterile selfishness, faithful union into temporary bonds. “Without truth, charity degenerates into sentimentality. Love becomes an empty shell, to be filled in an arbitrary way. In a culture without truth, this is the fatal risk facing love” (Benedict XVI, Caritas in Veritate, 3).

And the Church is called to carry out her mission in charity, not pointing a finger in judgment of others, but – faithful to her nature as a mother – conscious of her duty to seek out and care for hurting couples with the balm of acceptance and mercy; to be a “field hospital” with doors wide open to whoever knocks in search of help and support; even more, to reach out to others with true love, to walk with our fellow men and women who suffer, to include them and guide them to the wellspring of salvation.

A Church which teaches and defends fundamental values, while not forgetting that “the Sabbath was made for man, not man for the Sabbath” (Mk 2:27); and that Jesus also said: “Those who are well have no need of a physician, but those who are sick; I came not to call the righteous, but sinners” (Mk 2:17). A Church which teaches authentic love, which is capable of taking loneliness away, without neglecting her mission to be a good Samaritan to wounded humanity.

I remember when Saint John Paul II said: “Error and evil must always be condemned and opposed; but the man who falls or who errs must be understood and loved… we must love our time and help the man of our time” (John Paul II, Address to the Members of Italian Catholic Action, 30 December 1978). The Church must search out these persons, welcome and accompany them, for a Church with closed doors betrays herself and her mission, and, instead of being a bridge, becomes a roadblock: “For he who sanctifies and those who are sanctified have all one origin. That is why he is not ashamed to call them brethren” (Heb 2:11).

In this spirit we ask the Lord to accompany us during the Synod and to guide his Church, through the intercession of the Blessed Virgin Mary and Saint Joseph, her most chaste spouse.